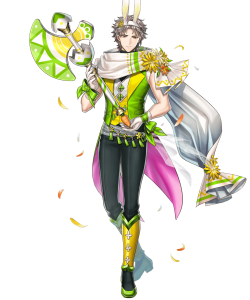 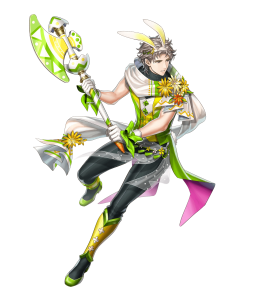 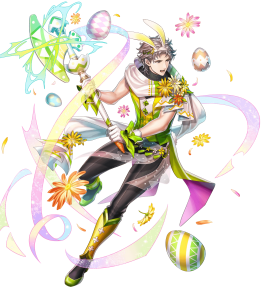 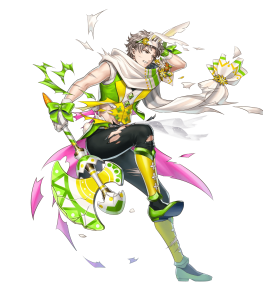 Whack You 'Til You're Scrambled (Higher-Investment Offense)

37/36 Atk and Speed isn't exceptionally extraordinary but is nevertheless a pretty solid offensive statline to start with. With investment, Saleh achieves a nice amount of follow-ups and follow-up avoidance, as well as dealing consistent damage across most builds.

Saleh can hop three spaces, allowing him to outmaneuver most units in other movement types as well as benefit from a pretty flexible attacking range. Additionally, cavalry units are allowed access to the famed Lull skill line, which can skew stat comparisons unconditionally in Saleh's favor. Finally, other cavalry allies can lend some nice exclusive support skews in the form of Hone Cavalry and the like.

An inheritable weapon which basically grants basically Atk/Spd +5 for basically no condition at all (the enemy unit has to be above 75% HP, which is a given seeing as all units start with 100% HP) is hard to say no to. The stars aligned and Saleh, fortunately, gets it as a default option. The fact that the axe also grants penalty neutralization to Atk/Spd while the in-combat stat boosts are active in both phases are also really good reasons to keep it in favor of other axes. However, Saleh can also opt for other great alternative weapons such as Plegian Axe, Deck Swabber, or Ninja Masakari for individual needs.

Copies of Saleh are obtainable through his respective Tempest Trials and the Heroic Grails shop after that ends. No Orbs are required to summon Saleh and all the competitive perks he comes with.

Saleh's horseriding status can prove inconvenient sometimes with the inability to traverse or get repositioned into terrain spaces such as trees, chasms, and cavalry trenches. He is also lacking in colorful inheritance options outside of Lull skills, especially Flashing Blade, Null Follow-Up, and more.

Does Saleh's statline seem familiar? You wouldn't be blamed too hard for making comparisons with him and the also-free, Tempest Trials-acquirable Plegian Kris, who sports an extremely similar statline with a few minor differences. In particular, Kris's stat advantage in Defense — having five more than Saleh in exchange for six Resistance points — helps him take on physical melee matchups overall more comfortably than Saleh would. The difference in Speed — one more than Saleh — is extremely minor but annoying to ignore given how otherwise similar in playstyle the two are. Both also cower in the sheer force that is Freyja, who sports superior offenses and built-in Distant Counter and damage reduction in one fairy queen-themed package.

For all the investment Saleh poured into his Resistance, it seems like he backed out mid-way, leaving it at only a rather decent base 28 by today's standards. Furthermore, having just 26 Defense bites a LOT when it comes to weathering physical hits, something Saleh will commonly put up with thanks to his playstyle and physical melee leanings. Needless to say, don't expect him to zero everything out like Pirate Veronica/Xander and Duessel.