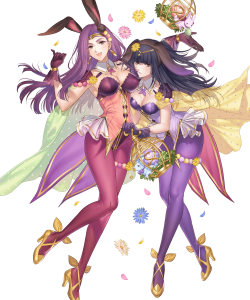 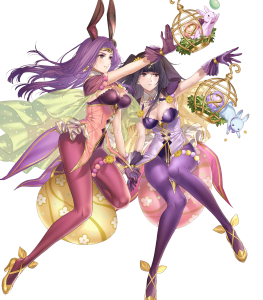 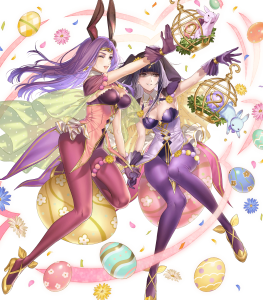 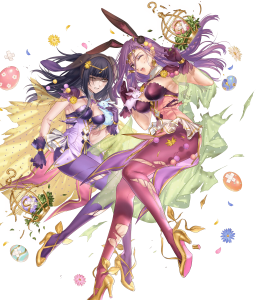 Spring Sonya and Tharja combine their magical prowess rather well in their exclusive Magic Rabbits, showcasing a fantastic hyper-offensive lean through the weapon’s cumulative effects.

Altogether, while it doesn’t have much in the way of utility (outside of specific use cases with Guidance or Ground Orders as mentioned previously), Magic Rabbits’ basket of goodies is plenty and distinguishes Spring Sonya as an extraordinarily mobile nuke who can burst through enemy health with grace and dexterity.

Although the scoring benefits of Harmonized Heroes are more subtle compared to Duo Heroes, Sonya’s Harmonized status comes with a few other accompanying perks that further inflate her general viability. Most notably, on top of contributing her stellar offensive capacity, she can enable the Duo’s Hindrance structure within Aether Raids Defense to shut down the Duo and Harmonized Skills of all challengers — and speaking of, her Harmonized Skill is pretty potent in its own right. Upon usage, Spring Sonya and any allies on the team from Fire Emblem Echoes: Shadows of Valentia or Awakening immediately receive +4 Atk/Spd during combat, a +6 visible Atk buff, and two Special charges for free (akin to her Magic Rabbits effect).

Having access to such a battery is pretty rare in itself (especially as it bears potential usage outside of the first turn or the start of one), and it may also bear a surprising impact on the course of battle if used properly. For instance, against a foe who can counter at range, Sonya can use her Skill to reactivate her own nuke instead of needing to engage to accumulate charges and turn around an otherwise unfavorable matchup — or she can exploit its benefits more supportively to aid allies reliant on Special charges, such as those wielding Galeforce or Special Spiral. It’s ultimately a flexible effect that can’t really go unappreciated, adding another layer of depth to Spring Sonya’s performance.

Befitting the damage-intensive nature of her weapon, Spring Sonya brings out all the stops in her festivities through staggering offensive values. With 42 Atk, 41 Spd, and access to four-point Assets in both to top it all off, her damage ceiling is undeniably solid even before Magic Rabbits kicks in — and once it does, unless her Special is deterred by effects like Pulse Smoke or Even Pulse Tie, this baseline grants Sonya entry into the ever-growing rank of units who probably should not be face-tanked.

Spring Sonya greatly appreciates the unhindered mobility that her flying status brings, as it allows for full optimization of her weapon’s warping effect to gain unprecedented reach. Further, this also comes with neat access to flier-exclusive skills like her default Spd/Res Hold for enhanced combat prowess, in addition to mobility-based abilities such as Guidance and Ground Orders to expand her team’s movement options as previously mentioned

Compared to every other movement type in the game, fliers are presently sorely lacking when it comes to skill availability, and those that are ranged suffer the brunt of this, particularly in terms of competitive B slots. In Spring Sonya’s case, even the most typically coveted option (that being S/R Far Trace) only has slight bearing in her combat through its in-combat debuff on her foe, as the 【Canto (Rem.)】effect usually won’t trigger at all if she warps via her PRF. Outside of Far Trace, the rest of her options aren’t nearly as impressive (namely, Wings of Mercy and Desperation) relative to skills like Special Spiral that would have greatly improved her battling.

Since Spring Sonya allotted such a huge portion of her stats towards Atk and Spd, her Def and Res were subsequently left extremely lacking, and her HP pool isn’t nearly high enough to make up the difference. This completely removes the possibility of Enemy Phase play (though her weapon wasn’t made for that anyway), but more importantly, means that Spring Sonya almost always runs the risk of being flat out OHKO’d if she fails to kill her opponent before they can counter — and since she can’t run Special Spiral to constantly ensure an initial Special activation for consistent OHKO’s, she becomes much less of a threat outside of turn one and when she activates her Harmonized Skill