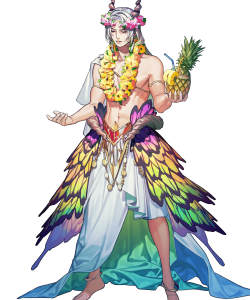 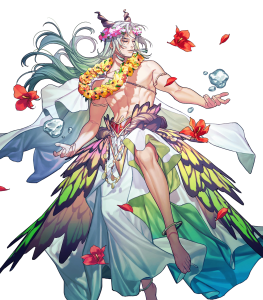 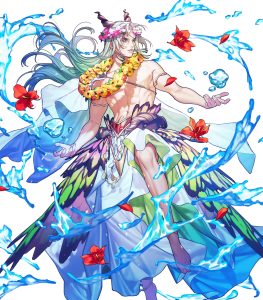 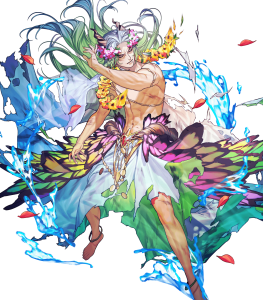 Just a normal summer… nothing to worry about. (Enemy Phase)

Hold on… why are there two Freyjas running towards me? (Player Phase)

Summer Freyr’s Raydream Horn is an extremely loaded weapon, giving him automatic follow-up attacks while inflicting a -6 Attack Debuff on the foe and granting him +6 Attack during combat as long as he has an ally within 2 spaces or he initiates combat, in addition to giving him an impact-esque effect and inflicting an additional -4 Attack and Defense when initiating while transformed. This weapon makes Freyr a threat on both phases as long as his easily fulfilled condition remains active, although in AR the leash requirement can leave him high and dry on Enemy Phase should his support unit be sniped(Legendary Sigurd says hi).

Freyr’s high base 38 Defense and 35 Resistance respectively give him an excellent baseline for taking hits on both sides of the spectrum, while his base Attack of 38 means he has little trouble dishing out pain himself.

Being popular enough to have a beach inflatable made out of your beast form is certainly a distinction... Or maybe Freyja had hers custom made? guess we’ll never know.

While Cavalry effective weaponry is uncommon outside of exclusive weapons such as Micaiah’s Thani, Freyr should be careful when engaging their users as many of them can inflict heavy damage to him even if they don’t KO him outright.

Thanks to Freyr’s terrible Speed, he’s completely reliant on his exclusive weapon to both perform follow-up attacks and prevent them, and Null Follow-up completely negates these effects, giving their user a much easier time taking Freyr on (Although Freyr can KO the Null-Follow up user in a single hit depending on the matchup thanks to his high Attack)

Yeah that's totally fair for a last match
Ran into 3 +10 F Edels today luckily Marth and Larcei was able to carry me to victory…
My 🦊 has finally reached his true potential
I was able to finally Pull my last merge for my NY! Kaden. I have 0 regrets on the…
Free GHB manuals
Besides me, who already had Ashnard, Petrine, Jorge and Flame Emperor at +10, does…
“The Time Has Come” +10 F!Lyon showcase!
“Now humans…” “Lament your fate…” “Weep for the dead…” “Despair for the living…” …
Sothis Pocus, Bylathus Pas! :feh_sothishook:
Sothis Pocus, Bylethus Pas! I summon thee: Warning: Sothis Pocus Bylathus Pas is a…
Read More