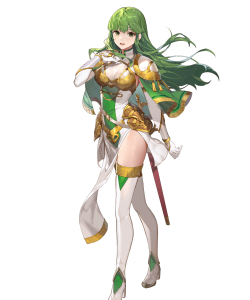 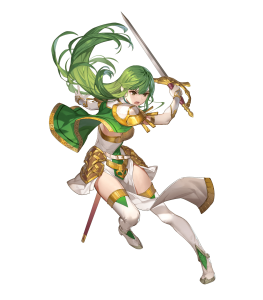 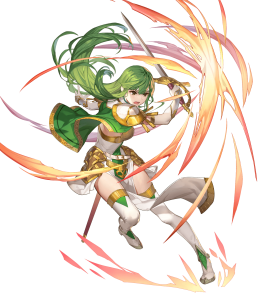 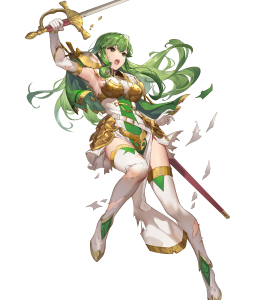 Nice Health You Got There… Would Be A Shame If I Depleted It! (Vantage)

I Wish the Pretty Pegasus Lady Was Real :Sadge: (Galeforce)

B Passive: Wings of Mercy / Hit and Run / Vantage

Ladyblade is a fantastically strong weapon that allows Valentian Palla to perform amazingly well. The bread and butter of the weapon is by far the Dual-Phase Brave, which allows her to attack twice in both phases. This, combined with her base Atk of 42, and superboon pushing her to 46, can help her reach high amounts of damage. Likewise, the innate Sorcery Blade means she can always target the lower of the foe’s defensive stats, which can help her secure kills much more easily. Finally, there’s the innate Canto, which can help her function more in the Player Phase.

Being a flier means Valentian Palla has access to the Rein line of skills. These skills can help Palla not only make Heavy Blade checks easier to secure but also increase her damage output by a fair amount.

Ladyblade having innate Sorcery Blade is great against foes with lopsided defenses. However, foes that have good mixed bulk will effectively negate the adaptive nature of Ladyblade. Likewise, Mystic Boost outright disables Sorcery Blade and similar kinds of effects.

Because Valentian Palla has lackluster Spd and Res, units that can use Damage Reduction skills (Spurn, Dragon Wall, etc.) will make it more difficult for her to take down those types of foes. One prevalent threat in Aether Raids is Nott who can take the damage from Valentian Palla thanks to her Moon-Twin Wing and finish her off on the second hit. However, it is possible to brute force through it with the proper support. That being said, any unit on Aether Raids Defense with Windsweep equipped will shut down her Enemy Phase prowess entirely and lead to her demise.

Despite having a relatively unique weapon, Valentian Palla still faces competition from other Dual-Phase Brave units. Several notable options include Laslow, Winter Altina, and Keaton, all three of which are Infantry and come with benefits that Valentian Palla lacks. While all three lack the adaptive nature of Ladyblade, their Infantry status means they can run Breath Sacred Seals, which allow them to output more damage more consistently with two-cooldown Specials as they don’t have to make Heavy Blade checks. Individually, each of them also has their own boons: Laslow having one of the highest Atk stats out of any Dual-Phase Brave unit as well as having the ability to Spd stack, Winter Altina with her Twin Blades which can negate Damage Reduction and arguably gives her some of the best matchups out of any unit of her kind, and Keaton with his true damage if he triggers a Special as well as the additional debuffs he inflicts on the foe, Tempo, and accelerated cooldown every time he lands a hit. Even so, Valentian Palla is still able to hold her own as the adaptive damage isn’t replicable by most units without some form of opportunity cost.

Can you stack winter rapier with atk/def unity?
Just the title, thinking about how to build the bulkiest boy, Roy lmao 3…
Feh Channel Feb 1 2023
https://www.youtube.com/embed/YVLWXSDneJM still watching it I’ll update with a summary…
AHR 2023
A bit early but… AHR is back Choose who joins the Voting Gauntlet in…
FE Heroes - 2022 - Revenue
Statista Fire Emblem Heroes revenue worldwide 2022 |…
How are we on Version 7?
(topic deleted by author) 1 post - 1 participant Read full…
Read More