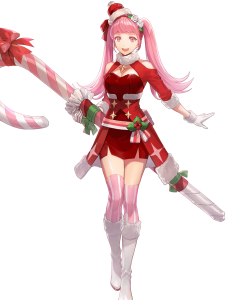 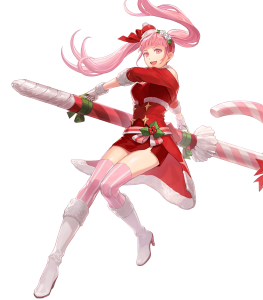 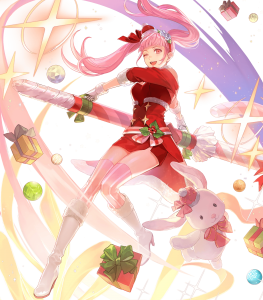 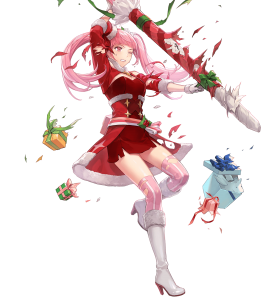 Her Bunny is Too Adorable (Player Phase Offensive)

Winter Hilda’s BST of 184 is exceedingly high, rendering it entirely unsurprising that her statline is accordingly quite good. With a solid HP pool and the majority of her other stats in the high 30’s, Hilda statline leaves very little to be desired, coming packed with good damage, strong innate ability to both perform and avoid doubles, and respectable durability.

Even her lowest stat, Resistance, can barely be considered middling—and even then, it can easily be improved with support and sufficient investment. Suffice it to say, when it comes to stats, Hilda covers all her bases fairly well.

In addition to providing a substantial BST boost (which also makes her a good choice for Colosseum scoring), Hilda’s armored status enables her to equip the notoriously powerful Fighter skills; these are all incredibly useful in cementing her already admirable combat performance. She also benefits from access to class-exclusive buff support.

Hilda’s great skill access—particularly in terms of B slot skills and weaponry—and well-rounded statline provides impressive build variety, making her incredibly malleable as she can be fine-tuned to best serve one’s preferred playstyle with relative ease.

Although being an armored unit comes with several substantial advantages, it does weigh Hilda down with some disadvantages as well. This includes a debilitating weakness to armor-effective damage and abysmal mobility, which can altogether inhibit her ease of use. However, these weaknesses are in no way unique to Hilda as they apply to armored units as a whole and can be mitigated relatively easily through careful play.

A rather inexpensive build; the idea is that with a +spd, spd refined Candy Cane+ and Even follow-up, we can naturally double and stop doubles with our speed. Speed smoke in the C slot also helps with this, and the Armor March seal helps with our poor 1 movement.

Recommended IVs +Atk, +Def / -Spd, -HP
Basically just a Galeforce build for her, with her Even Follow Up (you also could replace it with Bold Fighter if you don't like the turn condition) and a Brave Lance, Hilda should be hitting four times in a combat round, which will accelerate Galeforce considerably. The reduction to her attack should also be relatively minimal as long as the opponent isn't too considerably tanky (both strikes of BL+ add up to more than Candy Cane+, but the loss in her raw Atk stat won't be so helpful against def tanks)

Weapon: Brave Lance+
The two hits from this weapon stack with Even Follow-Up, which is what allows Hilda to strike four times and charge her special faster. It does mean replacing Candy Cane+, but I thought this was more fun to play with, and the rest of the build doesn't work so well without it.

Assist: Shove
I didn't see reason to change it, but feel free if you want to

Special: Galeforce
Of course, it's a Galeforce centered build. I've had some success with damage based skills like Astra as well, so if you wanted to you could switch to that or Moonbow and just go wild with the special activations using this build. Although personally I think Galeforce is the better option with this kit.

A: Atk/Def Form / Flexible
I recommend keeping Atk/Def Form, it's a pretty decent skill and it'll help to further increase Hilda's physical bulk when she runs into dangerous situations in battle, while still keeping her attack up for more offensive power. But, since this is a Galeforce build, I could understand where something like Atk/Def Solo could also work, but Atk/Def Form comes with her already. So I figure, if it ain't broke don't fix it.

B: Even Follow Up / Bold Fighter
Even Follow Up is kinda the crux of this build, and it's not going to be particularly easy to activate Galeforce without the free follow up attack you get from it. But again if you really don't like the turn condition, Bold Fighter is also an option.

C: Time's Pulse / Def Smoke
Time's Pulse is the ideal skill for this build, but I couldn't find it on the list smh. Hilda can only hit four times in combat with BL and Even Follow-Up, so Time's Pulse can take care of the one extra cool down charge. If you don't have it or don't want to use it on Hilda, Def Smoke is also a good budget choice for weakening your foes before using Galeforce.

S: Armored Boots
Just for getting around the map quicker. Galeforce is a lot less effective when your unit is confined to one space movement.

Boon: Atk/Spd/Res: while i think speed is better overall to allow her to double most enemies losing 3 speed for 4 attack from her superboon could be worth it depending on how if the speed of the common enemies she will be facing is low enough that she doubles regardless or if the extra attack is need to kill a common threat that she faces. Res can also work if you need it to survive some of the mages/ dragons she will face
Weapon: Gilt Fork: Gilt Fork has a similar effect as candy cane however since this build runs special fighter making the reduced enemy cooldown redundant gilt fork allows her to remove and atk and def penalty she might get. for the refine i chose speed to maximize the stat but other refines will work depending on which stat boost you think best helps her
Assist: Swap: this is just personal preference any assist skill that you prefer to run on her should work fine
Special: Noontime: on enemy phase with the help of special fighter she will have instant noontime on retaliation allowing for reliable sustain
A: Distant Counter: standard A skill for most enemy phase melee units however distant ward could be useful if you want to patch up her lower res or if you don't plan for her to be facing many bow or dagger units
B: Special Fighter: enables instant noontime on enemy phase while also preventing/slowing the opponents ability to use their own special
C: Joint Hone Atk: and joint hone or drive skill could work in the slot depending on which stat you want the boost for or which you have available to give her since being close to another ally is needed for her weapon's effect to activate. smoke skills are also useful primarily pulse smoke to prevent enemies with precharged specials from using them against her. armor march is another choice since she will need to be near another ally anyway and it would increase her movement however since only her or her ally would need armor march one should have it while the other has the joint skill of choice but note that if she is the one who will see combat more and you want a smoke skill armor march is better on her ally.
Seal: Swift Stance: swift stance is used for the extra speed while also patching up her res. Kestral stance can be used if you want the extra attack over res or Mirror stance can be used if you don't think you need the extra speed but want the attack and res. armor boots could be used if you want her to run without a second armor on your team or armor march can be used if you really need her and her partners c slots for other skills or for arena to maximize score