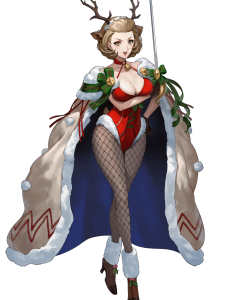 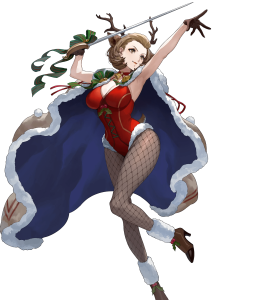 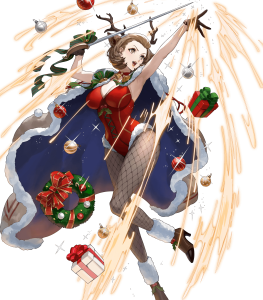 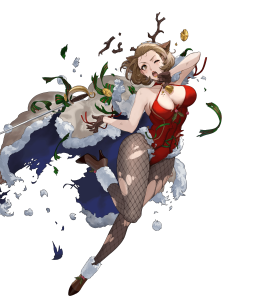 [Drunkenly Knocks Over Your Christmas Tree In Spanish] (Speedy Save)

New low-rarity armors are still somewhat of a rarity this day and age, and our questionably-dressed Professor is happy to both avoid the "demoted healer" pitfall and take center-stage with all sorts of armored class goodies:

A Season's Giving of Stats

With so many stat points to work with, Manuela outfits herself with a weirdly provocative outfit and strong overall investment in her Attack and Speed stats. Properly built, she avoids many natural follow-up attacks while being able to make her own without the help of certain Fighter skills (those are still pretty helpful, though!). Her defenses are also pretty solid, and in conjunction with her Speed, a refined weapon, and said skill investment, makes sure Manuela typically performs flexibly in any phase and isn't easy to take down in a snap.

The combination of Manuela's low orb cost per copy and obscenely high base stat total (which puts her in the near-maximum 190 scoring bin) also makes her a prime picking as a scorebot in modes that utilize Arena scoring. You can pretty much take most of the builds listed and tack on a high-scoring Rally and Special to seal the deal.

In other modes and general gameplay, she will usually do pretty well with her high stats as well as proper usage and skill investment.

Manuela's low movement due to her being armored is usually not a noticeable thing nowadays; helpful factors include Save skills encouraging nearness to teammates, as well as many ally-provided means of moving across the map, like Ash's Opening Retainer skill. It's still a notable weakness if you don't invest particularly highly in Manuela's team composition or need her to escape from unfavorable matchups.

As usual of her color and armor typing, physically tough blue units, armor-effective weaponry, or both will be certain to cut Manuela's performing act short.

Investing in Speed takes a sizable bite from Manuela's other stats compared to the conventional Save armor; 42 HP / 38 Def / 31 Res are solid to start out with but aren't quite up to the standards of normal tanky armors. On a typical day, Manuela will mostly rely on hard investment, technique, and natural Speed avoidance rather than brute force tanking, the latter of which is usually preferable on your average Save unit.

As far as the Sword Armor niche goes, Manuela faces some tough competition with a few older gents in her court. In particular, Arden, the Black Knight, and Zelgius typically make for pretty comparable and desirable tanky sword armors due to their non-seasonal accessibility and more convenient Special spamming options. In detail, Arden has way superior physical bulk and dual-phase Brave effect, while Zelgius and Black Knight can get a more potent Special in Black Luna running in less actions thanks to their refined Alondite.