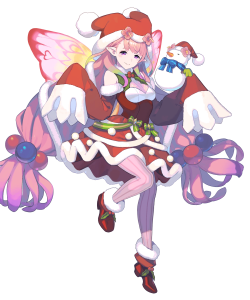 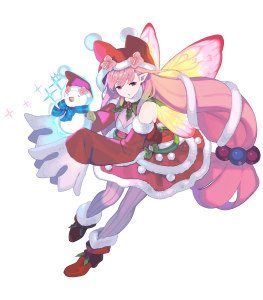 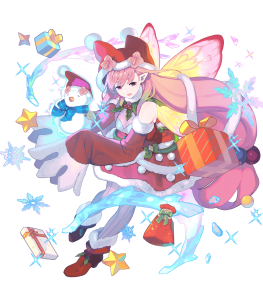 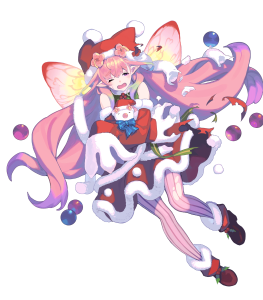 what do you MEAN fairies can’t go into hibernation??? (Defensive Tank / Support Hybrid)

based? based on what? (Damage Focus / Support Hybrid)

The festive daydreamer retains her base version’s signature Whimsical Dream, a uniquely elevated version of the already powerful Sing and Dance skills. Boasting effectively mapwide effects, Whimsical Dream grants Mirabilis’ desired ally an ample +5 visible Attack boost and debuffs the closest foe within four spaces by -5 Attack — and then it “spreads,'' applying the same buff to allies and debuff to enemies within two spaces of the original targets.

While this all may sound convoluted (as it sort of is), the end result is pretty simple to understand: with one usage, Winter Mirabilis can quickly boost her team’s damage output and weaken that of her foes with nearly pinpoint accuracy all on top of granting another action! Allies who depend on visible Attack checks (e.g. Heavy Blade, Kagero’s Dart, etc.) or debuffs (e.g. Broadleaf Fan) are sure to appreciate the fairy’s support in particular, but the effective 10 Attack differential she creates can aid essentially any composition given how hard it is to avoid.

Winter Mirabilis’ Dreamflake synergizes beautifully with Whimsical Dream and directly adds to the power of her debuffs, applying an additional -5 Attack to debilitated foes that stacks on top of her existing visible Atk debuff. This makes her well adept at tampering with enemy damage output through her actions, but the neat thing about Dreamflake is that she doesn’t necessarily have to use Whimsical Dream to leverage its effects — similarly to her original Flower of Ease, provided a foe is afflicted by any penalty, they automatically suffer from the weapon’s affliction.

Combined with its exceptionally wide area-of-effect, Dreamflake ensures Mirabilis can maintain a constant supportive presence from across the entire map and even before she begins casting her Assist.

The flier class is notorious for its assortment of movement-based mechanics that enhance the mobility of the wielder and their allies (i.e. Aerobatics, Flier Formation, Ground Orders, etc.), and Winter Mirabilis can fully maximize this quality thanks to her support focus; she can enable her allies from more advantageous positions than her infantry counterparts and her allies can in turn benefit from greater overall mobility and Player Phase dominance.

Winter Mirabilis’ values in Defense and Resistance are standout amongst her fellow refreshers and help safeguard her from being easily sniped, and her solid Attack is an appreciable bonus in case she ever needs to go on the offensive mid-battle to snipe remaining enemy health. Those looking for a bit of build variety can capitalize on this as well, as these stat values are just high enough that Winter Mirabilis can serve as a respectable combatant with enough investment — especially where her damage is concerned, given her access to the powerful Broadleaf Fan.

Her optimized Attack and defensive stats comes at rather substantial cost to her Speed; featuring a meek base Speed of 17, avoiding follow-up attacks is going to be a rare occurrence which in turn detracts from the impressiveness of her bulks since she’ll be taking more hits per engagement. This also hampers Winter Mirabilis’ offensive capacity somewhat since it makes her wholly reliant on landing OHKOs, though this in particular is more of a nitpick outside of aggressively-tuned builds.

While she undoubtedly reaps much from her flying status when it comes to her support capabilities, Winter Mirabilis’ combat potential is impeded due to how lacking the movement class is in overall skill accessibility — ranged fliers suffer from this most greatly — and by an accompanying weakness to effective damage, which yet again undermines her bulk. However, once again, this is really an issue for those wanting a refresher with a more offensive lean; otherwise, the sheer strength of her supportive presence makes this mostly inconsequential.