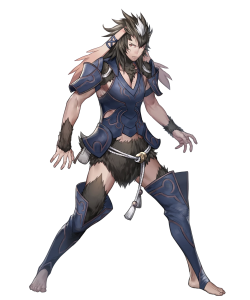 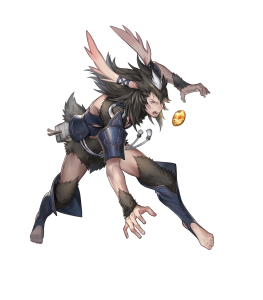 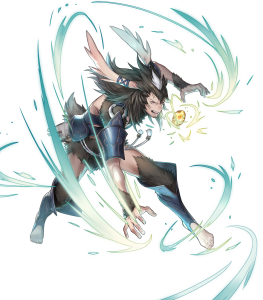 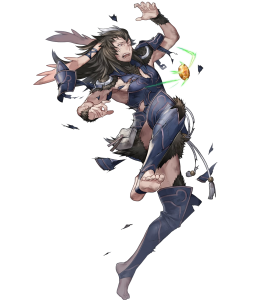 An offensively oriented build focusing solely on developing Yarne’s combat prowess in the Player Phase. A Speed Asset is ideal due to his reliance on follow-up attacks for his damage output though should it be unavailable, an Attack Asset makes for a worthwhile consideration as well.

Although Yarne’s base kit, statline, and inherent strengths as a cavalry beast unit do strongly encourage him to focus strictly on maximizing his offensive potential in the Player Phase, Yarne is more than capable of utilizing a defensively oriented build such as this one to surprisingly good effect. This is in large part due to the fact that Yarne’s ability to benefit from Bunny Fang’s -2 Special charge is contingent upon solely whether or not he meets its prerequisite HP threshold after combat — regardless of who initiates combat. An Attack Asset is ideal here to let him more reliably secure OHKOs against incoming opponents.

One of the last living Taguels, Yarne makes his mark with his own take on the standard offensive cavalier, in large part thanks to the potent capabilities of his personal weapon, Bunny Fang. On top of a passive +3 Speed and cavalry effectiveness, Bunny Fang carries a variation  the powerful Special Spiral skill and lowers the charge of his Special by two if his HP is less than 75% after combat — regardless of whether his Special activates before, during, or after combat. Essentially, this means that aside from lending itself to the usual applications of Special Spiral (which is already a rarity amongst cavalry units), Bunny Fang is unique in that its effect can also be employed with Galeforce for a consistent improvement to his maneuverability in the Player Phase. Furthermore, the fact that Bunny Fang is not locked to a specific phase means that Yarne’s role in any given team is surprisingly flexible as he’s able to perform effectively on the offensive and defensive given the proper build.

Statwise, Yarne can make use of this versatility to good effect. He boasts strong Attack and physical bulk, and his Speed, albeit somewhat middling, can easily be mitigated with smart play and careful buff management. Combined with his status as a cavalry unit (despite his lack of a mount), Yarne can certainly perform as a capable combatant to his own right -- and this is not to mention his inherent ability to transform. Upon transformation, Yarne gains a solid +2 Attack as well as the means to deny his opponent’s follow-up attack and inflict a substantial -4/-4 in-combat Atk/Def debuff upon initiation, making him a force to be reckoned with in the Player Phase. However, Yarne also comes with his own weaknesses. Most notably, his poor Resistance renders him extremely weak against any kind of magical damage and his status as a cavalry unit is quite restrictive in terms of skill availability, limiting the scope of his offensive capabilities severely; he also suffers from a weakness to cavalry effective weaponry and an inability to travel over certain terrain.

Overall, Yarne remains a strong choice for an offensive cavalry unit. Boasting good build flexibility and a variety of unique strengths at his disposal, he can establish himself as a valuable addition to any team willing to have him, fitting well both in and outside class-exclusive compositions.

Yarne’s key feature is his unique personal weapon, Bunny Fang. Granting him a passive +3 Speed in addition to lowering the charge of his Special by two if his HP is less than 75% after combat, Bunny Fang is a highly versatile weapon that enables Yarne to obtain a considerable offensive presence in either phase. Its ability to deal effective damage against cavalry foes may also be quite valuable depending on the types of foes one most commonly runs into.

Yarne’s base Attack stat of 35 is quite good and inherently provides him with the means to deal considerable amounts of damage against unsuspecting foes, a strength that is only bolstered further through the potential boosts he can obtain upon transformation.

Yarne isn’t particularly lacking in bulk either; his strong physical bulk of 72 at base renders him rather proficient at neutralizing opposing physical threats, effortlessly trading blows with them without incurring significant damage in return.

As a cavalry unit, Yarne is able to benefit from access to class-exclusive buffs and exceptional mobility, both of which can prove to be key strengths in solidifying his combat prowess.

Not only does Yarne’s status as a beast unit grant him access to even more class-exclusive buffs, but it also imparts him with the ability to transform and consequently attain a meaningful improvement to his offensive capabilities in the Player Phase, provided that he fulfills the adjacency requirements for transformation at the start of each turn.

Being a cavalry unit is a double-edged sword. In addition to causing Yarne to suffer from a glaring weakness to cavalry-effective weaponry, his status as a cavalry unit prevents him from traversing certain terrain as well as restricts him from inheriting a variety of different skills, such as Null Follow-Up and Flashing Blade.

Yarne’s base Resistance stat is simply horrible. At an incredibly low base value of 17, Yarne will undoubtedly struggle when facing off against magical damage dealers, especially in the Enemy Phase if he is not properly equipped to handle such threats.

Remember Kronya’s infinite Vantage Moonbow? This build is an alternate version of that, but in some ways it can be considered even stronger

First of all Yarne has access to boons, and +ATK is the best asset for any Vantage-centered build. Consequently, -HP makes for a great Flaw as he can then use Ardent Sacrifice just once to drop his HP below 75% and into the Vantage threshold. Being Cavalry and a Beast also helps as he can get much stronger support from his allies through Goad and Fortify Skills, buffs that Kronya does not have access to.

Second, while Kronya has an alternate version of Vantage built into her weapon, Yarne has Special Spiral 3 built into his, leaving his B skill slot open for Vantage which is a much easier skill to find compared to Special Spiral. The threshold for Bunny Fang’s Special Spiral effect is the exact same as Vantage- just drop him below 75% HP for free Special cooldown after combat.

Since Yarne is a high Atk nuke, Glimmer makes a better 2-CD Special than Moonbow, although either Special works just fine. Distant Counter of course helps him respond to ranged enemies, especially tomes with cavalry effectiveness, who usually lack the Def to withstand a Vantage Special from Yarne. Def Smoke is a great C skill for any Enemy Phase tank, especially Vantage units that only need to worry about their own Atk and their foe’s Def, or possibly even an Atk Wave skill for the same reason.

And finally, Yarne’s Sacred Seal should focus on boosting his Atk above all, either through enemy initiation or HP threshold boosts. Fierce Stance or any Atk-boosting Stance/Posture seal work incredibly well during the Enemy Phase. Brazen Atk Seals make an even better option as their effects come into play during both phases, even guaranteed if Yarne is in Vantage zone.

Yarne is best supported by an Atk-buffing beast or cavalry ally such as Kaden and B!Eliwood, or with Dragon Ninian to Dance him while allowing him to stay transformed.