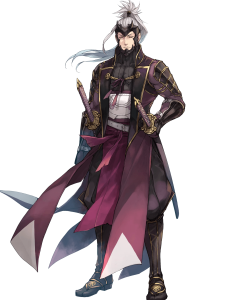 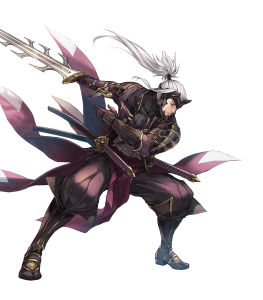 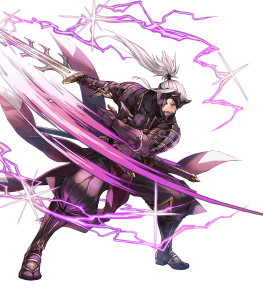 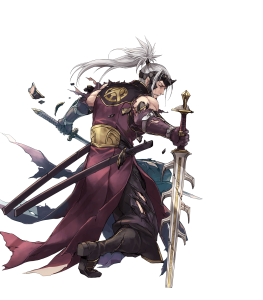 High Base Total and Ideal Distribution

With a high base stat total of 182, Yen'fay is pretty much gifted a huge, flexible stat budget to invest with. In particular, his 37 Attack and 42 Speed provide a splendid offensive baseline, being on par with those of respected modern swordfighter units — for reference, Young Eirika is a near-premium equivalent at 36/43, and he completely eclipses Mareeta's base stats by 2 HP, 2 Atk, 1 Def, and 5 Res.

His defenses of 43/32/28 are also respectable. When backed by his high Speed plus the damage reduction effects of Carnage Amatsu, it provides a solid baseline for durability.

Carnage Amatsu is quite the simple but exceptional weapon for a Grand Hero unit, especially after such a dry period of underwhelming free units. It features three essential effects:

Mind implosions aside, Carnage Amatsu coming with damage reduction and distant counterattacking basically frees up Yen'fay's A and B slots for other competitive skills, giving him a great degree of customization and flexibility for your needs.

Scores High for Arena / Competent in Other Modes

As mentioned above, Yen'fay has a stat total of 182 and can place himself in the 185 scoring bin after merging. When maximally merged, this makes him a nice and accessible choice for those needing a scoring anchor for Arena as well as other modes utilizing Arena scoring.

With already potent damage reduction skills such as Spurn already covered in Yen'fay's weapon, he is absolutely free to choose from a list of solid B-slot options exclusive to only infantry units. Null Follow-Up is an absolutely recommended anti-meta choice above others, but Yen'fay can alternatively choose a Lull skill or a few others to suit specific needs. Yen'fay's ability to use Special acceleration options such as Time's Pulse and Steady Breath is also thankfully attributed to his infantry status.

Yen'fay is already a fighter with solid value by himself, but one thing that really sells him for many players is the fact he is a freely-acquirable unit. Copies of him can be earned through Grand Hero Battles, its reruns, and the Heroic Grail shop (whenever it updates with him). As our first solid value Grand Hero in quite a while, it's quite worth the trouble and investment to build and maximize him; many of his optimal skills such as premium Rallies, Atk/Spd Solo 4, and Null Follow-Up are also available for no Orb costs through Compile Manuals

Locked to Mixed or Enemy Phase

As a unit in the extremely crowded sword infantry variety, Yen'fay is very much defined by his weapon. It follows that he must deal fully with some of his blade's shortcomings.

Though thoroughly fantastic at contributing to Yen'fay's defensive gameplay, Carnage Amatsu's only real contribution to his offensive performance is its piddling Spd +3. Outside of that, its lack of additional stat effects means Yen'fay can be somewhat lacking in the pure combat department, especially compared to other sword units with goodies such as Special trigger acceleration or Atk/Spd +X. Thus, the swordsman king falls a bit short when it comes to all-out attacking and player phasing — especially with builds involving Galeforce which requires strong initiating power.

The last point brings us to the sheer amount of units that already exist in Yen'fay's niche. Not even considering the increasing number of Dodge-style fighters in the lance and axe weapon classes, sword units such as Malice, Karla, Ayra, Young Eirika, Mareeta, and Brave and Legendary Marth are particularly tough competition. In their favor, their weapons focus mainly on improving pure combat, not to mention that all of them can simply shed Distant Counter entirely in favor of stat slots. Additionally, as new units in Heroes get tougher and Save armors become an increasingly more favored, safer choice, Yen'fay may find his omnitanking niche limitedly useful.

Carnage Amatsu's built-in damage reduction is one of Yen'fay's primary selling points and sources of durability. Seeing as the amount of damage it reduces is based on Yen'fay's overall Speed difference over his enemy, one way to get the jump on him is simply winning the Speed comparison. If a very fast enemy even manages to score a follow-up attack on top of this, Yen'fay is practically as good as gone.

The same applies to units with the ability to neutralize damage reduction skills — Young Innes and his Bow of Frelia is a commonly built example. On the "player skill issue" side of things, positioning Yen'fay next to his allies rather than away from them deactivates the damage reduction completely.