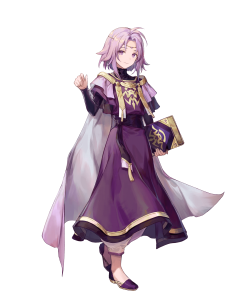 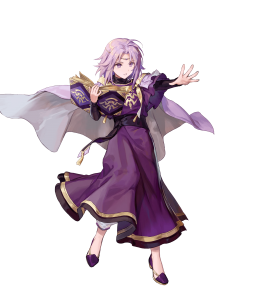 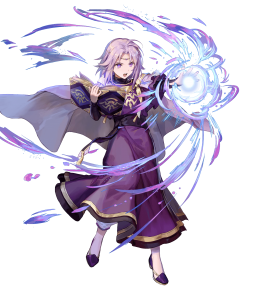 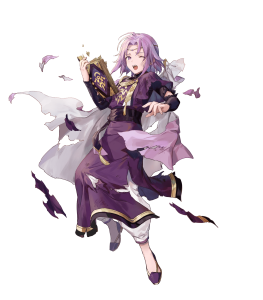 Tome of Grado is a great weapon, providing +3 Attack, a debuff of -6 to enemy Atk and Res to any enemy that initiates combat against Lyon or is at 100% health, as well as neutralizing Lyon’s penalties to Atk and Res. In addition, it also provides triangle advantage against colorless bow, dagger, magic, or staff units under the same conditions. This combination allows Lyon to be extremely effective at fighting many ranged units.

Lyon’s base 38 Attack is great and allows him to deal high damage, especially with the superboon.

Lyon’s base 37 Resistance is great and means he takes little damage from many magic foes, especially those he has triangle advantage against.

Lyon’s base 34 Defense is rather high for a mage, giving him much better matchups against physical units such as bows and daggers compared to many of the other blue tome infantry he competes with.

As the only 4 star focus unit on a 3% focus, it costs roughly one-fifth of the orbs to summon Lyon as it does a 5 star focus unit, on average. Note that the odds of summoning him go down drastically if that 4 star focus rate is split between multiple 4 star focus units, as might happen on something like a Double Special Heroes focus.

Lyon’s base 18 speed is quite bad, leaving him unable to naturally double almost all other units without extreme amounts of support, and he is likewise very vulnerable to being doubled. As an infantry tome unit, he is forced to rely on Quick Riposte if he wants to guarantee enemy phase follow-ups. His player phase offense is very weak since has no reliable way of getting a player phase follow-up attack.

Lyon’s status as a blue tome is a double-edged sword, as while has fantastic matchups against many colorless bows, and not much competition for being the best blue “Raven” tome, he fares poorly against green bow units such as Python or Rath due to triangle disadvantage. As these units are often used interchangeably with colorless bows in contexts such as Aether Raids defense teams, Lyon’s performance may vary wildly depending on what units he encounters, even between teams mostly composed of ranged units.

Lyon’s statline and kit are well-optimized for fighting red and colorless ranged units, but much weaker against many units that do not fall into those categories, making him less versatile than some other tanks, especially in combination with his weak player phase presence.

Melee Armor Rankings survey (with PRF)
Instead of ranking by votes, in this survey you have to rank from 0 to 10 based on how…
Update is out! Refine time :sparkles:
All of the refines here: reddit r/FireEmblemHeroes -…
If I had a valkyrie staff
If I had a valkyrie staff every time I 10+ a Michael Sinterniklaas gen 1 colorless…
Hard work... Pays off?!?
For the past week that the askr banner’s been out, I’ve spent all my orbs (roughly 300…
Need help with Forma S!Fir
This is my last torch to help S!For. What skill should I settle on for her C slot? I…
Read More