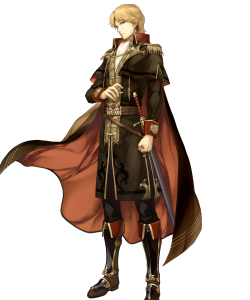 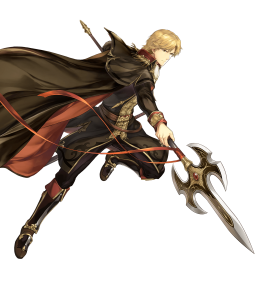 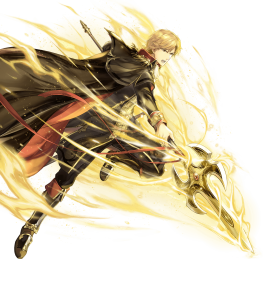 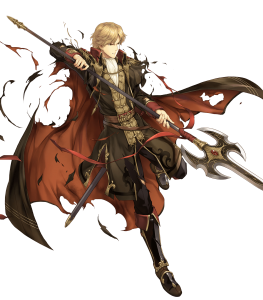 This is a person of fiction. Names, characters, business, events and incidents are the products of the queen's imagination. Any resemblance to suspiciously dumb blonde knights from Grust is purely coincidental. (Low-Investment / General-Use Tank)

Zeke's version of the legendary weapon Gradivus continues the mysteriously commonplace legacy of having Distant Counter built into it, allowing him to counterattack ranged units without needing to waste his A-slot on it. Even more fortunately, Zeke avoids the curse of having Distant Counter being the sole effect of the lance — Holy Gradivus comes with a guaranteed follow-up attack if Zeke's HP remains above 25% HP. Not only does this also save Zeke the trouble of wasting a slot on Quick Riposte, but it also primes his damage output and performance whether he's tanking or initiating combat against most enemies. It's a very simple and effective weapon overall.

In exchange for basically dumping Speed, which is mostly a non-issue given the follow-up effect of Holy Gradivus, Zeke enjoys a balanced but substantial stat distribution everywhere else. Most notably, he isn't cursed with terrible Resistance like other cavalry units — it sits at a solid base 35, giving him great magical durability while giving the Distant Counter effect of Holy Gradivus more mileage. 40 Atk also means Zeke isn't too shabby at all in the hitting department, as long as he's built with other Attack swing skills.

Increased movement and access to the Lull and Near Trace skill lines are things Zeke very much appreciates from being a cavalry unit.

Due to Zeke's basically non-existent follow-up potential outside of Holy Gradivus, he's rather reliant on said weapon for a threatening offensive presence. Faced against some form of Null Follow-Up, Zeke will find himself dealing significantly less without a follow-up attack.

Similarly, should Zeke fall below 25% HP, he will basically be locked out of his weapon's follow-up effect entirely until healed up. Given Zeke's only-sufficient base 40 HP — which can't be refined for +5 HP and leaves Zeke reliant on Mythic or Legendary Blessings to increase — this is, unfortunately, a pretty easy pitfall to run into.

It can be argued that many recently-released units are mainly as threatening as they are because of the many stat swing effects built into their weapons. For instance, players tend to dread facing Legendary Chrom, Fallen Edelgard, and Zeke's Magvellian counterpart, Duessel, as their weapons apply a noticeable Atk/Def -6 in-combat under extremely easy conditions. The normal and Legendary versions of Sigurd are also worth comparison as they gain large attack boosts in addition with a guaranteed follow-up. In short, stats in a weapon is a fantastic thing to have in this day and age.

Zeke's Holy Gradivus, unfortunately, spares none of that, perhaps due to the trade-off of Distant Counter already present. While Zeke still poses a great threat due to the secondary follow-up effect in the weapon, he will essentially be reliant on his passives and Sacred Seal to strengthen his raw bulk and power. Though his base kit spares you a lot of this worry, it's something to chew on for alternative builds — he can't run a straight nuking or Galeforce builds as swimmingly well as Duessel. Simply put, Zeke tends to be less scarier in the stats department than other threats.

Zeke suffers from terrain lockouts, which tends to render him less effective in areas with forests or cavalry trenches. Due to the previous rise of high-tier cavalry units such as Legendary Sigurd and Legendary Lilina, Zeke may also find himself wary of an increasing number of cavalry-effective weaponry. Finally, though blessed with awesome skill access with Lulls and Near Trace, there are pretty much no other exciting B-slot inheritance options to spice up Zeke's playstyle more.