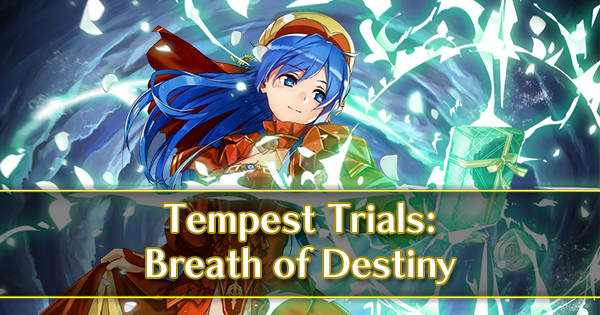 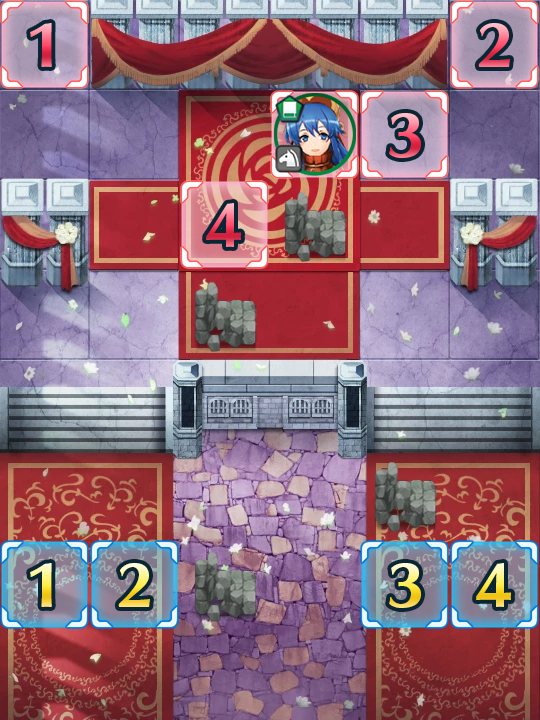 This special event contains a series of maps you must fight your way through from beginning to end. Losing does not mean game over, as you can retry with a second team. At the end of each round, points are received based on clear speed, survivability and bonus units. Your total points are tallied and used to unlock various rewards, many of which are exclusive to the Tempest Trials. Additionally, there is a player ranking with large feather rewards given to those with the highest scores.

All seals can be upgraded within the Sacred Seal Forge to their higher-level counterparts. Orbs, feathers and crystals are awarded up to 100,000 score. Sacred Coins are also available, with the highest tier being 27,500 score. Up to 10,000 feathers can be obtained depending on your score ranking compared to other players.

Thanks to the 2.0 update and forging, staff-users are stronger than ever and are highly recommended for all kinds of teams. They are by far the most reliable and powerful healers available, and can also provide strong chip damage to neutralize strong threats. Clarine is the standout choice here, as a bonus unit. However they are not the only option on the table.

There are a few types of builds which can be used to heal teams without using a dedicated healer. The first of these is the “Renewal Medic”, a build type which relies on healing from Renewal and the legendary weapon Falchion. Reciprocal Aid is a must-have skill to ensure clean transferral of health to allies. Forging Falchion greatly increases the healing from this type of build.

Lastly, there is the "sustain tank" build. With a cooldown -1 weapon such as a Slaying Axe, Steady Breath, Quick Riposte and Aether, a unit can charge and fire off their special every round of combat keeping their health topped up over a long time.

One of the fastest ways to clear the Tempest Trials is with a powerful ranged attacker wielding a Brave bow or Blade tome. Combined with a buffer or dancer, they can destroy most units in the trials with ease once they are under the Desperation threshold. Nino, Linde, Rhajat, Tharja, Katarina, L'Arachel, Ursula, Brave Lyn and Reinhardt are all common choices. Lilina(LA) and Roy(LA) are the best choices amongst the bonus units, with Klein as a trailing third.

Use Klein to kill everything. Dancer for obvious reasons. B! Lucina is a additional buffer and V! Ike can kill pesky tanky greens as well as bait Lilina at the end. Recommend surrendering at last map after killing most of the enemies if you have a lousy IV 40% bonus unit (like me -atk LA! Lyn :( ) so you can get the most point value.

Just my team for this TT. Seth has a Brave Sword+ set

The Full Team Of Fate
Submitted by AzuraChan_Gamer

This is a awesome team to use

Klein
- base kit plus reposition/spur attack 2 courtesy of Barte for a relatively minimum si build
- attack seal, his speed is decent with TT buffs but he still won't double the faster half
- with hone attack, will kill most units unless they have high defense/hp, acts as reposition to get Hector in position as well
- I use him to bait boss Lilina

Clarine
- 4*+2
- basic healer build
- she rarely attacks, only supports with heals and buffs

Hector (LA)
- DC, Glimmer, vantage and quick reposte seal
- baits archers, green mages, blue units
- keep away from red mages
- I use swap for movement since the maps are relatively small but feel free to use pivot etc

Hope this helps someone!

Colorless Reinhardt taking it to the next level!
Submitted by BlueGamerHawk

With access to a Brave Bow, Roy (LA) completely shreds through this Tempest in similar fashion to Reinhardt, along with 3 dancers for tactical maneuvers it's a breeze.

Roy (LA) -ATK +DEF <---- oof (but it's okay with an ATK +3 seal, some Hone/Spur/Drive ATK buffs & being a bonus unit he'll get the Tempest boost. It patches it up as much as possible pretty nicely.)
Brave Bow+
Draw Back/ Reposition
Iceberg/Luna
Death Blow 3
Swordbreaker 3
Flexible (I use Threaten Defense outside of Calvary teams :)