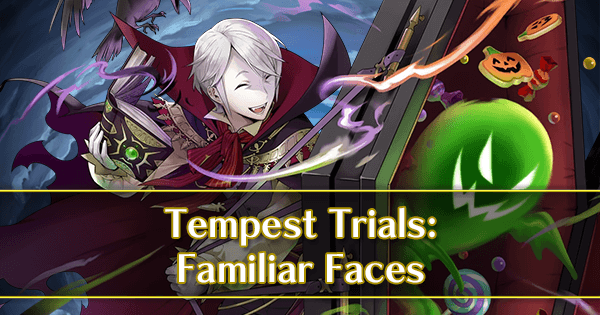 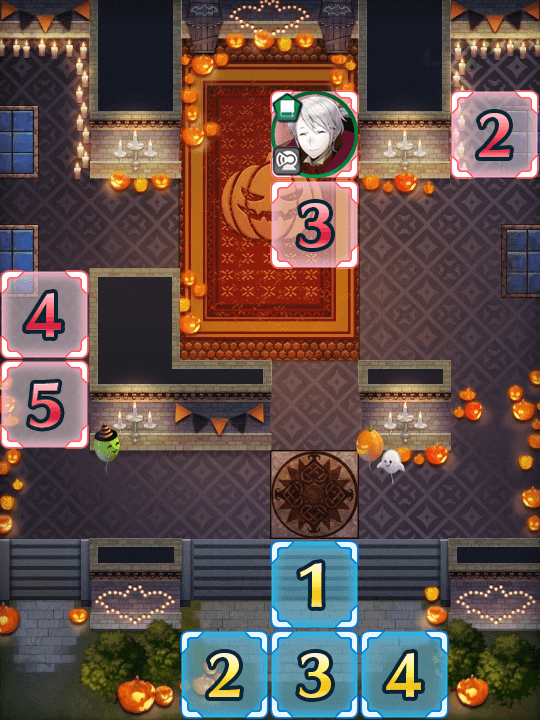 Fan favorite Dorcas is dressed up for halloween and is the reward unit for this Tempest Trials! If Ippei's art isn't enough of a reason to pick him up, his great statline (including base 41 Attack) and inheritable axe might be. Halloween Dorcas can be used or sacrificed to inherit Sturdy Stance 2. Check out his Hero Analysis here.

This seal gives units a straightforward stat boost of +2 Speed and +2 Defense. It's a great seal for units with already-complete builds looking for a little extra boost to their stats. While its not the most glamorous reward, it only requires one level up in the Sacred Seal Forge to reach max level.

This skill gives the user a +6 boost to their Speed when foes initiate combat. Unfortunately its considered mostly useless thanks to skills like Quick Riposte and Vengeful Fighter that can guarantee double attacks. Units who need Speed tend to be better on the player phase, leaving this seal with only niche uses.

A five-star version of Dorcas: Pumpkin Smasher. It's highly recommended to use Dorcas during the trials, thanks to his status as a bonus unit and awesome Attack power. Dorcas can be used in the trials or sacrificed to inherit Sturdy Stance, Wary Fighter or the Hack'o'Lantern to other units. Check out his Hero Analysis here.

Arguably the most valuable reward from this event, this seal gives a unit the power of Brazen Atk/Res. This seal gives the strongest boost to Attack available, making it a must-have choice for any threshold sweeper or offensive unit. Units such as Alfonse, Lyn, Halloween Kagero and Karel gain a significant boost from this seal.

Staff-users are highly recommended for all kinds of teams due to their amazing healing potential. They are by far the most reliable and powerful healers available, and can also provide strong chip damage to neutralize strong threats. Halloween Mia is a bonus unit who wields a staff, making her an exceptional choice for the Tempest Trials.

One of the fastest ways to clear the Tempest Trials is with a powerful ranged attacker wielding a Brave Bow or Blade tome. Combined with a buffer or dancer, they can destroy most units in the trials with ease once they are under the Desperation threshold. Kagero and Niles are the only ranged sweepers available as bonus units this time, but both are worth using and even work well on a team together.

Henry is a dangerous unit, being a threat both when attacking and defending. Don't be fooled by his armored unit type, as he packs Armor March to close the gap surprisingly quick. He is always paired with an armored ally to activate this condition (they also get the boost!). Halloween Henry's statline is also very difficult to exploit: 34/42 defenses combined with 58 HP make him very difficult to OHKO.

Offensively, he threatens with Bold Fighter and a huge 40 Speed, allowing him to win skill ties (for instance using Wary Fighter to counter Bold Fighter won't work, since the skills will cancel out and he'll likely win the Speed tie). If he attacks a unit who counterattacks and fails to KO, Henry will activate Vengeance to demolish his foes. With such a high HP pool, his Vengeance Specials deal extraordinary damage and should be avoided. The best way to eliminate Henry is with a unit who can OHKO him, or bait him out and survive both of his attacks.

A team focused on the use of mages.

-H!Dorcas is the Bonus unit, which with its base set practically nothing can kill it
-W!Tharja is the main wall, which thanks to Vengeful Fighter is able to beat almost any unit
-LA!Lyn is the Armor March carrier that allows you to move around easily, but unless you change Vengeful Fighter by Quick Riposte, use the same Build as W! Tharja
-Arvis again is the Pseudo-Healer Debuffer that supports the team

Heroic Trials (Round 1, 3 and 4)
Submitted by RafaSebas

A team where Sharena, Mia and Arvis have rage (Round 1), the 4 are Infantry (Round 3) and have accessories (Round 4).

-Sharena defeats magicians by attracting them for their high Resistance and Speed.
-Mia is the Bonus unit that handles most units, except very strong Blues.
-Arvis is the Pseudo-Healer thanks to Recover Ring, in addition to debuffing all the statistics with Ploys.
-Micaiah prevents Henry from activating Armor March on the final map, and killing lances and low Res units.

For Whom the Belles Toll
Submitted by SapphireSea

Warning: Not tested for autobattles.

Mia comes with her base kit, plus an attack hone. She also carries Phantom Spd to help her Flashing Blade, to patch up her speed bane.

Myrrh plays the tank role, with DC and QR, plus Iote's seal and Swap. She has to run a level 2 C skill for me, since neither Goad Fliers nor Hone Dragons will do anything.

Felicia is there to handle magic users, but occasionally chips in other places. Her passives are Mirror Strike, Desperation, and Savage Blow, but she also runs the Def Tactic seal.

Veronica is primarily there for heals, but occasionally assists in other spots. She's kept her base kit, and runs Res Tactic seal.