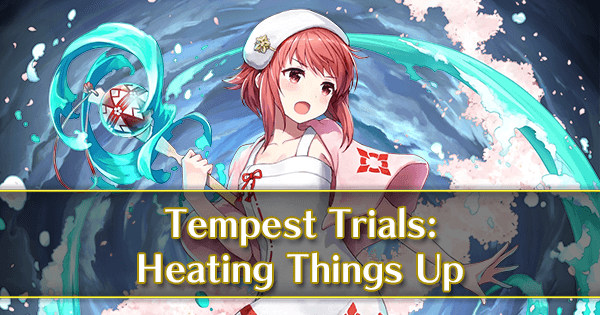 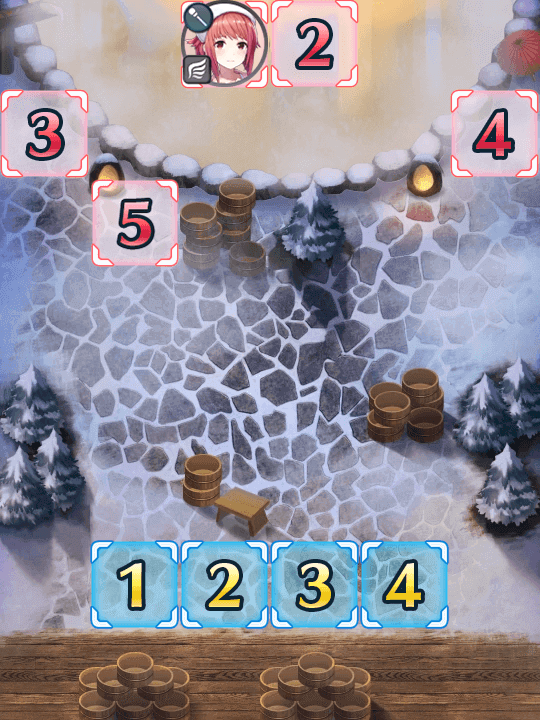 The new Tempest Trials unit is Camilla, who comes as a colorless flying dagger-wielder. She comes with a new dagger, the Ouch Pouch, which allows her to trigger Specials much more often. She can be sacrificed to grant the rare Hone Fliers at four star rarity.

This Sacred Seal gives the effects of Fire Boost to a unit, giving them +6 Attack during combat whenever their HP is three or more than their opponent. Although it has a unusual activation condition, this is a great seal for units with high HP. Keep in mind that the activation condition is based on current HP, not max HP.

A fantastic seal that grants the effects of Even Def Wave, which boosts the Defense of all allies within two spaces (including the user) by six, every second turn. Although it only works every second turn, the self-buff makes it amazing for most situations and can be used on any type of team.

A five star version of Camilla: Steamy Secrets. She is an excellent unit to use during the Tempest Trials, and has valuable skill fodder (Hone Fliers was previously only available on five star summon-only units). Her dagger's effect is also great and enables high-damage burst builds.

This seal grants the effects of Brazen Atk/Def, increasing Attack and Defense by seven once the user is at or under 80% HP. It’s a great seal for threshold sweepers, or units built around skills like Vantage or Wrath. This is an amazing reward, so make sure you reach 20,000 score!

Ryoma - Samurai at Ease: Another Tempest Trials where fliers rule supreme, making up the majority of good units. Ryoma is an excellent lance flier with amazing offensive stats. He also has decent Defense, although he’ll need an Iote’s Shield seal to fully take advantage of his defensive capabilities.

For tips and tricks on using Ryoma: Samurai at Ease, see his Hero Analysis here.

Hinoka - Relaxed Warrior: Another offensive flier, Hinoka is a green dagger-wielding unit. She also has great offensive stats, and her weapon comes with anti-dragon capabilities. Her Defense is abysmally low though, so beware sending her in on units with Distant Counter.

Sakura: Hot Spring Healer: Sakura is the most useful bonus unit and the boss of the trials. Being a flying healer, she has fantastic support utility. She can cross any terrain to make emergency heals, and can even help your damage dealers charge Specials faster.

Elise - Bubbling Flower: Being a dagger cavalier, Elise is the awkward child of the Hot Springs banner. And while she’s a solid unit for the trials, she shares a color with Xander and Leo, her brothers and both cavaliers who would otherwise make good teammates for her. Although her offense is amazing, Elise’s defensive stats are both poor.

Camilla - Steamy Secrets: Perhaps the best offensive unit for these Tempest Trials, Camilla is no joke thanks to her great offensive stats and weapon. Ouch Pouch’s effect works at the start of each map during the trials, so she’ll always have a Glimmer ready to delete opponents. She also fits right into a flier team with Hone Fliers.

Xander - Paragon Knight: A surprise (but welcome) bonus unit, the freely available Xander excels at the event due to his natural Distant Counter and great mobility and defense. With some buffs to his Resistance, he’ll be an outstanding addition to your Tempest Trials team. And if you don’t have Xander yet, you can pick him up from his Grand Hero Battle map.

Takumi - Wild Card: Another solid free unit, Takumi is a great mixed threat due to his solid offenses and utility with Close Counter. He works great out of the box, but does even better with a budget set (Try out Vantage!). He too will need a buff to his Resistance, but will otherwise be a great unit choice. Takumi is also very good at taking out the final boss, Sakura.

Leo - Sorcerous Prince: Ah yes, I knew there was a fourth Nohrian sibling. Leo is actually a great choice of unit, and although he lacks the raw damage output of other ranged units, he is much better defensively. Leo is a reliable trials runner although he’ll need offensive buffs to consistently score KO’s.

Staff-users are highly recommended for all kinds of teams due to their amazing healing potential. They are by far the most reliable and powerful healers available, and can also provide strong chip damage to neutralize strong threats. Sakura: Hot Spring Healer is a bonus unit who can heal allies, and is highly recommended for this event.

One of the fastest ways to clear the Tempest Trials is with a powerful ranged attacker wielding a Brave Bow or Blade tome. Combined with a buffer or dancer, they can destroy most units in the trials with ease once they are under the Desperation threshold. Hinoka, Camilla, Elise, and Ryoma are all sweepers who are also bonus units. Takumi and Leo can also perform this role, but only when given certain skill builds.

Sakura is the latest in a long line of annoying Tempest Trial bosses. She’s a staff flier, which gives her great mobility and the ability to indirectly threaten your team through her own healing. Physic also allows her to heal from a distance.

Grandscratcher and Spd Opening are powerful buffing skills who will target a different enemy each map. Even worse, she has a high base Attack and hits extremely hard with Fire Boost and Wrathful Staff. She is a well-rounded and dangerous enemy unit.

Use tanks to absorb damage and healer to heal tanks

This is why the springs are segregated

Form a wall
Submitted by Hydrapod

With winter Eirika buffing Robin, and legendary Tiki's with everyone on top of a couple ward armors makes this team very tanky

Takumi is useless but he tries