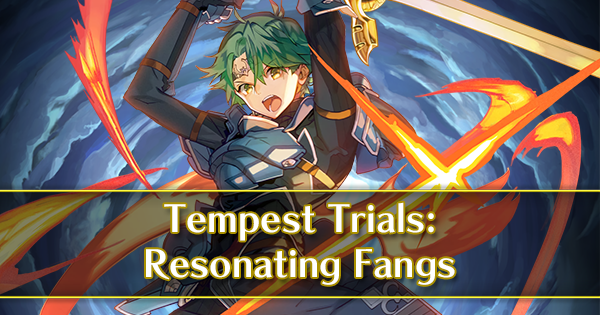 This special event contains a series of maps you must fight your way through from beginning to end. There are a few changes this time around, which make the trials easier. The important ones are as follows:

Changes from the Previous Event

If you include a bonus ally on your team, you can increase your score. If you add multiple bonus allies, only the highest bonus will apply. Bonuses do not stack.

A total of 36 orbs can be obtained through the event.

Preparing for the Trials

Before you can attempt the Tempest Trials, it’s assumed that you have a decent pool of (at least two of each colour) heroes at five stars, or four stars with a high merge value. It’s also expected that you have a recommended skill build, as some of the fights will be very tough. It’s a lot easier to claim the top seal this time around, so consider that it might be faster to run a lower difficulty, and complete more runs in the same time. Losing a team will not significantly affect your point yield, so don’t stress and focus on managing your time and avoiding burnout.

Without further ado, let us jump into the team-building part of the guide. Instead of talking about just completed teams, I’ll be talking about the elements that make those teams successful, so that players with varying boxes can construct viable teams. Unless otherwise stated, all units from here on out are assumed to be running their recommended builds.

A team with the best chance of success will have the following:

The first units you’ll want to think about using are of course, the bonus units. Sharena is an excellent choice and will likely be a part of many F2P team compositions. Lukas can perform mostly on par with her, but Clair may struggle due to her risky playstyle and low defense. Of the 40% Heroes, Alm is the strongest choice, potentially bringing healing to the team. However, Boey can perform very well with a Triangle Adept/Raven tome build. Mae and Faye are hurt by their low speed stats for offensive units, but are still strong choices. If you can’t find room in your team for a bonus unit, consider starting with a throwaway team that features one.  Suffering one defeat with a bonus unit will still give you a higher score than if you never used one.

Healers are fantastic in the Tempest Trials, and can single-handedly sustain your team throughout the duration of the run. However, running a healer can compromise your team's offenses (unless you can get Wrathful Staff). It’s recommended to take a healer for safe runs, but keep in mind that they will slow your runs down compared to more offensive teams.

There are a few types of builds which can be used to heal teams without using a valuable team slot on a dedicated healer. The first of these is the “Falchion Medic”, a build type which requires a user of the legendary Falchion. With Renewal in B slot and Reciprocal Aid as a support skill, this build can provide healing to allies without sacrificing offensive power. Notable units who can pull this off include: Alm, a bonus unit and Masked Marth, who appeared as a free four/five star reward from the last trials. This is a great option for those with the units, but expect a lower amount of raw healing. If you have Linde, you can run a Breath of Life build. The effects from Aura (Linde’s unique tome), Breath of Life, and the Breath of Life seal stack to provide a whopping 15 health to all units around her when she attacks. Make sure to take Reciprocal Aid along with this build, to ensure that Linde herself can be sustained. If you don’t have Linde, the build can be applied to any character, but will only heal 10 HP. Remember that a dancer can potentially double this healing output!

This skill build is amazing for the Tempest Trials, granting a significant amount of sturdiness to a team combined with a strong attacker. These units are capable of defeating many foes in a row without losing much HP, which makes them an idea choice for the trials. Grey units are very common in this version of the trials, and a unit with this build is highly recommended. The most common users are Robin(M), Sophia, Cecilia, Boey and Spring Camilla. Robin is especially useful, as he can be used to safely KO Celica, the final boss.

One of the most popular teams, with proper skill inheritance, this core of three units is very strong and can clear most of the trials with ease. The strategy is to buff Nino into the stratosphere, trigger Desperation, and use Azura to sing her around to KO most foes. Nino can run Breath of Life (+ the seal) to heal the team. Alm provides some healing, the ability to KO greens and can take Swordbreaker to duel other sword-users. Azura is the Celica-slayer, and must run Red Tomebreaker to ensure a safe KO. The fourth unit is up to the user’s discretion, but it’s recommended to cover a weakness if you can’t get proper skill inheritance. If you don’t have Alm, you can run Masked Marth in his stead, and use the final slot for a bonus unit of your choice.

Another decent team, Sharena and Hector can KO most units with Kagero cleaning up mages and grey units. Kagero is the primary unit slayer, and should be running Breath of Life to give some healing to the team. She must also run Red Tomebreaker to ensure an easy KO on Celica in the final map. This is a mostly well-rounded team, but lacks a dancer. Masked Marth is the flex unit of the team and can be replaced by Olivia or even a dedicated healer. Azama is a great choice in this regard, thanks to his high defense and natural access to Pain and Rehabilitate.

A sturdy team built around double mages. Robin(M) and Nino are the main damage dealers, with Olivia to help them secure kills. Olivia herself takes care of the powerful green units, while Nino runs a Breath of Life build to help her team heal. Robin can run either Swordbreaker for faster runs, or Red Tomebreaker for a safer Celica KO. This team lacks a bonus unit, but nearly anyone can be run in the final slot.

The idea is to use both Frederick and Reinhardt as heavy carries from start to finish.

Frederick (+ATK -HP)
Brave Axe+, Reposition, Luna, Death Blow, Drag Back, Threaten Def 3
Ideal for taking care of tanky mages Reinhardt would otherwise not able to take down on his own as well as receiving buffs from Reinhardt

Really what ends up happening is Reinhardt steamrolls through the map with buffs and support from Xander and Cecilia. Rinse and repeat until map 7.

Except for the dancer units should be 5* olivia is weight over azura or ninian because of reinhardt be already a blue.
Rein kills almost everything with death blow (fury / life and death or TA can work well)

Olivia ruby sword help tank or weaken enough greens like cecilia or merric which can survive any of the other even if they are buff. Wing of mercy is also needed.

Effie is a perfect hero to KO Celica early. Wary Fighter on a Defensive Space will eat an entire hit from Celica, and assuming you have Bonfire ready, she will instantly kill her. Healing and buffing Effie after taking the initial hit with Elise's Kindled-Fire Balm will make the kill much easier (see below.) Be wary of any green tomes, they can chew away her HP pretty easily. However, keeping her planted on the defensive spaces with Elise healing her will keep Wary Fighter active and constantly build up Bonfire, allowing her to move in and kill anything due to her insane ATK stat.

Hector is just Hector. He easily takes out the dagger/bow users and blue units that may appear, and he can help Effie out tremendously by taking out axe users that pester her on the defensive spaces. Keep Hector out of the range of Celica and any other red tomes or Armorslayers; they will almost always instantly kill him (Celica OHKOs him every time).

Armads, Swap, Bonfire, Distant Counter, Vantage 3, and Threaten Def 3 (if you want to give Effie a boost, Goad/Fortify Armor also works too).

Elise is an incredible healer for this run. Her high mobility allows her to get to her injured allies with no problem, and she has incredible ATK and SPD for her class. The optimal build for Elise is a high sustain that also boosts the attack power of her allies to keep them alive in between turns while also KOing enemies as fast as possible.

Boey may not be the best green mage, but I prefer to use him with this type of team. He boasts an incredible HP stat and has his own self-sustain, so it makes it easier for Elise to focus healing Effie and Hector. Boey's insane defense with Earth Boost allows him to eat a lot of damage, and that stat can be boosted even more just by having adjacent allies. He can also take out Hammer users easily, which are the biggest nuisance to both Effie and Hector. Having Boey also gives you a +40% point bonus, which can get you over 400 points on the Lvl 35 Five Battle run.