Tempest Trials - Before We Met... 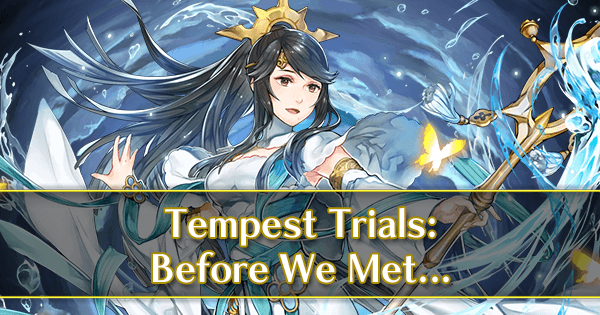 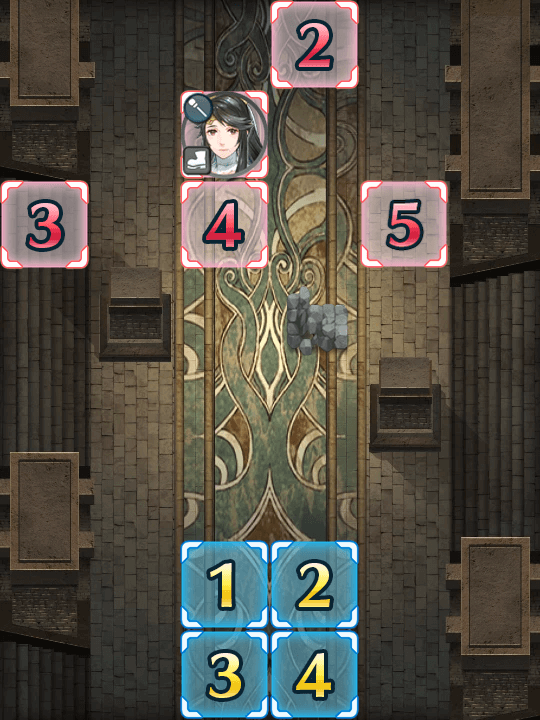 Article by
Cecil
Table of Contents

Azura’s latest appearance is that of a green mage, but with the capacity to Sing! She’s the first free Sing/Dance user in the game since launch, making her a must-have for all players. She can do her job at 4* if necessary, or be sacrificed to give Spd/Res Bond 3 to another unit.

This Sacred Seal gives the effects of Gale Dance to one unit, allowing them to boost an ally’s Speed by 4 when using Sing or Dance on them. Although this seal can be given to many units, only those with Sing or Dance can activate its effects. It’s the perfect choice for Azura: Young Songstress, the reward unit for this event.

This seal gives its user the effects of Water Boost 3, granting a +6 Resistance boost in combat when the user’s HP is equal to three or higher than the opponents. Water Boost has never been a popular Skill, and is often left in favor of offensive stat increasing Skills such as Fury and Atk/Spd Bond.

A 5* version of Azura, Young Songstress. Her unique tome Book of Shadows gives her some Speed and inflicts significant debuffs on the opponent when she’s adjacent to an ally. She can also be sacrificed to give Torrent Dance or Spd/Res Bond to an ally. Notably, both the Gale Dance and Atk/Def Bond seals synergise well with her.

This Sacred Seal gives the effects of Atk/Def Bond to one unit, giving them a +5 boost to both Attack and Defense when standing adjacent to an ally. This is one of the most reliable stat boosting seals, being easy to activate alongside Spur skills and Ally Support bonuses. This seal is one of the best rewards available during the event.

Corrin, Dream Prince: Perhaps the best offensive dragon in the game, Corrin’s got a great mix of offense and defense, although his Resistance is a little low. His Draconic Rage weapon allows him to activate Specials often, and get substantial Attack and Speed boosts. Equipped with a healing Special, he is a highly recommended unit who can sustain well and score numerous KOs.

Corrin, Dream Princess: This version of Corrin is your typical defensive dragon, with great Defense, good Resistance and solid HP. She excels in Speed, further boosting her defensive prowess. Although she lacks the raw power that Corrin: Dream Prince possesses, she’s a sturdier fighter who also excels due to Draconic Rage.

Camilla, Flower of Fantasy: Known lovingly by the community as Camilla #5, she’s a incredible offensive unit who can easily pulverise opponents thanks to her huge 37 Attack. It’s recommended to pair her up with other Fliers to take advantage of the powerful Hone Fliers buff. She becomes even stronger with a Blade tome, and synergises well with Azura: Young Songstress. She is easily defeated by archers, so playing her will require careful positioning when they are present.

For tips and tricks on using Camilla: Flower of Fantasy, see her Hero Analysis here.

Mikoto, Caring Mother: Healers are always incredible units for the Tempest Trials, and Mikoto is no exception, boasting great offensive stats and a useful weapon in Flash. Her ability to stop enemies from counterattacking enables otherwise flimsy sweepers to run amok. Additionally, her healing prowess is invaluable, allowing teams to sustain over subsequent battles.

Azura, Young Songstress: Dancers are one of the most sought-after units, and Azura is no exception. She enables all kinds of teams to do well, especially offensive teams who seek to clear the trials as hard and fast as possible. She can even take the offensive herself, as her unique weapon Book of Shadows applies a hefty debuff to her opponents, enough to let her nab some easy KO’s.

Ryoma, Peerless Samurai: One of the original Distant Counter swordsmen, Ryoma is a great all-rounder unit capable of fighting both offensively and defensively. Raijinto’s Distant Counter allows him to play much more flexibly, and even handle mages (with some support). He is one of the best units for autobattle teams, due to his reliability.

Hinoka, Blue Sky Warrior: Equipped with a Bow, Hinoka is a fearsome aerial opponent who boasts effective damage on two types of units. She makes a great partner to Camilla, as the two form a deadly duo who can buff each other and hit physically and magically. She must beware of archers however, as they spell doom for her due to her low Defense.

Leo, Sorcerous Prince: The only Cavalry unit available, his unparalleled threat range make him a deadly offensive unit. Leo’s great mixed defenses make him tough to KO, although he must take care not to suffer follow-up attacks on his low Speed. He doesn’t stand out compared to the other units, but is an otherwise fine choice for the Trials.

Staff-users are highly recommended for all kinds of teams due to their amazing healing potential. They are by far the most reliable and powerful healers available, and can also provide strong chip damage to neutralize strong threats. Mikoto is a bonus unit who wields a staff, making her an exceptional choice for the Tempest Trials.

These are some of the most potent allies for Tempest Trials, offering both safety and speed to your run. In short, they are great for all the usual reasons, but are affected by their low combat stats, which can hold them back. Due to team limitations, if you choose to field a dancer they must be a respectable combat unit in their own right, with either a full build or something close. Azura: Young Songstress is a highly recommended bonus unit who can refresh units with Sing.

One of the fastest ways to clear the Tempest Trials is with a powerful ranged attacker wielding a Brave Bow or Blade tome. Combined with a buffer or dancer, they can destroy most units in the trials with ease once they are under the Desperation threshold. Camilla: Flower of Fantasy and Hinoka: Blue Sky Warrior are both incredible ranged sweepers who can buff each each other. Leo and even Azura: Young Songstress can also be used to sweep, given the right Skill build.

Mikoto is one of the most annoying Tempest Trial bosses, thanks to her status as a Staff wielder, and annoying support skills. With Flash+, Mikoto can prevent multiple enemies on your side from counterattacking. This can really ruin enemy phase builds and units with skills like Quick Riposte and Distant Counter.

She also has very respectable stats, boasting a whopping 55 Attack on the hardest Lunatic difficulty. Mikoto's high Speed makes her difficult to double without significant buffs or certain Skills. If you manage to take her down in one turn, it will stop her from activating Brazen Atk/Res or Martyr+.

Team Statistics
Submit a Team
This should be enough with good tactics...
Submitted by Mario Young

Can't think of a good name
Submitted by GamingFS

P.s. I'm glad that I have Ryoma since I don't have anyone else that's a bonus unit

Hinoka has some of her base kit. However, she is the lone flier, so she has Desperation on B and Atk Smoke on C, with Guidance seal. She sports Draw Back to drag allies away from danger.

Corrin and Ryoma are in a support pair. Corrin kept her base kit, but as a lone dragon unit, she cannot use Fortify Dragons, so Breath of Life is used instead. She also carries Wings of Mercy, and her seal slot is flexible. Ryoma, meanwhile, kept a bit of his kit, but with Fury on A, Vantage on B, Draw Back, and Flashing Blade seal.

While I originally had Brave Veronica in the team, I decided to use Sakura instead at one point, and still did well. She had Dazzling Fear+ to soften the foes if needed, and has Physic+ so she can reach her allies without getting herself into danger, along with LtS 2 and Heavenly Light. Other skills are flexible; she could be given Wrazzle Dazzle with LtS seal...

Lukas built with 2 fortress defences 3 skills can deal with any physical attacker, while you use p!azura to defend blue magic and ike for red and blue, though you might need to buff his defence with warding breath or azuras +4 when singing. Corrin is here to deal with any blue physical units lukas cant face tank, but prepare for ways to get her off the frontline and behind ike or lukas.

Azura Had So Much Pain,So His StepMother And Her Friends Came For Her