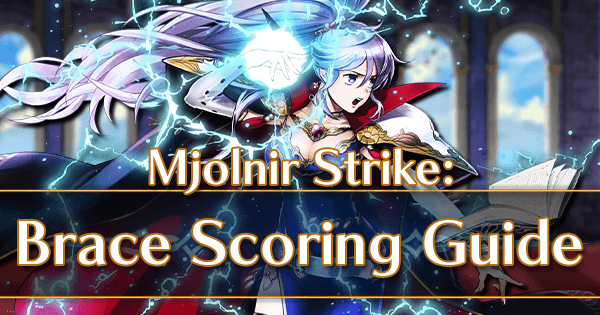 While Mjölnir’s Strike isn’t exactly what most were hoping for from the most recent FEH Channel, the mode seems to be something of a less-frustrating Aether Raids where you play the Defensive side instead of the Offensive side. In this mode, you create a defensive setup and try to eliminate the waves of opponents who spawn on the top side of the map before they can reach the structures at the bottom. This is made even easier by the fact that you have one unit who will not be attacked and can freely move around the top two rows to eliminate as many enemies as possible.

As with every mode in Fire Emblem Heroes, Mjölnir’s Strike has tiering rewards, which encourages players to score highly. But how do you score highly on this mode? With 8 team slots, it can be a bit confusing.

The bad news is twofold: one, scoring uses the same rules as the Arena, where BST (Base Stat Total), merges, and skill SP costs dictate how powerful your enemies are and subsequently, how highly you can score. This makes Summoners with pre-built arena cores, such as armored units or units who utilize the Duel skills have an advantage over players who do not.

Secondly, mythics of the correct season are treated as if they have a free +10 merges, score-wise. This may seem like a benefit - your free Eir and Peony can count as among your +10 units! - but it means that people with highly merged mythics can exceed the score cap for that unit, resulting in a unit that is essentially +20 merges and scores accordingly.

This puts us in the position where hypothetically, the highest possible scoring team is comprised of four +10 mythic heroes for the corresponding major season. At the moment (major Light), that is four +10 Peonys, because Eir does not have access to a Duel Skill yet.

Fortunately, there are some good things about this mode’s scoring as well. Firstly, you only need four units with max scoring potential - one in each slot. The higher scoring unit in any particular column (Strike, +10 Spd, +10 Def, +10 Res) is considered for score and the lower scoring unit is not considered at all.

This means that you can put a member of your scoring arena team in one position and then swap them with a unit who can be more efficient at getting quick kills, such as a Brave Bow archer, Reinhardt, or another favored unit.

And finally, major mythics can still help you score highly even if they are unmerged - a +0 Peony will score just as highly as a 170 BST +10 unit during Major Light season, so if you don’t have four high scoring units but you do have a mythic hero of the Major season then you can still score as if you had all +10 units.