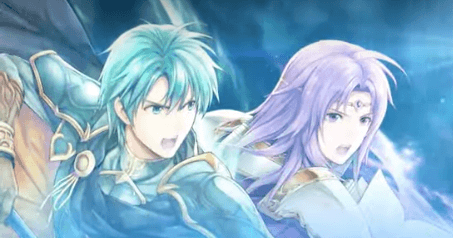 The Desert Mercenaries Are On Their Way 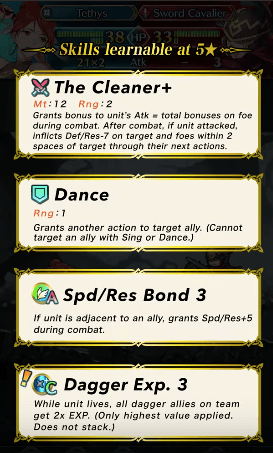 Tethys is an infantry colourless dagger unit, making her instantly comparable to Performing Olivia. She does not have an exclusive weapon, instead carrying The Cleaner. Her other notable Skills are Spd/Res Bond and Dagger Exp.

Depending on her stat spread, Tethys might be just as useful (if not moreso) than Performing Olivia. Considering her lack of color weakness, she should be able to tank an attack or two fairly easily. 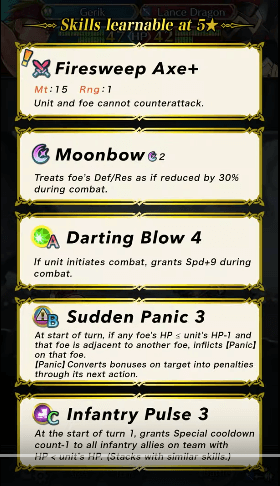 Gerik is an infantry axe unit. He does not have an exclusive weapon but does carry the brand-new Firesweep Axe. His other Skills include Moonbow, Darting Blow 4, Sudden Panic, and Infantry Pulse.

Judging from his Skills, it is likely Gerik will have high HP and mid-to-high Speed. This would synergize well with his Firesweep Axe, and depending on his Attack, might make him ready-to-use with 0 investment straight from summoning. 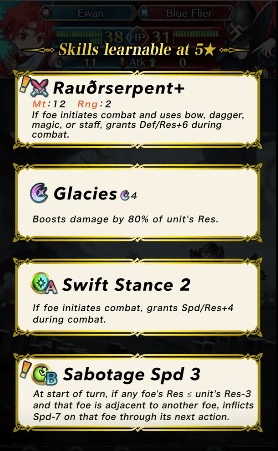 Ewan is an infantry red mage. Like the previous units discussed, he has no exclusive weapon, though he does carry the Rauðrserpent tome. The rest of his kit includes Glacies, Swift Stance, and Sabotage Speed.

Ewan does not seem to have any notable qualities, and doesn’t seem to fill any particular niche. He seems entirely unremarkable, but might have average to above average Speed and Resistance judging from his Skills. 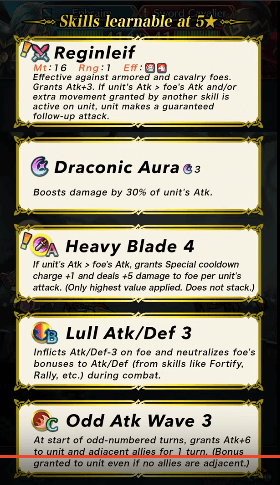 Ephraim (featuring Lyon!) is a brand-new infantry lance Duo hero with an exciting new Duo Skill! It seems to grant a pseudo-Armor March effect to all Armor or Infantry allies within two spaces, granting them one extra movement. Cavalry and flying allies are confirmed to be unaffected. His exclusive weapon, Reginleif, grants Atk +3, is effective against armored and cavalry foes, and grants guaranteed follow-ups if Ephraim has more Attack than his opponent or if Ephraim has been granted extra movement by a Skill. His other Skills include Draconic Aura, Heavy Blade 4 (which has the same effect as Heavy Blade 3 as well as granting +5 damage when the unit attacks, assuming the unit with the Skill has more Attack), Lull Atk/Def, and Odd Atk Wave.

Naturally, Ephraim is the most interesting hero on this banner, and for good reason. His Duo Skill is unique as it grants extra movement – it could potentially open up some exciting new strategies for infantry units and more flexible team compositions for armor units. Ephraim would pair well with Brave Ephraim, who has a weapon with a similar effect to Reginleif (minus the armor and cavalry effectiveness). Like Duo Hector before him, he seems to be a potent force.

Abby Lee
Abby Lee is a Content Contributor, News Correspondent, and Team Lead for GP Fire Emblem Heroes as well as an Editor for GP Girls' Frontline. She has been with the site since December 2017. From ON, Canada.

Thoughts on this Nils build
@NilsBestBoy wrote: FEH Unit Builder - Nils720×1280 1.13…
Advice on Seth Build
@LeBateauIvre wrote: Screenshot_20200221-233220_Fire…
Some themed Arena teams I found
@nobody625 wrote: The title image750×1334 453 KB Respect…
Deletes my other account
@Erk wrote: Well, today it deletes my first account that I…
A skill for my b!Ike having Lancina as support?
@ThunderTanuk wrote: I got this build for ike Screenshot…
Read More