I get bored at work and my mind comes up with random things, so I decided to try my hand at throwing out a suggestion for a Hero. The first one to come into my mind is Kaze, since Saizo's tooltip info mentions him but we have yet to see any sign of a release. I also have a plan for Vaike, but I'll do that later.

[WEAPON]: Kaze's Needle
Might: 9. After combat, inflicts DEF/RES-5 on foe through its next action. Grants allies within 2 spaces SPD+2 during combat.
[SUPPORT]: None
[ACTIVE]: Rend Heaven
Boosts damage dealt by 50% of opponent's DEF/RES.
[A] None
[B] Poison Strike
Inflicts 10 damage to foe after any combat this unit initiates.
[C] Fortify Res 3
Grants adjacent allies Res+4 through their next actions at the start of each turn.

The general idea is for Kaze to work as a mage bait/support unit, similar to how his brother Saizo functions for physicals. Knowing that, I referenced Saizo's stats to create Kaze's stat distribution. Like Fates, Kaze is faster and has better resistance, whereas Saizo has Power and Defense.

I initially wanted to create a unit with the Soldier's Knife, since we don't have a Brave Dagger, but I thought that Kaze's eponymous dagger would be better suited for the character, especially since its abilities in Fates translates fairly well into Heroes, granting a Drive SPD effect.

Rend Heaven is also an active I felt could change the Arena for a while. Since we don't have differing ATK/MAG stats to calculate by, it would be a bit unfair to add half of the enemy's ATK to yours, especially if they use a different damage type. Because of that, I feel it would work better for physical attackers to add a chunk of the enemy's defense while magical attackers would scale off RES.

Poison Strike, because seemingly all ninjas have it.

I wanted to give him the Acrobat skill, allowing Infantry units to ignore terrain penalties (such as forest penalties), but I figured that the two skills I already had were enough. Maybe I'll save it for Panne.

What do you guys think for my first attempt at a unit? 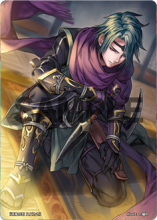 Asked by TheEternalShade3 years 9 months ago
Report
Sign in to Answer or Ask a Question!

Isn't Rend Heaven like Dragon Fang except it uses it's opponent's Atk?

Asides from that we haven't seen Spd Ploy. We have all other Ploys in Def, Res, and Atk.

Good point. I actually kind of forgot about the Ploy abilities. XD

Since STR and MAG don't exist in Heroes, it all scales off a single ATK, Rend Heaven would translate better calculating off DEF for physical weapons and RES for magical.

That would work better if it wasn't literally Luna's effect.

Luna ignores a percentage of their DEF/RES. Rend Heaven would add it to the damage dealt as a flat bonus.

Unless I'm deceiving myself, rend heaven is the same thing as Luna. Halving def/res seems to me the same as adding damage equal to def/res.
E.g. it procs against a foe with 30 defense. Luna halves it, so their defense is 15, basically adding 15 additional damage to the total. If i started with 45 neutral damage attacking, I'd hit against defense 30, halved to 15, for 30 damage.
With rend heaven, I'd attack the same for with 45 neutral damage against 30 defense. Rend heaven would add 1/2 the Foe's defense to the damage total, giving me attack 60, minus 30 defense, still equaling 30 damage dealt.

Especially for lower-attack units, Rend Heaven evens the playing field significantly more than Luna does, especially against commonplace high-DEF heroes like Hector and Xander and effectively acts as a hard-counter to Fortify and Ward buffs predominantly found throughout Armor, Cavalier, and Dragon teams.

So,for the sake of argument, if we run the calculations again, counting for a single Fortify buff with no Ward:

Especially in defensive teams that run multiples of these buffs. Again, these numbers are accounting for Kaze, and Daggers are neutral. If we pass this to a colored unit so that the Weapon Triangle comes into effect, Rend Heaven could easily eclipse the usefulness of Luna, especially on units at disadvantage or with lower ATK.

Seems like an interesting idea, however he might struggle to carve out a niche for himself considering Felicia functions almost exactly the same as a mage bait (or could undermine her only use).
Rend heaven seems fairly poor for Kaze considering mages generally don't have much defence but if you went with the brave dagger/soldiers knife idea and an absurd speed stat maybe he could be a desperation quad dagger user who could possibly proc RH every time he attacks, making up for his low attack.
Overall I think there's some good ideas and I'd appreciate Kaze being added to heroes as well.

The primary difference between Kaze and Felicia's roles are that Kaze is a buffer where Felicia (to me) seems to be more of a debuffer.

I chose Rend Heaven to give to Kaze for the same reason that many units are given seemingly useless abilities, so that it can be used in sync with skill inheritance. As you said, a quad build would work well with it, it could also be passed to someone with higher ATK. I also added it on Kaze because I believe that non-Tome magic weapons that scale off RES (like the Levin Sword or the Flame Shuriken) will eventually be added, giving Kaze an upper hand when it comes to an active that syncs, should you pass a Flame Shuriken to him.

I imagine IS bringing out Firesweep Dagger. That would be a big add to Heroes and can kinda outclass poison dagger in a way.