Should You Pull - Adrift Edition 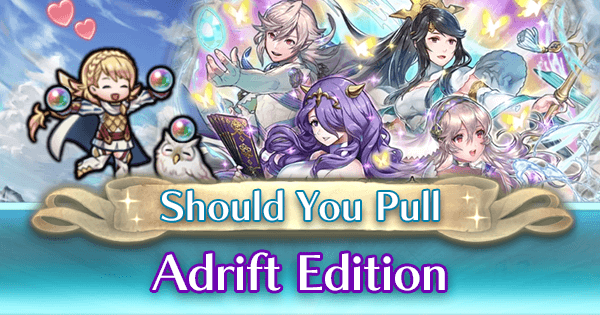 With this series, we hope to accurately represent the pros and cons of each new banner, as well as offering our own opinions on how worthwhile the banner may be. Everyone has different priorities and different affinities for certain characters or installments of the Fire Emblem franchise, however, so our word is not law- we simply aim to give our readers a complete picture of what each part of a new banner entails. With that in mind, let's get started!

In this banner, Mikoto is colorless, Corrin M is blue, Corrin F is green, and Camilla is red. The above numbers are calculated as your odds of getting one of the specific focuses- with no color sharing in the banner your odds increase, but with a four unit banner, the odds of getting any specific unit is somewhat decreased.

More information on how these numbers are calculated can be found here, in our new probability guide.

Corrin reprise her role as an infantry dragon, this time as a green unit with a prf breath, Draconic Rage. While she is blazing fast with 37 Speed, her Attack stat of 31 could be higher. Still, coupled with a Defense of 32 and a Resistance of 27, female Corrin looks to be a very strong infantry unit and an upgrade of her blue dragon form.

Compared with the 3 star Fae

Compared with the 3 star Corrin

Compared with the 5 star female Kana

As mentioned earlier, Corrin F gets Draconic Rage, a prf breath which reduces her Special Cooldown by 1 and grants her additional Atk/Spd based on the number of allies around her. Supplementing this is Atk/Spd Bond, her default A slot which further increases her Attack and Speed if she is next to an ally. Additionally, she gets one of the high SP Assist slots on Rally Atk/Spd+, a skill which allows her to use her turn to buff a teammate with Atk/Spd +6.

From this, it's clear that Corrin is meant to be a team player, and can be seen as an extremely speedy Enemy Phase tank, where you can bait opponents into her in situations where both her prf and her A slot stat boosts activate, giving her +10 Attack and Speed on top of her already-weighty 47/37. With a boon along with buffs, she can easily hit 50 Speed, making it almost impossible to land a double attack against her reasonably-impressive bulk.

Finally, her Assist slot warrants mention as being the best boost for an infantry Blade tome thus far. With Corrin F's Rally, Blade tomes will get +18 Attack and +6 Speed, which can allow them to compete with emblem Blade tome users.

Joining his female persona is male corrin's second alt, a blue dragon who excels in both Attack (35) and Speed (35), while not shirking on Defense either (31). This makes male Corrin a fantastic duelist and very versatile in his application, as well as rather forgiving when it comes to IVs.

Compared with the free Kana M

Compared with the 3 star Nowi

Compared with the 5 star legendary Tiki

As far as his skills are concerned, Corrin M gets the same Slaying breath weapon as Corrin F, which grants him Atk/Spd+5 if surrounded by his allies. Also like Corrin F, he gets a Bond skill in his A slot, Atk/Def Bond. It's reasonable to assume that their playstyles are a little similar then, with Corrin M being a little bulkier and a little slower than Corrin F.

Unlike Corrin F, however, Corrin M also comes with Null Follow-Up, a new skill which shuts down enemy skills that grant followup attacks. While this is only inheritable to infantry units, the skill is obscenely powerful in the current Arena meta, where Fighter skills and Quick Riposte reign supreme. This also nullifies follow-ups from breaker skills and weapon-granted follow-ups (such as Myrrh's Great Breath). With this skill alone, it's possible to counter most of the Bold/Vengeful Fighter armor meta, as well as the slow Enemy Phase-based meta and reverts doubles back into Speed checks, giving much-needed power back to Player Phase units and units with high Speed stats.

With all that being said, M Corrin may be better at his Enemy Phase playstyle than F Corrin, simply due to his negation of Bold Fighter, however, due to Null Follow-Up he will also be particularly effective during Player Phase, where he can attack into a slower opponent without worrying about being doubled in turn.

Mikoto continues the trend of powerful staff units to be introduced into the game, which is refreshing in a way, after almost a year without any new additions to the pool. Her stats are in line with what we can expect, with a high Attack of 35, middling Speed of 32, and moderate defensive bulk.

Compared with the 3 star Lucius

Compared with the 5 star Genny

Mikoto comes with Flash, an inheritable staff that inflicts a status preventing counterattacks in a 2 space AoE. This staff is up there with Gravity and Witchy Wand as the best inheritable staves in the game, and can be a massive boon to any team using Player Phase units, as it prevents them from being retaliated upon throughout their turn. Combined with Dazzling Staff, Flash is a fantastic way to keep your allies from harm while inflicting a little damage of your own.

Note however that this weapon is virtually useless when paired with units who prefer Enemy Phase, as opponents will still be able to love and attack during their next turn. Additionally, attacking enemies under the status of Flash will still accelerate their Special cooldowns, so watch out for that as well.

Mikoto also comes with Brazen Atk/Res, increasing her already-powerful Attack and bolstering her somewhat middling Resistance. Finally, there's Infantry Rush, a fantastic skill which grants her allies the use of a Heavy Blade effect within two spaces.

From this, it's evident that Mikoto is meant to function as an offensive support unit, dipping in and out of combat to grant her allies powerful advantages over her foes while also tanking through retaliation damage with Miracle and healing herself through Martyr. In this way, her base kit enables her to take damage so that her allies won't have to- the perfect playstyle for a loving mother, wouldn't you agree?

Coming in on the heels of our first free mage flier is Camilla's fifth iteration and fourth flier alt, a red tome mage with extremely high Attack and decent Resistance, for which she trades mediocre Speed and poor Defense.

Compared with the free Aversa

Compared with the free Julius

Compared with the 5 star Summer Tana

Camilla comes with the Book of Dreams, a prf tome that increases her already-high Attack by 3 and debuffs her opponents by -4/-4/-4/-4 if she is adjacent to an ally. This is a powerful effect that can increase her one-shot potential by giving her an additional 7 damage against her foes, but has the limiting constraint that she must be next to an ally.

Furthering this theme is her natural A slot, Atk/Res Bond, which gives her additional +5/+5 combat buffs to her Attack and Resistance if an ally is next to her. Topping it all off is her Atk/Res Link, giving her +6/+6 field buffs if a movement skill is used by or on her. With all three of these skills in tandem, Camilla ends up with an effective 65 Attack and 41 Resistance against an opponent with debuffed Attack and Resistance (for a net total of 69 Attack/45 Resistance).

Of course, the big caveat is that she must be next to an ally for both her Bond skill and the Book of Dreams debuff to activate- if she is not next to an ally, she loses out on 9 damage and takes an additional 9 from magical sources. This makes it difficult to position and use her offensively, though she is an incredible defensive mage counter.