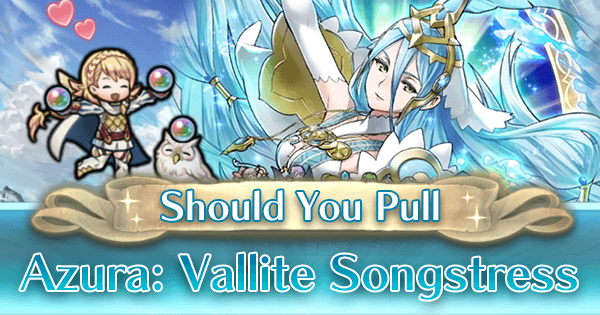 Azura’s Attack and Speed are both relatively high for her niche of a tome dancer, at 30 and 35 respectively.  With this, she can be utilized offensively if desired, though still pales in comparison to more combat-oriented blue mages, like Delthea and Ishtar.

Occupying the same weapon type, general stat spread, movement type, and unit type as Bridal Ninian, Legendary Azura eclipses her competition when it comes to Attack and Speed, trading only a few points of her defensive stats in return. In addition, she completely outstrips Ninian when it comes to team utility.

Compared with the free Young Azura

Compared with the 4 star Sylvia

Compared with the 5 star Bridal Ninian

Azura’s prf skill, Gray Waves, allows her to grant a flying or infantry ally an additional space of movement in the battlefield while refreshing their turn.

With Azura’s prf tome, the Prayer Wheel, she can buff any ally a full range of +6 to all stat with only her Assist and C slot, effectively making her the best visible buffer in the game.

She Shoots, She Scores

This banner has two legendary heroes both occupying the blue slot: Fjorm and Azura. Fjorm is a unit with built-in Distant Counter and reasonably decent stats, making her always a boon to have in your barracks. In addition, Fjorm comes with Atk/Def Bond, a very useful A slot skill for Enemy Phase oriented units.

Summer Camilla is a powerful blue tome flier with a wonderful offensive stat spread, making her a fantastic addition to any flier team, particularly when utilizing her with her Blade tome or her native Desperation tome, Juicy Wave. In addition, she comes with Hone Fliers and Flier Formation, offering her fantastic synergy with flier teams.

Legendary Hector has been a Tier 1 unit since the moment of his inception- his legendary axe, Thunder Armads, allows him excellent control of combat by eliminating his opponent’s followup attacks, while his unique C slot, Ostia’s Pulse, can reduce the Special cooldown of all of his allies by 1. His power is unparalleled, as he is tied for the highest Attack stat in the game, as well as exceptionally high Defense and a great HP stat for added bulk.

Nino remains one of the better mages in the game, with very high Speed and good Attack and a tome that offers her flat damage based on how much higher her a Speed is than her opponent's. Her offensive statline is thusfar unparalleled in a flier mage and she comes with Acrobatics and Swift Sparrow, both excellent skills.

Helbindi is a stellar tank and Enemy Phase unit with built-in buffs for his allies and himself on odd numbered turns. While there are plenty of competitors for infantry Enemy Phase Green units, Helbindi is thus far the best with the highest combined defensive stats and impressive Attack to boot. Plus, he comes with G Duel Infantry, a skill which offers summoners the chance to score higher in the Arena.

The original hero, Marth is your go-to man for dragon killing and buffing. Between his stellar self-buffs and his post-combat ally buffs, he’s a perfected Falchion user and lord. Marth also comes with the attractive Infantry Flash, a skill which grants a Flashing Blade effect to his infantry allies within 2 spaces.

Young Summer Tiki is an exceptionally solid choice for the red unit in a summoner’s flier emblem team as she’s thusfar the only flier with access to an Enemy Phase cooldown skill in her Summer’s Breath. In addition, her Atk/Def Bond is still a rare and valuable skill, while her Dragon Valor can help when SP training dragons.

While she seemed very powerful at first glance, Flora’s kit requires specific sets of circumstances and due to her min-maxed stat spread, it’s difficult to utilize her when those conditions are not met. Still, she’s a fantastic choice when it comes to taking down green units and will not balk at DC or dragons, making her a solid dagger addition to a team.

After barely finishing up her introduction banner, Eir graces us on this Legendary Banner as the unit to finally break Legendary Robin’s grasp on these types of banners. Eir is a fantastic unit who can both support and damage, with mapwide buffs and healing to all teammates per turn- still, her frail defenses can leave her vulnerable to counterattacks when initiating.

As the only cavalry unit to touch Tier 1 on our Tier List, Brave Veronica is possibly one of the best non-dancer support units in the game, with powerful buffing, healing, and damage that cannot be retaliated against, all on a 5 tile movement. While she’s often hailed as a great boon for F2P users, her availability has been somewhat scarce since her release.

Summer Takumi is a 35/35 flying archer, making him a more mobile version of Bridal Cordelia. In addition to a bow with built-in Desperation, he can also equip a Firesweep Bow to make him more formidable, particularly on flier teams who can freely give him offensive buffs.