Should You Pull - Beyond Darkness Edition 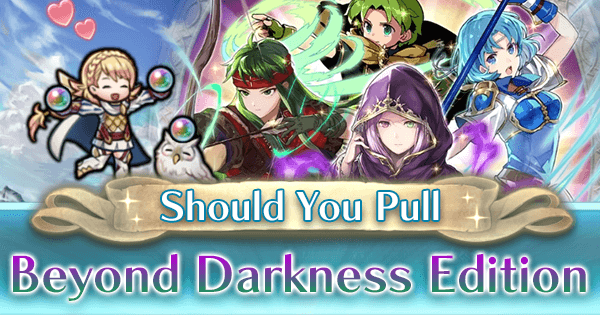 This is a 4 unit banner, meaning that the odds start at 3%. As there are two green units and no colorless, pulling greens gives you a significantly higher chance of yielding a 5 star.

Lugh sports the same general stat spread as infantry Nino, with good Attack, Speed, and Resistance at the cost of poor HP and poor Speed. Notably, Lugh has higher HP, Attack, and Resistance than Nino, while matching her in Speed.

Lughs's stat spread makes him very versatile, able to contest other mages on Enemy Phase while nuking in Player Phase. He ties Lewyn for the highest combined Attack/Speed among all green mages while outstripping him significantly in Resistance.

Compared with the three star Nino

Compared with the 5 star Spring Sharena

Compared with the 5 star Lewyn

Out of the box, Lugh presents himself as a very versatile option for a green mage slot. Unlike the likes of Nino, Lewyn, and Spring Sharena, Lugh prefers to work in the Enemy Phase, where he can get his relevant buffs. However, with a 35/36 Attack/Speed combo, he is also more than capable of flexing into the Player Phase as well (unlike a unit like Boey or Female Robin, who cannot rely on their Speed to double their opponents). This makes Lugh a very flexible unit to have in your party, but it comes at the expense of additional utility- his lack of prf makes him only the fifth infantry green mage out of fifteen without a prf tome.

Sue, Doe of the Plains

While Speed is always a great stat to invest in, archers with Speed as their primary stat face a mountain of competition. Luckily, Sue outstrips them all and with 38 Speed, she is the second fastest archer in the game after Halloween Niles. She pays for this by tying for 9th place in terms of her Attack, which rests at 32

Sue seems to follow in Brave Lyn's footsteps as being a mounted archer who does not take a stat penalty due to being mounted. At 149 stat total, she matches Lyn and finds herself only 2 points below recent non-cavalry archers such as Nina and Summer Noire.

Compared with the 5 star NY Fjorm

It’s Not Easy Being Green

While Sue may ordinarily be a logical powercreep of the always-powerful Brave Lyn, she faces several limitations that makes her a sidegrade, if that. The first is the most obvious- the fact that she is a colored archer, rather than colorless. This severely limits her effectiveness against red units, while making her perform better against blue units, but stepping away from an archer’s niche of a ‘one size fits all’ category makes Sue difficult to place in an established team. Additionally, the lack of prf weapon and skill severely limits her viability in comparison, making her performance closer to New Year Fjorm than Brave Lyn.

Still, she is a very fast archer, is a cavalry, and comes with a highly optimized kit- so there are definite upsides to her as well.

As the 14th blue lance flier in the game, Thea has some big shoes to fill, but she doesn’t quite succeed as well as one would hope. Thea ranks 6th in terms of Speed, 3rd in terms of Defense, and 8th in terms of Attack, making her one of the more mediocre units we’ve seen in recent banners.

Compared with the free Valter

Compared with the 3 star Catria

We’ve Seen This Before

While Thea’s has the highest combined Defense/Resistance among blue lance fliers, she trades a lackluster 31 Attack and average 35 Speed for it. Her niche overlaps with units like Valter and Tana, both of whom have prf lances to eclipse her power.

Nevertheless, she’s a serviceable all rounder unit, who is capable of handling both magical and physical threats, unlike Valter and Subaki. Her Speed can help her to avoid doubles in the Enemy Phase, while her lance and A slot offer her big damage on an Ignis activation.

Idunn is the second red armored dragon we’ve gotten, sharing both a unit type and a base stat total with Halloween Myrrh- as a matter of fact, she’s extremely similar to Halloween Myrrh in many ways and will undoubtedly share an identical niche.

Compared with the 5 star Halloween Myrrh

An Armor To End All Armors

It takes an armor to counter an armor, apparently- and Idunn counters more than just armors. The only time she can be debuffed at all is when she has 100% HP, otherwise she’s simply immune. In addition, her Demonic Breath’s effectiveness against armors grants her a definite edge against units like Halloween Myrrh or Zelgius.

The only drawbacks to her is that she can’t carry enough skills- her prf doesn’t give her Distant Counter and if she runs it over Fortress Def/Res, she loses out on a lot of her bulk. In addition, running something like Bold Fighter with the Quick Riposte seal makes her unable to run the Close Defense seal. Regardless, Idunn is exceptionally strong and seemingly designed to put units like Duma and Surtr in the ground.