Should You Pull - Brave Redux Edition 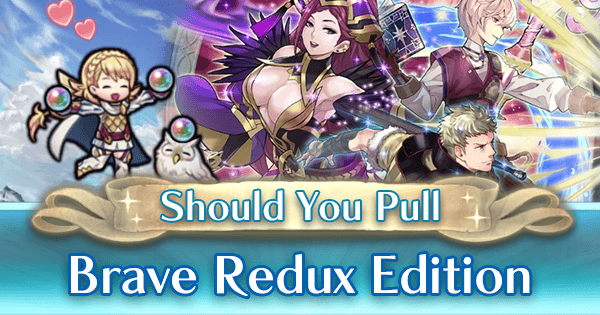 This banner is has three units, a blue (Kliff), red (Owain), and colorless (Loki) unit. Since there are only three units and with none of them sharing a focus, the odds of getting any specific unit is high when compared to other banners with more units or color sharing.

More information on how these numbers are calculated calculated can be found here, in our new probability guide.

Loki enters the summoning pool in a rather unexpected way, given her place in the story chapters- but here she brings with her some interesting stats and skills. She has the best offensive stats of any infantry healer with an Atk/Spd of 33/35, though her bulk suffers for it with only 16 Defense and 25 Resistance.

Compared with the 3 star Maria

Compared with the 5 star Maribelle

As far as her skills are concerned, Loki comes with the prf staff Thokk, which has built in Wrathful Staff as well as a Gravity Ploy on ranged foes with lower HP than her. This weapon is powerful but situational- it’s difficult to rely on with any form of regularity due to the many limitations on it, but when it works then it can be an extremely powerful tool in your favor.

When inheritable skills are considered, Loki has the Earthwater Balm+, a Special which grants Def/Res+6 to all allies for 1 turn. This is an incredibly powerful healer Special with 1 Cooldown, allowing it to be activated often, but of course, it only triggers when she’s healing an ally.  Finally, there is C Duel Infantry and Odd Atk Wave.

The latter of which we’ve seen a few times, but C Duel Infantry is something new, and something that may bring a lot of change to higher tier arena in the coming months. Now with C Duel Infantry, players can bring healers, archers, and daggers into their high level arena teams. This is an incredibly powerful tool in the current arena meta, where healers and daggers can wholeheartedly support an arena bonus unit and archers can utilize Firesweep Bow to negate armor DC and Fighter skills.

Finally joining his companions from Shadows of Valentia is Kliff as a blue tome unit with most of his skills and stats revolving around stat adjustments. With post-CYL trainee BST, Kliff scores as high as gen 1 melee units, making him a solid option for scoring in the Arena modes.

Compared with the free Saias

Compared with the 4 star Tailtiu

Skillwise, Kliff comes with the legendary Sagittae, an uninheritable tome which grants Defense +3 and an all stats up when his Attack is 5 or more lower than his opponent.  Additionally, he comes with a new skill, Fort. Def/Res 3, which subtracts Atk -2 and grants Def/Res +6.

This skill is a fairly blatant powercreep of the old Fortress Def or Fortress Res skills, but makes the concept of adding defensive stats at the expense of Attack a much more attractive option. Chill Spd is his default B slot, which further causes Kliff to inflict Spd-7 on his lowest Speed opponent. This is one of the more valuable Chill skills, though it isn’t exactly new.

Overall, Kliff is an interesting unit, though not a particularly overpowered one. He can work and do his job well, plus his default tome, skills, and stat spread make him very versatile and forgiving to unorthodox builds- however, he’s not going to be significantly shaking up the meta anytime soon.

Despite Odin’s somewhat lackluster performance as a blue mage, Owain enters the game with his Missiletainn, a legendary slaying sword which grants Owain Special cooldown reduction during his foe’s Attack. He joins the fray with a stat spread remarkably similar to Ayra’s, and with a similar playstyle in mind.

Compared with the free Lon'qu

Compared with the free Marisa

Compared with the 3 star Athena

Compared with the 5 star Ayra

Owain comes with his legendary blade, as well as his Blue Flame Special, an inheritable Special which gives guaranteed 10 damage- 25 flat damage if Owain is next to an ally. This combines incredibly well with his inherent Wrath in his B slot to add flat damage to his Special

He plays almost identically to Ayra with her own unique Special in that it’s generally for the best to bait an opponent with him before retaliating with a charged Special activation. Luckily for Owain, his prf sword grants him all the cooldown reductions he needs to achieve this, however, it does somewhat limit him to using Missiletainn.

Still, Owain is remarkably powerful in any player’s hands and comes with a very synergistic kit- bait with him next to an ally, get Atk/Def +5 from his Bond A slot, an extra 15 damage to his Special, and watch the sparks fly.