Should You Pull- Bridal Belonging Edition 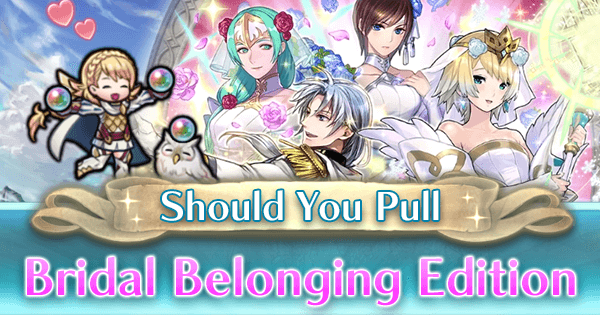 Surprising absolutely no one by now, Tanith has remarkably similar stats to the vast majority of other blue lance fliers, while not being best-in-class for any of them. Her combined Attack/Speed/Defense is nice and makes her a definite upgrade from a unit like Shigure or Thea, but it's not generally enough of an upgrade to favor pulling for her over merging the former two 4 star available lancers.

Compared with the 4 star Shigure

Compared with the four star Thea

Oops I Did It Again

Still, she stacks up well enough, with a nice default weapon for her niche and a decent base kit. Unfortunately, there’s very little that’s actually unique about her, and she has difficulty carving a place for herself when surrounded by other units who do the exact same thing with a few varied stat points.

Sigrun is similarly, not the first of her archetype we’ve seen, nor will she be the last. With stats very similar to Legendary Ryoma, she fills the niche of a speedy sword flier- though unlike Ryoma, her Resistance stat is enough to give her the advantage in magical fights.

Compared with the free Palla

Compared with the three star Caeda

Sigrun is another unit without a unique weapon who seems to only be here to introduce more Aether Raids-specific skills in her AR-D Spd/Def skill. While red fliers are less common than blue fliers at the moment, there’s still little that Sigrun could do that a unit like Laegjarn couldn’t also do better and with a prf sword to boot.

Regardless, she’s still a remarkably solid flier who is carried by her statline and her (inheritable) weapon, which still puts her in a good position when she’s initiating on her foes.

For the third time this banner, Pent greets us with samey stats to many other units of his movement and weapon type, looking eerily similar to Spring Catria, Valentine’s Soren, and even Olwen. His lack of prf weapon or skill doesn’t let him break apart from the mold, however, the fact that he’s one of the fan-favorites from Fire Emblem 7 might help him rise a bit in popularity.

Compared with the free Ursula

What A Beautiful Wedding

For all that many Summoners have waited for an opportunity to finally get Pent, his current iteration may come as something of a disappointment. While he stacks up well to other blue tome cavalry offensively, he brings nothing to the table to outshine any of his peers (and will always be competing with units like Reinhardt for a team slot). Additionally, his base kit is not necessarily optimal for his stats- with Vessel of Cheer, Dull Ranged, and Pulse Smoke, it seems as if Pent was intended to be the vanguard, initiating on an opponent and debuffing the surrounding enemies, before tanking through their retaliatory hits on the next turn with Dull Ranged- however, his low Defense stat means that this strategy falls short when facing archers or dagger units.

Fjorm doesn’t have many units of her weapon type and class to compare to, and all of our flying staff healers thusfar are only seasonal units, however, she is thusfar our most minmaxed class yet. Due to Dazzling Staff, it’s unnecessary to try and worry about defensive stats, and so Fjorm has a better offensive statline than both of her peers, while also investing in a bulky HP stat to activate her prf staff.

Fjorm may have been a moderate upgrade from the likes of Halloween Mia and Hot Spring Sakura if not for her staff, which is a complete gamechanger in terms of how easy she can make certain challenges in the game. Locking a unit from dancing or being danced is absurdly powerful when it comes to game modes like Arena and Aether Raids- the only contingency here is that Fjorm must have higher HP and be positioned in a way that the debuff hits her opponent.  This means that it’s difficult for her to go up against Duma, Bolt Traps, or other passive HP draining units, as those will make her unable to activate her effect as easily.