Should You Pull: Doorway To Destiny Edition 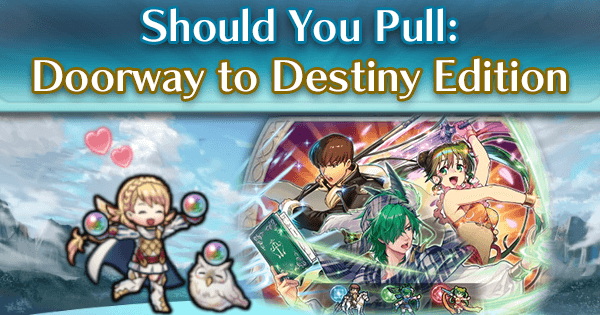 Good evening and welcome to Gamepress’ very first installment of “Should You Pull?”, a soon-to-be series that analyzes new banners to give summoners an idea of the contents of these banners, how new units and skills relate to gameplay and meta, percentage odds of getting each individual unit, and of course, an idea of whether or not you should use your hard-earned orbs on them.

The table above is the result of 10,000 summoning simulations and should be read as your percentage chance for pulling a specific unit when color sniping in X amount of orbs, where X is the number in the Red, Blue, or Green column.

With a large Attack stat of 37, reasonable Defense of 31, and unfortunate Speed of 29, Quan joins a somewhat-bloated blue cavalry Lance pool with a relatively untapped niche of high Attack and Defense with a unique weapon.

Compared with the free Camus

Compared with the free Finn

Compared with the 3 star Oscar

Compared with the Exclusive Legendary Ephraim

As far as skills go, Quan has an excellent weapon in his Gae Bolg, which adds +5 Attack and Defense in any combat as long as he is not facing a flier type unit. He also possesses the updated version of Rally Spd/Def, meaning that he's ideal fodder for score hunting. In addition, he's the first unit with Steady Posture available, which is a skill that increases his Speed and Defense by 4 when attacked.

If you combine his weapon's effects with Steady Posture, he will have an Attack/Defense of 59/40, along with a Speed stat of 33. When combined with a skill like Quick Riposte, he can function well as an offensive tank, though his lack of Speed makes him a liability in Player Phase and will generally result in him being doubled in Enemy Phase.

Quan appears to be one of the better blue Lance cavalry units simply due to having a slightly more optimized stat spread--his legendary weapon and his higher Attack, HP, and Defense allows him a more brawling playstyle than units like Oscar, Peri, and Finn. Additionally, he can run a Brave Lance set and do more damage than any of the others, though doing so requires a complete overhaul of his default kit.

Still, Quan isn't exactly anything revolutionary, and his skills and stats do little to make him stand head and shoulders above his peers- sure, he's a little better than average, with slightly more Attack, a slightly better weapon, and slightly more optimized bulk, but at the end of the day, he has difficulty distinguishing himself markedly above other blue Lance cavalry, particularly when units like Oscar are so easy to merge and find proper IVs for.

Silvia's main attributes are her high Speed of 36, decent Resistance of 30, high HP at 40, and her ability to Dance. For this, she trades a low Attack stat of 27 and a low Defense of 17.

Compared with Olivia, a free unit

Compared with Lene, a 5 star exclusive

Skillwise, Silvia comes with an inheritable Barrier Blade, which grants Res +7 during the Enemy Phase. She also has Mirror Stance, a skill shared by Female Morgan which grants Atk/Res +4 during Enemy Phase. Lastly, she has Deluge dance, which grants an ally +3 Spd/+4 Res after she uses her Dance ability on them.

From this, it's very clear that Silvia is intended to be a unit who prefers to Dance during Player Phase and enter combat in Enemy Phase as a strictly anti-mage unit. Her base weapon and skills will grant her 41 Resistance and 45 Attack when attacked by an enemy. Due to her lack of Distant Counter, this basically amounts to her being able to counter manakete attacks, however her own Attack stat is so low that it's unlikely that she would be able to significantly pierce the Defenses of units like Myrrh or Kana.

All of this culminates into a very frail dancer who will be afraid to take more than one hit. She takes 10 more melee damage than the free Olivia and she lacks the Attack and double-WTA that Azura has to make up for her defensive weakness.

Even so, it's possible to inherit Ploy skills onto her and use her to debuff her opponent as a form of team support. In addition, her Speed is higher than her main competition, allowing her to easily reach over 40 Speed with the right skills and IVs. This can serve to protect her further from doubles and reduce the risk of dying in a single engagement.

You might want to give red orbs a shot if:

Conversely, here are a few reasons to leave the red orbs alone:

Lewyn is rightly considered the prize unit of this banner. As an infantry green mage, he has quite a bit of competition--however, he rises easily to the challenge with an above-average stat spread and great skills.

His Speed is the most notable thing about him. While many male mages are rather slow, Lewyn has an impressive Speed stat of 37, rivaled only by his Attack stat of 34. His other stats do suffer for this however, with very little in the way of defensive bulk.

Compared with the 3 star Nino

Compared with the 3 star Soren

As far as skills go, Lewyn has quite a few reasons to choose him instead of another green mage. Firstly is his legendary Forseti, a tome which allows him to attack twice before his opponent can retaliate, as long as his HP is above 50% and he can naturally double. This tome also grants him Spd +3 to help with the aforementioned doubling. Essentially, this tome is 14 mt weapon which grants him an inverse Desperation- or you can consider it a Brave weapon above 50% HP, so long as he has the Speed to double.

On top of this is his new and powerful Special Spiral B skill, which can be inherited to other infantry or armor units. This skill allows Special cooldown of -2 after combat, provided it triggers during combat.

And finally, Lewyn marks the return of both the rare Swift Sparrow A slot and the Odd Atk Wave C slot, both very sought after when it comes to building other units, and both of which function very well on Lewyn himself.

While Lewyn's stats are fairly average among the upper tiers of green mages, the number of impressive abilities he brings to the table are jaw-dropping. Whether summoners want him to inherit any of his 3 amazing passive skills to another unit or  for his powerful legendary tome, he is unquestionably the most desired unit in this banner.

The following are the reasons you should consider pulling green orbs for Lewyn:

And here are a few reasons you might want to stay your hand from Lewyn: