Should You Pull: Generals of Múspell Edition 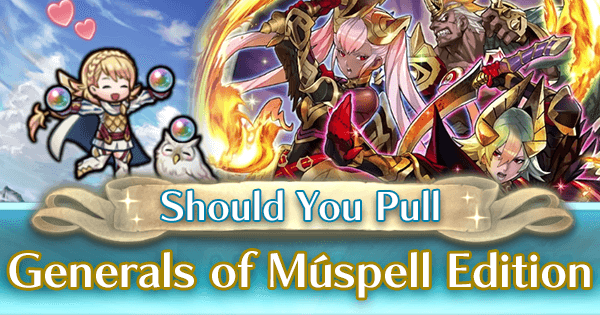 This is a table explaining the odds of pulling a specific unit on the Generals of Múspell Banner- for Red, we're looking for Laevatein or Laegjarn, for Green were looking at Helbindi. Off-focus five stars ("pitybreakers") are included in these calculations, however, our numerical values are not for getting any five star unit, but rather these specific five star units.

The table above is the result of 10,000 summoning simulations and should be read as your percentage chance for pulling a specific unit when color sniping in X amount of orbs, where X is the number in the Solo Red, Green, or Any Red column.

Because this banner has three units, odds are slightly better than they would be on a four unit banner, though a shared focus makes it difficult to color snipe on red. Additionally, the leftmost red column has the odds of getting a specific red unit (either Laevatein or Laegjarn), while the rightmost red column has the odds of getting either of the red units.

Wielder of the infamous BladeBlade with the exact same name as her, Laevatien adds to the inflated infantry sword pool with a respectably unique niche. As far as her stats go, she sports a very high Attack of 37 with a sword that adds 19 damage, giving her 56 Attack out of the gate. Her Defense is also admirable at 34, meaning she can take a hit. For this she trades low Resistance and HP (22 and 39 respectively) and a Speed stat of 31 that's difficult to do much with.

Compared with the free Alfonse

Compared with the free Legendary Ike

Compared with the 3 star Hinata

Compared with the 5 star Legendary Marth

Skillwise, Laevatein comes pre-loaded with an excellent array of skills which rightfully revolve around enhancing her prowess with her prf weapon, the Laevatein. This sword adds Atk+3 and acts as a melee bladetome by adding every point of buff to her Attack.

Fury is a common skill but still very good on Mixed Phase units, while Atk Def Link is absolutely perfect on a unit like Laevatein. This skill increases her Attack and Defense by 6 each when she or an ally uses a positioning Assist skill on one another- this alone will increase her Attack by 18. On top of this, Odd Speed Wave increases her Speed by 6 on odd-numbered turns, further increasing her Attack by another 6.

With the ability to increase her already-high Attack by 24, Laevatein seems like a no-brainer, but it's good to remember that her self buffs are conditional. She requires team support (via positioning or assist skills) and odd-numbered turns to reach her maximum potential.

Additionally, there's the problem of her Speed, which is in a rather difficult spot. She can likely double armored units and units who minimize their Speed for Quick Riposte, but she's left in the dust by the speedier sword metagame by a significant amount. While it isn't irredeemable by any means, she will have difficulty utilizing it for much more than avoiding doubles from enemy units, making her reliant on Enemy Phase combat with a Quick Riposte seal to secure doubles. With either a few more points to her Speed (from her Res) or a few less points to her Speed (into Atk/Def), Laevatein could have been one of the most powerful red sword units, but as it is, her waste of stats there puts her in the upper-middle of the pack.

Laegjarn sports the stats of a top tier duelist, with 32 Attack, 36 Speed, and 36 Defense. Her legendary weapon further adds 3 Speed to her stats, making her somewhat unique among red sword units with high Speed and Defense with reasonable Attack. The drawback to this is her very low Resistance of 17 and moderate HP of 41.

Unlike her sister, Laegjarn's skills aren't the greatest at synergizing with her natural stats or prf. R Duel Flying is functionally useless in every mode except for Arena and should be replaced unless you're using her to try for a better score. Furthermore, Distant Guard is more of a team support option more than it benefits her and is only noteworthy if you utilize dc/ranged enemy phase oriented units.

Chill Atk however, is a good B slot to have on her as it further increases her ability to tank her opponents powerful attacks and makes her far more durable.

Finally, there is her prf weapon, Níu, which grants her an all-stats-up of 50% of the total buffs oh her opponent (for example, if fighting someone with a +4 Attack buff, Laegjarn gets +2 in every stat). Níu is the very definition of a situational weapon, as it can be incredibly powerful when she's battling buff-heavy teams, but falls woefully short on teams where buffs are invisible or non-existent. However, it could be very useful on PvE challenge maps like Grand Hero Battles, where enemy units are predisposed to receiving large buffs, and makes her a good counter to units like Veronica, Sothe, and dragons utilizing Light Breath.

Helbindi's incredibly minmaxed stat spread is his greatest benefit, as it offers him a playstyle where he can play exclusively to his strengths and reduce his weaknesses. His Attack is moderately high at 35, with high Defense of 35, high Resistance of 31, and decent HP at 44. In exchange, his Speed stat is a pitiful 18.

Compared with the free Linus

Compared with the 3 star Bartre

Compared with the 4 star Hawkeye

Compared with the 5 star Dorcas

Helbindi's skills are good, though none of them help him particularly much in battle. Like Laegjarn, his A skill is somewhat pointless for his actual playstyle and stats and only comes into play fully if you intend on using him to score well in the Arena. However, he also carries the rare Guard, which denies his opponent their Special Cooldown if his HP is high, and Infantry Pulse, which reduces the Special cooldown of all of his allies by 1, provided they have less HP than him at the beginning of the map.

Through this it's clear that Helbindi is a master of cooldown manipulation, offering Special reduction as team support and defending himself by denying his opponents their Special activation. He's ultimately very, very difficult to kill by any opponent, and is capable of retaliating with a powerful Vengeance if he takes a beating.

Lastly, there is his own prf weapon, the Býleistr. His axe buffs himself and all of his adjacent teammates by +4 to all stats on every odd numbered turn.  While this is a massively powerful ability, it comes at the drawback of relying on turn number, meaning that on even-numbered turns, Helbindi essentially carries a 16 mt axe with no additional effects.

Here are some reasons to pull green orbs:

Here are a few reasons to not pull green orbs: