Should You Pull - Gifts of Winter Edition 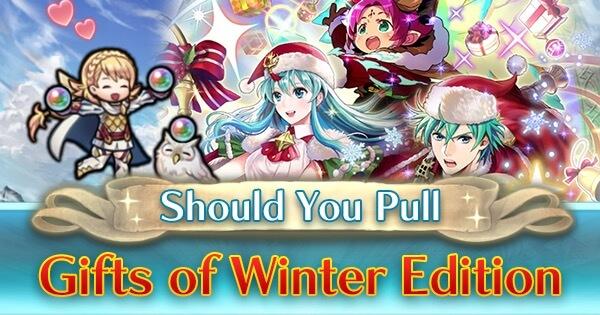 With this series, we hope to accurately represent the pros and cons of each new banner, as well as offering our own opinions on how worthwhile the banner may be. Everyone has different priorities and different affinities for certain characters or installments of the Fire Emblem franchise, however, so our word is not law- we simply aim to give our readers a complete picture of what each part of a new banner entails. With that in mind, let's get started!

In this banner, Fae is green, Ephraim is blue, and Eirika is colorless. The above numbers are calculated as your odds of getting one of the specific focuses - with no color sharing in the banner, your odds increase. Unlike most of the seasonal banners, this is a 3 unit banner, which meant that the rates are comparatively better.

More information on how these numbers are calculated can be found here, in our probability guide.

The almighty and beloved chicken returns as an armored dragon to complete the trio of armored young dragons. Fae is a defensive specialist, with 33 Defense and an astounding 41 Resistance. Fae is also our fourth unit with 180 base stat total, preceded by Legendary Tiki, Halloween Myrrh and most recently, Surtr.

Compared with the 3 star Sheena

Compared with the 5 star Surtr

Unfortunately, unlike all of the other 3 180 base stat total units, Winter Fae does not receive a prf weapon. The lack of a prf weapon also hurts her scoring potential in Arena and Arena Assault. She scores similarly to other Gen 2 armor units with a prf weapon.

However, her inheritable weapon is still a pretty good one. Similar to the prf weapons in the Bridal 2018 banner, Fae's weapon grants additional stats depending on the number of allies within 2 spaces. The main difference is that Fae gains Def/Res as opposed to Atk/Spd. Fae's stat distribution also makes her predominantly an Enemy Phase unit, which perfectly synergizes with this weapon.

She also comes with one of the better bonds in the game, Def/Res Bond, that further supplements her Enemy Phase play style. Coupled with Vengeful Fighter and Armor March, Fae is a very strong Enemy Phase unit out of the box and could be further invested into to make her an absolute juggernaut.

In a vacuum, Winter Fae is looking to be an excellent hero. Unfortunately, the world is not a vacuum. There are a lot of comparisons to be drawn to the other Gen 2 armor units, namely Fallen Robin (M) and Surtr. Both of these units sport a considerably higher Attack than Fae, and it could be argued that Fae's stats are rather poorly optimized, which makes her 180 base stat not as significant as it made out to be.

Fae's Speed stat is the highest of the three, which rarely comes into play due to the Fighter skills skipping most Speed checks. Furthermore, it is also not high enough to prevent opponent doubles, which essentially is saying that the stat investment in Speed is quite a waste for the most part. Speed is also a superbane on Fae, which will hurt her scoring potential should player chose to aim for a Speed bane.

Ephraim pulled a Hector by bringing his legendary spear Siegmund for the Winter Festival. As a unit, Ephraim's most noteworthy trait is his unprecedented 41 Attack. He also comes with very respectable stats throughout, with 36 Def, 29 Res and 45 HP. Similar to his Legendary form, Ephraim's whole kit revolves around being a lone wolf on the battlefield.

Compared with the 5 star Fallen Hardin

Compared with the 5 star Brave Hector

As said above, Ephraim has the highest Attack of not only the armored lances, but also all units as of the time of writing. This is further supported by having a superboon in Attack, his weapon, Festive Siegmund, and his base skill set. His weapon is a Slaying Lance that provides +4 to all 4 stats when he has no adjacent allies. He comes with a new skill, Atk/Def Solo, that grants an additional +6 to Atk/Def when Festive Siegmund's conditions were met, and he has Bold Fighter, which needs no introduction as a powerful Player Phase skill. All this adds up to an extremely powerful Player Phase unit, with also a rather formidable Enemy Phase simply due to the sheer number of in-combat stat bonus he gets.

However, there is an issue to his gimmick. While Solo skills work exceedingly well in the Player Phase, as an armored unit, going solo usually means losing mobility due to lack of Armor March for the next turn. This does mean that usually, Ephraim will prefer to only use Festive Siegmund's effect in the Player Phase, which somewhat stifles his flexibility.

This is compared to the other two 5-star armored lances in the permanent pool. Hardin with a Distant Counter weapon enables him to run the usual Mixed Phase build with Bold Fighter and Steady Breath, while Hector could also do very similar things with Quick Riposte in his prf lance. In all, Winter Ephraim has a very strong niche in exchange for potential awkwardness when utilizing his kit to its full potential.

Joining her brother from Renais, Eirika returns as our very first armored staff unit. However, rather than following her typical stat distribution of her other forms, Eirika follows the typical armor stat distribution by dropping her speed in favor of very strong mixed defenses with 30 Defense and 34 Resistance.

Compared with the 3 star Azama

Compared with the 3 star Wrys

Compared with the 5 star Mist

Eirika is not only the first armored staff unit, she is also the first healer that sports a strong mixed bulk and decent Atk. She is unlike any of the healers that are available in the summoning pool due to the above reasons.

Examining her default skills, she comes with a rather synergistic kit for support. The combination of Joyous Lantern and Atk Opening grants the ally (or allies) with the highest Atk +6 Atk, +5 Def and +5 Res regardless of positioning. This is potentially huge and it grants players an additional method of building team compositions. As the buffs are shared when allies jointly have the highest attack, it is theoretically possible to buff your whole team if your whole team has the same attack. Such a possibility is indeed very exciting.

While armor units have some of the highest combat potential, this directly contradicts the role of healers. Staff units do not have access to offensive specials, which makes utilization of Special charge acceleration in most of the Fighter skills rather awkward. Armor mobility also could be a potential problem, as staff units value its mobility when moving to their wounded allies. Fortunately, Wary Fighter exists, and it supports Eirika's mixed bulk rather nicely.