Should You Pull - Hostile Springs Edition 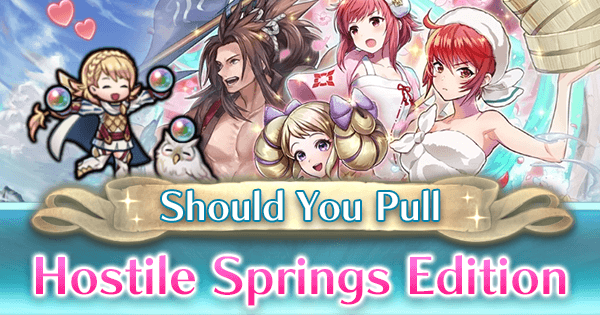 Ryoma has extremely similar stats to Tana, with just slightly better HP, Attack, and Defense, making him a small step up in comparison, though he lacks a prf lance. His Speed, while high, is not a standout among other lance fliers (with Shigure at 37 and Sumia at 39), and with only Chill Spd in his B slot to give him the edge in matchups, he may have trouble doubling faster units.

Compared with the 3 star Cordelia

Compared with the 3 star Catria

It’s Curtains For You!

Ryoma’s base kit and neutral stats lean him toward Enemy Phase combat, with a strong showing toward his initial combat, where he can use a his weapon in order to activate a 3 turn cooldown Special after being attacked in the first Enemy Phase. However, he will have issues with sustaining that level of offensive power- It’s Curtains… only applies its Special cooldown reduction at the first turn, leaving Ryoma with a regular 14 mt lance throughout the rest of the map.

Even then, he’s nothing to sneeze at. With his base kit alone, he can easily buff himself +6 Attack and +12 Defense, while potentially debuffing his opponent with -7 Speed. This makes him incredibly self sufficient when it comes to general combat, though you may want to replace his lance with a Slaying Lance if you intend on using him during longer maps.

Like Mikoto and Maribelle, Sakura focuses more on Attack than her other stats, leaving her with a rather mediocre Speed stat of 32. With her default Wrathful Staff, this can allow her to hit her opponents hard, but she will have difficulty doubling anyone with a meager investment in Speed. Still, her mixed defenses means that she will take slightly less abuse from dragons, and having a higher Defense stat is somewhat unique and allows her to bait and play more offensively with your team.

Compared with the 5 star Mikoto

Compared with the 5 star Halloween Mia

Like all healers, Sakura winds up being a remarkably solid choice as a team member for many teams, but does not bring anything particularly new or groundbreaking to the table. Similar to Ryoma, her weapon only reaches its maximum potential for one combat, after which she may as well be wielding a 12 mt Assault. This can be powerful for niche applications and is certainly nothing to sneeze at… but it’s nothing particularly head-turning either.

Spd Opening is likely the most attractive skill in her arsenal, but even that would likely be replaced with emblem-specific buffs on a flier team. On a mixed team, you could choose to run Guidance instead (or put it in her seal slot) for more maneuverability.

Elise is one of the faster dagger units in the game, tying with Felicia and Eir at 37 Speed, and 1 point slower then Legault and Ylgr. She backs up this impressive Speed with 33 Attack. Her Speed and Attack combined are the second highest among daggers, trailing behind Ylgr by only 1 point.

Compared with the free Eir

Compared with the 4 star Legault

Compared with the 5 star Summer Linde

Like many daggers, Elise's main utility comes in buffing and debuffing. With Rally Up Atk+, Elise grants a large +6 Attack to all allies win a 2 space AoE while simultaneously debuffing the Attack of foes in cardinal directions with Atk Feint.  Combine this with her dagger's AoE Def/Res -7 and you have a unit capable of supporting your main attackers through a variety of ways.

How much does this actually help her though? When comparing Red-Hot Ducks to Sylgr, it's clear that Sylgr is the more versatile of the two weapons, offering a smaller (but less variable) Attack boost, as well as a Speed boost to help outspeed the faster units in the game. Unlike Sylgr however, Red-Hot Ducks is inheritable to other dagger units, so you can inherit its damage-boosting effects to another dagger user if you like.

The issue here is that Elise cannot use any of the debuffs she provides for her team unless she's danced. Using her Rally skill consumes her turn so she can't attack an enemy who is hit by Atk Feint, and her dagger debuffs are all applied after combat, meaning that she functions best as a buffer/debuffer to enable her allies rather than a main attacker in her own right.

Hinoka has the coveted 35/35 Atk/Spd stat spread, making her tie with Hostile Springs Elise and come in second among all dagger users in terms of combined Attack and Speed. Her defensive stats suffer a little for this, but her higher Resistance is very useful as she can afford to minmax her defensive stats due to her dagger canceling out adaptive damage.

Compared with the free Eir

Compared with the 5 star Spring Kagero

Even with just a towel on, Hinoka finds a way to bring more mobility into the game for her fellow fliers

Let Me Bathe In Peace!

Hinoka is a unique ranged green unit who can serve as a flier team's counter to dragon and staff units alike- and that alone generally makes her an attractive option. With the unique utility of Air Orders to top it all off with, she makes a formidable team option, though she loses some of her luster when it comes to battling red units.