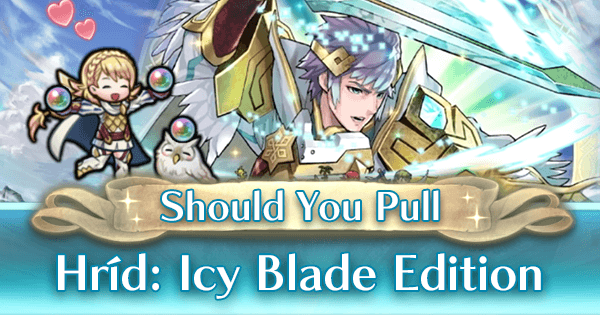 Hríd’s Attack and Defense are both obscenely high at 37 and 36 respectively. This allows him to hit hard and tank retaliation blows with ease, while his prf sword grants him automatic follow-ups while denying follow-ups to his opponent.

The concept of a slow and tanky red cavalier isn’t entirely a new one, but Hrid pushes the boundaries to new levels, brutally minmaxing his Speed so that he can invest fully into his Attack and Defense.

Compared with the free Xander

Compared with the 3 star Stahl

Compared with the 5 star Reinhardt (WT)

Hríd’s weapon, Gjöll, grants him guaranteed follow-up attacks against units who are debuffed. He also denies his debuffed opponents their own follow-ups, which actually makes his playstyle somewhat similar to Myrrh, with her Great Flame.

The Return of Distant Counter

Hríd, like all Legendary Heroes, has access to a unique skill. His is Freezing Seal, which automatically debuffs the ATK/SPD of his foe with the lowest Resistance stat.

Though it has overlap with Freezing Seal, Atk Smoke makes its return on Hríd as well. This can work with his overall flow of combat- the idea is for him to target the foe that he's debuffed with Freezing Seal and debuff all surrounding foes after combat, preventing them from being able to make follow-up attacks while reducing their damage against his already bulwark defenses.

For Hrid’s optimal setup, you may want to replace Atk Smoke with Def Smoke for more coverage in stat-related debuffs and to help him to secure KOs.

Here are some reasons to try your luck on red orbs

This is the first banner with two legendary heroes sharing the same color, making it somewhat noteworthy. If you still lack a legendary hero for both Water and Wind, then picking red may be a solid option for you. That being said, Legendary Ryoma is a solid choice and an exceptional red flier, with sky-high Speed, decent Attack and his legendary sword with built-in Distant Counter.

Wielder of the bladetome- er, blade and a plethora of self buffs to use it with, Laevatien is an excellent red sword who performs best when dueling others at melee range. Although her legendary blade shares the same properties as a bladetome, however, it’s not quite as effective due to targeting her foe’s oft-higher Defense stat.

A perfect foil to her brother Hrid, Gunnthra comes with her own Seal B slot, which debuffs her opponent with the lowest Defense while her Blizzard tome offers her additional Attack based off of her opponents debuffs. The two of them work extremely well together, though as one of the earliest Legendary Heroes, Gunnthra has fallen off somewhat in usage.

Summer Innes takes flight on a wyvern with a flag that is also somehow an axe. As a flying axe user, he has a unique statline among his peers (though it shares similar themes to New Year Azura) in that he is a high Speed axe flier. This alone makes him worth summoning for, as his nice balance of stats makes him very versatile, though with Cherche’s refined axe and better availability, it’s difficult to justify a position on a flier team.

Kana is a green infantry dragon unit with a very balanced stat spread, making her a strong competitor to Fae. However, she is markedly faster than her chicken dragon counterpart, which increases her tanking viability, at the expense of a few points of Attack and Resistance. Due to their open inheritance availability (being the only units in the game who get both emblem buffs and infantry’s wide array of skill options), dragons are highly desirable and one can make many hard-hitting builds with them.

A blight upon PvP modes everywhere is Legendary Lucina, a blue archer who can essentially ‘dance’ herself with Future Vision, her Assist skill which performs a Swap with an allied unit and gives her an additional turn of movement. With this skill, Lucina can easily outrange cavalry units and can have access to the vast majority of the map on turn 1. This makes her incredibly mobile and difficult to counter for many various teams.

Brave Hector isn’t just strong, he’s meta-defining. With a massive array of stats and ability to guarantee double attacks in either phase thanks to his prf and his B slot skill, he finds himself looking down on most units in the game from his position in Tier 1. He is an incredibly solid armor unit and his only real competition for a blue armor slot is Legendary Tiki.

While dethroned by Legendary Eirika as the fastest cavalier in the game, Summer Cordelia still holds the title for the fastest lance cavalier at a blistering 38 Speed, with 32 Attack to top it off with. This makes her a fantastic user of a Firesweep Lance build, or you could rely on her Speed to avoid doubles and tank with her moderate bulk of 28 Defense and 41 HP.

The old faithful, Legendary Robin returns to dominate the legendary hero colorless slot. Sporting a well-rounded stat spread, Legendary Robin is a fantastic addition to any flier team, though her lack of color specialization ultimately hurts her potential damage output. Still, it also makes her a better tank, as she has far fewer weaknesses.

On her third banner since her debut only a month and a half ago, Nina sports high Speed (tying for the fastest infantry archer in the game) with decently high Attack and moderate Resistance. Her default bow, the Shining Bow, deals more damage if her foe’s Defense is higher than their Resistance, helping her to neutralize enemies who stack on Defense.

Summer Noire reappears on the November Legendary banner alongside Nina, and the two share almost identical statlines, with their Defense and Resistance swapped. However, Noire also carries the Cocobow, which grants additional stats if the user initiates, and Infantry Rush, a skill that grants her nearby allies the effects of Heavy Blade- both of these make her a far better inheritance candidate than Nina herself.