Should You Pull - Kitsune and Wolfskin Edition 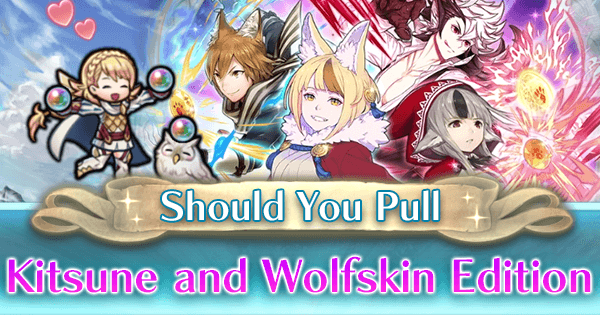 Keaton sports a massive Attack stat, the highest of all infantry users by some margin (the second highest, Soleil, is 38, 3 points below him). In addition, his Attack is further increased by 2 in his wolf form, giving him a final base Attack of 43 when transformed- this more than makes up for his somewhat low 9 mt of his Wolfskin Fang, leaving a neutral Keaton with 52 Attack altogether.

Keaton ties Lukas for the most Defense of any infantry unit at 38, giving him impressively-sturdy bulk to go with his high Attack. However, his Resistance is markedly low to make up for it, which gives him a clear weakness when it comes to skirmishes.

Compared with the three star Chrom

Compared with the 5 star WT Reinhardt

Compared with the 5 star Nailah

Return Of The Brave

Keaton is the first beast-type unit to wield a brave weapon- and in addition, he comes already with Special Spiral, making him an extremely valuable pickup for anyone who might be interested in beasts.  Keaton’s massive Attack enables him to use his brave weapon remarkably well on either phase, backed up by his massive Defense. His only weakness is his Resistance, making him excel at physical skirmishes, even against blue units.

Velouria is incredibly well-rounded, with a fantastic stat spread: at 35 Attack, 37 Speed, and 33 Defense, she can excel in anything a Summoner would want from her, and looks eerily similar to Nailah who came before her. While her Resistance is still one of her weaker stats at 23, it’s high enough that she can afford to take a solid hit, as long as she’s not doubled. In truth, the only thing that holds her back from meeting her full potential would be her colorless typing, which means that she will never be able to abuse weapon triangle advantage on other units.

Compared with the free Kana (M)

Compared with the 5 star Nailah

Velouria plays the role of offensive support very well, as she can utilize both her C slot and her prf to reduce her support partner’s Special Cooldown, while also buffing nearby beast allies.  Her support capabilities doesn’t mean she’s a slouch in damage either- with her own Special Cooldown reduction as well as the infantry beast buffs she gets from her weapon, Velouria can definitely pull her own weight, particularly considering her perfect statline of high Attack, high Speed, and high Defense. What more could a Summoner want?

Strangely, it seems that Intelligent Systems elected to make Kitsune their cavalry movement type, meaning that both Kaden and Selkie have lower than average stat totals. Still, Kaden sports a decent 32 Attack and 36 Speed, outclassing many other green cavaliers and bringing the beast class to another movement type.

Compared with the free Bridal Marth

Compared with the free Valentine's Titania

Compared with the 5 star Spring Alfonse

As expected of cavalry beasts, the Kitsune class suffers from lower base stat total, impacting their ability to be high tier in combat. While they make up for it in denying their foes’ followup attacks, it can still be difficult to utilize them in trench or forest-covered maps against foes with higher stats.

This shouldn’t dissuade a Summoner, however- Kaden’s stats are still very good for the sorely-lacking Green Cavalry unit type, and his additional prf effects will help both him and his allies tremendously in combat.

It’s rare that a combat-intended unit is released with below 30 Attack, but Selkie joins the fray with only 29, making her fangs feel more like pinpricks.  Thankfully, her Speed isn’t disappointing and ties her with Summer Cordelia as the blue cavalier with the highest Speed in the game. Her Resistance is also no slouch at 35, which makes the benefits of her prf even easier to utilize.

Compared with the 3 star Mathilda

Compared with the 5 star Summer Cordelia

Like Kaden, Selkie has a lower base stat total- unlike her father, she seeks to remedy this by using her prf, which gives her an all-stat up of half the difference between her and her opponent’s Resistance. Because her own Resistance is quite high, she will often have at least a few extra points in all of her stats when in combat to help mitigate her cavalier stats.

This can backfire on her though, when fighting an opponent with high Resistance, such as Winter Fae- Selkie will sorely miss her bonus stats and likely do poor damage as a result.