Should You Pull - The Land's Bounty Edition 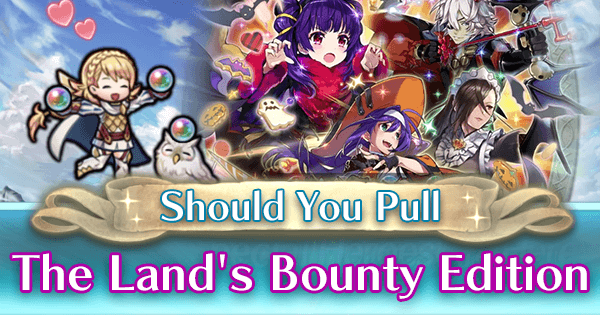 In this banner, Mia is colorless, Niles is blue, Kagero is green, and Myrrh is red. The above numbers are calculated as your odds of getting one of the specific focuses- with no color sharing in the banner your odds increase, but with a four unit banner, the odds of getting any specific unit is somewhat decreased.

More information on how these numbers are calculated calculated can be found here, in our new probability guide.

In a banner full of firsts, Mia flies in to save the day as the first ever flying staff unit in the game. Stat wise however, she's a little unremarkable, with mediocre Attack of 30, a passable Speed of 34, and a decent Resistance of 28. While her unique unit type and base kit are very nice, her stats barely stack up to other healers.

Compared with the 3 star Serra

Compared with the 5 star Elise

As far as her skills are concerned, Halloween Mia comes with the Witchy Wand, an inheritable staff that forcefully resets Special Cooldowns on her opponent and additionally resets Special cooldowns and inflicts the effects of Guard as a status effect in an AoE radius. This weapon is absurdly powerful against the oppressive armor meta and in the hands of any healer, it can singlehandedly turn an unwinnable fight (such as trying to attack into a Vantage unit with their Special primed) into a victory.

Otherwise, there's nothing particularly unique about Mia's skill set. Spd/Res Bond is a 5 star exclusive skill, but it's one of the worse Bond type skills, not really recommended as an optimal on other units, and would probably be replaced in her optimal build.

Finally, there is Hone Fliers, a skill that remains locked in the 5 star pool but isn't exactly rare anymore, as Mia is the fifth unit to have it. Obviously, the skill is extremely useful for a flier team and if you don't have it by now, it might be worth trying to obtain, but again- it's nothing new.

Continuing the trend of firsts is Kagero, who is the game's first armored dagger unit. Sporting a minmaxed stat spread and a BST that is 13 points higher than the dagger unit with the next highest BST, Kagero dumps her 21 Speed for an impressive 38 attack as well as a respectable mixed bulk of 32/33.

Compared with the free Felicia

Compared with the 5 star exclusive Flora

As far as her skills are concerned, Halloween Kagero comes with the standard Bold Fighter in her B slot, which more than makes up for her pitiful Speed by guaranteeing double attacks on the Player Phase. Additionally, she comes with Even Atk Wave, which is a fantastic skill for almost any unit with a spare C slot, as well as Mirror Strike, a rarer, but not quite as useful skill.

Finally there's her weapon the wi- er, juice, which inflicts guard on her opponent in addition to the typical dagger debuffs.

While Guard isn't generally the best skill for a B slot it's fantastic as a weapon effect, particularly when the HP requirement is dropped, and Bottled, um, Juice takes advantage of that. Unfortunately, being tied to a Dagger itself isn't ideal and it might be tricky to find a dagger unit who might want Bottled Juice over Barb Shuriken.

Following his daughter into the game is Niles, an armored archer dressed as the devil. Not only is he the first of the colored bows to be an armor unit, but he has the highest Speed of any bow user in the game at 39. The rest of his stats are fair to middling, with 34 Attack, 25 Defense, and 29 Resistance.

Compared with the Nina, a 5 star unit

Compared with the Halloween Jakob, a 5 star seasonal unit

Niles comes with the Devilish Bow, which keeps with the theme of the Halloween Banner by inflicting Guard on his opponent during combat. This is a fantastic weapon for archers and would do very well on archers with bulk who can sustain counterattacks while inflicting harsh Specials on their opponents.

In addition, Niles is the eleventh unit to have Swift Sparrow in his A slot, and so again, while it remains a 5 star exclusive skill, it’s not necessarily rare. What is rare however, is his Atk/Spd Link in his B slot, an extremely valuable skill that allows you to buff both yourself and an ally with +6 to Attack and Speed by using a movement assist on them. This is extremely valuable for Player Phase units and bladetome users, particularly in flier teams where Hone Fliers is rare and most teams run Reposition.

Rounding out the color trio of Armored Dragons is Myrrh, a red dragon now who is dressed up as… well, we’re not sure, but it sure is cute! Like Legendary Tiki, Myrrh is inexplicably an armor unit, and like Legendary Tiki, Myrrh is capable of reaching 180 in her Base Stat Total, making her the highest scoring unit in the game right now if you consider that L!Tiki won’t score as highly in non-Earth seasons. There’s not much to dislike about her stat spread: Myrrh tanks her Speed in order to carry a hefty Attack of 38, a Defense of 40, and a Resistance of 32. Very little will be even denting this dragon.

Compared with the free Garon

Compared with the Adult Tiki

Compared with the 5 star Legendary Tiki

Myrrh is one of the standout units of this banner, with an extremely impressive statline and a prf which is an inverse of her original form. Instead of denying enemy doubles, Spirit Breath allows Myrrh to double her opponent, regardless of Speed, as long as her Defense is at least 5 points higher than her opponent.

When it comes to the rest of her skills however, Myrrh doesn't really bring anything new to the table.Vengeful Fighter supplements Spirit Breath exceptionally well, but Def/Res 2 is… not exactly impressive, to say the least. Still, she can make good use of Armor March particularly when in a team with Legendary Tiki who would prefer to use her unique C slot skill.

She is relatively good fodder for an armor team however, given that she does have both a Fighter skill and Armor March.

The following are the reasons you should consider pulling red orbs for Myrrh:

And here are a few reasons you might want to stay your hand from Myrrh: