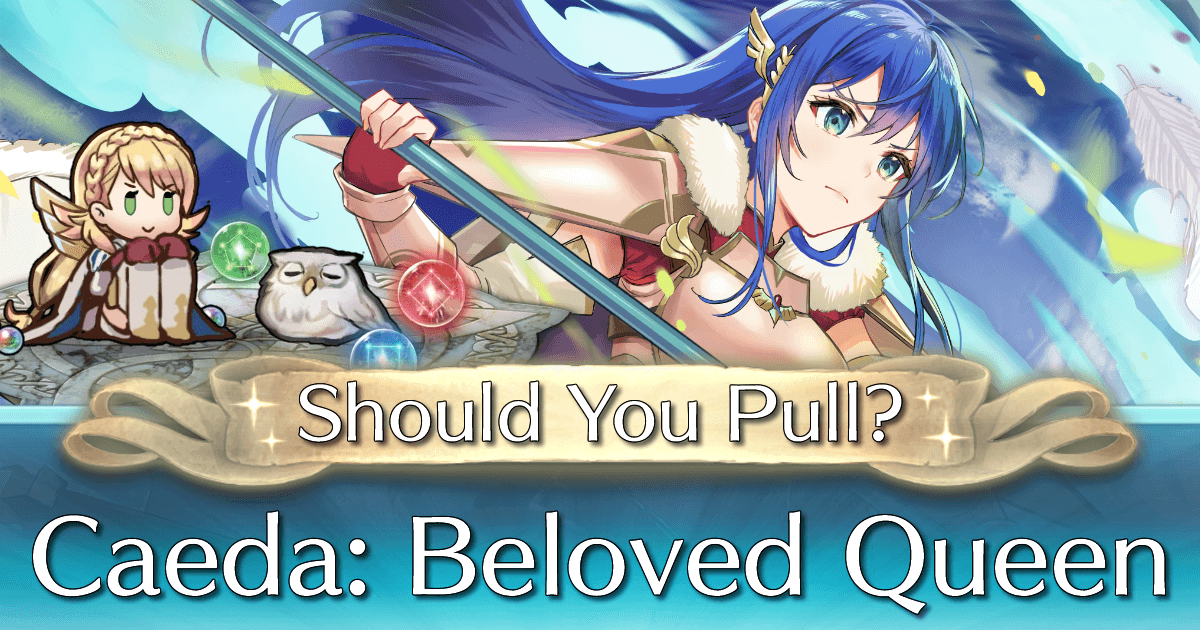 Legendary Caeda is here, with several of the same abilities as her previous incarnations as well as a couple new ones. But is her banner worth your orbs? Read on to find out.

Legendary Caeda is a Water Legendary Hero with the Pair-Up Effect. In addition to the effects that previous pair-up legendaries have had: increase in base stat total for scoring purposes (up to 190 in Caeda’s case, which is currently the highest available on a Legendary), ability to “pair up” in certain modes like Allegiance Battles, and boosting water-blessed allies’ HP by 3, she is also the first pair-up legendary to boost a stat other than HP, providing an additional boost of +3 Spd. This can be a useful effect if she is used with units that rely heavily on Spd.

Outside of her Legendary effects, Caeda is a lance flying unit with the unique lance Wing-Lifted Spear and the unique B skill Faithful Loyalty. Wing-Lifted Spear has several useful effects including Canto 2, Atk +3, Effective damage against armored and cavalry foes, a boost to all of Caeda’s stats under easy conditions, and the ability to buff Caeda and debuff her foe based on any visible buffs they have, essentially removing the buff from the enemy and giving Caeda an invisible in-combat buff equivalent, similar to how Binding Necklace functions. Faithful Loyalty, Caeda’s unique B skill, gives Caeda the ability to counterattack any armored or cavalry foes that attack her before their first attack, effectively giving her permanent Vantage against those types of units. It also neutralizes any effects that prevent her follow-up attacks, and after Caeda enters combat, it gives her a Vantage effect that is active against all foes until the start of her next turn.

In addition to all of those effects unique to Caeda, she also has the rare inheritable skill Atk/Def Rein 3, and a new inheritable skill Distant Storm, an upgraded version of Distant Counter that also boosts Caeda’s Atk by 5 so long as her HP is at least 25%, but deals 5 damage to her after combat if that Atk boost activated.

Caeda is a solid unit that can find some relevance in many different modes due to her strong damage against armored and cavalry units, Vantage, and Canto effect. If used in Summoner Duels, her Vantage makes her very difficult for cavalry units to initiate and KO, unless they have some kind of Hardy Bearing effect, and her Canto allows her to attack a unit and retreat further out of enemy range, a highly useful and widely used effect in Summoner Duels. She can also find some use in various Aether Raids teams; Canto is a very useful effect for Galeforce teams for instance. Overall, she is a unit with a unique combination of strengths that has many potential areas to shine.

The red units available this time are Reginn, Malice, and Sothis. Reginn is a slot-boosting Astra Mythic Hero that was available for free by completing the first chapter of Book V. She is a sword cavalry with a powerful Canto effect on turns 1 through 4, as well as the rare inheritable skills Swift Sparrow 3, Lull Spd/Def 3, and Panic Smoke 3.

Sothis is a Dark Mythic Hero. She is a red dragon infantry and confers a boost of +5 HP and +5 Res to Dark-blessed units when used in Dark season in Aether Raids. She possesses the rare inheritable skills Atk/Spd Solo 3 and Time’s Pulse 3.

Malice is a sword infantry. Her unique weapon Spendy Scimitar scales with the amount of dragonflowers she has been enhanced with. She has access to the rare inheritable skills Atk/Spd Push 4 and Spurn 3.

The blue units available this time are Caeda, Nott, and Legendary Fae. Nott is a slot-boosting Dark Mythic Hero with a weapon that grants the Pathfinder effect, allowing allies to move through her tile with no movement cost. She has the rare inheritable skills Distant Counter and Atk/Spd Menace.

Legendary Fae is an Earth Pair-Up Legendary Hero. She is a blue infantry dragon with a unique version of Miracle, Life Unending, that charges at the start of turn 1 and allows her to survive any single hit with 1 HP remaining, then heals her by 99 HP after that combat. She has access to the rare inheritable skills Distant Stance, Dragon’s Ire 3, and Def/Res Menace.

The green units available this time are Legendary Edelgard, Astrid, and Triandra. Legendary Edelgard is a Fire Pair-Up Legendary Hero. She is an axe armor with a unique B skill, Raging Storm, that allows her to act again after combat once per turn. She has access to the rare inheritable skills Atk/Res Solo 3 and Armored Stride.

Astrid is a green bow cavalry. She has a unique weapon, Damiell Bow, that grants Bonus Doubler and the movement-boosting March effect to any ally that is the target of her Rally Assist skill. She has access to the rare inheritable skills Rally Atk/Def+, Spd/Def Bond 4, and Atk/Def Ruse 3.

Triandra is a Dark Mythic Hero. She is a green tome flying unit with a unique variation of Dance, Frightful Dream, that can apply a Guard effect to foes in the same row or column as her or her target. She has access to the rare inheritable skills Atk/Spd Push 4, Aerobatics 3, and Spd/Res Rein 3.

The colorless units available are Legendary Corrin, Legendary Leif, and Ascended Laegjarn. Legendary Corrin is a Wind Pair-Up Legendary Hero. She is a colorless infantry dragon with a unique Special, Negating Fang, that activates to reduce the damage from an attack she is hit by and then boost her next attack’s damage by 30%. She has access to the rare inheritable skills Distant Counter, Shield Pulse, and Joint Drive Atk.

Legendary Leif is a Water Pair-Up Legendary Hero. He is a colorless bow cavalry with the unique bow Meisterbogen, essentially a more powerful Brave Bow+, as well as the Special Njorun’s Zeal, which can allow him to act again once per turn. He has access to the rare inheritable skill Atk/Res Push 4.

Ascended Laegjarn is an Ascended Hero and a colorless bow cavalry. The first time players summon her, they also receive one Ascended Floret, which can be used to ascend a second Asset on any hero of their choice. Laegjarn herself can also receive a second Asset without using a Floret. She has the rare inheritable skills Swift Sparrow 3, A/D Far Trace 3, and Rouse Atk/Spd 4.

Each player will have different wants and needs, so it is impossible to make a recommendation that will suit everyone. However, we can broadly assess the value on each color.

Red offers a good Astra Mythic with some useful skill fodder in Reginn, a somewhat bad Dark Mythic with decent fodder in Sothis, and a solid sword infantry with Spurn in Malice, who may struggle to stand out in the sea of fast swords with unique weapons. Overall, the value is not incredible, with no Legendaries and only one offense Mythic. Players merging Reginn may gain some value from Sothis or Malice, either to use, or for their rare skills like Time’s Pulse and Spurn.

Blue is probably the most valuable color this time around, as the color of the new Legendary often is. Caeda herself is a very versatile unit and has a new, desirable version of Distant Counter that some players might want to pass to a favorite unit. Fae is a solid choice for an Earth Legendary, and also has some extremely useful skills like Distant Stance, which is a strict upgrade over Distant Counter and currently only available on Fae, and Dragon’s Ire. Nott likewise has the useful skills Distant Counter and Atk/Spd Menace, while also being arguably the best Dark Mythic Hero available at this time. All of these Heroes are good choices in their respective modes, and have great skill inheritance if a player prefers to pass skills to other units.

Green offers relatively low value with a single Legendary, Edelgard, who is currently a somewhat awkward choice to use in Arena due to her inability to effectively utilize skills like A/D Near Save due to her B skill and weapon only activating if she is not adjacent to an ally. She is a decent choice, but outclassed by other options if the player is choosing what to spend orbs on. Triandra is still a solid choice for Dark Mythic Hero, arguably the second best available after Nott, that is useful across many teams. A single copy of her could be highly useful to players wishing to build a good Dark defense. Astrid is an interesting choice, but her rally-focus is generally awkward to use in most modes outside of teams that are specifically built around it. None of these Heroes have highly relevant inheritable skills either, though they do all have some rare options.

Colorless offers great value to players that are already merging up Corrin and Leif for use in Arena, or merging up just Leif and can use the skill inheritance from Corrin and Laegjarn. Laegjarn also has value as a single copy if players have not already summoned her previously, due to the free Ascendant Floret. She has solid combat in various modes with her unique weapon, and great inheritable options like A/D Far Trace as well. Leif is the weakest link for inheritance; while he is still a solid choice of Legendary for an Arena team, his inheritance is limited to the mediocre Atk/Res Push 4.

Of course, one must also consider the opportunity cost, as with all things in FEH: orbs are a limited resource, limited either by time or by money, and should be spent wisely. The voting gauntlet for this year’s A Hero Rises has just concluded, with Ninja Corrin (F) as the winner, and a Summoning Focus featuring her, Hatari Azura, Thorr, and Legendary Male Byleth is coming later this month. That is one option players might wish to save their orbs for - there are of course many others as well. But Caeda’s banner does offer decent value as well, particularly the blue units, should one choose to partake.

Update thread July 2022
The Next Update Is on Its Way! Thank you for playing the Fire Emblem Heroes game! Here…
What are yalls thoughts on PRF skills?
Do yall think it’s based on favoritism/popularity? Or is it rooted more in a unit’s…
New Elincia project
I am planning to build Elincia since I find her bow to be real interesting but I’m…
Show off your summons: Legendary Xander
Surprised nobody made one yet Anyway personally skipping this one but did do my first…
Luck turned me into a monster
This is it ! Sigurd finally got to +10 ! …yep, I’m now one of those horrendeous…
Read More