Should You Pull - New Year's Of Fire And Ice Edition 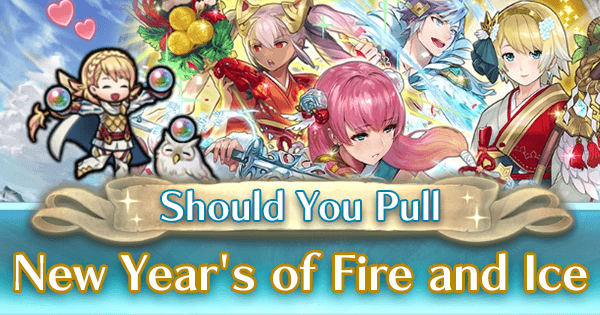 Note that the red odds are for getting a specific red focus.

With 37 Speed, New Year Gunnthrá is one of the fastest sword fliers, only slower than Legendary Ryoma who has the same Attack as her. She also has a high Attack of 34, matching Legendary Ryoma and Elincia both.

Gunnthrá has 27 Defense and 26 Resistance, giving her impressive mixed bulk and allowing her to easily take a hit from any opponent. Though she isn’t a tank by any means, her high Speed helps her avoid being hit twice, making her fairly flexible to use against any opponent.

Compared with the 3 star Caeda

NY!Gunnthrá is the only unit on this banner with a prf weapon, her Hikami. While it follows the same concept as the other New Year weapons, its application makes it easier to take advantage of its debuffs.

A New Kind of Buff

NY!Gunnthrá is the first unit in the game with a Joint skill in Joint Hone Spd, which buffs herself and all adjacent allies by +5 Speed for 1 turn.

Between her buff and debuff capabilities present in her base kit, it’s clear that Gunnthrá is meant to support her team via buffs, and the best part is that she isn’t limited to a flier team to do so: all of her buffs and debuffs apply regardless of her teammates, making her fantastic in a mixed emblem team.

However, her excellent stats and 16 Mt weapon also means that Gunnthrá is capable of holding her own in combat, particularly because the vast majority of units attacking her will be suffering under Hitami’s debuff since it hits the closest foe.

New Year Hríd has the highest Attack of red fliers by far, with 38 (the next highest being 34, with Elincia, Legendary Ryoma, and NY!Gunnthrá).

With 36 Defense (tied with Laegjarn for the highest Defense among red fliers) and a respectable 27 Resistance, along with 42 HP, Hríd is a remarkably sturdy wall, though he pays dearly for it with his 19 Speed, meaning he’ll almost always be hit twice, even by slower units.

Compared with the 5 star Laegjarn

Hríd has no unique skill or prf, but he does have a playstyle that’s all about him tanking through loads of enemy damage and dealing high damage in return.

While Hríd is a new archetype of unit (no other red flier has “low Speed/high Attack and Defense” as a concept), he doesn’t pull the niche off as well as his red cavalry form because he lacks the powerful Gjoll. He is also hampered in his unit class due to flier inheritance restrictions: being unable to learn any of the Breath skills hurts his damage potential immensely and he must simply rely on raw stats to survive and do damage in combat.

Granted, those raw stats are very high and will often prove to be enough, but this essentially makes Hríd something of a stat stick: useful, particularly in Enemy Phase, but with little other finesse or utility that he can bring to the team.

New Take On The Same Stats

While her Attack and Speed are the same as Summer Takumi’s and similar to WF Hinoka’s, Fjorm is a green bow unit, giving her Weapon Triangle advantages and disadvantages in her various combats.

Compared with the 5 star Legendary Lyn

Compared with the 5 star Summer Takumi

Fjorm’s stats and skills are all based around enhancing her Attack and Speed so she can attack twice with massive damage.

NY!Fjorm is the first non-legendary green archer in the game and the first colored bow flier

Fjorm is a powerful archer, but whether she’s limited or enhanced by her having a color designation is up to you. She won’t struggle to double many blue units, particularly lance units, as the majority of them aren’t as fast as her and she can hit higher Speed caps with investment. However, red units are likely to walk all over her, as she will not be able to outspeed them and her defenses are somewhat limited.

As a green unit, she’s a great option for a team but won’t score as highly in Arena due to her lack of prf and lower stats overall.

Tied with the new Winter Eirika for the highest Attack of all healers at 36, Laevatein is far more mobile in her offenses, allowing her close to full map coverage with her staff. Unfortunately, she also carries her mediocre Speed over from her infantry form, which, at 30, leaves her in an awkward spot when it comes to combat capability.

While 27 Defense may not seem high for a combat unit, it’s rather high when compared to other healers and the highest for all cavalry healers, eking out Ethlyn who has 26. This can make Laevatein deceptively tanky and capable of taking a hit- if her low HP stat of 33 doesn’t let her down.

Compared with the 5 star Maribelle

New Year’s Laevatein comes with almost everything a healer needs to be good.

Too Many Niches, Not Enough Stats

Like many other ranged cavalry units, Laevatein spreads herself a little thin while trying to cover all of her bases.

Overall, Laevatein is comparable to the many cavalry healers who came before her with the exception of her high Attack stat, which she shares with healers like Maribelle.  Since she has no unique or exclusive skills, she doesn’t bring much else new to the table.

Still, she’s solid in her niche and having a healer on your side is never a bad option, considering the incredible amount of utility they can bring onto the field.