Should You Pull: Nohrian Dusk Edition 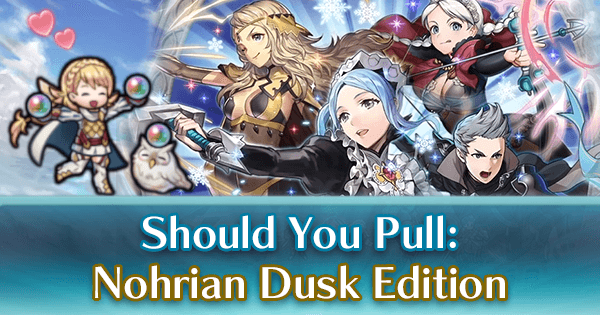 Good evening and welcome to Gamepress’ second installment of “Should You Pull?”, a series that analyzes new banners to give summoners an idea of the contents of these banners, how new units and skills relate to gameplay and meta, percentage odds of getting each individual unit, and of course, an idea of whether or not you should use your hard-earned orbs on them.

The table above is the result of 10,000 summoning simulations and should be read as your percentage chance for pulling a specific unit when color sniping in X amount of orbs, where X is the number in the Red, Blue, or Solo Blue column.

The unfortunately obvious demotion, Silas finds himself adding to the bloat of the blue lance cavalry pool, where he adds to a low Speed/high Attack and Defense niche that Quan filled only a week ago. However, Silas trades even more Speed for higher Defense, making his stats ultimately thus far the best general spread to run a defensive, Enemy Phase oriented build among other blue lance cavalry.

Compared with the free Finn

Compared with the free Clive

Compared with the 5 star Exclusive Quan

Skillwise, Silas is above average with a good array of skills to choose from. He carries the ever-popular Reposition of course, but also Steady Stance 3, a skill formerly only found on the limited Black Knight and 5 star exclusive Shiro. In addition, Silas has Even Def Wave, a new skill which raises his Defense by 6 every even numbered turn. With both of these skills combined with his neutral Defense stat, Silas’ default kit will give him a Defense of 48- on even numbered enemy turns, that is.

While his B or S slot may be crying out for Quick Riposte, Silas finds himself standing as one of the better Enemy Phase lance cavalry- though unlike Quan, he lacks a legendary weapon to make up for his penalized cavalry BST. Ultimately, the predicament is the same: Silas being cavalry means that he gives up part of his Base Stat Total for an extra tile of movement, which he largely will not need due to his niche as an Enemy Phase unit. This contradictory playstyle means that, while he’s optimal for his role, he’s not going to be as effective as a unit compared to another movement type.

With a fantastic Attack of 37, decent Speed of 33, and mixed bulk with low Res for a blue mage, Ophelia enters the blue mage pool with a Slaying Tome, which just so happens to synergize extremely well with the new Special Spiral skill.

Compared with the free Saias

Compared with the 3 star Mae

Compared with the 5 star exclusive Ishtar

Compared with the 5 star Exclusive Linde

Ophelia comes with the non-seasonal exclusive version of Chill Res and is the first summonable unit to carry this skill since Spring Catria. In addition, she has a new Rally skill in Rally Up Atk+, an Assist skill which grants Atk +6 to the target and any allies within 2 spaces for 1 turn.

Finally, Ophelia comes with the legendary Missiletainn, a prf Slaying tome which reduces her Special cooldown by 1, and then additionally reduces it at the beginning of the map for every magical ally on her team. This makes her a great unit for multi-map modes such as Tempest Trials. This also synergizes extremely well with Lewyn’s Special Spiral skill, which gives her the ability to fire off 3-charge Specials on her initiation every single turn (or 4 charge AoE Specials).

Ultimately, Ophelia’s Attack is the highest of the current blue mages, but she suffers a little when it comes to her comparative Speed to other 5 star exclusive blue mages. Her mixed bulk is somewhat unique as well, with lower Resistance than normal, traded for higher Defense- she must have inherited this from her father.

Zipping into the new archer slot is Nina, a unit currently tied for the highest neutral Speed among archers with 37. For this, she trades a very low Defense of 16, maintains a high Resistance of 31, and an average Attack of 32.

Compared with the 3 star Niles

As far as her skills are concerned, Nina has a new inheritable bow, Shining Bow, which deals an additional 7 damage if her foe’s Defense 5 or more points higher than their Resistance. This is a bit of an odd weapon in practice, but it essentially means that Nina should be fighting physically bulky units- the only drawback to this is that her own pitifully low physical bulk of 51 will likely result in her death if she initiates on a high-Defense unit with Distant Counter.

Still, she also comes with the new Spd/Res Link skill, which raises her and her ally’s Speed and Resistance by 6 after a movement Assist skill is used between them. This is a good skill for her stat spread, as it allows Nina to essentially raise her two best stats. Additionally, she comes with Bow Valor, which- while useless in combat- is a nice tool to train other bow units with.

Ultimately, Nina is a bit odd of a unit- clearly from her stats, she’s meant to be fighting mages, but her bow gives her incentive to take matchups with physically tanky units, which generally would retaliate into her lower Defense (provided they have ranged counter abilities). It’s likely best for her to abandon the Shining Bow and instead pick up a different weapon, such as a Slaying or Firesweep Bow in order to best capitalize on her stat spread without intentionally pitting her against the units she’s weaker to.

Conversely, here are a few reasons to leave the colorless orbs alone:

With one of the most complicated prf weapons in the game thus far, as well as the first non-seasonal colored dagger Flora will be considered by many to be the prize unit of this banner. With a jaw-dropping Resistance of 38 and a decent Attack of 34, Flora essentially min-maxes her stats by dropping her Speed drastically to 23 and her Defense to 18.

Compared with the free Felicia

Compared with the free Kaze

Compared with the 3 star Kagero

Flora is one of the most unique units that we’ve had in a long time, as there are no other units who come within a +/- 10 stat point range of her stats. In addition, her Hoarfrost Knife adds a plethora of utility, decreasing her Special cooldown by 1, guaranteeing a follow-up attack if her foe can counter, inflicting the typical dagger Def/Res -7 after combat, and most notably, granting her +20 Defense if she initiates combat on any non-ranged unit.

This grants Flora the ability to do several things: initiate on dragons who tout adaptive damage with an immune 38/38 Def/Res spread, initiate on armors with Distant Counter and guarantee a follow-up attack, initiate on mages and wall them off with 38 Resistance and a guaranteed follow-up attack, and set up massive debuffs on her surrounding foes for her allies to take advantage of.

Her other skills of note fit right in with her dagger- Atk/Res Solo, the first skill of its kind, grants her additional Attack and Resistance if she is not adjacent to an ally. Quick Riposte and Def Ploy are both older skills, but both synergize reasonably well with her kit, with Quick Riposte granting her the guaranteed follow-ups in Enemy Phase that her weapon lacks.

The following are the reasons you should consider pulling red orbs for Flora:

And here are a few reasons you might want to stay your hand from Flora: