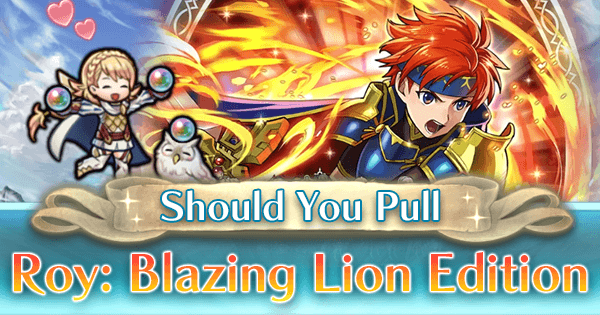 Legendary Roy comes with a balanced mix of Attack, Speed, and Defense, all of which being great. He possesses a similar stat spread to that found on units such as Ayra, Legendary Marth, and Owain, all of which he trumps in terms of raw stats thanks to his 169 BST.

Legendary Roy is somewhat lacking in the HP and Resistance department, but even then, these stats are not bad. While he is in the lower end of total HP for sword users, his Resistance is still in the higher end. With everything considered, Legendary Roy really has no stat that could be called flat-out bad.

Compared with the five star Owain

Compared with the five star Ayra

This Sword is on Fire!

Legendary Roy also comes with his own C slot skill, Human Virtue. When Legendary Roy is adjacent to any allies which are not beasts or dragons, he will grant himself and those allies with +6 Atk/Spd.

Roy is not the only legendary hanging around in the red orbs this banner, as Prince Hríd of Nifl is also here. With amazing Attack and Defense, a fantastic personal weapon that helps majorly with his combat potential and poor Speed, innate Distant Counter, and a personal B slot skill that makes activating his weapon easier, Hríd is a fantastic pickup for anyone looking for a strong sword cavalier. Even if you aren’t, he’s still fantastic fodder thanks to carrying Distant Counter.

A more in-depth analysis of Hríd can be found in the Should You Pull article for his original Legendary banner, located here.

If you are looking for a powerful refresher to use in Aether Raids that isn’t Legendary Azura, then Hoshidan Summer Micaiah is a great choice. Her personal weapon, Dawn Suzu, grants her with effective damage against both armored and cavalry foes, making her extremely useful for dealing with tougher foes on AR defense such as Surtr. Even when not considering her weapon, simply being a refresher makes her a powerful support unit no matter the team.

Legendary Ephraim is one of the most divisive units in Fire Emblem Heroes history. He has the potential to be incredibly strong, but this is not always the case in practice. This stems from his personal weapon, Flame Siegmund, which grants him a guaranteed follow-up whenever he has more enemies than allies nearby. Combined with his high Attack, Legendary Ephraim can deal extremely high amounts of damage. However, that requirement to be ideally away from his team makes it much harder for him to enjoy buffs and can leave him vulnerable. Still, his raw power potential cannot be ignored. Play to his strengths and Legendary Ephraim can be a formidable force.

Halloween Niles is a blue bow armored unit. He possessed amazing Attack and Speed, making him fantastic when used with weapons such as Brave Bow to deal amazing amounts of damage. Being armored, he also enjoys higher BST than most other archers while also having access to powerful skills such as Special Fighter. He is held back by the lower natural movement of armored units, but this issue can be circumvented through the use of Armored Boots or Armor March. He also comes with great fodder such as Atk/Spd Link and the not-so-rare Swift Sparrow.

A more in-depth analysis of Halloween Niles can be found in the Should You Pull article for the Land’s Bounty banner, located here.

Adrift Corrin (M) is a blue dragon infantry and one of the strongest blue dragons currently available. He not only comes with excellent Attack and Speed, but also comes with Draconic Rage, a strong personal weapon that gives him accelerated Special cooldown and a large offensive boost whenever he has more allies than enemies nearby. He also carries Null Follow-Up, an infantry exclusive B slot skill that disables skills such as Bold Fighter, Wary Fighter, and Quick Riposte on the enemy. If you want this skill, Adrift Corrin (M) is presently the only unit who comes with it naturally.

A more in-depth analysis of Adrift Corrin M can be found in the Should You Pull article for the Adrift banner, located here.

The eldest Princess of Nilf and the second Legendary hero ever, Gunnthrá is a powerful green tome cavalry unit. Blizzard, her exclusive tome, grants her with a damage boost equivalent to the total amount of debuffs on the foe. This synergises well with her personal B slot and Res Ploy which she carries naturally. She can serve as both a powerful offensive unit and debuffer at the same time, making her a overall solid choice.

The man that absolutely everyone hates with literally zero exception, Surtr’s reputation as one of the most annoying characters to fight is undeniable. His absolutely min maxed statline combined with Sinmara and Surtr’s Menace makes him incredibly strong and very hazardous to even attempt to engage without being absolutely certain of safety. He is also fantastic fodder, coming with Steady Stance 4.

Adrift Corrin (F) is a green dragon infantry and, much like her male counterpart, is one of the strongest in her class. She also comes with Draconic Rage, accelerating her Special cooldown and boosting offensive stats then she has more nearby allies than foes. She also comes with very strong base Speed and respectable Attack and Defense. In terms of skills to fodder, she has Rally Atk/Spd+ and Atk/Spd Bond.

A more in-depth analysis of Adrift Corrin F can be found in the Should You Pull article for the Adrift banner, located here.

By far the most common Legendary unit in the game in terms of banner appearances, Legendary Robin is a colorless flying dragon. She has a very respectable statline with high Speed, good Attack and HP, and acceptable Defense. She also has Expiration as her personal weapon which grants her Distant Counter and her own personal A slot, Dragonskin, with grants her with immunity to flier effective weapons and extra defensive stats when attacked. She is also currently the only unit with Res Smoke.

Hoshidan Summer Xander is a dagger infantry refresher with a focus on physical defensive capabilities. While his Attack and Defense are both great, his Speed and Resistance are both pitiful and he will be defeated very quickly by almost any mage. His default weapon, Dusk Uchiwa, does allow him to negate skills like Vantage and Desperation while also granting him effective damage against cavalry. One undeniable fact about Hoshidan Summer Xander is his amazing use as fodder, carrying Close Counter, Quick Riposte, and Odd Def Wave. He also has the objective best dance animation in the game.

Mikoto is a infantry staff unit and one of the best available, being roughly on par with Loki with a few noteworthy drawbacks. She comes with solid base Attack and passable Speed, though she may struggle to perform follow-ups without support. She comes with Flash, a powerful weapon that applies a debuff that prevents enemy counterattacks. She also carries Infantry Rush, a rare C slot that allows nearby Infantry to utilize Heavy Blade.

A more in-depth analysis of Mikoto can be found in the Should You Pull article for the Adrift banner, located here.