Should You Pull: Rulers of the Laguz Edition 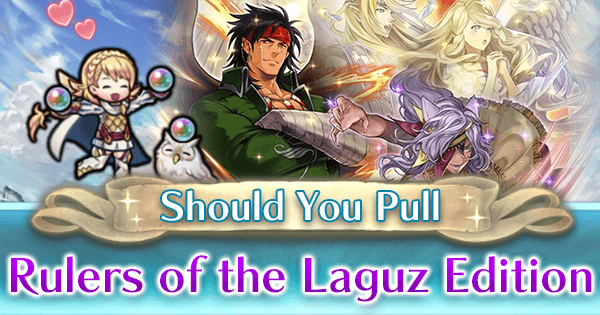 This banner contains our first ever beast units, from the Tellius games, and so this section will deal with a quick overview of this new unit type.

Beast units possess the ability to shapeshift into other forms

When transformed, beasts enjoy a variety of buffs, seemingly linked to movement type

Beasts remain transformed or in human form until the end of the Enemy Phase. Their next opportunity to transform or revert to human form is at the beginning of the next Player Phase, where they will remain transformed or untransformed if the conditions are met. You always want to be careful of positioning beasts. It is optimal to end your turn with them next to dragons, other beasts, or no units at all.

Beasts are restricted in their choice of teammates

Obviously, beast units are best in teams with other beast units or dragons, as it becomes easier to position them when you don't have to worry about accidentally reverting them to their human form.

As a note, beasts will always transform for combat, regardless of whether or not they are considered “transformed” on the field (likely due to animation recycling). Don't be fooled into thinking a beast will get its buff during combat if they start out in human form!

Tibarn: Lord of the Air

With 38 Attack, Tibarn is tied New Year Hríd for the highest Attack among red fliers. Unlike Hríd however, Tibarn also has a serviceable Speed stat at the expense of his Resistance and a few extra points off of his Defense.

With high Attack, good Defense, and workable Speed, Tibarn is a fantastic duelist and is capable of trading blows with other physical-based heroes. His weakness is his Resistance and his Speed- while the latter can be improved through Assets and buffs, he will never be a speed demon and can easily be doubled by faster units during Enemy Phase.

Tibarn is the first of the beast units to be teased to Fire Emblem players and he did not disappoint. With the combination of Hawk King Claw and his natural beast abilities, he proves to be an extremely powerful Player Phase unit with potentially 3 tile movement and base 57 Attack in his beast form.

Aside from, well, beast units, the biggest talking point on this banner is Sturdy Impact, Tibarn’s A slot skill that grants an attacker Attack +6 and Defense +10 while preventing foe’s follow-up attack. This is an incredibly flexible skill and can go on many archetypes of units, but is only inheritable to fliers and infantry.

Tibarn’s base kit and beast class alone make him a powerhouse worth pulling for, as his base kit offers him conditionally 70 Attack and 44 Defense with guaranteed follow-ups and negation of opponent follow-ups. He will easily be able to handle most, if not all green units in the game, as well as the vast majority of red units. He even has nothing to fear from meta staples like Ayra and Karla, as he can simply prevent them from doubling him during his turn.

This all comes at varying conditions, however: Tibarn will be far weaker during Enemy Phase, where myrmidon units can easily double him with his poor Speed stat and he lacks the massive Defense of his A slot skill. In addition, he is a bad choice for dealing the finishing blows on an opponent, as he doesn’t get his guaranteed doubles against opponents with less than 100% HP- this also makes him a poor choice to run on any team that relies on AoE chip damage, such as Savage Blow or Pain.

Like many dancers before her, Leanne shows the typical High Speed/High Resistance combo, though she takes it a bit further with 37 Speed and 34 Resistance. She compensates for this by having a poor Attack of 27 and a pitiful Defense of 16.

Leanne ties Eir for the fastest colorless flier and is the fastest refresher in the game, with Silvia hot on her tail with 36. She also ties Dancer Micaiah for the highest Resistance among refreshers.

Being a heron comes with its advantages in both field buffs and movement abilities.

Unlike dragons who had to wait almost a year for their buffs, beasts have no such limitations

Leanne is one of two dancers on this banner and arguably the better of the two, with min-maxed Speed and Resistance, arguably the better of the beast buffs, and no inherent color weakness for opponents to take advantage of. Her low Attack is fixed somewhat between her beast transformation and her native Mirror Stance (note that it’s useful to give refreshers Enemy Phase skills since they will likely be spending their own turn refreshing their allies), and though her B slot will generally need replacing if you intend for her to be in her heron form, her overall kit is solid.

Reyson is the more balanced of the two herons on the banner, statwise, with +1 HP, +2 Attack, -3 Speed, +8 Defense and -8 Resistance when compared to his sister. While this makes him less likely to tank an incoming attack from a mage, he won’t crumble at the first sight of a sword or spear either. This also means that he can be a better generalist if you are set on merging one of the two.

Reyson’s movement, healing utility, and beast effectiveness is the same as his sister’s, though he comes with a slightly different base kit

While her Speed is the only stat that stands out at 37, Nailah sports a very attractive set of Attack and Defense at 31 and 32 respectively, making her ideal for dueling and allowing her to go toe to toe with the meta red units without being doubled.

Though her Resistance is somewhat low at 23, it’s enough for her to withstand a neutral blow of up to 63 damage from any mage and they’d be hard pressed to double her with that impressive Speed stat. Enemy units will have a hard time exploiting any weaknesses in Nailah’s statline.

As our first and only infantry beast thus far, Nailah sets quite the precedent.

Nailah brings with her two new incredible skills and one of the most coveted skills in the game’s history- and they’re all inheritable.

True to her original appearance, Nailah is a fierce warrior and good queen. Her Heroes iteration is immensely powerful, with both amazing skill inherits and fantastic combat utility.