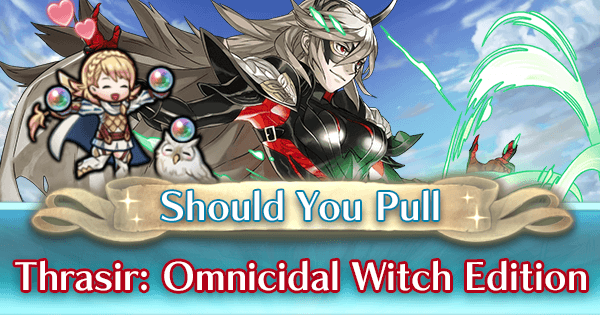 Finally making her debut as a playable character, Thrasir: Omnicidal Witch boasts one of the greatest offensive statlines seen on a ranged unit; 33 Attack and 39 Speed (which can be bolstered to incredulous heights with her four-point Asset in this stat) provide her with a fine baseline for dealing damage and performing follow-up attacks. Her overall bulk is surprisingly decent as well despite her statline’s focus on her offensive stats. Paired with her high Speed, this renders Thrasir quite difficult to take down should one be unable to OHKO her, especially when the added effects of her PRF skills start kicking in.

Compared with the five star Lewyn

Compared with the three star Nino

Thrasir’s personal tome, Ífingr, comes packed with a number of different attributes: effective damage against dragon foes, a negation of all skills that ensure her opponent’s follow-up attack, and a substantial +4 in-combat boost to all of her stats provided that she is within three spaces of any given ally. Following the conclusion of combat, however, Ífingr will also apply an equivalent -4 debuff on all the stats of the nearest ally.

Similarly to all other Legendary and Mythical Heroes before her, Thrasir also comes with another exclusive skill of her own: Killing Intent. Against opponents at less than full HP or those afflicted by any type of status ailment, this skill applies a sizeable -5/-5 Spd/Res in-combat on her foe and allows Thrasir to perform consecutive follow-up attacks upon initiation.

Sharing the limelight with Thrasir as another defensive Mythic Hero available in the green pool, Yune remains one of the better green mages around thanks to her exceptional mobility as a flier and the considerable offensive might of her exclusive weapon, Chaos Manifest. Her unique C slot skill, Chaos Named, synergizes perfectly with her PRF and provides her with great supportive potential, applying a notable -5 debuff on the highest stat of foes within three columns. Although she is a bit limited in terms of Skill Inheritance fodder, it’s worth noting that she is currently the sole carrier of Sabotage Res, which can be a nice option on teams where maximizing magical damage is of the highest priority.

A more in-depth analysis of Yune can be found in the Should You Pull article for her original Mythic banner, located here.

Spring Veronica is a strong green mage flier who boasts high values in Attack and Speed as well as exceptional mobility to boot, allowing her to present a notable offensive threat. Although somewhat unwieldy to utilize given its direct anti-synergy with conventional strategies, her exclusive weapon, Veðrfölnir's Egg, certainly makes for an interesting asset at her disposal and distinguishes her from her direct comparables through greater self-sufficiency. She also has the option of equipping a Gronnblade tome to exploit her access to class exclusive buffs and heighten her damage potential massively. In addition, Spring Veronica comes with the elusive G Duel Flying skill for those who wish to maximize their Arena scoring potential.

A more in-depth analysis of Spring Veronica can be found in the Should You Pull article for the Regal Rabbits banner, located here.

Legendary Eirika is a Water Legendary hero who is defined by the combined power of her two exclusive skills, Storm Sieglinde and Lunar Brace, both of which pair wonderfully to offer the young princess devastating damage potential via her Special activations. Her strong offensive statline of 31/39 and extended mobility further solidify her combat prowess, making her one of the best choices for an offensive cavalier. She also comes packed with the highly sought-after Atk/Spd Solo skill, a useful choice of A slot skill for many Player Phase oriented units.

A more in-depth analysis of Legendary Eirika can be found in the Should You Pull article for her original Legendary banner, located here.

While he certainly has no shortage of firepower with his offensive statline of 36/34 and extended mobility, Legendary Eliwood’s main selling point lies in the virtually unparalleled buffing capabilities of his unique personal weapon, Ardent Durandal, which applies the Bonus Doubler skill effect on the ally with the highest Attack. Combined with Vision of Arcadia, he can easily maximize an ally’s overall potential without even needing to maintain close proximity, unlike most other buffers; this lends itself exceedingly well to “superunit” strategies in Aether Raids, but can be put to good use pretty much anywhere. He makes for excellent Skill Inheritance fodder as well with his native Death Blow 4 and Rally Spd/Res+.

Completing the trio of Legendary sword cavaliers to be featured in this banner, Hríd shines as one of the most versatile cavalry units currently available -- a strength most aptly attributed to the astounding potential of his exclusive weapon, Gjöll. Through its ability to negate enemy follow-up attacks and guarantee his own under the proper circumstances, this weapon enables Hríd to make the greatest use of his min-maxed statline and excel at both dealing and tanking damage. His PRF B slot skill, Freezing Seal, is another key component of his kit as it allows him to activate his weapon by himself and provide valuable debuffing support concurrently, adding on to his overall value. Moreover, Hríd’s access to Distant Counter in his base kit makes him both cheap to build and great fodder for Summoners everywhere.

A more in-depth analysis of Hríd can be found in the Should You Pull article for his original Legendary banner, located here.

The sole Legendary hero to reside in the blue pool for this banner is Legendary Ephraim, a fantastic Player Phase oriented unit with some of the highest damage potential amongst all lance cavaliers. His unique personal weapon, Flame Siegmund, synergizes wonderfully with an offensive role and allows him to bypass his low Speed by guaranteeing his follow-up attack when the number of foes within two spaces exceeds that of his allies; combined with his exceptional base Attack and resilience to physical punishment, he can quickly decimate opposing foes without a second thought when utilized properly. Legendary Ephraim’s exclusive B slot skill, Solar Brace, further distinguishes the young lord grants him a surprising amount of sustainability through additional healing on top of his Special activations, though this can easily be swapped out for alternatives like Lull Atk/Def depending on what one needs of him.

Valentine’s Soren is a blue tome cavalier with an inclination towards offensive play, sporting a formidable offensive staline of 35/33, access to class-exclusive buffs, and an effective five-tile range. This allows him to utilize a Blárblade tome to great effect and consistently deal substantial amounts of damage when properly support, though his native Blárblooms remain a solid choice of weapon in a pinch. While his Skill Inheritance options are somewhat niche in nature, his status as one of the only carriers of Rally Atk/Spd+ does merit an honorable mention, particularly for those aiming to maximize the scoring potential of their units in Colosseum modes like Arena.

A more in-depth analysis of Valentine’s Soren can be found in the Should You Pull article for the Greil’s Beloved banner, located here.

Essentially an improved version of Effie, Kjelle stands tall as a relatively strong combatant who can leverage her well optimized statline beautifully thanks to her access to the omnipotent Fighter skills; depending on the resources one has available, she can be built to fulfill a variety of different roles. However, due to her lack of any exclusive skills, investing heavily in the young fighter may prove a rather redundant endeavor if one already has access to some of her more powerful contemporaries like Brave Hector and Winter Ephraim, though her excellent base statline does distinguish her nonetheless. Kjelle’s fodder is mostly unimpressive, with the one exception being Bold Fighter which shines as one of the best Player Phase skills in the game.

Eir’s status as the only Light Mythical Hero currently available grants her immense value for those aiming to maximize their scoring potential in Aether Raids Offense and can increase one’s Lift substantially during her respective season. She also stands out due to the special stat boosts she can apply on allies equipped with a Light Blessing (+5 HP and +5 Resistance) -- one of the, if not the strongest available given the prevalence of magical damage in Aether Raids. As a unit herself, Eir’s unique skills, Lyfjaberg and Sparkling Boost, offer her a stellar mix of offensive and supportive utility, and make a flexible ally who can maintain a meaningful impact at all times. Her base kit is incredibly synergistic (and effective) as well, including noteworthy skills such as Swift Sparrow and Mystic Boost; this makes her budget friendly and a potentially strong choice of fodder for those who already have two copies of her.

A more in-depth analysis of Eir can be found in the Should You Pull article for her original Legendary banner, located here.

Fallen Corrin is an infantry colorless dragon who enjoys the benefits of an outstanding overall statline and a lack of disadvantaged matchups (with the rare exception of units capable of wielding a Raven effect). When taken into consideration alongside her access to numerous infantry exclusive skills and the sheer power of her personal weapon, Savage Breath, Fallen Corrin is undoubtedly one of the most versatile and self-sufficient units around who can excel in either phase, having very few blatant weaknesses to speak of. In terms of fodder, Atk/Spd Solo and Sudden Panic are two fabulous skills in her arsenal that can be taken advantage of by a wide number of units; having them available in her base kit also makes building her a relatively easy task like most other units on this banner.

Although she may struggle to stand out in comparison to other healers like Brave Veronica and Bridal Fjorm, Picnic Genny can prove to be a useful asset at one’s disposal by merit of her status as a mounted healer, allowing her to perform admirably offensively with the Wrathful + Dazzling Staff combination and provide invaluable healing support to allies from long distances. Her high Attack and Resistance are her statline’s most notable traits and serve to heighten her supportive capabilities even further. Picnic Genny is a particularly strong candidate of Skill Inheritance for other healers, featuring Toasty Skewer, Fireflood Balm+, and Wrathful Staff.