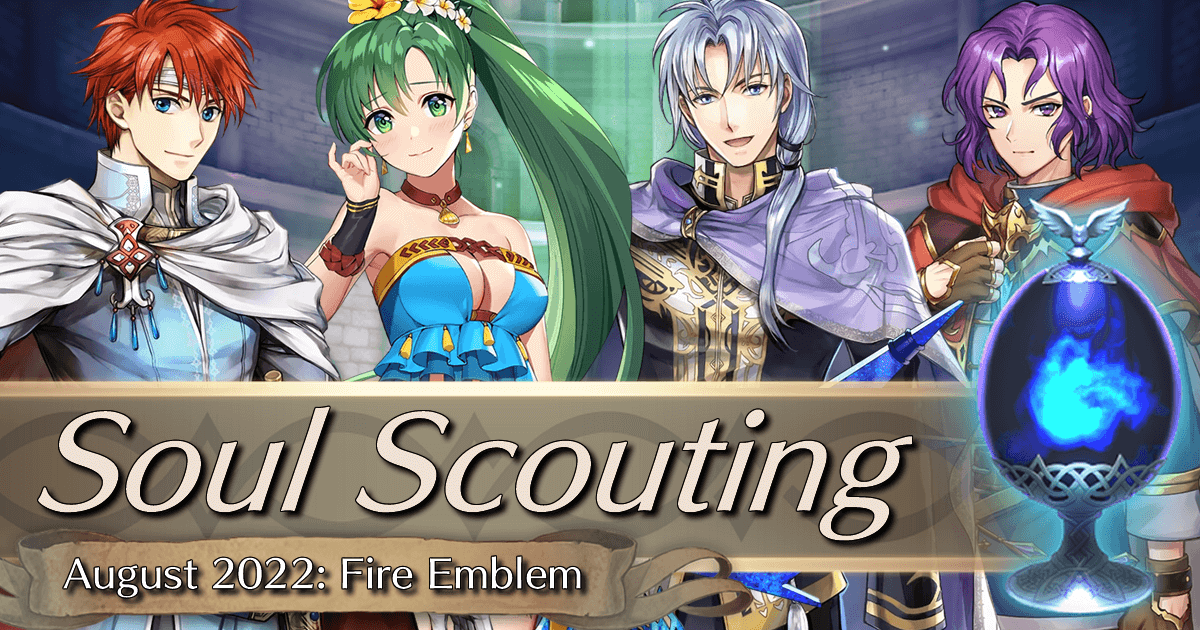 This iteration of Hall of Forms primarily features a decent variety of unit types: A Lance Cavalier, a Blue Bow Flier, and an Infantry Green and Red Tome: Brave Eliwood, Summer Lyn, Pent, and Erk respectively.

Brave Eliwood and Pent are normal 5*-locked heroes, although Brave Eliwood is somewhat easier to acquire in weekly rerun banners. Summer Lyn is significantly rarer as a 5* seasonal, while Erk is easily obtainable as a 3-4* unit, although merging 3-4*’s in the modern era is somewhat more difficult due to pool bloat. In this article, we’ll go over the optimal skills to inherit on each of these units: It’s important to make every Forma Soul use count due to their rarity. Brave Eliwood and Pent are the best units here: Brave Eliwood is among the best of his class type, while Pent is an incredible player phase mage who gives great support to AR Defense team compositions with a focus on mages.

Though optimal C Passive skills exist on a case-to-case basis, Joint Drives are essentially the most universal there is as they boost the stats of the unit as well as surrounding allies. Go for these (especially Joint Drive Atk) if available and there aren't better C slot options for your unit in particular. Likewise, Time's Pulse has fantastic overall value on infantry units due to the importance of frequent Special triggers in combat. 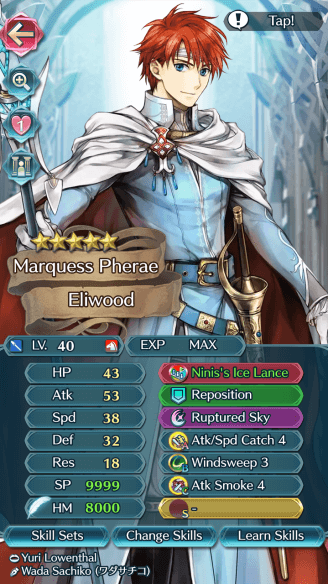 Brave Eliwood is an excellent 5* Lance Cavalier thanks to his exclusive weapon, which grants him a hefty bonus to his stats and neutralizes effects that prevent his follow-ups during combat, in addition to giving him a Speed based damage reduction effect. Besides Swift Sparrow 3 however, Brave Eliwood’s base kit is somewhat dry, making Hall of Forms a good opportunity to obtain his most useful skills.

Brave Eliwood’s choice of weapon is irrelevant, but since he’ll have his exclusive weapon automatically, it’s advisable to pick a 5*-locked and/or seasonal lance such as the Ninja Yari+. However, Eliwood’s weapon refine can be taken in order to save on Divine Dew which is a fairly limited resource for most players. For A slot skills, Surge Sparrow is an extremely desirable upgrade to Swift Sparrow 3, although Sturdy Surge, Atk/Spd Catch 4, and Atk/Spd Push 4 are also decent. Near Traces are easily Eliwood’s most desirable B slot options, and if one is obtainable, be sure to snag it if possible: Windsweep is also a solid option given the synergy it has with Eliwood’s weapon. There’s less to mention about his C slot: your usual Joint Drive Atk, Atk Smoke 4 / Spd Smoke 4, and Atk/Spd Menace are all good options for it. 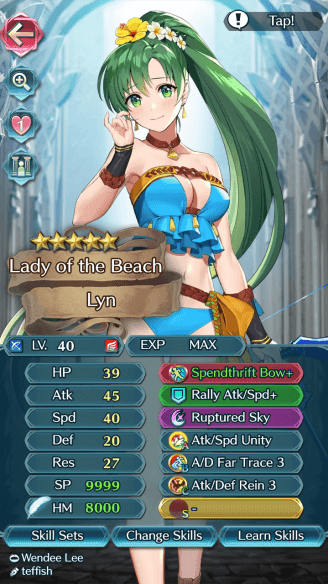 Summer Lyn is a Blue Bow Flier with an okay statline and exclusive weapon, but due to her class type and shaky Atk, she needs some investment to truly excel. Lyn’s exclusive weapon is fairly ho-hum for modern standards as well, only featuring armor effectiveness and a +4 boost to her stats. Considering it has to compete with excellent inheritable bows such as the Whitecap Bow+, one may choose to forego Summer Lyn’s exclusive weapon entirely and not be worse off for it.

Summer Lyn’s innate Sturdy Impact is decent, however she’ll want a Spd-boosting A slot skill as one of her forma skills, such as Swift Sparrow 3 or Atk/Spd Catch 4. She’ll also want S/D or A/D Far Trace as those are her best (and basically only) B slot options besides the more commonplace Chill skills and Desperation, although Windsweep can pair well with the likes of Whitecap Bow+ and has somewhat restricted accessibility at the time of writing. The C Slot skill taken is largely preference over which difficult to obtain C slot skill suits your playstyle best, and what ends up available in the end. 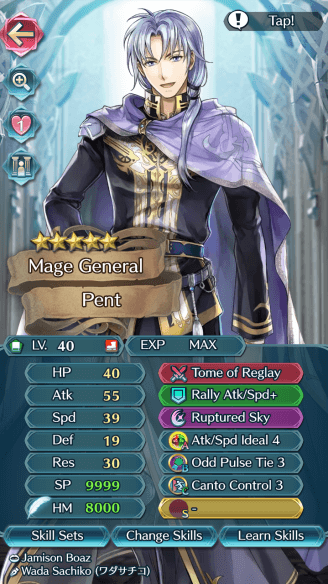 Pent is an Infantry Green Tome unit who possesses great support capabilities mixed with excellent combat, thanks to his great statline and exclusive weapon, which lets him grant -1 Special cooldown to himself and mage allies within 2 spaces as long as their Special cooldown count is at its maximum.

As Pent starts with his exclusive weapon already, the next best options are the usual candidates for the best inheritable Tomes that happen to be rare: Plegian Torch+ / Gronnvulture+, Snow Globe+, and Amity Blooms+ to a lesser extent. For his B slot, Null Follow-Up is a good pick as well as Lull Spd/Res: Although one of Pent’s best B slot options is the commonplace Desperation, so this is less of a concern. The best Atk/Spd Boosting A slot for Pent to pick up as a forma would be Atk/Spd Ideal 4 as it’s easily the rarest of the bunch: Atk/Spd Unity coming in second. The last point to note is Pent’s C slot: Canto Control is an incredible skill but is also extremely rare at the time of writing as it’s only available via the Mythic Hero Medeus, so it’s very much worth picking if it shows up. 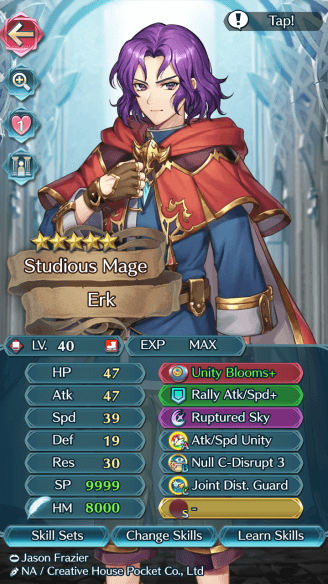 Erk is a fairly ordinary Red mage with no standout features. He has a decent offensive statline, but this isn’t really anything other mages can’t replicate on top of packing their own unique utility with exclusive weaponry. Still, Erk can perform given enough investment.

Unity Blooms+, Luminous Grace+, and Bridal Orchid+ are decent weapon choices and are also quite rare, but most of the other red tomes are either unimpressive options or are fairly commonplace. As such, these three options are the ones to shoot for above the others (although the Tomato Tome is a funny option if you want to turn your Erk into a second-rate support unit). Player Phase-based A slot skills such as Atk/Spd Ideal 4 and Atk/Spd Unity are excellent picks due to their rarity and power. His B slot depends on the way one wishes to run him, but Null Follow-Up, Null C-Disrupt, Lull Spd/Res, and Special Spiral are all good options. Canto Control is an amazing skill to obtain as a Forma as well if possible due to its rarity and utility and Time’s Pulse can pair well with setting up aera-of-effect Specials.