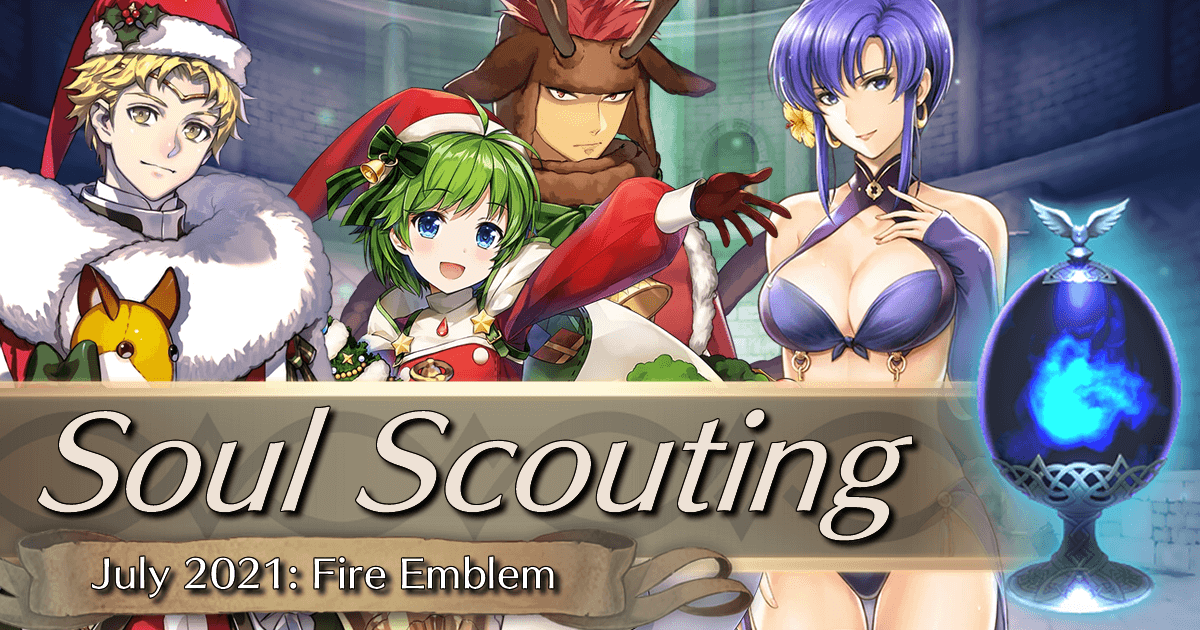 For this iteration of Hall of Forms, we have an all-seasonal cast from the Blazing Blade; three armors (sword, green dagger, blue tome), and one colorless dagger cavalier. Players have the chance to build up and possibly add the following units to their roster permanently by spending a Forma Soul:

Because the Save Skills (such as A/R Far Save or A/D Near Save) currently dominate our meta and have been very difficult to come by, many Summoners are looking to the Hall of Forms to obtain these rare skills in order to keep up. With this HoF having three separate armored units to choose from, there are many considerations at play here.

Beyond skill inheritance, many save units also require significant investment since they are generally frontline tanks. Merges and dragonflowers help Save units quite a bit, and so a unit who you get for free and can purchase with Grails might be more beneficial for a F2P player than a unit who is hard capped at +0 or even +1.

Unfortunately, having a powerful prf weapon also tilts things in Save Unit's favor. Without one, there's simply no way to fit in all the combat requirements we like in order to keep units alive: nullifying enemy follow-ups, ensuring your own follow-ups, debuffing enemy Attack, damage reduction... you name it. Since none of the three armored units in this HoF have prf weapons, you'll have to settle for inheritable weapons paired with armor B slots in order to keep them alive.

The second consideration should be if you want to prioritize Near Save or Far Save. While both melee and ranged units can equip either, it's generally better to try and keep your unit's A slot for a significant combat buff such as Distant Def 4 or Mirror Stance 3. Therefore, you should generally try to keep Near Save on a melee unit (Winter Zephiel in this case) and Far Save on a ranged unit (Winter Jaffar or Winter Nino).

Another thing to consider when looking at ranged units is that Armors cannot inherit Null C-Disrupt. This means that any armor with Far Save automatically is put at a disadvantage vs powerful staff units like Young L'arachel. The best way to counter this is by using a Near-Save armor with a ranged mage buddy who knows Null-C Disrupt.

This is where things get tricky. There are a dozen 'meta' units in Aether Raids Defense and picking the right unit to counter them all is virtually impossible. With Save units, you can selectively choose melee or ranged engagements, but even then there are quite a few threats for each.

Let's take Winter Zephiel, for example. While he may be able to hold his own against the omnipresent Legendary Sigurd and will destroy Hel with the right kit, he still has a debilitating color weakness vs. Seiros and Nott, two legendary defensive units who are present in most meta setups. For this reason, it's difficult to truly recommend him, since he's hard-countered by such present meta threats.

Next up we have Winter Nino, who puts most of her stats into Speed, but has difficulty denying opponent followups without turn-based skills such as Odd Follow-Up.  Without significant investment into her Speed via merges, she'll have a difficult time against fast units such as Winter Bernadetta and without follow-up denial, she crumbles in the face of auto-followup users such as Bramimond or Duo Lif. On top of this, her lackluster Defense stat of 22 makes her a sitting duck for popular bow users such as Python or Rath, both of whom are green and are staples on many Defense teams.

Finally, there is Winter Jaffar. Weakness to Duo Lif and Lysithea is already a major strike against him, though he has the benefit of being able to be merged in the grail shop and his stats are slightly more balanced. Like Nino however, he struggles against opponents who guarantee follow-ups and has to rely on his bulk to cut incoming damage.

Each unit has their pros and cons and unlike some units, none of these three can really be a one-size-fits-all when it comes to Aether Raids Offense Support. However, each of them can shine in their specific niche. For most players, Winter Jaffar might be the best option of the three, simply due to his balanced stats, merge availability, and decent color (as long as you're going up against a map that doesn't have some of the meta red tome users). For players looking for a specialized counter to certain units, or a Near Save user, then other armors can be considered. 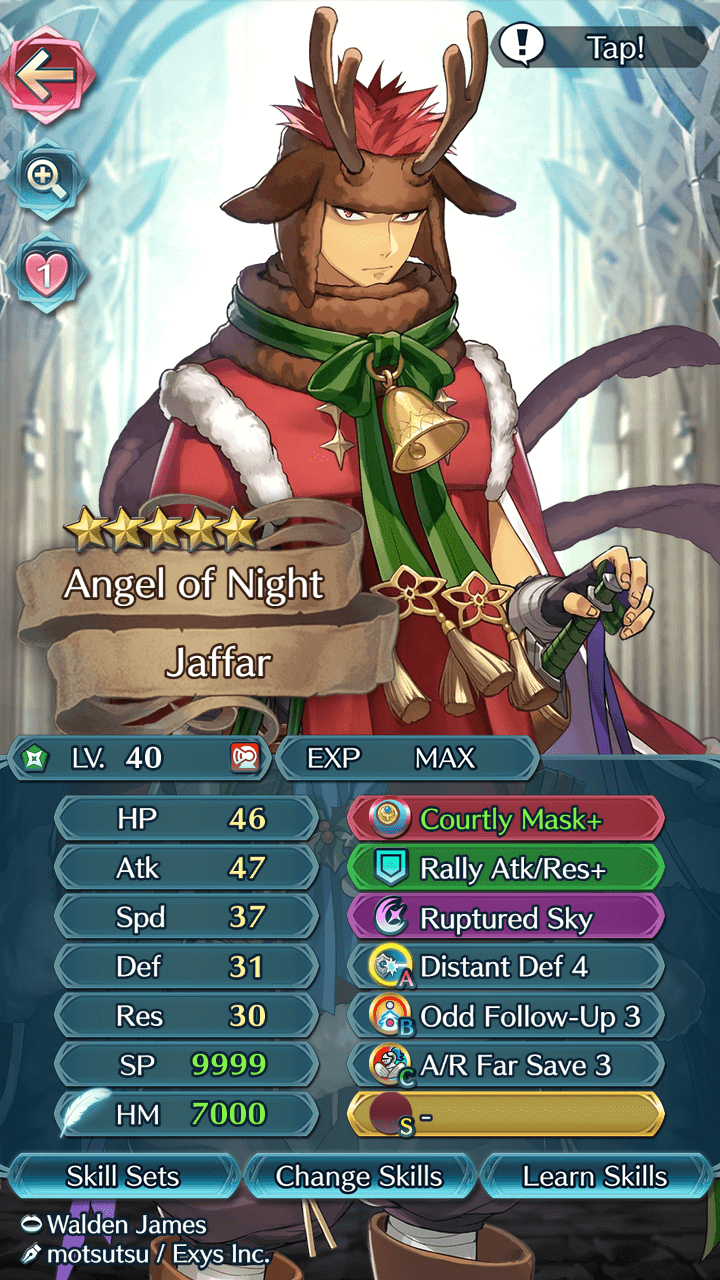 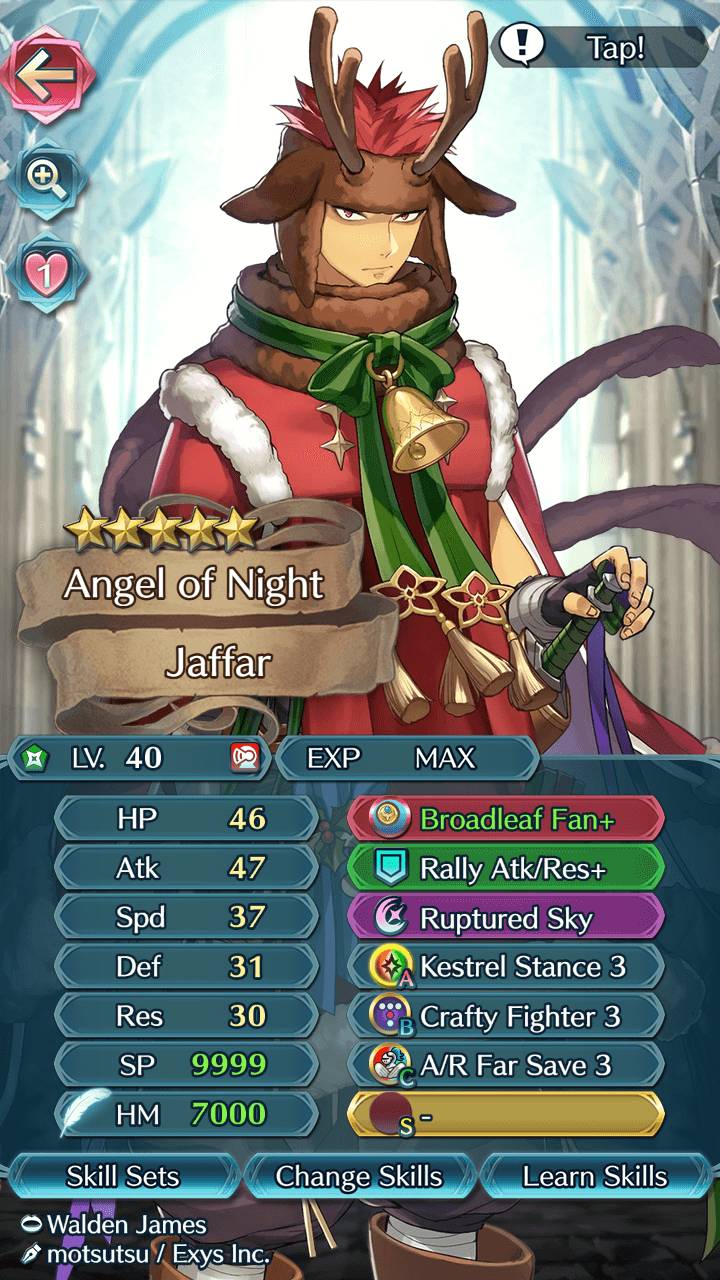 Jaffar has always been a decent merge project and his appearance in Hall of Forms makes him even more of an attractive option. With generally balanced stats in all regards, it's easy to make him very good simply by stacking his stats as high as they can possibly go through merges, trait fruit, and dragonflowers.

He lends himself fairly easily to a Far Save build, where he can protect your team against most units, though he'll still get torn to shreds by powerful foes such as Lysithea or Duo Lif. Still, he's a good option and can pull his weight when they're not around.

C-Passive: A/R Far Save, A/D Near Save

Winter Jaffar can be your specialized range tank with a Far Save skill, though he can also work with a Near Save skill as well, as long as he inherits Close Foil or Close Counter. It's probably better to shoot for Far Save though, so you can pick up Distant Def or Atk/Res Unity in his A slot.

Jaffar will still have issues countering units with auto-followups. Sadly, the only way to avoid this is to hamper his own follow-ups with Wary Fighter, or be selective about the turn he is engaged on and using Odd or Even Follow-Up. If you use a weapon like Courtly Mask however, he can mitigate the damage from his opponent's second hit while retaining a more powerful B slot, such as Crafty Fighter to ensure his own follow-ups (through opponent follow-up denial, if he outspeeds them) while inflicting Guard on his enemy. 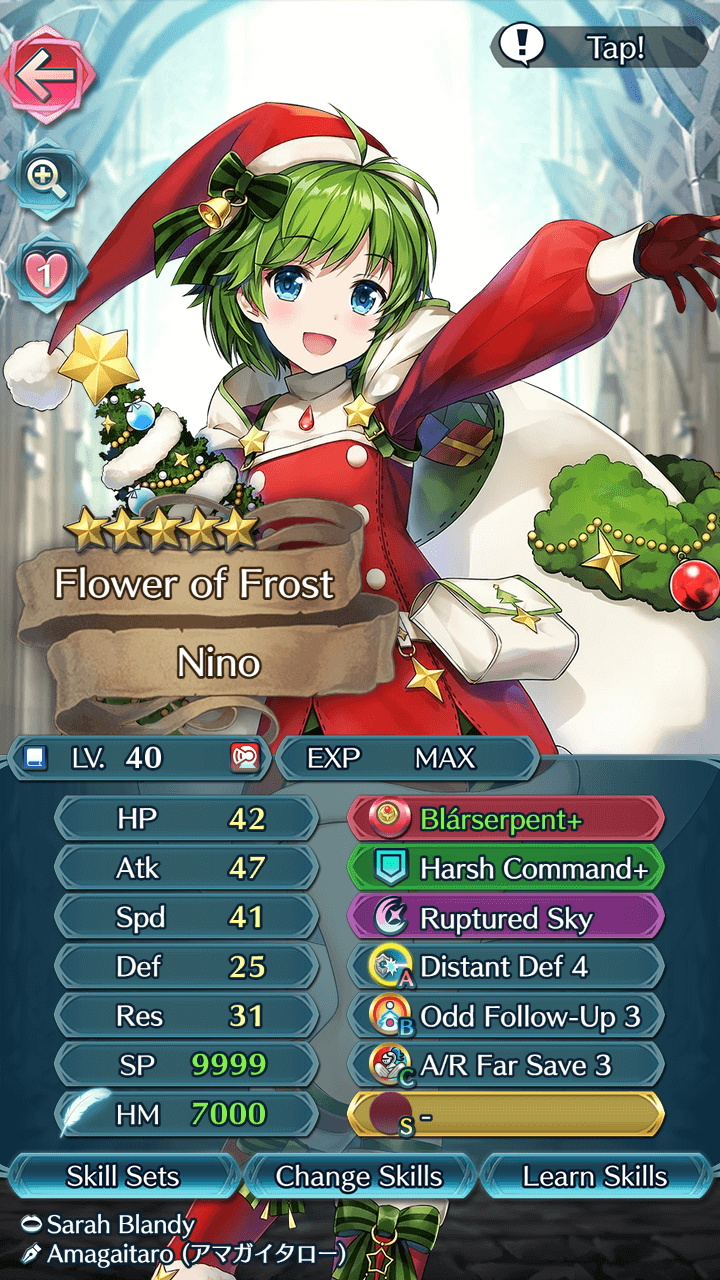 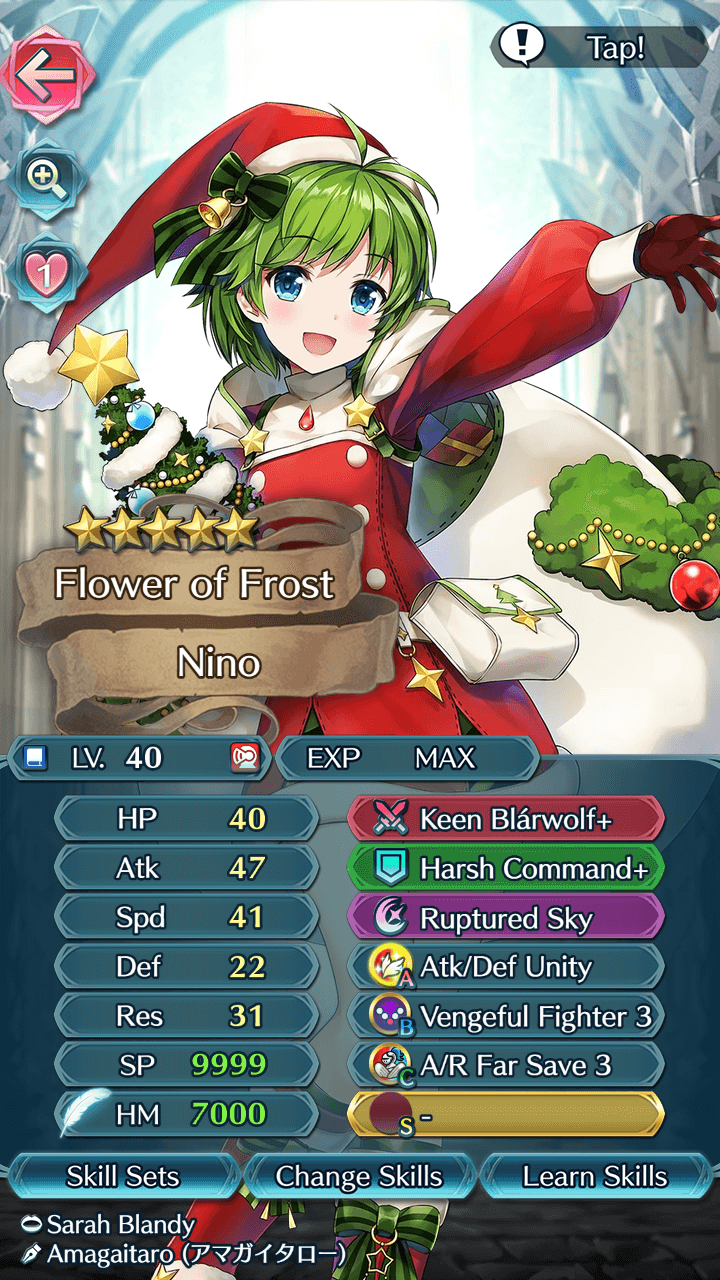 Nino is a high Speed mage with low Defense and average Resistance and Attack. unfortunately without the ability to inherit Null Follow-Up, her Speed is often wasted in high tier Aether Raids where just about every unit has follow-up guarantee or enemy follow-up denial. Still, Nino is a decent option, mainly for her weapon selection.

Unfortunately, her best skill loadout is going to look very similar to Jaffar, with maybe a few more Defense-based skills to offer her survivability against enemy archers.

Nino's best weapon choice will be Pact Blooms, which is essentially an upgraded version of her native Tannenbit+. This will offer her some sustain, as well as granting her extra bulk via in-combat Attack debuffs, and helping her to hit harder. Because Pact Blooms is available on a F2P unit however, you can shoot for some more exclusive tomes such as Blarserpent or Flora Guide. 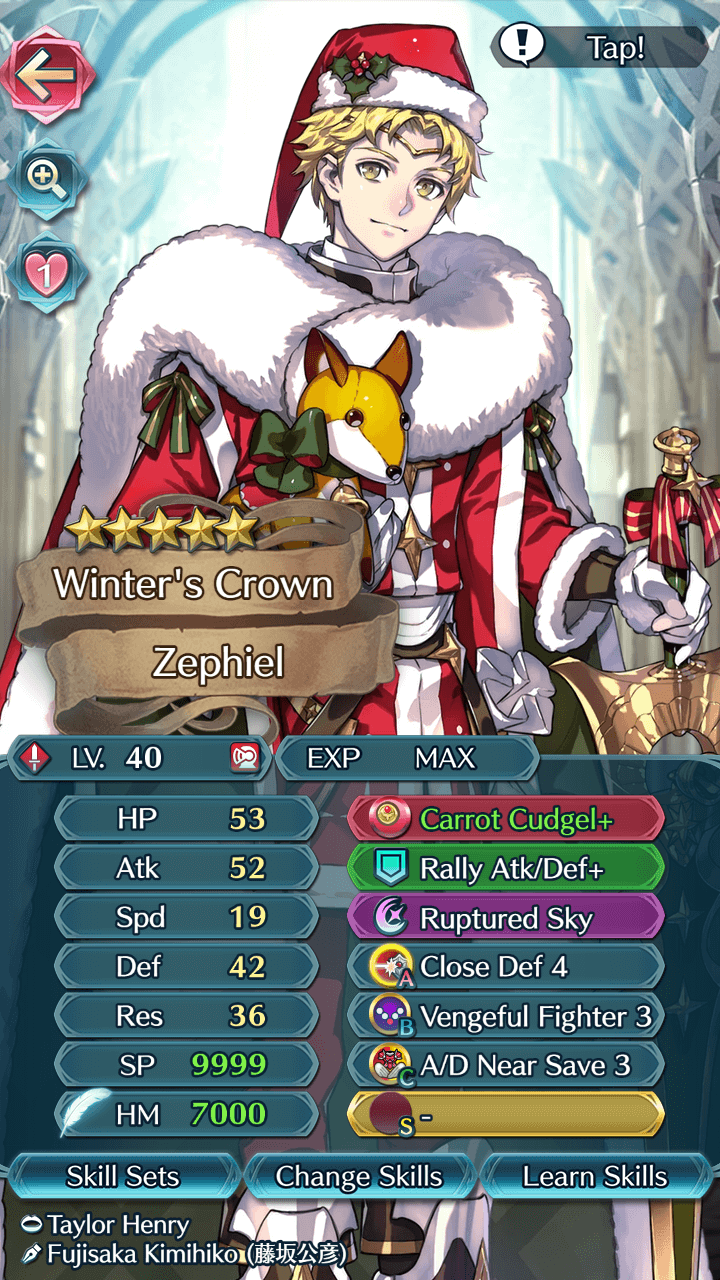 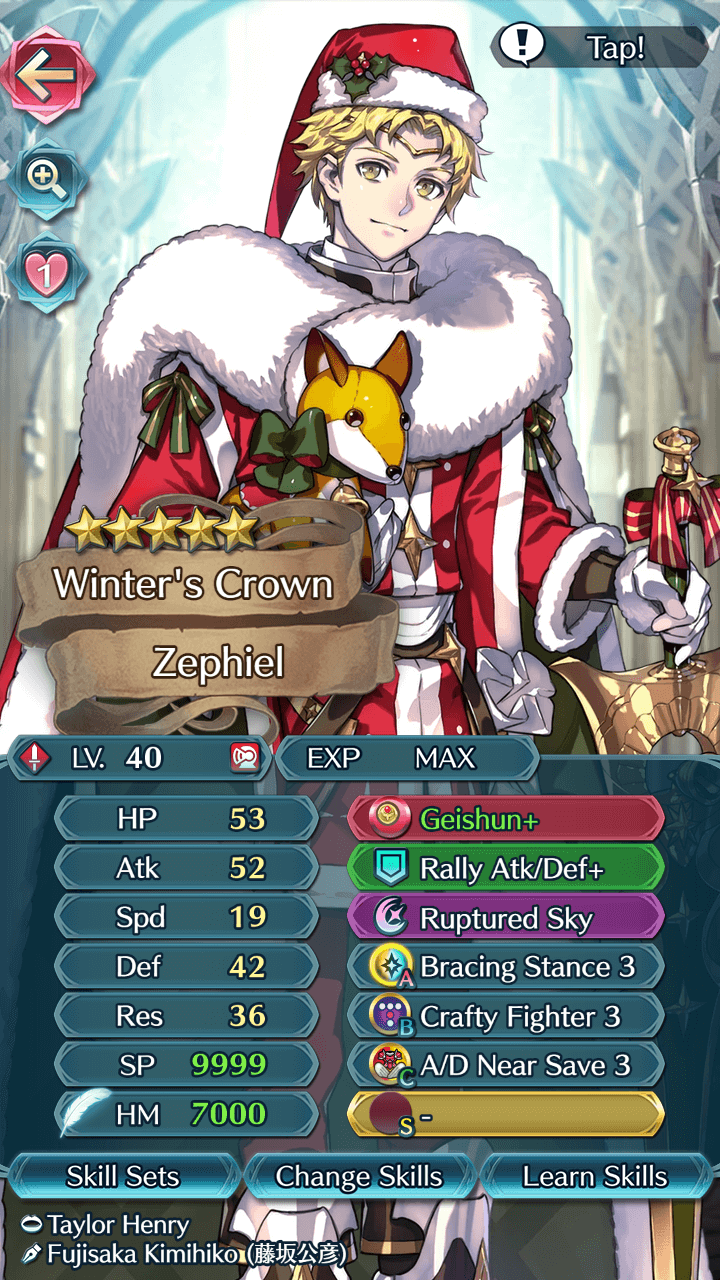 Winter Zephiel is an archetypal slow armored unit with high Defense and Resistance. This allows him to work as a a surprisingly good Near Save tank, provided he isn't hit by Seiros or Nott. Sadly, the two of them are Defense mythics, meaning that they are everywhere. Additionally, Winter Zephiel is hurt somewhat by the lack of good inheritable swords, since he does not have a prf weapon of his own.

C-Passive: A/D Near Save, A/R Near Save

Nothing really unique here - this is basically the same build as Winter Jaffar and Winter Nino, only slapped onto a melee unit. Winter Zephiel doesn't have many options for his weapon, and so the Carrot Cudgel may be his best choice, since he will more than likely be soaking the enemy Dark Shrine as well. Geishun is more of a team-support option which can also help him out, whereas his native Bellringer adds to his survivability. 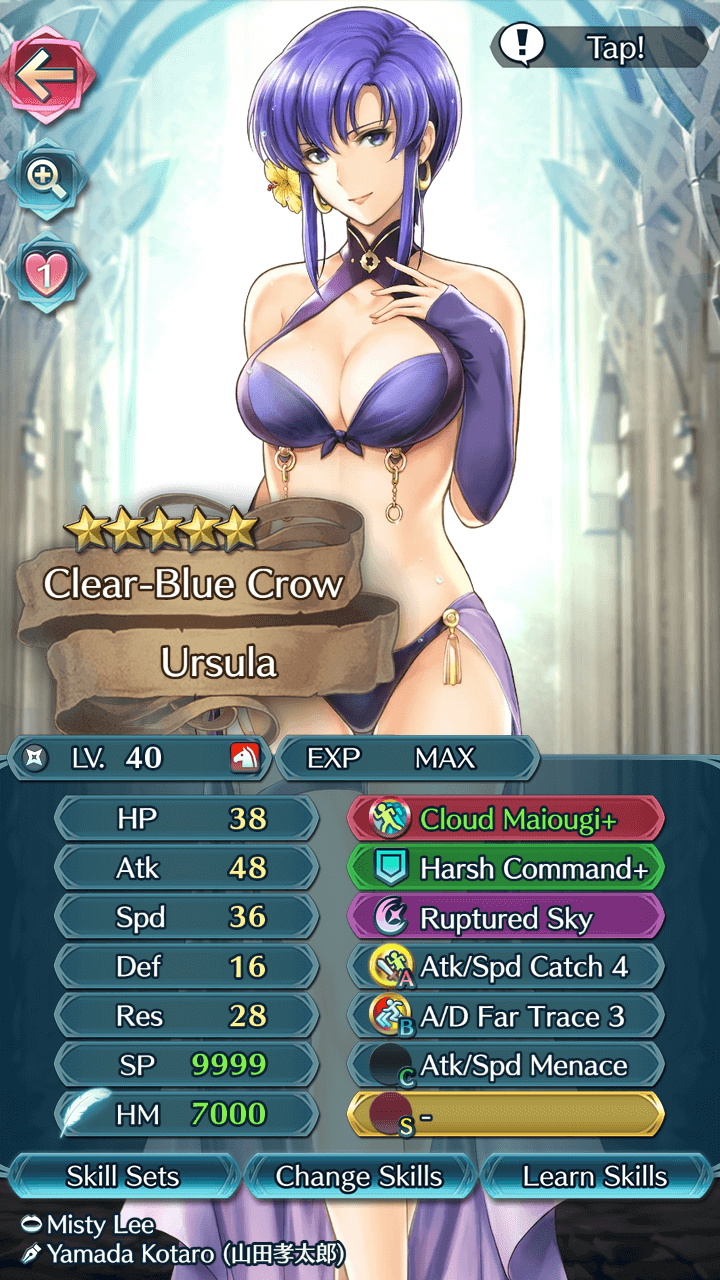 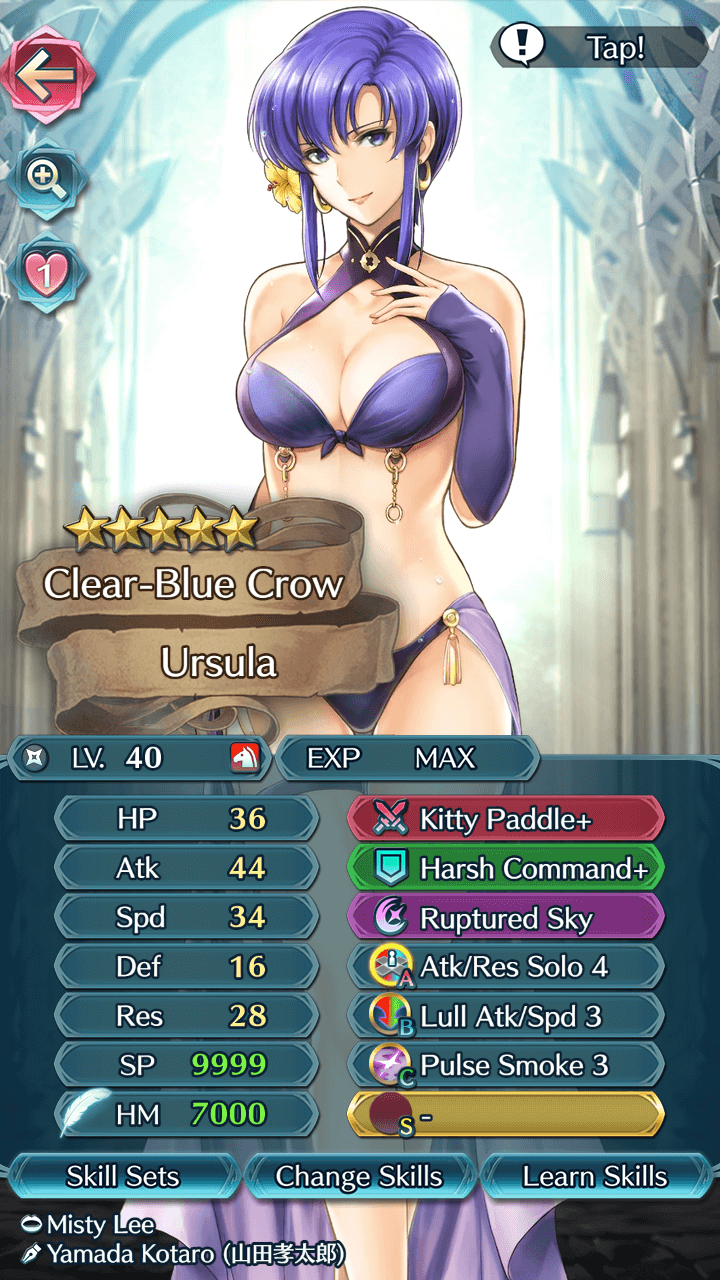 Breaking the mold by being neither a Winter unit or an armored unit is Summer Ursula, a colorless dagger cavalier with somewhat mediocre stats in all regards. Her Attack and Speed are alright, her Defense is poor, and her Resistance could be considered passable - however, she has incredible ranged, being a mounted unit, and provides colorless coverage with dagger inherits, which allows her to strike for effective damage vs any foe, as long as she's built for it.

Summer Ursula has access to some very powerful stat skill, such as Atk/Spd Catch and A/D Far Trace, both of which allow her to do more damage on the field. Far Trace additionally grants Summer Ursula an extra reposition using her movement at the end of combat.

Menace skills such as Atk/Def Menace are generally the best option for cavaliers unless you want to put her into your Aether Raids Defense, at which point Fatal Smoke becomes her best option. Her dagger can be customized to whatever unit you want her to counter, since daggers have the added benefit of having options that are effective toward all movement types or all magic users.