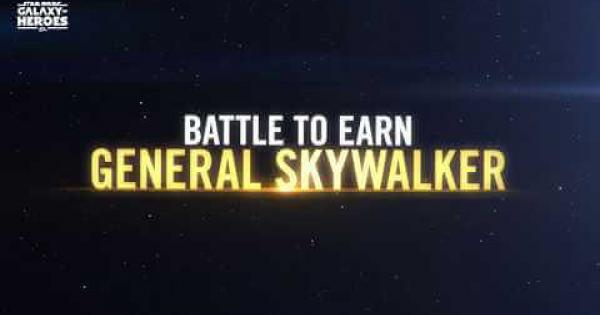 Hi Holotable Heroes, another guide by Tommy Race! CG just announced General Skywalker, and while it’s great news that you don’t have to put any work into Kit Fisto, General Skywalker has the most ambitious requirements of any toon ever released, and our guide will help you navigate the preparations leading up to the event!

The event will consist of four tiers, one of which will involve only event toons you do not need to farm, consisting of a Galactic Republic fleet battle, a Galactic Republic Battle, and a Separatists Battle as you relive the events of the Battle of Kamino. This event is the second Epic Confrontation to enter the game, the first being Darth Malak, and while the event has not yet been released, we can safely assume that it will be a very difficult event, and the requirements listed an minimums to attempt. I highly recommend not doing the minimum on every character. 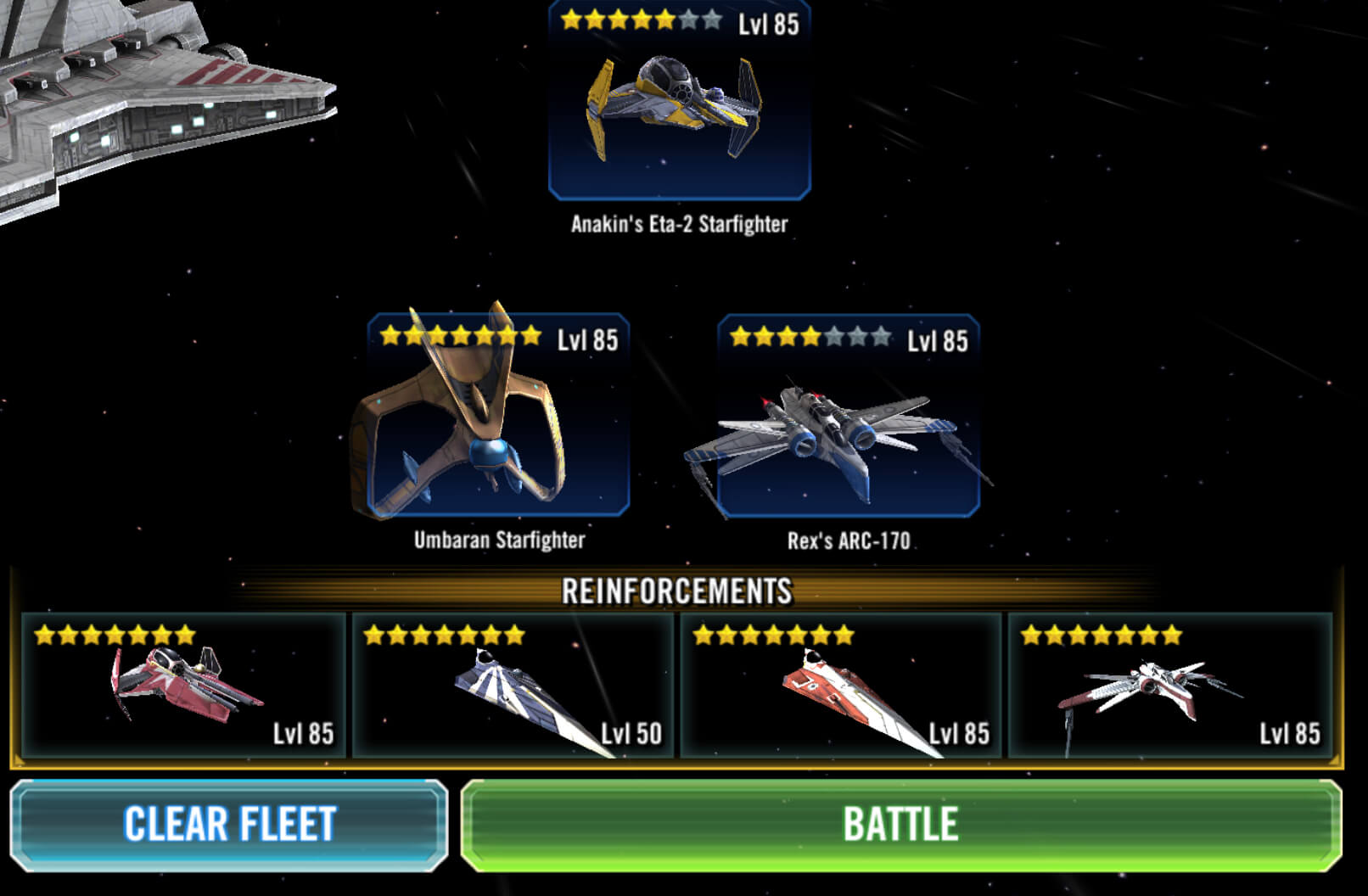 Anakin’s Starfighter is an absolute staple to a Galactic Republic Fleet, so this is definitely a grind you won’t feel bad about-- Throwing some relics on JKA to strengthen the ship won’t just help you with the event, it’ll help with your fleet arena as well.

There are two Galactic Republic Capital Ships: The Negotiator piloted by General Kenobi and the The Endurance piloted by Mace Windu, and while the Negotiator is impossible to 7* for any player by the time of the first event, it will no doubt be the better option. The difficulty of the event is as of yet unknown, but it isn’t much of an assumption that the battle will be quite difficult.

It may be tempting to skip out on Plo Koon or only half work him. Don’t do that. He is a key part of the team with fantastic TM gain on his basic feeding 40% TM when he uses his basic in addition to Health up and Protection a Recharge of 45% Do not sleep on your Plo Koon, he is absolutely a staple to Galactic Republic Fleets.

Post Event Release Edit: Most of this advice still holds. The battle is against an army of Vulture Droids, so you'll want to play hide the Anakin.  Mandalore MAW1 recommends running Plo in the front line instead of Rex to give Fives the taunt sooner and to feed Ani with TM ASAP.  This part of the event seems fairly easy, but you'll still want G12 min. on each pilot you run, and bring Ani to G13 with some Relics.  I also highly recommend checking out Mandalore MAW1's awesome video! 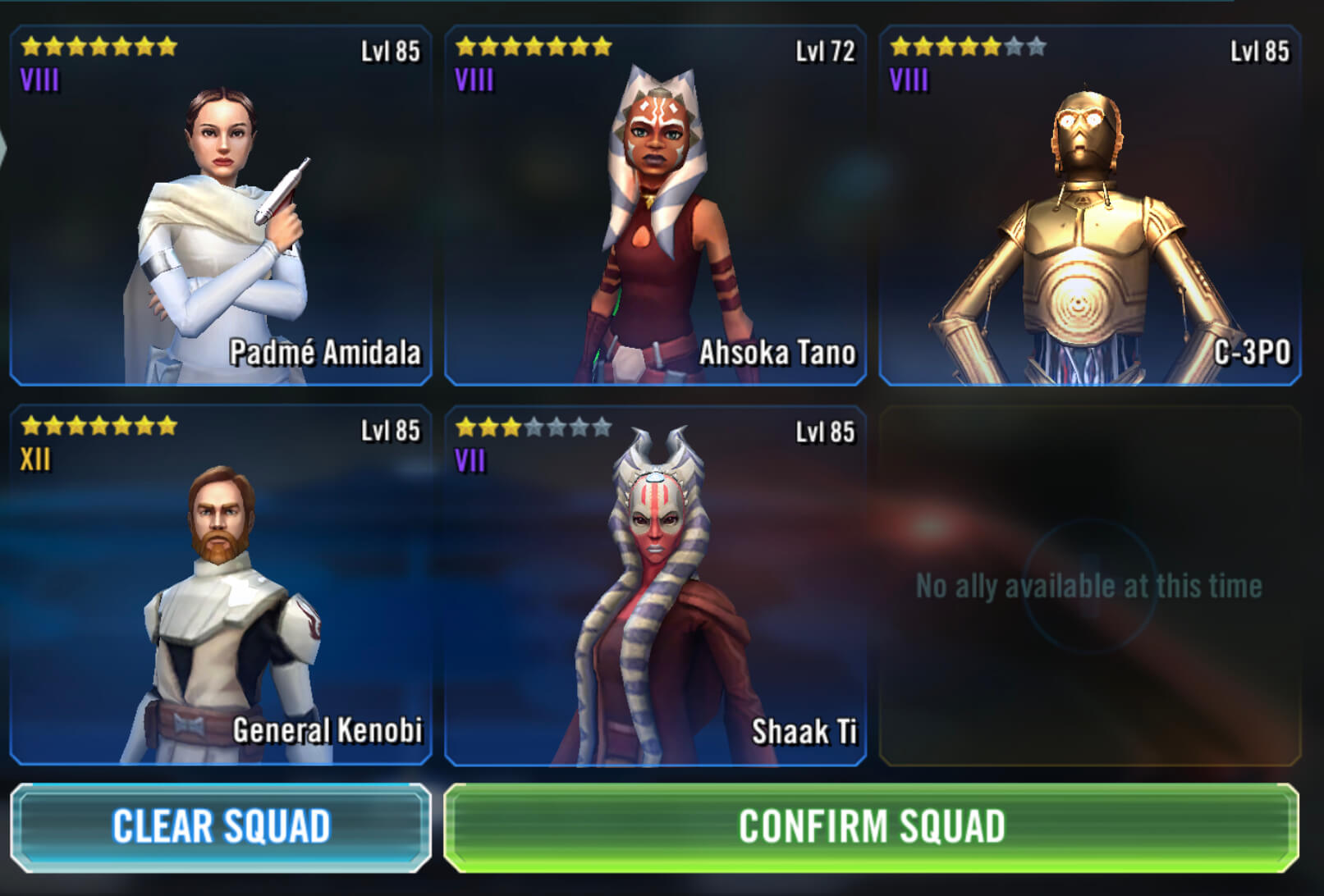 Padme Amidala will likely be the leader of choice if a choice is given for this battle as Shaak Ti’s lead is focused on a Clone Trooper team and GK’s lead is not quite as powerful as Padme’s. Given that the Darth Malak Event did not allow you to choose your leader, it will likely be GK since he fits the events of the story better as a leader, even if he may not be the player’s first choice. Overall, this team has some good synergy, but the lack of a strong Attacker is noticeable right away. It’s hard to tell at this time if one tier will be more difficult than all the rest, but I’m tentatively speculating that this will be easier than Tier 4. Notably this tier does require two legendaries so if you do not have C3PO or Padme Amidala at 7*, you’ll want to work an Ewok team for C3PO and a Sepratist team for Padme Amidala, Hey! Tier 4 looks like some good Separatists to farm for Padme!!!

Yay! Padme can be the leader, but this is still by no means an easy match, but it's also not the hardest.  T4 should be given the majority of your gear, relics, and zetas.  Although it has been done with all G12, I don't recommend it if you can help it!  General Kenobi and Ahsoka are pretty key to the team, and you should consider them first for G13 and relics.  I recommend the Kill Order: B2>Magnaguard>Droidekas x2>GG. Thank you Rangkor#9176 for supplying the kill order.

Check out this video for a full G12 Clear:

Tier 3: Will use all event Characters.

This tier will likely come down to a particular strategy that is not as of yet known since the event hasn’t launched yet. 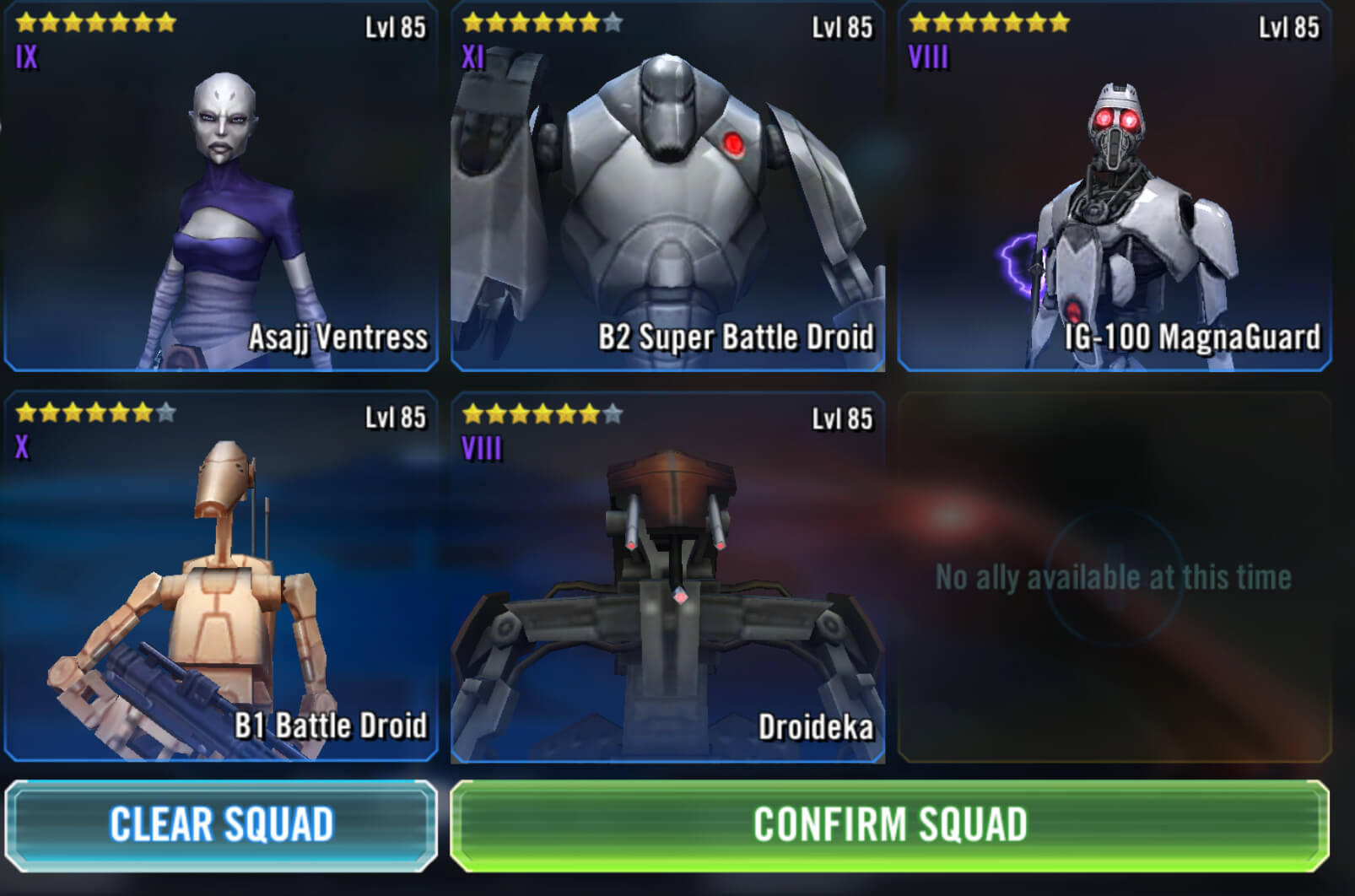 Asajj Ventress is the only leader character in this team, and her lead does not synergize with Separatists or Droids but instead boosts Nightsisters. This tier is likely to be the hardest given it is both last in line, and it involves team no one in their right mind would ever run anywhere. Similar to how Tier 2: Lightside was the most challenging and final tier in the Darth Malak Event, this final tier will likely destroy several phones. Although the difficulty is purely speculation, I think it would be a safe bet to zeta B1 and B2 for this tier, as their zetas bring the most bang for your buck to the team. While incredibly useful on a Nightsister team, Asajj’s zeta is not likely to have a significant impact on the event. Don’t zeta Droideka. Please. No matter how desperate you are, don’t do it.

Edit: After feedback form Kador Wuta, and looking into several videos featuring his zeta, I change my recommendation to highly recommend Droideka’s zeta. I would also add that Kador Wuta is a true credit to the community, and you should definitely check out his YouTube channel here: https://www.youtube.com/channel/UCz1MkEH4cMunuLhc6R-pRtw

It turns out this was absolutely the hardest tier afterall, and boy do I hate being right about that.  I recommend at least two G13 with relics, and B1 and Droideka should be considered first for G13.  B1 and Droideka's zetas are 100% recommended, and they may prevent you from destroying your phone.  Pretty much everything I learned about this Phase, I got from the Robot Wizard Discord Server.  The Robot Wizard continually comes up with some of the best counter meta teams and ingame strategies, and this was no exception. You can join the server here:

Be sure to check the pinned messages there for even more information.

You want to use as many basics as you can to avoid AOE damage triggering counterattacks while you whittle down General Skywalker's Protection. Once he's Toppled go for FIves>Echo>Rex>Arc. I highly recommend modding everyone for offense, and if necessary, survivability.  There has been some success modding purely for offense though. A special thank you to Dragoon#2164, ZapdosZaps#0384, and Kador Wuta.

That's all we've got for this guide holotable heroes!

If you're looking for more content, be sure to check out my week in review guide at the below link!