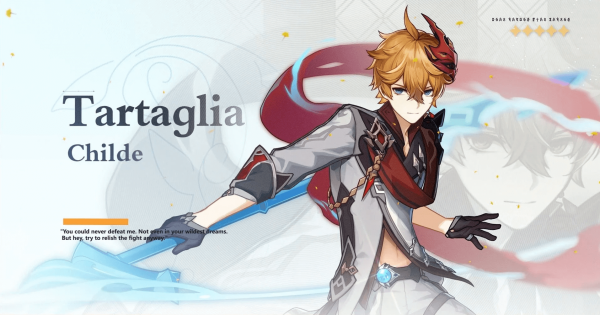 About a week ago I analyzed Childe’s Banner, providing a quick analysis for the new featured characters, with their toolkit info, potential Party Builds, and more. Today, I will expand on those topics, by analyzing Childe’s Abilities more in detail, providing a better-defined list of suggested Artifacts, Weapons, and Parties, using the Zhongli analysis’ format to organize all the info.

The pics in this article are mostly taken from Honey Hunter World, a very well organized Genshin Impact database.

If anybody who has seen Childe in action for longer than 10 seconds had to find a single word to describe him, it would probably be damage, as the 11th Fatui Harbinger is capable of making countless numbers appear on the screen in a matter of seconds. Something that also stands out is his ability to change weapons during combat, but his main one is a Bow.

Let’s start from the beginning, his Ascension stat is Hydro Damage, which is perfect for his playstyle as you’ll see later in the article. His Base ATK value at lv 90 is 305, which isn’t as impressive as Diluc’s 335 for example, but it’s still respectable for a DPS character.

Regarding Childe’s practicality, his base Combo is probably the least interesting part of his kit, but it’s worth a look nonetheless.

His Normal Attack Skill Damage is similar to Fischl’s, so it’s decent damage-wise, but his Charged Shot is definitely a more juicy aspect

The reason is the Riptide mark that applies on hit - for 18 seconds -, and the Riptide Flash that gets activated if he hits a marked opponent with the shot, which results in continuous strong Hydro Damage AoE hits. It’s also a strong way to generate Elemental Reactions.

In any case, the main part of Childe’s toolkit is his Elemental Skill, which allows him to use a Melee Stance for 30 seconds at most.

He can go back to Bow Stance at any time, and the Sill CD will be equal to 6 seconds + the duration of his Melee Stance for that specific usage. If he switches to a standby character, the Melee stance automatically ends. If he keeps the Melee stance for 30 seconds without disabling it beforehand, the CD will last 45 seconds. What this tells us is that Childe isn’t a typical DPS like Diluc or Klee, who can stay on the field at all times, since his CD would become problematic.

However, his Damage ceiling is as high as anybody else’s, if not the highest in the game since one of his Talents makes him apply Riptide on enemies he inflicts Critical hits on while in Melee stance.

Every time Childe hits a marked opponent while his Elemental Skill is active, Riptide Slash activates. The difference with Riptide Flash is that this effect inflicts a single strong AoE Hydro hit - but it has a 1.5 seconds CD -. Overall, if Childe manages to apply Riptide on multiple enemies while they’re grouped, the AoE Damage will be ridiculously high. It’s also worth noting that Riptide Slash scales off Elemental Skill Damage.

Generally, his Melee Burst is the one that’s worth using, especially if Childe has practical ways to group opponents and inflict Riptide to all of them beforehand. Still, his Bow Burst can be resourceful, because its Energy recharge effect allows Childe to regain enough energy to use another Burst as soon as its CD ends, in some cases.

Last but not least, unlike most characters’ third Talent, Childe’s is useful in combat

Not only this is nice for his own Damage, but it also reinforces the idea that Childe should be played alongside another DPS.

Is Childe a Whale Character?

It…depends on how you plan to use him. In short, Childe’s constellations do two things: increase his Damage and make his CD issue much less problematic.

In particular, his C6 is frustratingly - because only 0,1% of players can unlock it - strong, as it basically allows him to have 100% uptime in Melee stance.

His C1 also affects his CD, but to a lesser extent.

In fact, 20% is only significant if he stays in Melee stance for a long time, and even in that case it’s still not enough to make him a consistent carry DPS.

His C2 practically makes his Burst’s Energy requirement a non factor, which is good considering how strong its damage is.

All in all, all his Constellations are at least good, and his C6 is absolutely required if you want to use Childe as the only DPS on the Team. However, this doesn’t mean Childe is a trash can at C0, quite the contrary. In the following paragraphs I’ll address his potential without Constellations.

Whether you use Childe as the main DPS or the secondary DPS on your Party, he has to be used alongside another strong Damage dealer that can assault opponents while Childe is on standby due to his Elemental Skill CD. A great single target DPS is suggested since Childe is better at inflicting AoE Damage thanks to Riptide.

In general, using Childe’s Melee stance for longer than 12 seconds - which already sets his CD at 18 seconds - isn’t recommended.

Keep in mind that in some situations it’s also good to use some of Childe’s Charged Shots in Bow Stance to hit weak points and apply Riptide Flash.

Secondly, to magnify his Damage it’s good to use an Electro Support like Fischl since his Hydro hits are so frequent, Electro-charge basically turns opponents into potato fries.

However, remember that if you’re running two Damage dealers, you ideally want to support both of them well.

Unfortunately, a Hydro set hasn’t been released (yet), but Childe still has some decent options:

Regarding the main rolls, the Goblet must buff Hydro Damage, Crit Rate/Damage% on Circlet, ATK% on Sands. Regarding substats, it’s Crit Rate%>Crit DMG%>ATK%>Energy Recharge% like for most DPS. Crit Rate is more important on Childe than on other characters since it makes his Riptide easier to apply, so 50-60% is optimal.

Mirror, mirror on the wall, who is the strongest side-DPS of all?

What if I have C6 Childe?

Why are you even reading this and not just destroying any opponent in game with whatever Party composition?!?

To Wrap it Up

So, this is it. Have you been lucky enough to pull Childe? Have you experimented interesting Builds for him that this Guide hasn’t considered? Let us in the comments below!