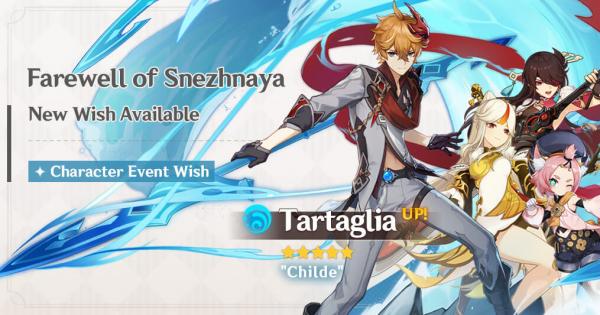 Hello Travelers! Finally, Update 1.1 is here, and among all the gameplay-based updates it brought a new banner as well: Farewell of Senzhaya, featuring Tartaglia “Childe” and Diona as the new characters.

This article will function as an early impression regarding the new characters’ potential, possible optimal Party compositions, and weapons choices.

The most stylish Fatui killer is here, with a flashy but intricate toolkit at his disposal, as he has two different Battle Stances: Ranged and Melee - this one is Childe's best source of Damage, but it's tied to his Elemental Skill -.

Riptide releases powerful AoE Hydro hits when Childe hits affected enemies with his water-based attacks - which are mostly related to his Melee stance -. If an opponent dies while he has a Riptide seal on him, the effect will also apply to any nearby enemy, making Childe great at self-sustaining his Damage output. Lastly, his Melee Elemental Burst is the apex of his toolkit Damage wise.

Overall, the orange-haired Fatui is a very potent Damage dealer, but he has a glaring issue.

In fact, unless his sixth Constellation is active - a nice joke, I know -, his Elemental Skill CD lasts too long to make him a consistent Main DPS like Keqing or Diluc in long fights such as Abyss and Domains, but this doesn’t mean he’s worse than them, rather than he needs to be used in specific Party compositions that relieve the impact of Childe’s only real weakness.

Electro Supports work great in tandem with Childe, as his AoE Hydro damage is perfect for Elemental Reactions. Fischl fits the role incredibly well thanks to her trustworthy ally Oz, but to call her just a Support would be an understatement. In fact, at high Constellation, Fischl can switch in and function as the main DPS during Tartaglia’s Elemental Skill downtime.

Diona’s capability to constantly apply Cryo comes in handy as well, as it makes her a reliable Superconduct Support for Fischl and a resourceful Freeze generator if used in tandem with Childe - while Shatter can’t really be activated on this Party, Freezing can still be useful to get out of tricky situations -. She’s also a great defensive option thanks to her Elemental Skill’s Shield and Elemental Burst’s Heal.

Both Venti and Sucrose are good at grouping opponents while decreasing their Elemental Resistance - which amplifies Damage well in a team like this- thanks to the Viridescent Venerer set they should always have on. They’re also good at generating Energy for the whole Party, which is especially useful for Diona as her Elemental Burst costs 80.

Overall, this is a very synergetic Team with high DPS potential and decent survivability.

If you lack Fischl C6, this is also a viable option.

The main tactic is always to use Childe in tandem with Oz to generate constant AoE Elemental Reactions, what differs compared to the previous lineup is Razor functioning as the Secondary DPS on the Team instead of Fischl.

Diona has the same role here, as Razor benefits a lot from Superconduct.

The only issue here is that the Energy generation is lower on this Team compared to the Build where an Anemo Support is in, - although the Electro resonance between Fischl and Razor generates useful Elemental Particles - but this is a great DPS Build nonetheless.

Xiangling would also be a valid alternative for Razor on this Team as a Physical DPS, but applying Superconduct on enemies is trickier with her - you’d need to do that with Diona and Fischl before attacking with Xiang -.

Bennett - replacing Diona or Venti/Sucrose - is also a good Damage support for Childe Teams, as his Elemental Burst also benefits the secondary DPS on the Team.

Mona - replacing Diona - can be used with Childe to amplify his Melee Burst, to keep inflicting Hydro on opponents when Tartaglia is in standby - which can be taken advantage of by a secondary DPS -.

Childe thrives with a weapon that provides Crit Rate%, so The Viridescent Verner, Royal Bow, Skyward Harp - best one, but it’s a premium choice since it’s 5* - are great options. Alternatively, weapons that can magnify his Damage output such as Rust and Blackcliff Bow also work well.

Artifacts sets are an interesting matter for Childe, as there is no Hydro set in the Game. For this reason, as of now the full Noblesse Oblige set looks like a solid option for him, seeing how Riptide scales off Burst Damage when released through Elemental Burst. The ATK% Buff the set provides also comes in handy, as you can also use his Ranged Elemental Burst to apply Riptide on everybody and get the Noblesse Oblige buff up->Activate the Melee stance to cause massive AoE Damage. Alternatively, you can also use Noblesse Oblige + Gladiator’s Finale if you prefer the ATK% Buff to be more consistent.

Diona has the responsibility to further prove that children are really strong in Genshin Impact, as Klee and Qiqi did before her.

Just like Qiqi, her Element is Cryo and she can heal the whole Party thanks to her Elemental Burst, but the similarities end there. In fact, while Qiqi is much more focused on healing, Diona is more of a Defensive Support thanks to the Shield she creates through her Elemental Skill, and also to how easy it is for her to apply Cryo Effects on opponents - her Skill has low CD duration and her Burst applies continuous Cryo Damage on opponents within its radius -.

For this reason, she works incredibly well with Pyro and Electro DPS thanks to how easy it is for her to create a basis for Melt and Superconduct reactions respectively.

Constellations magnify all of her capabilities: C1 makes it easier to frequently use her Burst - without it, the 80 Energy requirement to use it might be an issue -, C2 makes her Shield better, and C6 noticeably improves every Elemental Reaction that happens within her Burst’s radius.

Overall, Diona is a versatile character that fits well in many compositions, let’s see some

This Team’s concept is to magnify Diluc’s Damage as much as possible through Diona’s Cryo Support and Bennett’s Elemental Burst’s Buff, while Venti/Sucrose are both great for their capability to group enemies and to generate Energy for the whole Team.

While Elemental Bursts aren’t active, Diona can still apply Cryo on opponents through her low CD Elemental Skill, so Melt Elemental reactions are frequent on this Team.

Also, both Diona and Bennett are capable to heal, so survivability is high as well on this Build.

Diona also works well as a Support for Electro DPS such as Fischl and Razor.

More generally, her Defensive utility makes her a character you can throw in most lineups and he’ll do well.

She needs high Energy Recharge% to use her Elemental Burst frequently in battle, so weapons such as Sacrificial Bow and Favonius Bow are suggested.

Regarding her Artifacts, full set Maiden Beloved works well to magnify her heal, and full Noblesse Oblige can be used as well to magnify her Support capability through her Elemental Burst. In both cases, HP% rolls are important as that’s what her Shield and Heal scale off.

To Wrap Things Up

The banner also features Ningguang and Beidou, who are both good DPS - especially Ningguang as she’s a very strong single target Nuker -.

If you’re interested in Diona and Childe and you think they could fit specific Builds you already have a solid basis for - like the ones highlighted in this article -, Farewell of Senzhaya is a good banner for you.