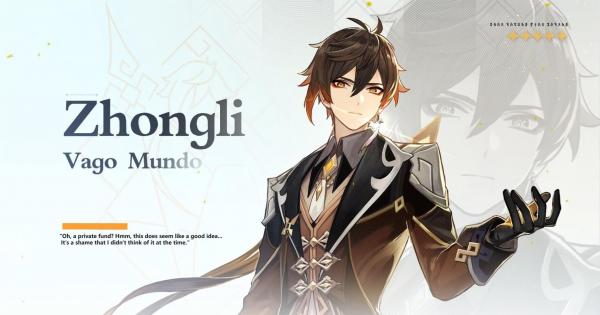 Hello Travelers, I hope you’re enjoying the 1.1 Update on Genshin Impact. Finally, Zhongli is here, many players have been saving Primogems for him as he's arguably the most anticipated character in the - short - history of this Game. Previously, Gamepress already talked abou this character thank  Honey Hunter World 's Datamines that turned out to be true on Zhongli's release. Testing the character made some things clearer, but for the most part this article will stay the same with a few tweaks, specifically in the Party Composition and Artifacts suggestions.

Just like his role in the lore implies, Zhongli is a Geo character. To attack, he uses a Polearm and his Normal Attack Chain has 6 hit DMG in total. 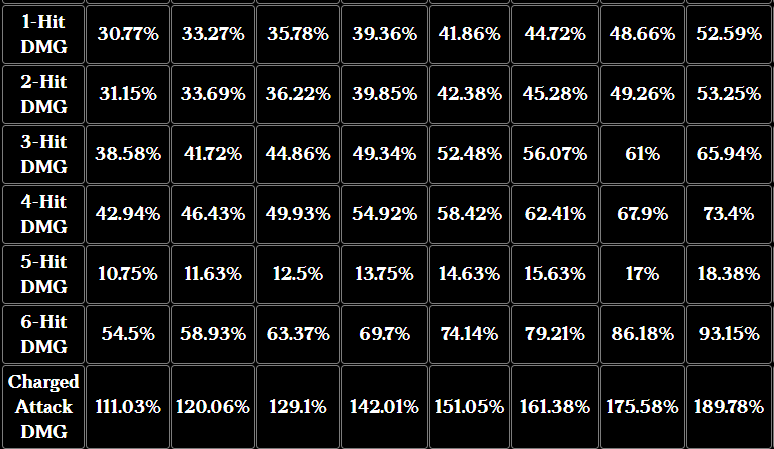 Zhongli’s 5th hit is nifty, as he kicks his polearm causing it to rotate in the air for about a second, which inflicts multiple hits to opponents in range - good for weapons that have Damage per hit effects, like Crescent Pike -. The unique part is that apparently, while the weapon rotates, Zhong Li can attack-cancel by dashing, but the attack won’t finish until the rotation ends or Zhong Li starts another Combo, which makes his NA chain quite practical as a whole.

Zhongli’s Ascension Stat is Geo Damage, which magnifies his main strengths greatly as we’ll see in the following paragraphs.

Regarding his Elemental Skill, it has different uses depending on whether you hold his Skill button or not.

The “press” effect creates a Geo pillar from the ground, that inflict Damage to opponents on hit and resonates with other Geo constructs - which means they replicate the pillar's effects -, dealing continuous Geo Damage. At C0, he can only create one at a time.

Very interesting effects can be generated if you combine Zhongli's pillar with Geo Traveler's constructs or even Ningguang's, although setting the whole thing up can be wonky at times. Zhongli's C1 makes this easier, as it makes him able to mantain 2 pillars on the floor simultaneously - although 2 pillars can't resonate with each other, just with other constructs -.

The “hold” effect causes AoE Damage, creates a shield that scales off Zhongli’s Max HP and absorbs Geo hits 250% more effectively - so it works like Diona’s -, and drains Geo Element from a maximum of two targets - example, it breaks Geo Shields -.

It’s worth noting that the Shield stays on your current character when you switch out, which is incredibly practical considering its 20 seconds duration, and Zhongli’s first talent.

This has great synergy with characters that have the Retracing Bolide set on them, but we’ll address this later.

Furthermore, Zhongli’s C6 - Yeah, I know - makes the shield an overpowered Supportive effect by making it a Healing Skill as well

This, combined with the Shield’s base Damage absorption its Talent-based fortifications, makes Zhongli’s Elemental Skill arguably the best Defensive tool in the game for people that are rich enough to pull the Geo Archon 7 times. What’s interesting is that its duration and CD allow him to use the Shield and still be able to summon Zhongli’s Geo structure(s) afterward before it ends.

Last but not least, his Elemental Burst casts an AoE meteor that deals significant AoE Damage, while also petrifying targets on hit.

This Burst’s Energy Requirements and CD are both really advantageous, which is amazing considering how much potential his petrification utility has.

His second Talent increases his Burst Damage depending on his Max HP, but this doesn't mean you should stack HP on Zhongli, as you'll see later.

Is Zhongli a Whale character?

Truth be told, the only Constellation that looks unreasonably strong is his C6, as it adds another layer to Zhongli’s Supportive capabilities, while the others are just improvements to what he can already do - while his C1 makes his pillars considerably more effective, they're not his main Damage source in any case -.

So no, while they make Zhongli even better, it doesn’t look like his Constellations are strictly required for him to be used in any particular role, except Healer.

Now that we’ve looked at how Zhongli works in general, let’s take a deeper look at what roles he could cover in battle - at C0, for the most part -.

Primarily, Zhongli is geared to be a great Support. Starting from his shield, it seems to have great durability and duration, which not only make it a great defensive tool but also make it synergize perfectly with the Retracing Bolide set, as stated earlier.

By putting this on your main DPS, you can use Zhongli’s shield and then switch to him for an enormous Damage increase. Plus, Zhongli’s Geo Type makes it easy for him to create Crystalize shields in the eventuality his main shield breaks, so Retracing Bolide is a reliable and strong Damage set if you use Zhongli as Support. A character that would benefit from this is Childe, since he doesn’t have a great DPS set at the moment - but it looks like Update 1.2 will fix this issue for him -.

Another key part of Zhongli’s Supportive toolkit is his Elemental Burst, which petrifies opponents for 4 seconds at Talent lv 10. Now, while the fact that Zhongli doesn't have access to mind-boggling damage multipliers such as Vaporize or Melt, if built well his Burst will consistently inflict high Damage, but don't expect him to outdamage characters that benefit from overpowered Elemental Reactions. The petrify effect isn't particularly incredible, but it's a nice tool to block opponents like Fatui before they use their shields.

So, what makes Zhongli good? What could he bring to your Abyss Team, for example? Truth be told, nothing he's able to do is particularly revolutionary, but he still has value as a Defensive Burst Support. His shield, in particular, is a consistently great defensive tool thanks to its low CD and relatively high Damage absorption capabilities - in realistic scenarios you should expect it to absorb 6000-8000 Damage -. This doesn't mean the Geo Archon allows you to rush through opponents like Rambo, but it's still a foolproof tool that'll allow you to Tank a few more hits even in high level Abyss. Its Skill's low CDs also allow Zhongli to cast his pillars before the shield disappears, which is important for Energy Recharge purposes.

Speaking about Energy Recharge, the pillars alone don't regenerate enough particles for him to recover 40 Energy in 12 seconds - his burst's CD -, so he needs to have some Energy Recharge% rolls on either his substats or main stats - Energy Recharge% weapon might be a bit overkill -. You need to manage particles well with him, his Burst is his main source as it's a powerful AoE nuke - opponents drop energy particles when they fall under certain HP thresholds or they're killed -, but he might have some issues when there aren't many opponents to face.

Regarding his Artifacts stats, it’s probably worth to build him as you’d build a DPS considering Geo isn’t really a strong Reaction based element, so: Geo Damage% Goblet, Crit Rate/DMG% Circlet, ATK%/Energy Recharge% Sands. Regarding Sub stats, ATK%, Energy Recharge%, Crit DMG%, Crit Rate% are all good. HP% is not bad since both his Burst and his Shield benefit from it, but Offensively it doesn't has the same impact as the stats listed previously, so just consider it an average roll.

Regarding his Energy Recharge%, 40% should be fine in most cases if you manage particles well, but feel free to stack more if you think it's not enough for your current Party Build.

As a DPS, Zhongli relies on his physical Polearm Damage for the most part, while his Geo abilities become secondary options to increase his practicability in battle - Having a shield fits Melee DPS well, and petrifying opponents makes them easy targets -. There is another example in-game of a Physical Polearm DPS that can work well, namely Xiangling, but it’s worth noting that she’s still considerably worse than strong Elemental Damage dealers such as Diluc and Childe.

The reason is that many opponents have high Physical Resistance%, which forces players to bring Electro and Cryo characters to activate Superconduct on them. This combo, other than being reliant on multiple conditions - switch to the Cryo character to apply the element, then switch to the Electro character to proc the reaction, then switch back to the main DPS -, also restricts your team choices. It’s more practical if the Physical DPS is Electro or Cryo, so just another slot has to be used for the Superconduct combo and it’s also more practical to activate in that case.

Superconduct: Since Zhongli can't generate Superconduct by himself, he needs to be paired with allies that can do that for him against opponents with high Physical resistance. Fischl and Diona make a good combo for that, as Oz deals Electro Damage consistently and he's also a nice particle generator, and Diona has low CD on her Cryo Skill and offers other nice utility like Heals. Other Cryo characters like Qiqi and Kaeya are also usable for this purpose.

Other than Superconduct, Zhongli doesn't have many other Party synergies since Geo is pretty neutral as a element. Bennett is an obvious choice since he's so universal as a Damage Support, and the same goes for Mona - to a lesser extent -. Xinyan provides Physical Damage Buffs thanks to her shield, so she's a nice option as well. Geo character for the Elemental Resonance effects aren't bad either, but generally the other listed Supports are more versatile in practically.