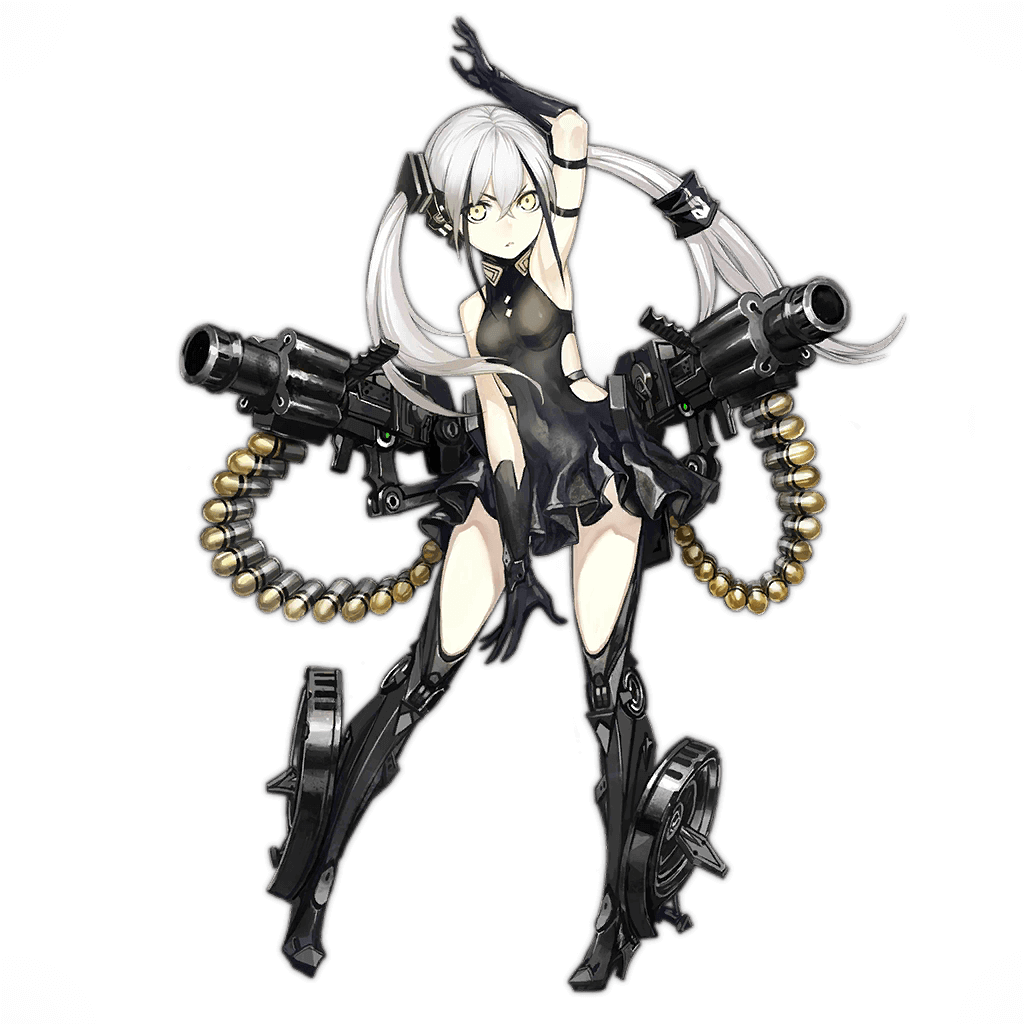 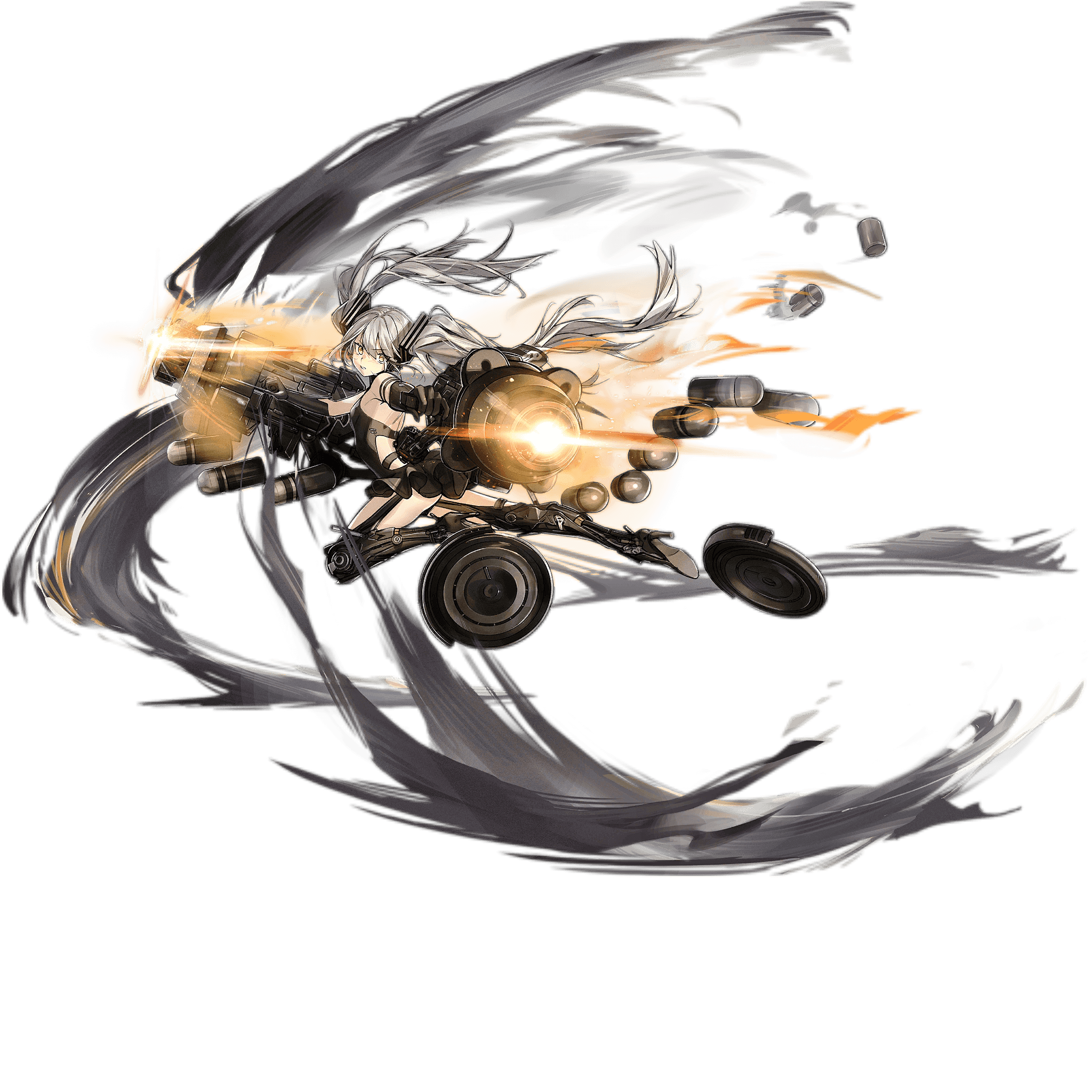 Destroyer’s Tiles are fantastic, and almost tailor-made to synergize with Manticores, and to a lesser extent Aegis and SWAP Aegis. Armor buffs for Armored units are always in demand, and the Damage buff only improves upon a Manticore’s stopping power. The Buff to Machine units stacks with Armored units for extra strength.

Destroyer closely resembles her enemy self, with a sizable Damage stat, low Rate of Fire and passable Accuracy. Like (almost) all Ringleaders, she should be kept off the frontlines, so her otherwise middling durability is not a major concern, and Destroyer does get one major upgrade in her transition to a playable character, all of her attacks are treated as ‘Explosion Damage’, meaning her attacks hit all Dummy Links within a radius, and ignore Armor. Her Skill 2 also lets her function as a HOC, but we’ll address that later on.

Destroyer’s basic attacks are governed by her third Skill ‘Composite Grenade’, and consist of volleys of two Grenades per attack, dealing AoE Damage. Both Grenades will target the same enemy, which does leave Destroyer somewhat susceptible to Corpse Whipping, or wasting shots on an enemy that is already dead. With 12 Grenades in her magazine, Destroyer will need to reload every 6 attacks, taking a fixed two seconds. This cannot be reduced by external means, but appears to be interrupted by her Active Skill. Finally, this Skill cuts Destroyer’s Rate of Fire to between 22 and 39, depending on Skill levels and Destroyer’s Potential. Thanks to her hit per shot Damage, this is less of a hindrance to Destroyer’s abilities than it seems, but it does make leveling this Skill a priority, due to the massive improvement in Destroyer’s effective Rate of Fire. Destroyer will also overperform against large swarms of enemies, such as Strelets, where her AoE damage is favored, but will comparatively struggle against enemies such as Minotaurs, Doppelsoldners, or Patrollers, which tend to appear as single large HP targets that Destroyer cannot exploit explosions and dummy link splash damage to defeat.

Inferno Reload, Destroyer’s Skill 4, builds on her basic Attacks. The first Grenade fired at battle start and after reloading deals increased Damage, as well as applying a burning and vulnerability effect in the attack’s AoE. While the AoE is small, and increasing enemy HP has cut into the effectiveness of Molotov effects in general, thanks to Destroyer’s high base Damage even a small fraction of her base Damage as ticking Damage deals a respectable amount of Damage, which is further enhanced by the minor Vulnerability effect applied. While it is slowly losing its novelty, Vulnerability remains an uncommon effect, even though the ability to boost the damage from all sources, including HOCs, inflicted on a target is quite potent. In return for this extra effect, Destroyer’s burning Damage ticks slower, and has less uptime than a Skill Level 10 SMG Molotov, but adds a respectable Damage kick early in the battle either by letting her allies burst down targets faster due to the Vulnerability effect, or by boosting the Damage from the first HOC volley.

Destroyer’s Skill 1, ‘Wind Grasping Hand’, is ripped straight from Gaia’s special attack in Deep Dive. sad Red noises
Destroyer fires a large number of grenades cross pattern, centered on the enemy with the highest HP dealing up considerable Damage to all enemies within the area. It also ignores Armor completely, and will do very well at clearing large clusters of enemies such as Strelets, ELIDs, Cyclops, or Nightmare zombies, but also loses potency against singular targets. Highest HP targeting is generally not a concern, but it can result in Destroyer bombarding an approaching Doppelsolderner or Hydra instead of the cluster of enemies you want her to aim for so be a bit careful about what can be targeted in certain battles.

Now, with all of that out of the way, let’s discuss Destroyer’s abilities as a HOC, which is governed by her Second Skill.

For some quickfire bullet points:

As a HOC Destroyer retains her slow Rate of Fire and high Damage profile, firing two shots every 6-10 seconds, dealing purely Lethality Damage, meaning she will still need ATW support when fighting shielded Paradeus such as Doppelsoldners, Gladiators, and Patrollers. Her AoE is smaller than other HOCs, and her Damage per shot will be in the middle of the pack. In return for these performance issues, Destroyer can be fielded anywhere a Coalition Echelon can be deployed, without the need for a Heavy Heliport, and provided her Coalition Allies are capable, holds her own in Combat. Overall, Destroyer should be treated as a nice bonus to using her in combat, rather than as a HOC, outside of one Scenario.

Destroyer’s HOC status does enable SF Dragging for the first time one EN. This is a low resource method of leveling Sangvis Units although it does take a considerable amount of time, using 8-2 and a pair of friend Echelons with Ringleader HOCs, favoring Destroyer, White Nyto and Dreamer, although other HOC Ringleaders that can act as an HOC can be used.

The major point to note here is that Commanders will not use their Destroyer as an HOC, but rather summon a Friend Echelon who happens to have Destroyer. As she acts as an HOC unit outside of combat, Friend Echelon Destroyers also can act as one, and thus provide fire support to your dragging team.

Unlike traditional T-Doll Corpse Dragging, SF Corpse Drag does not require two teams to resupply the DPS unit, because

On the other hand, SF Corpse Drag does require an enemy to tank damage, much like M16 in 0-2 and an SG in 12-4E, so it is advised to leave one Manticore as tank.

Also, unlike traditional Corpse Drag, there isn’t a limit per run as to how much Commanders can Corpse Drag, as it abuses the nature of Friend Echelons and Enemy Heliport spawns. The map used for SF Corpse Drag is 8-2, and the setup is fairly simple, as shown in the image below:

As to how many turns it’s possible to farm? As many as possible to plan with Planning Mode, or until the tank is in dire need of repairs: 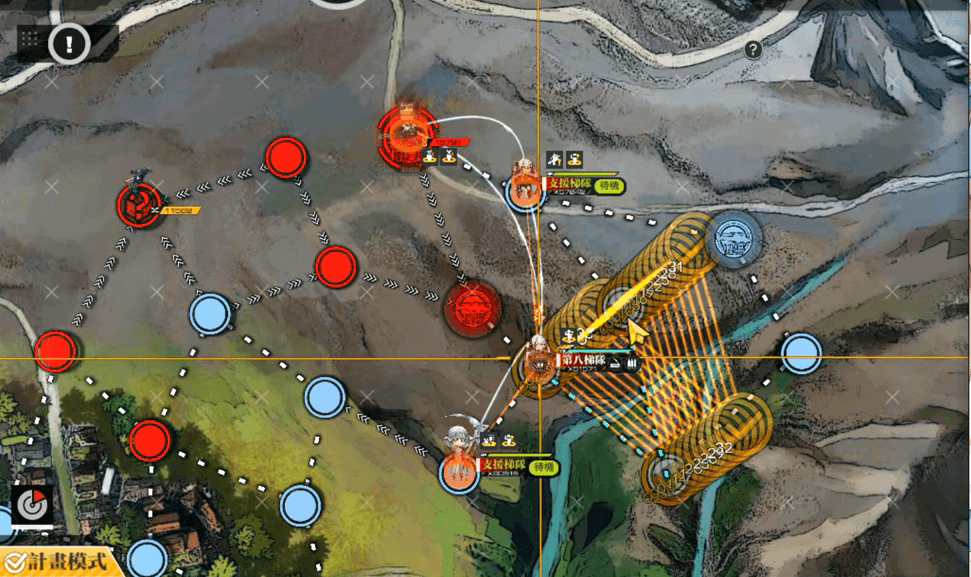 Please see Ceia's Video for a visual example of the setup: