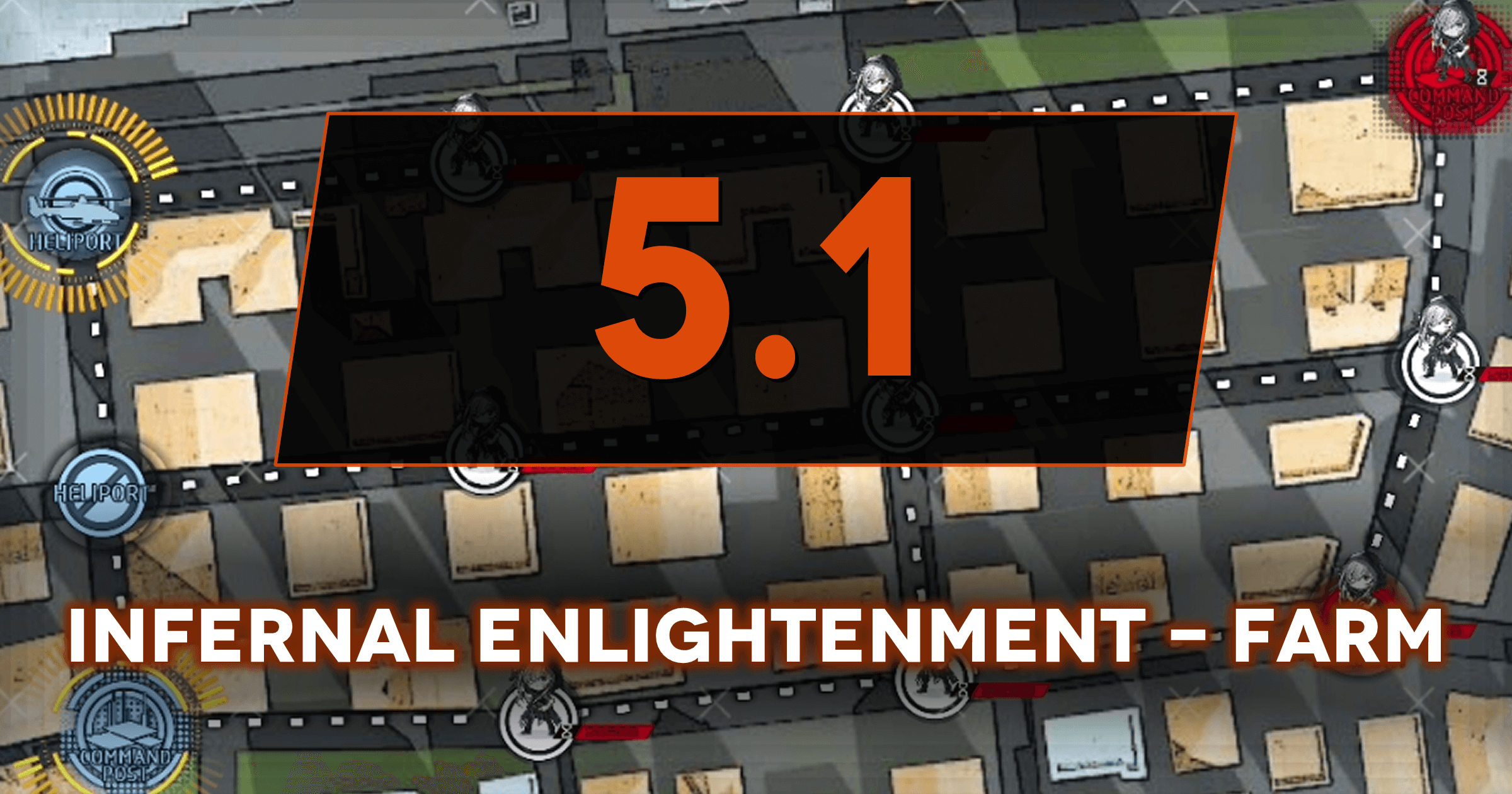 5.1 is an huge downgrade compared 4.1 in that it has an excessively high farm cost, both in terms of repair bill and ammo used. This map really makes up for the "Infernal" bit of its name.

As always, this is a general guideline on farming teams for Infernal Enlightement Infinity to help Commanders who want to farm the map for one of the Limited Time T-Dolls. As always, Commanders are encouraged to adapt this farm to suit their needs and may require fewer or more Dolls depending on the rarity of their Fairies, Dolls and equipment available.

A small Q&A about this map.

Can I farm this map for Daily boxes?

Yes! This is a Clear farm, and each Clear awards 15 Daily boxes. Commanders need to farm this map 5 times in order to farm all Daily boxes.

What are the farmable T-Dolls in this map?

Should I farm the T-Dolls on this map?

Refer to Should you Farm Guide for more details.
TL;DR: No. If you need any of the T-Dolls in this map for Collection, I suggest farming medals in the other maps.

Thanks for Zessy (Zeseling#6507) for providing a better route of E5-1 Infinity map!

This route goes through the middle, avoiding one fight while still retaining the 3 checks per Clear farm. For those without Flash rounds, this save up a fair bit on the repair bill.

The bane of newer Commanders

This map will make use of 1 Farm Echelon and 1 Dummy Echelon.

This map unfortunately cannot make use of M4's Mod cannon simply because the incoming damage is too big for the maintank.

Do not use an SMG as tank. The huge amount of enemies per node will simply melt your SMG. Because of this, it's highly recommended to use an SG as tank.

As the enemy's damage is in the ~20 range, any SG with a Gold Armor will be capable of tanking their shots.

It's highly recommended to either field a shield HG like P22 or HS2000, or use a Flash round to minimize/nullify the repair bill (check section below).

Veteran Commanders can use M4 Mod III + an SG with Flash rounds (if you were lucky enough to grab one). Recommended using statstick fairy (Parachute, Beach, Command, Artillery, Warrior) to speed up the farm.

Newer Commanders can also do the same strat if they lucked out on acquiring a Flash round. However, as they are likely to either not have a Mod III M4A1, maxed AR gold chip and lower statstick fairies, it is recommended to bring a HG to speed up the farm route, otherwise they'll be spending a significant amount of time per node. Alternatively, bring two more ARs, one of them being a Grenadier.

If Veteran Commanders wish so, they can bring a RoF HG to speed up the farm. Preferable choices are Five-Seven and Stechkin Mod.

This map requires capturing the Command Post to be cleared.

Commanders should use the bottom route to make the most out of this map.

Above is circled which enemies contain the Limited Dolls.

Commanders will be farming this map for 3 checks + S-rank check.

All credits to Ceia. Long he may live in our hearts and farms.