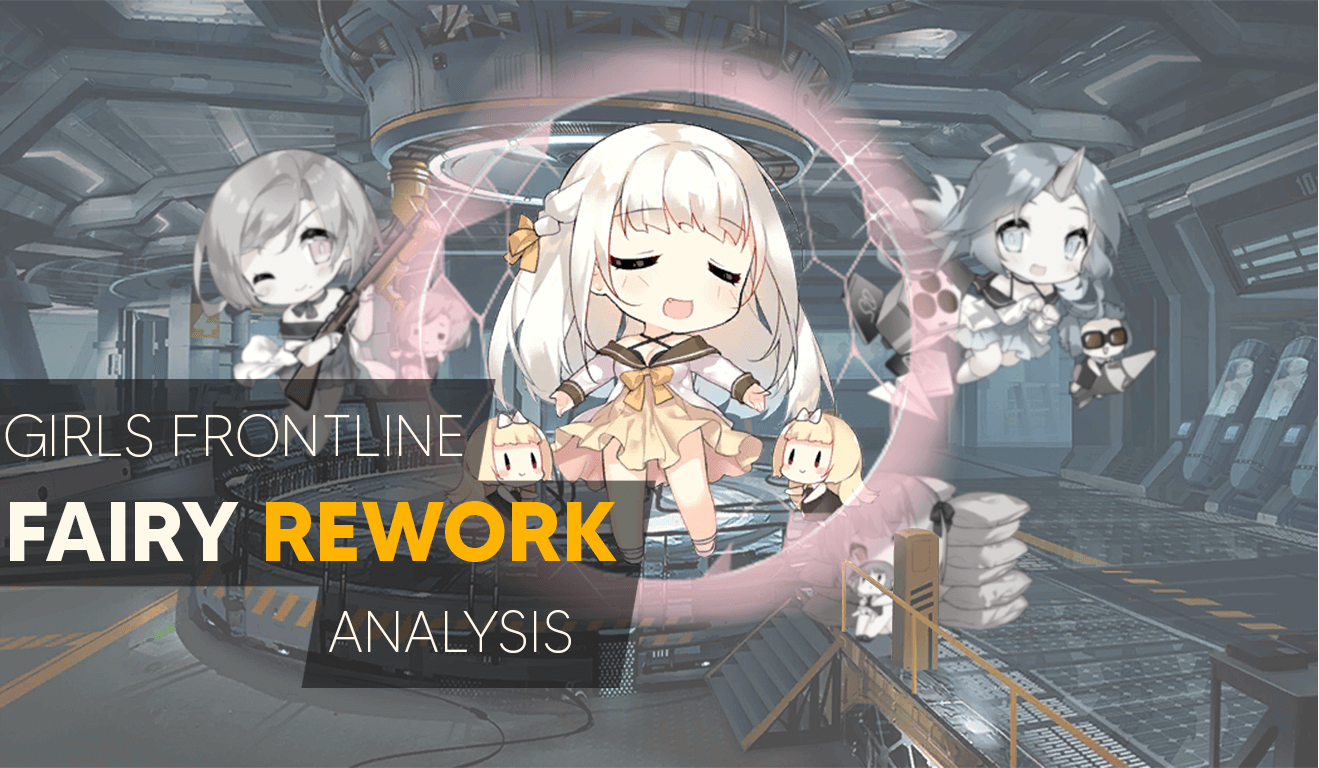 On foreign servers (CN/KR/TW) per one of their Anniversary Streams’ promises that they’d rebalance Fairies, it was announced that some fairies would be reworked with the release of 2.09. The reworked Fairies were:

In a pleasantly surprising turn of events, during March Roadmap’s Q&A it was announced that we’d be getting these reworks in March, rather than at the release of 2.09, with the reworks being officially released on March 1st.

Note: Due to a “bug”, Defense Fairy rework was pushed back to 2.09 release in classic mica fashion. It’s speculated that the bug in question is the  "unsupplied dolls are link protected for full 30s" that was seen on foreign servers before being patched up. Another hypothesis is that it could also be due to the fact that G36C Mod’s Skill is not available in 2.08. Regardless, we’ll still cover the change here. 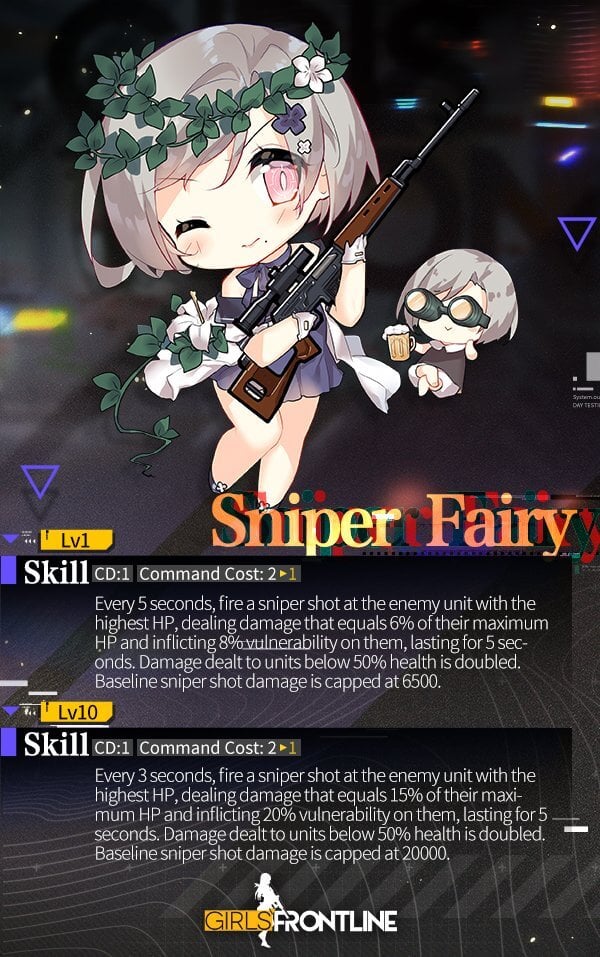 How it was: In the next battle, aim at the enemy with the highest HP and deal 20000 Damage

How it is after rework: Every 3 seconds, fire a sniper shot at the enemy unit with the highest HP, dealing damage that equals to 15% of their maximum HP, and inflicting 20% vulnerability on them, lasting for 5 seconds.

Damage dealt to units below 50% health is doubled. Baseline sniper shot damage is capped at 20000.

Sniper Fairy is probably the biggest change, going from a total fodder fairy to an actually decent one. Due to scaling enemy HP pools, which also include Boss HP pools, Sniper fairy aged poorly since Deep Dive, to the point that Sniper and Barrier were the sole Fairies from the general 500x4 HEC pool to be actively advised to be used as Parachute Fairy fodder rather than raising them.

To illustrate how useful she has become: Dreamer in Dual Randomness’ Ranking Hole 2 has 178000 HP. With the Damage capped at 20000 (since 15% of her HP is ~26K) it would take Sniper only 27 seconds to kill her, not counting “below 50% HP” and vulnerability shenanigans and T-Dolls DPS contribution, whereas before she’d only reduce Dreamer’s HP by ~11%.

Above I mentioned “Below 50% HP” and vulnerability shenanigans. Essentially, after some testing, it seems that, while the Damage cap is still applied once the “below 50% HP” buff is applied, it’s not applied to the vulnerability effects. That means thatttttt, for the following scenario:

This is valid for multiple sources of vulnerability, not just Sniper herself. So other sources, like HP-35, also bypass said limit. It’s also worth noting that Sniper’s vulnerability acts as a sort of 20% Damage buff, as the 20% vulnerability she inflicts at Skill Level 10 translates to 20% more damage taken, a sort of buff that HOCs and Fairies (like herself) can take advantage of.

However, not all is flowers, and Sniper’s awful Aura remains the same. That means that she just went from fodder fairy to a niche fairy, and is perhaps more suited to bossing battles than general battles.

She’s best suited against battles with medium to high HP pool enemies where she can rack up a significant amount of Damage contribution.

Should I level up Sniper?

Absolutely. Despite her meager aura, Sniper really earned her place among the fairies that should be worked on. That does not mean she should be prioritised over other more important fairies, like Command, Artillery, or Taunt/Twins, but she is now a solid option to level up. 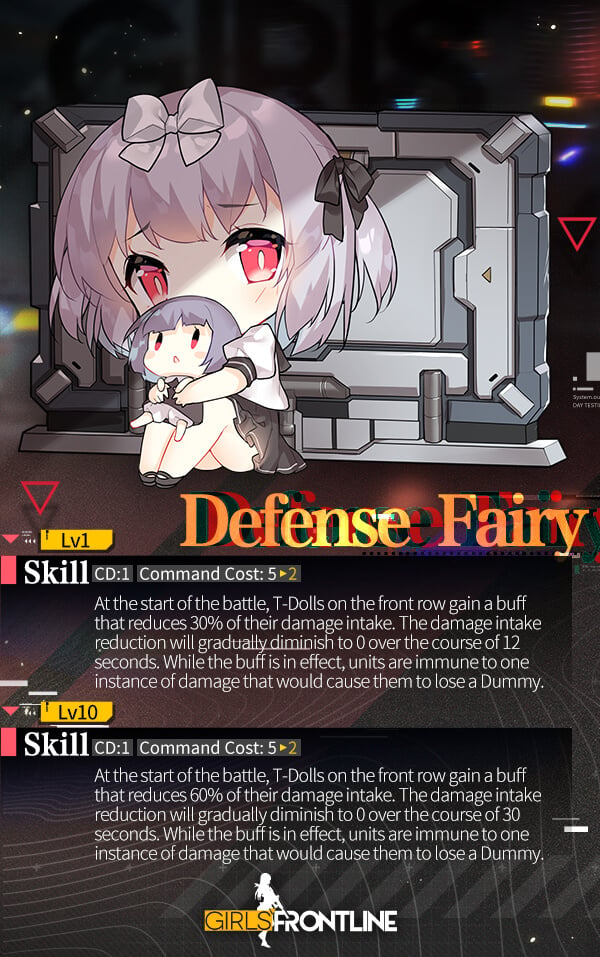 How it was: For one turn, reduce the damage taken by all units within the Echelon by 30% for 20 seconds in all battles.

How it is after rework: At the start of the battle, T-Dolls on the front row gain a buff that reduces 60% of their damage taken. The damage taken reduction will gradually diminish to 0 over the course of 30 seconds. While the buff is in effect, units are immune to one instance of damage that would cause them to lose a Dummy.

There isn’t much to discuss on this fairy. As Girls’ Frontline battles focused on a “the best defense is a good offense” meta for a while, Defense Fairy never had much room to begin with. Add in that she belongs to the more expensive pool of 2000 2000 2000 1000 that mica should have never made, and the outcome is a fairy that is rarely seen, let alone rarity increased, to the point that having a 5 star Defense fairy is akin to a badge of longtime HEC-er veteran Commander.

Since mica has yet to touch the stupidity that is the expensive fairy pool production, it’s unlikely that Defense’s usage will change. While now she provides more defense capacity, the hurdle that is increasing her, especially when cheaper defensive fairies exist (Reworked Shield, Taunts, Twins, and to some extent Barrier), means that she is unlikely to see extensive usage.

Should I level up Defense?

2.09 is still a ways from the release of this article, so unless mica decides to rework how fairies are produced, it’s unlikely Defense will be recommended in the future.

Do keep the copies that’ll spawn your production when you try to acquire Parachute Fairies just for the flexing tho. As she just gives 10-15 dev exp to other fairies, there’s little reason to fodder her elsewhere. There is also little reason to actively level her up. 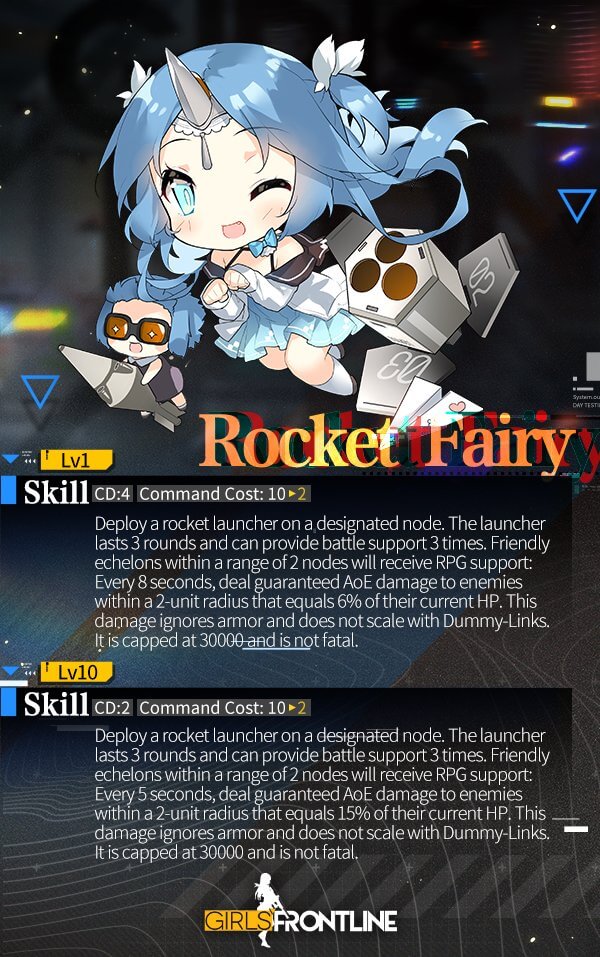 How it was: Deploy a rocket at the designated node. In the next turn, deal 20% of the current HP Damage to 5 random enemies within a range of 2 nodes. Ineffective against bosses.

How it is after rework: Deploy a rocket launcher on a designated node. The launcher lasts 3 rounds, and can provide battle support up to 3 times. Friendly echelons within a range of 2 nodes will receive RPG support:

Every 5 seconds, Rocket deals guaranteed AoE damage to enemies. within a 2-unit radius, that equals 15% of their current HP. This damage ignores armor and does not scale with Dummy-Links. It is capped at 30000 Damage and is not fatal.

Rocket fairy is also another fairy that belongs to the expensive Fairy pool. although she has her own pool: 500 2000 2000 1000. That also means that, like Defense, she’s a rare fairy that the majority of Commanders are likely to have never acquired, let alone used.

The biggest hurdle on using Rocket was her ridiculously high Fairy Points cost of 10. With Parachute Fairy and stalling fairies (like Taunts, Twins, and more recently Beach) being pivotal for minimising damages in battles, as well as map control we don’t even have that anymore maximizing AP usage to engage in battles, a fairy that costs 10 points when points are capped at 200 and only regen at a rate of 15/6hr is a pretty expensive fairy. Even more considering that her actual contribution was an RNG-based Damage of 20% for the enemy echelons.

With the rework, Rocket fairy was turned into Griffin’s own pocket HOC, and with a much more acceptable cost of 2 fairy points. Because of its pseudo-HOC status, Rocket doesn’t show the traditional incoming warning that HOC bullets does, while it also strikes much faster than her true HOC counterparts. Rocket’s first shot is also shot at the start of the battle (t=0 seconds) and has ~0.5s of travel time. It should be noted that Rocket’s shot lands before any HOC shot lands, which includes SMAW’s tracer round.

Rocket also has a couple of peculiarities due to her being a Strategic Fairy type: Her value is given much more from her Skill than her Aura. Because the new Rocket fairy can act as a pseudo HOC, and only really needs her Skill levelled rather than her Rarity (though that’s also nice to level up), Rocket actually has a use in future rankings where bringing HOCs is a limited option, either due to lack of Heavy Helipads or the Echelon limit on Ranking also including HOCs (like it did on Dual Randomness’ Ranking Hole 2 and Poincare Recurrance’s ranking).

Should I level up Rocket?

Yesn’t. While Commanders should acquire at least one Rocket Fairy, and level up her Skill, there isn’t a big need in actively crafting for multiple copies of her (Sorry Yuzu). As mica have yet to address the expensive fairy pool, she will remain a rare fairy to the point that having a 5 star Rocket fairy is akin to a badge of longtime HEC-er veteran Commander. 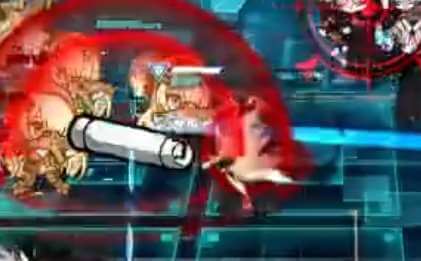 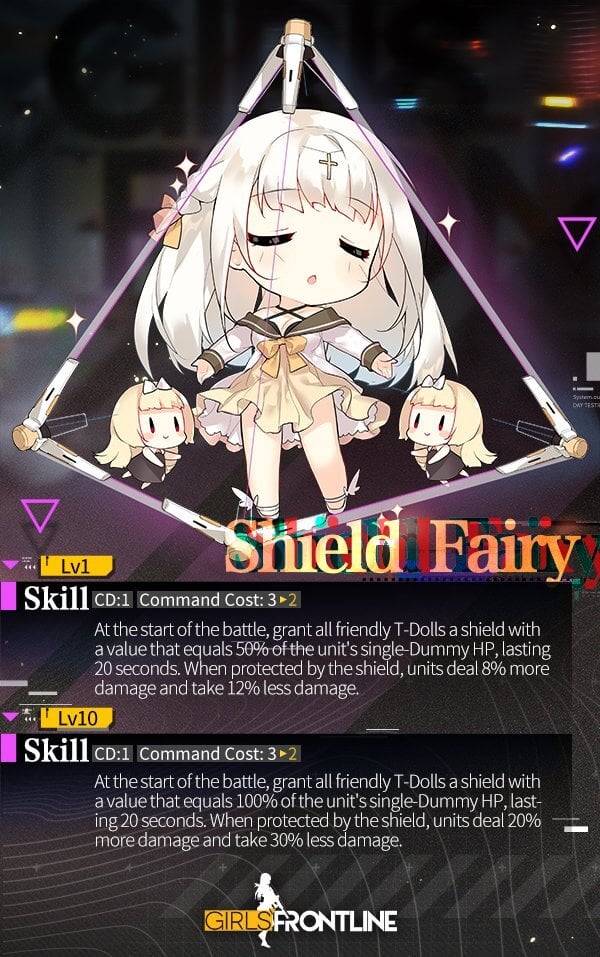 How it was: In the next battle, grant a shield to all SMGs in the Echelon. Each shield can absorb up to 150 Damage.

How it is after rework: At the start of the battle, grant all friendly T-Dolls a shield with a value that equals to 100% of the unit’s single-Dummy HP, lasting for 20 seconds. When protected by the shield, units deal 20% more damage and take 30% less damage.

Shield is another contender for the second-best buff rework in this Fairy rework batch for a number of reasons: Her skill is no longer specific to SMGs, meaning that RFHG teams can now fully make use of her; she provides team-wide protection lasting for 20 seconds, which means that the echelon, especially DPS Dolls, would be safe from AoE enemies like Gundams and Minotaurs; her skill became a sort of improved version of P22/HS2000 Skill, as it provides a shield, a damage buff that is fully appreciated by DPS Dolls, and a damage reduction that is fully appreciated by tank Dolls like SMGs and SGs (and HGs as well).

Lastly, her Skill also had a cost reduction which is also a plus.

Due to her restriction to SMG, Shield fairy was sort of relegated as a Theater fairy during the dominance of RFHG meta post Singularity, to the point that some recommended using her as fodder for Parachute Fairies since ARSMG usage was low on ranking, and there wasn’t really a need for her on story content, over other defensive fairies like Taunt and Twins. While Shattered Connexion did bring back ARSMG to the meta (somewhat), there still wasn’t a full reason to use her, other than to make Archers hurt a little less.

Now that she works all around, Shield has a bright future ahead of her, especially given that stalling MGSG teams become a thing in Mirror Stage and Poincare Recurrence meta. Being usable by all echelons also makes her a nice addition to the small roster of protection fairies we have.

Should I level up Shield?

Absolutely. Not only does she belong to the general 500x4 pool (which means she’s easy to acquire) she now works across all echelons and has potential use in future rankings. Outside of rankings, she can be especially useful in RFHG teams, as these teams are notoriously glass cannons, relying solely on defeating enemies as fast as possible since HGs are not tanks. While a 20% Damage buff at the start of the battle is hugely appreciated by the RFs, the shield and Damage reduction provides a small defensive capacity to HGs, which will be especially useful with Welrod Mod teams.