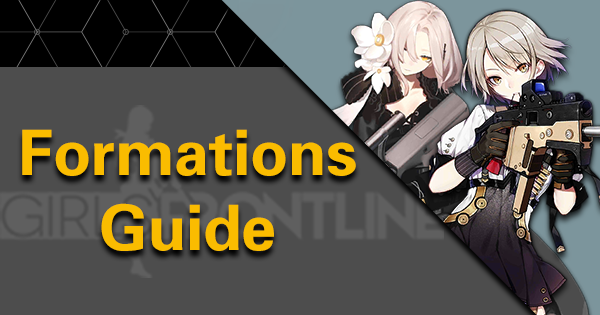 A vital part of creating an echelon is determining the formation the units are going to be arranged in, and like units, not all formations are created equal. These are a few commonly used formations to help you start out. 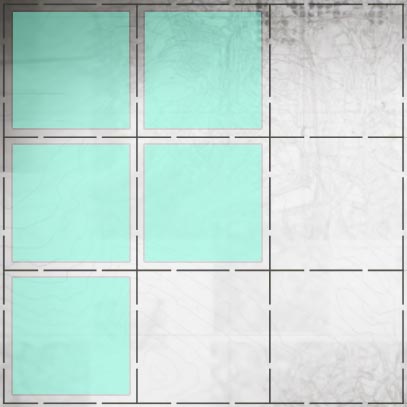 This formation is the most commonly used Echelon formation, and rightfully so. The F formation is so prevalent because it allows for both efficient buff distribution and somewhat equal distribution of damage dealt to your tanks.

Typically, an AR+SMG Echelon composition using this formation is organized like this:

While an HG+RF Echelon composition using this formation is organized like such: 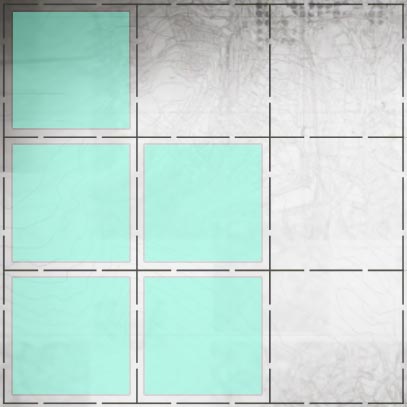 The B formation is almost congruent to the F formation -- the only difference being that the main damage dealer (the AR that receives buffs from both SMG) and the off-damage dealer (the AR that receives buffs from only one SMG) is switched, and the offtank is moved to the bottom. The functionality is the same as an F formation; overall, the distribution of damage dealt to the SMGs is about the same as the F formation. As the F formation usually results in more efficient distribution of buff tiles, however, this formation is only recommended if you have a buff tile configuration that only works with this particular set-up. 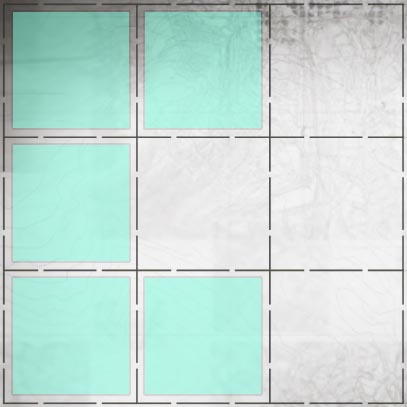 The C formation actually somewhat contrasts with the previous two formations in that its distribution of damage dealt to your SMGs is practically equal. The distribution of buffs becomes uneven, though, so this formation is only recommended if you have a squad that works particularly well with it. 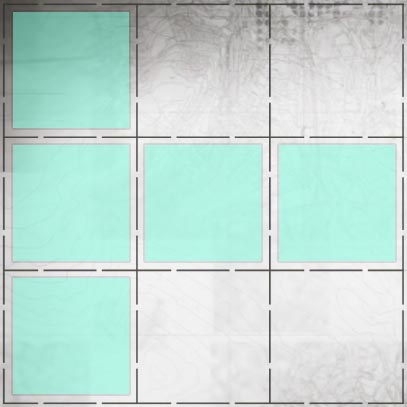 The sideways T formation sees niche usage, but it does its job and does it well. It is used in corpse dragging squads, which fuel only one unit in order to save resources. By putting a tank in the forwardmost spot, only the tank will receive the enemy’s fire leaving your damage dealer and the units you’re dragging safe.

Another use to this formation is in early game HG+RF Echelon compositions. Handguns, unlike SMGs, unlock their Exoskeleton slot at level 80 instead of level 20. Therefore they are subpar at tanking, and sometimes it’s necessary to slot in an SMG in front of HGs in order to absorb damage until the HGs can tank. Putting the SMG in the forwardmost spot will keep the HGs and RFs safe from damage. 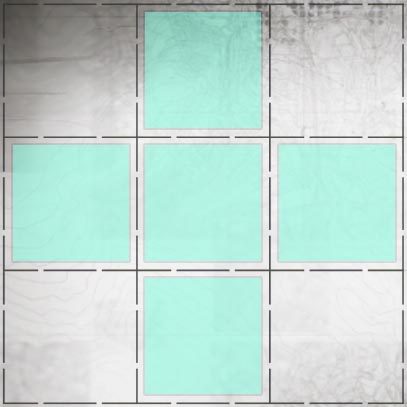 This formation is used sometimes in HG+RF Echelon compositions to optimize buff zones against enemies that won’t deal much damage to your units. A semi-popular squad in which this formation is utilized is when using both M590A and Welrod -- as M590A and Welrod’s positions overlap, M590A is instead moved to the back such that both RFs in the Echelon can take full advantage of M590A and Welrod’s buffs. As there is only one tank now, however, the forwardmost unit has to tank all incoming damage. Additionally, as the singular tank is towards the front of the formations, she will be attacked faster. Overall, this formation isn’t very effective, and therefore is not recommended.

Use for: SG+MG echelons with 2SG 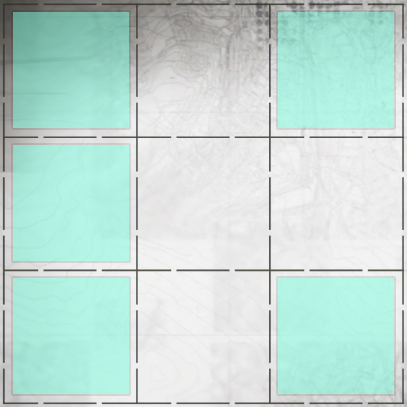 This is the formation optimized for SG+MG echelons with two SGs instead of only one. Although there are some variations -- such as placing an SG in the center instead of one of the sides -- most of the time to get optimal tile buff distribution from the SGs, they’re used in the corners of the grid. The back row can be either 3MG or 2MG as well as an HG. This formation is only used when the SGs used have tile buffs that necessitate this formation (ie. M500, M590); otherwise the Sideways T formation is superior.

This Echelon composition may be basic, but it works the most reliably. They usually utilize 3 ARs in the back row and 2 SMGs in the middle row -- as ARs buff SMGs and SMGs buff ARs, no buffs are ideally wasted. AR+SMG Echelons specialize in consistent damage dealing against any type of enemy. Early on, however, as neither ARs nor SMGs can equip AP shells, an AR+SMG Echelon may have trouble defeating armored units in Night Battles.

Overall, although this Echelon composition can be used as a normal day DPS-focused team, most players fall back to this composition when they first experience difficulty dealing with armored enemies. As RFs can equip AP shells, they have a much easier time against armored units. RFs do have high DMG but low RoF, though, which means that they need HGs to compensate for their low Rate of Fire. Often, high DMG HGs are not used in these squads, as RFs have high enough DMG to overkill most foes. This Echelon composition, when compared to AR+SMG, is a great deal more diverse in regards to the units that can be used to compose it. The following are some examples:

These HG+RF squads utilize two RFs with RoF buffing skills -- mainly SVD and WA2000. As these dolls can buff their own RoF, they don’t need more than one or two appropriate Handgun buffs to cap this stat. Because of this, just enough RoF buffing HGs are used to reach the RoF cap, and the rest of the spots in the Echelon are filled with utility HGs.

These HG+RF squads utilize two RFs that buff their own DMG, mainly M14 and Lee Enfield. As these units cannot buff their own RoF, they require HG buffs to cap this stat. Because of this, these squads are usually run with 3 HGs that can buff RoF. These squads, however, are less efficient when compared to RoF HG+RF Echelon compositions, as this specific composition tends to result in overkill.

These are special types of HG+RF squads that use RFs with certain skills. These skills fire one or two powerful shots after a certain cooldown, so the units who use them want to make those shots count by packing as much DMG into them as possible. Units these skills are therefore used with 3 DMG buffing HGs. Although these Echelon compositions sound good on paper, their initial cooldown is far too long, so they are often neglected in exchange for AR+SMG or other types of HG+RF squads.

This Echelon is the plan B echelon of GFL -- while it clears enemies faster than either AR+SMG echelons or HG+RF echelons, it is also much more Resource costly and therefore is not used often. The basic purpose of this Echelon is to mow down enemies as fast as possible as MGs need to reload after firing for a certain length of time. In addition, as SGs tank by absorbing damage instead of evading it, using SG+MG Echelons against bosses -- who have high health and deal large amounts of damage -- is not recommended. MGs can equip Armor Piercing (AP) ammo, so SG+MG echelons perform well against armored units during Night Battles.

Should You Farm? January Rescue Event