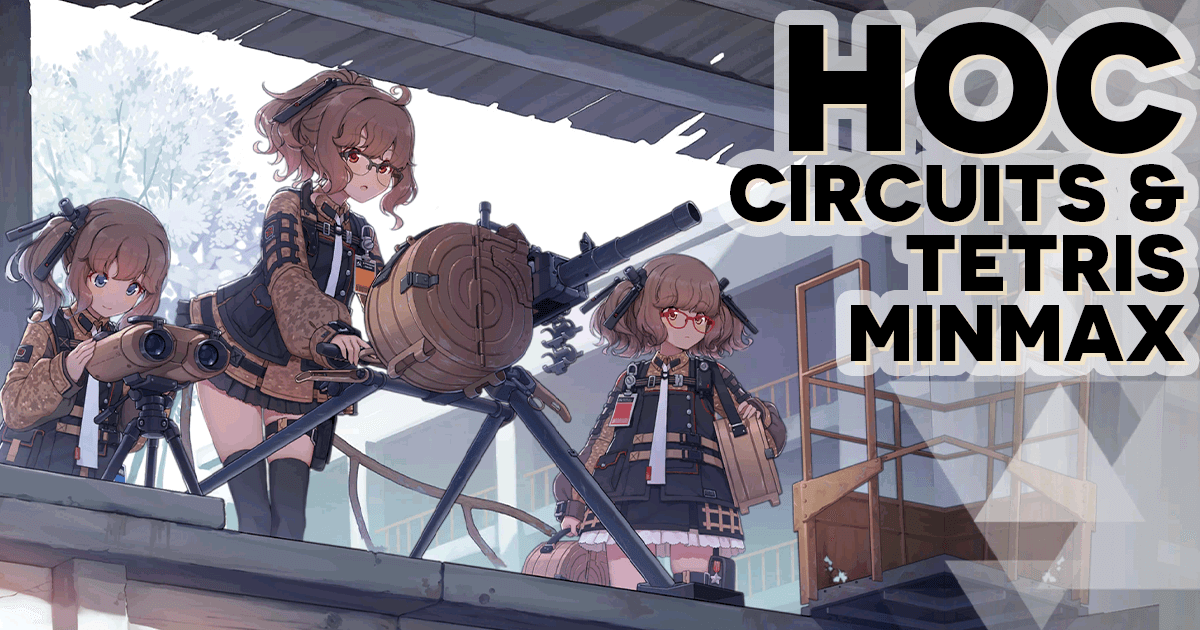 3/27 update: Added the chip enhancement XP requirements (thanks to corsage#0001).

Similar to T-Dolls, only the HOC's stat caps are increased when they level up. To improve the actual stat value, Enhancement Capsules must be used.

When used to improve HOC stats, each Enhancement Capsule will only improve one stat. Fortunately, most stats will improve by more than one point per capsule; each pill is worth 1 Lethality, 3 Pierce, 3 Precision, or 2 Reload depending on which stat you are enhancing. 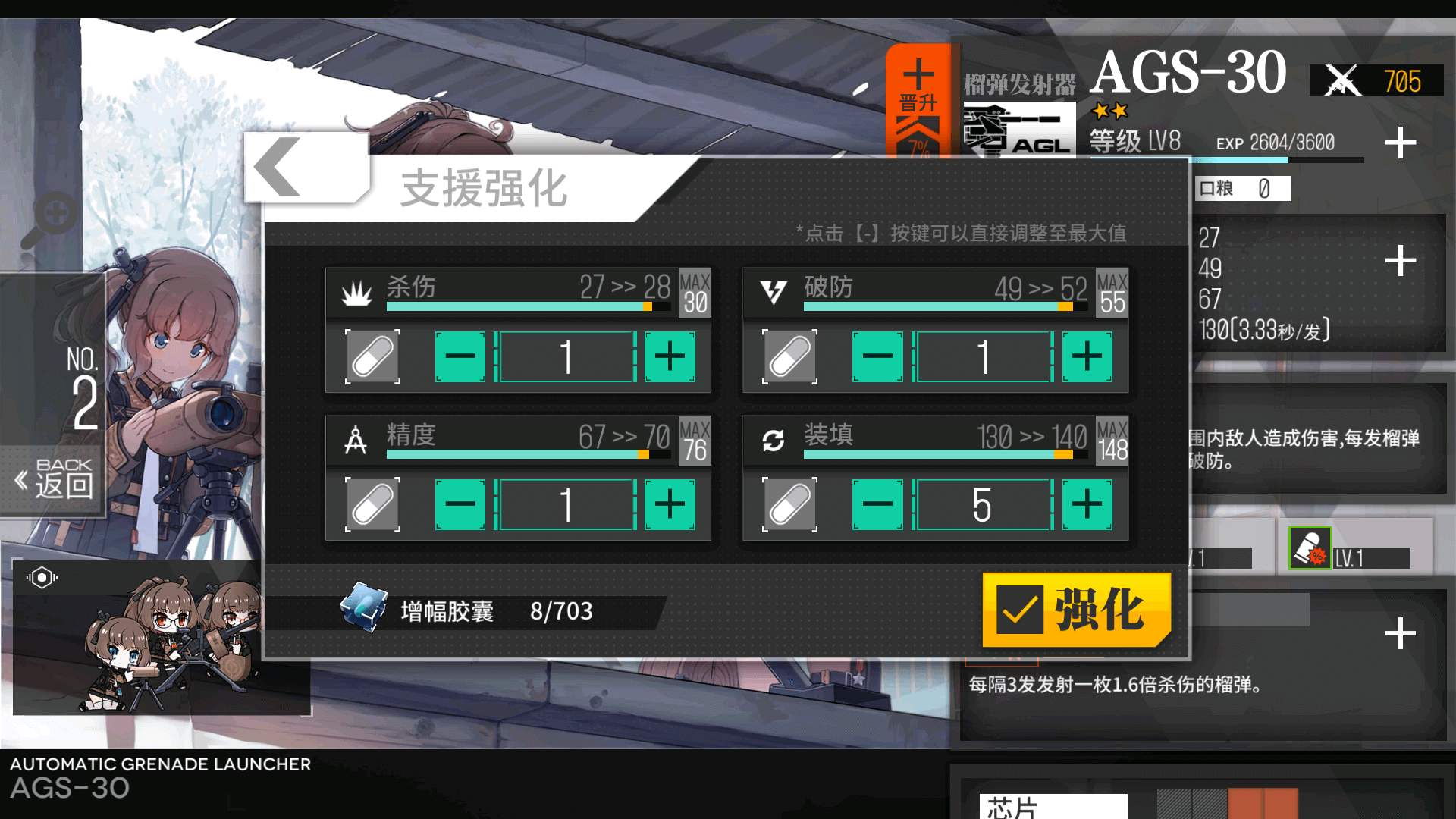 The cost varies per HOC, but is generally around x300, with slightly more capsules being needed after iteration.

The stats from gaining experience are only a small part of a HOC's maximum potential stats, however; most of them will come from the Chips equipped on the HOC's Circuit Board.

The process of Iteration can further enhance your HOC's stat caps beyond 5★, with each Iteration adding what are colloquially called "red stars" to a HOC, up to 10 times (5 red stars).

Iteration can be performed when a HOC reaches Level 100 and 5★.

For detailed stat gains at each Iteration tier, check the HOCs' individual pages.

When performing Intelligence Analysis, the bulk of your yields will be Chips. Chips are basically equipment for HOCs; they come with a random allocation of stats and can be placed into a HOC's circuit board. To recap what was mentioned in the main article, this is how they work: 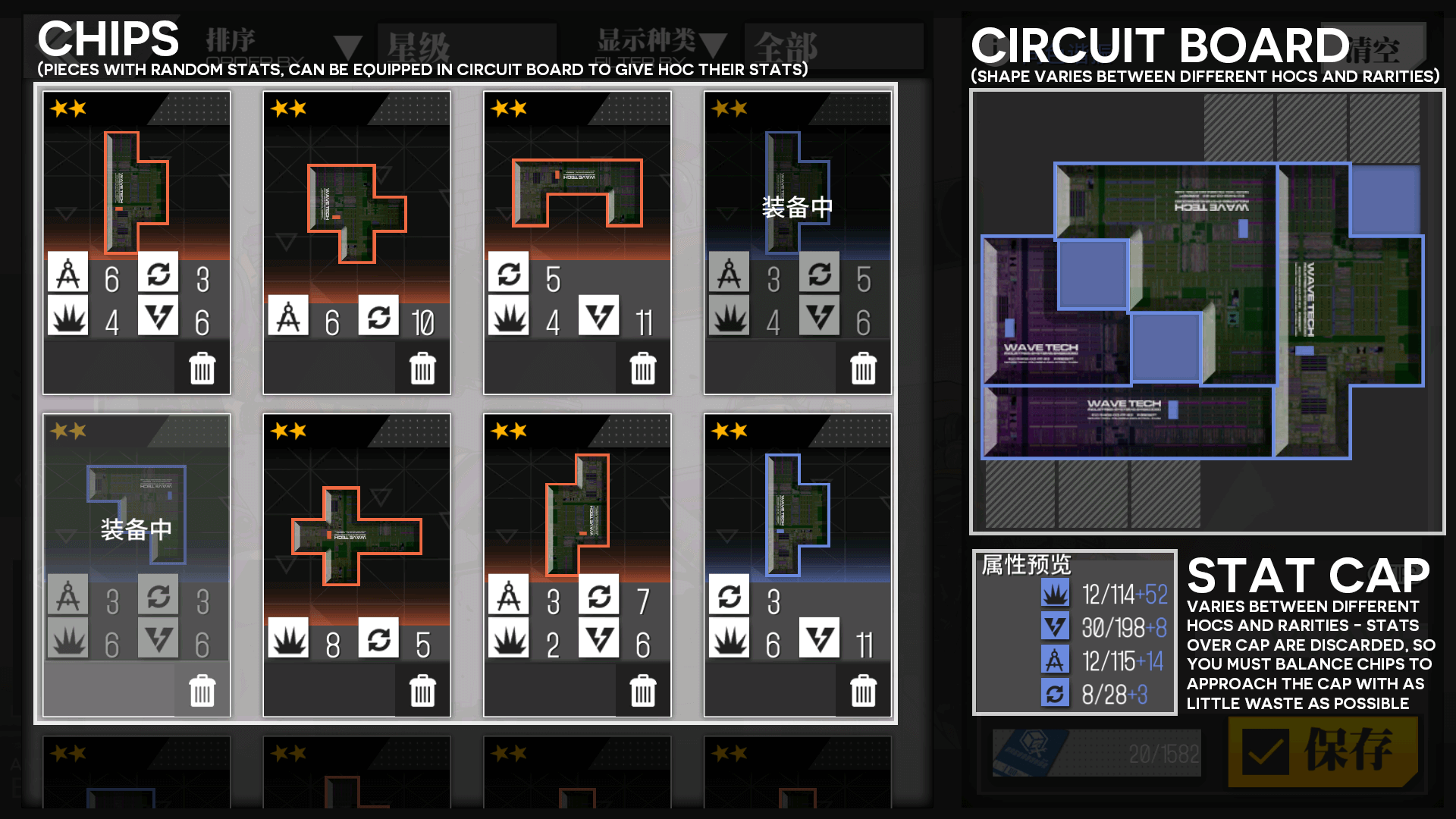 After increasing the HOC's rarity, more of their circuit board will become unlocked, correspondingly increasing the number of tiles and stat cap. (For exact shape and stat caps at each rarity, check the individual pages for BGM-71, AT4, 2B14 and AGS-30)

Chips will vary in four ways that the player should be aware of: Rarity, Color, Shape & Size, and Stat Distribution.

Chips acquired from Intelligence Analysis will vary in rarity between 2★ and 5★. Higher rarity chips are always better, because they are almost always strictly superior to their low-rarity counterparts.

Increased rarity also means increased level requirement - which is why players are recommended to use Special Combat Reports to boost their HOCs to Level 60 ASAP. 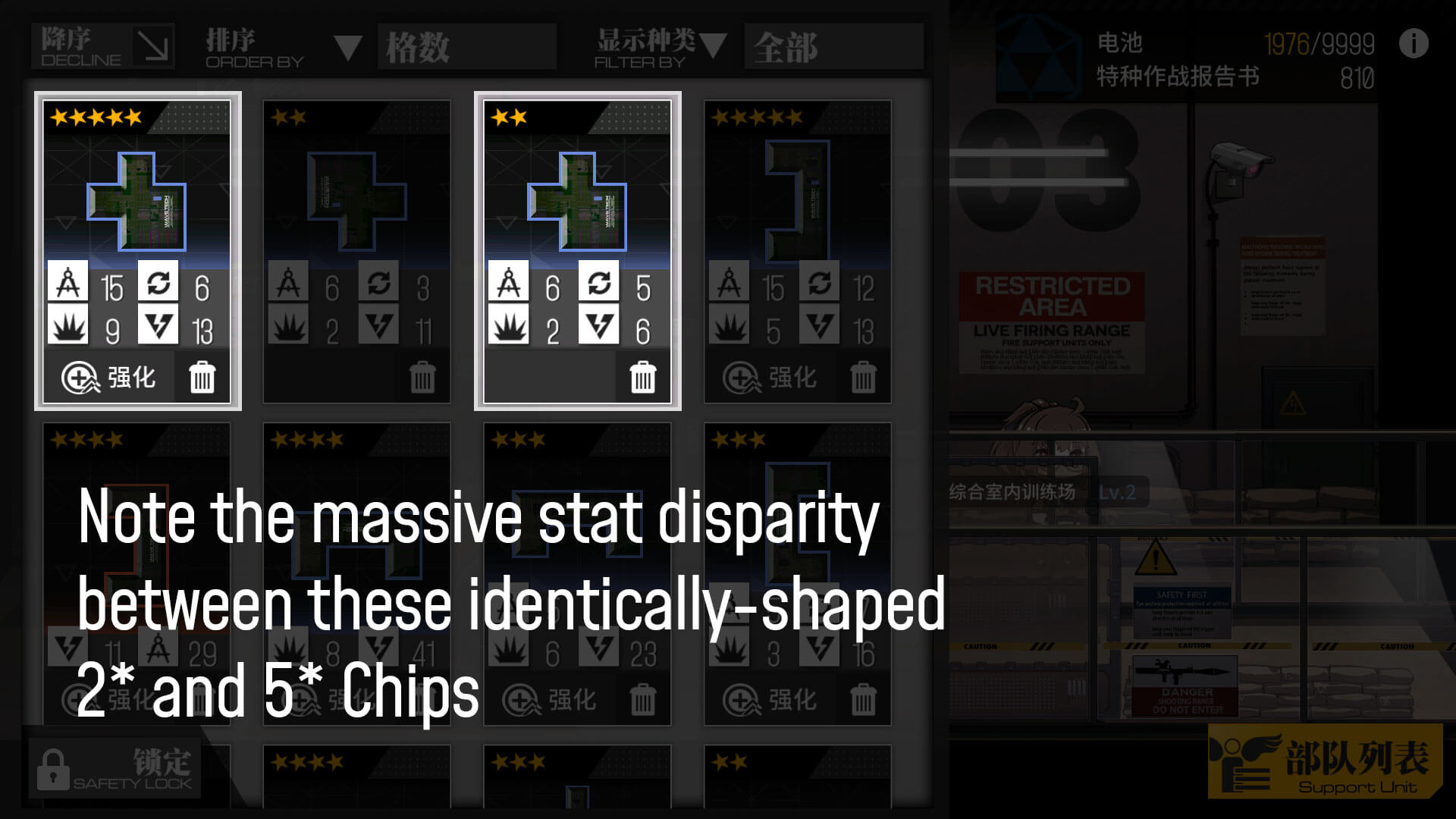 While the idealized endgame Circuit Board is going to be full of 5★ chips, it's totally fine to use lower rarity chips if there's no better chip of a higher rarity. There's no cost for adding or removing chips (so long as you don't rotate them!) so players are free to swap them in and out as desired.

It's even safe to enhance decent lower-rarity Chips that you're currently using, because you can feed them to a higher rarity Chip later and retain 80% of the accumulated EXP. This is technically still a lossy process (and costs double the resources), but can be worth it.

All chips are either Blue or Orange. This affects their affinity with HOC circuit boards, where a Same Color Bonus is given for using Chips that match the color of the equipped HOC.

Commanders do not need to worry about matching color early on, as the scarcity of chips with good stats will be more of a bottleneck than anything else.

All HOC Chips consist of 3-6 square tiles connected orthogonally. Unfortunately, as a rule of thumb, the more difficult a piece is to fit into the Circuit Board, the better its raw stats per tile are.

For example, consider two 3-tile Chips and one 6-tile Chip. The two 3-tile Chips are easier to fit into the Circuit Board since their shapes are more flexible, but their combined overall stats will be slightly lower, assuming a similar stat distribution.

Similarly, consider the 5-tile Chips shown below. The two groups shown below have slightly different base stat values, with the bottom group having very slightly better stats while also being harder to fit into the Circuit Board. 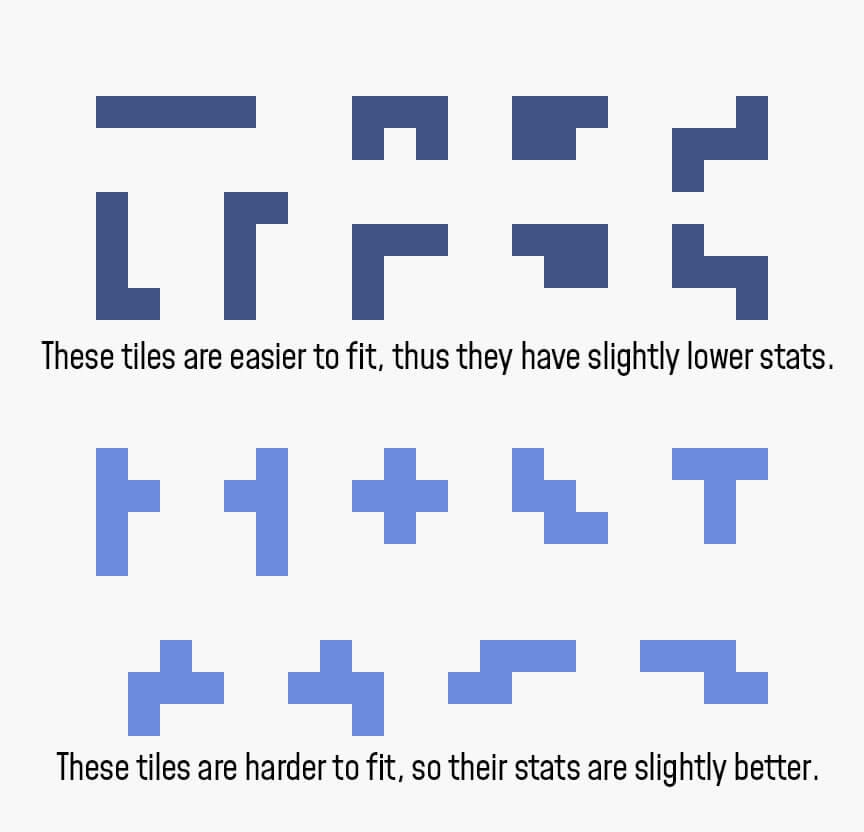 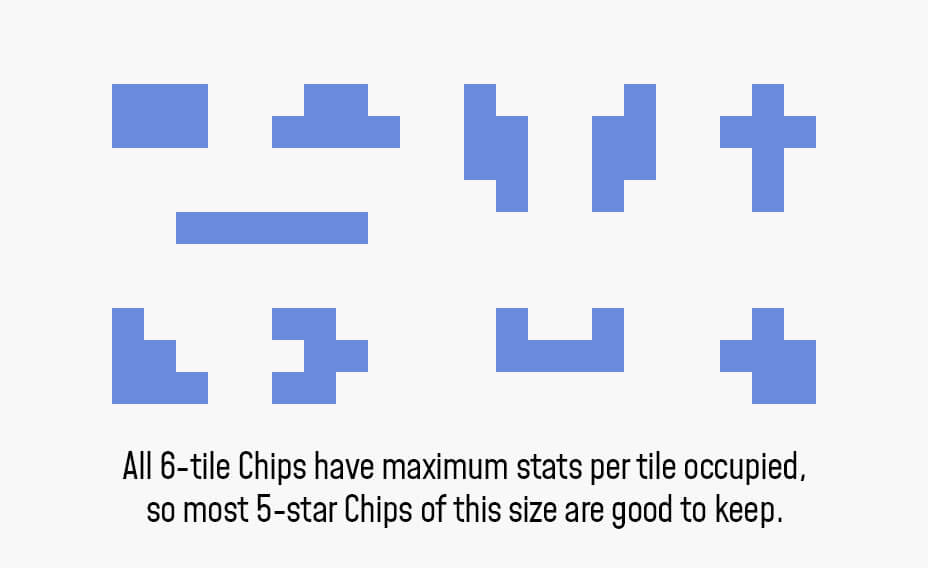 For endgame minmaxing purposes, all 5★ hexominoes (6-tile Chips) and all 5★ pentominoes (5-tile chips) in the lower category should be kept. From there, it's a matter of picking out the ones with correct stats.

Finally, the Stat Distribution of HOC chips is the last random factor players need to contend with.

Every Chip is generated with a set of different stat allocations based on their size (number of tiles). For the "optimal" chips shown above (i.e. the class-2 5-tile Chips and all 6-tile Chips), each tile converts to one random stat at the ratios shown in the below table:

The resulting values are then rounded up. The below infographic shows an example of how random allocation can cause identical-shape chips to have entirely different stats: 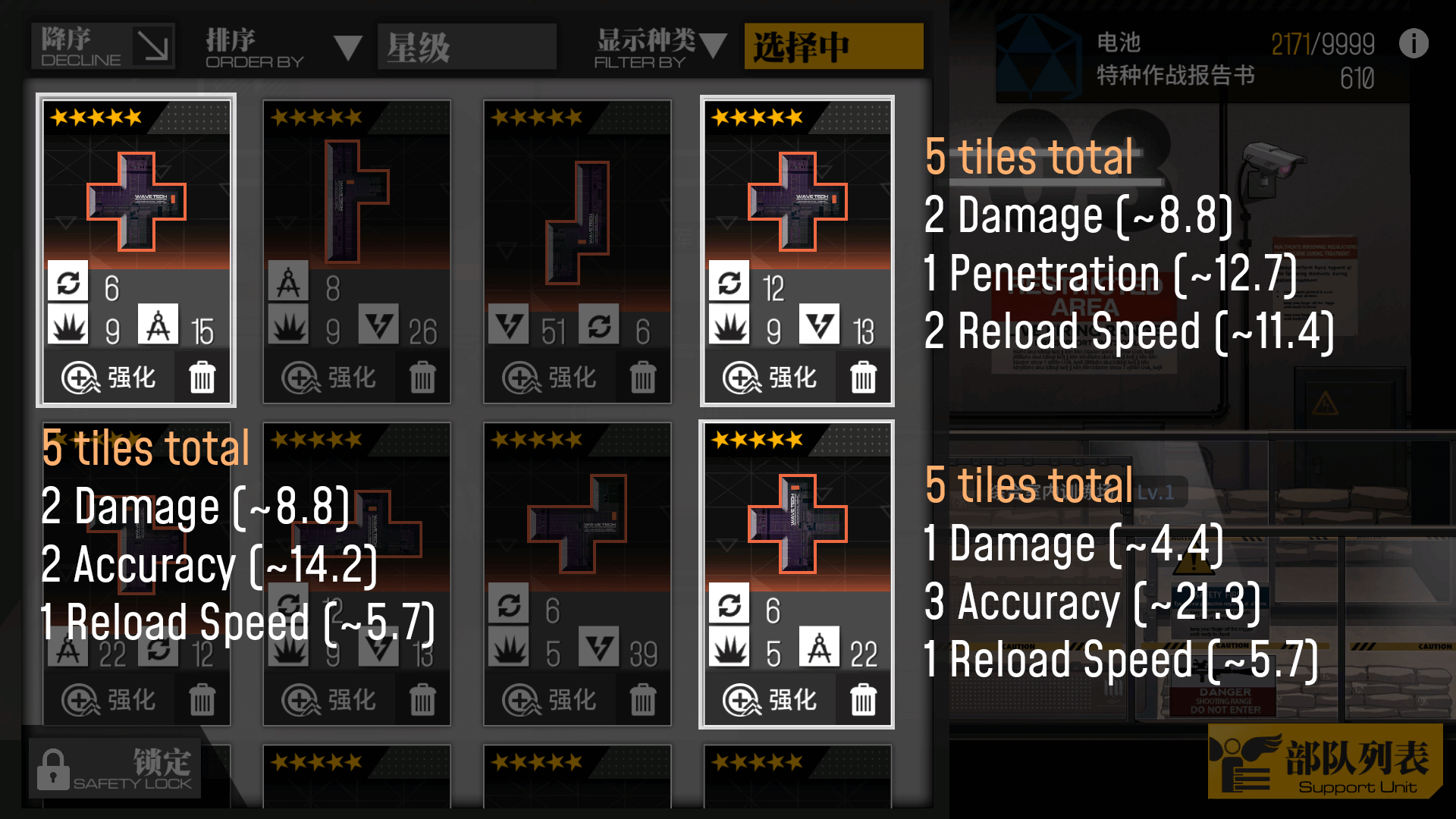 Chips of other shapes or of lower rarity will have slightly lower stats per tile. To keep things simple, this guide will not consider the per-tile stat values for those Chips.

Chips with 3★ or above rarity can be enhanced, with each enhancement level providing a multiplier to the Chip's stats. Enhancement uses other Chips to grant EXP to the chip being enhanced. Chips can also be rotated with Calibration Tickets if their orientation is undesirable, consuming tickets if the rotation is saved.

Enhancement will cost a fairly negligible amount of resources, scaling based on amount of EXP gained. Fodder stats have no effect on the enhancement outcome.

If the Chip fodder is already enhanced, 80% of its accumulated EXP is transferred over. 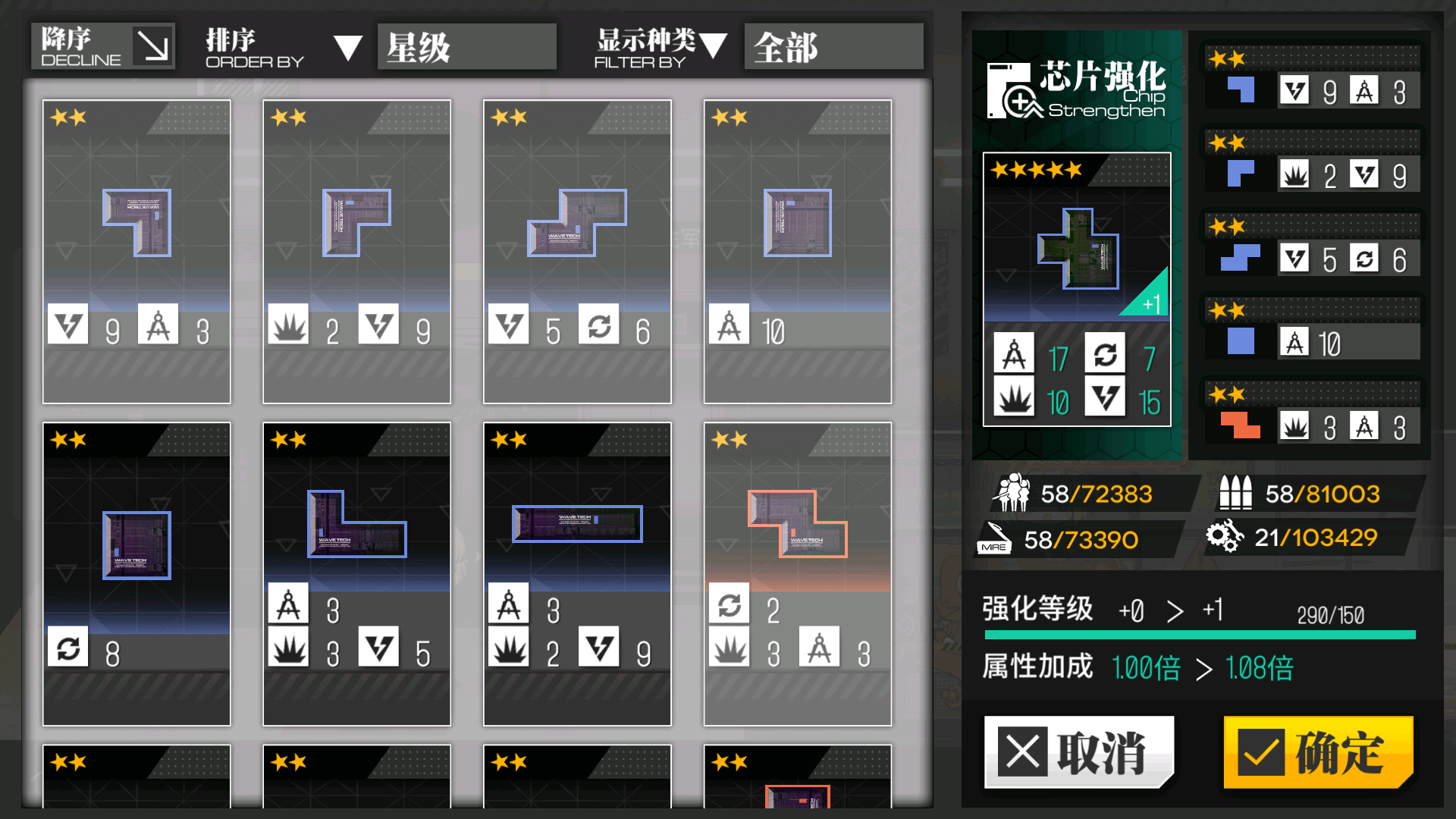 The below table shows the multiplier and XP needed for enhancing 5★ Chips at various levels.

Note: a 1.2x bonus is applied to the EXP gain when the fodder Chips used are the same color as the Chip being enhanced (does not apply to accumulated EXP). Therefore, it is always recommended to enhance using only the same-color Chips.

Recall that stats round up; correspondingly, while these are the approximate stats per tile you can expect from +20 (2.5x stat multiplier) top-tier Chips (5★ variant of 6-tile Chips or class-2 5-tile Chips) when fully enhanced, the actual number may be slightly off due to rounding:

From the above table and the known stat caps of 5★ HOC Circuits, we can extrapolate the number of tiles allocated per stat needed to reach their caps.

Since BGM-71's full board is only 36 tiles and she needs 44 tiles to cap her stats, she cannot fully cap her Circuit stat caps at 5★.

Since 2B14's full board is only 32 tiles and she needs 36 tiles to cap her stats, she cannot fully cap her Circuit stat caps at 5★.

Since AGS-30's full board is 38 tiles and she needs 38 tiles to cap her stats, she can fully cap her Circuit stat caps at 5★.

Since AT4's full board is 36 tiles and she needs 39 tiles to cap her stats, she cannot fully cap her Circuit stat caps at 5★.

Most players will be massively overloaded with Chips after a week or two of Intelligence Analysis; here's a quick rundown on which Chips to keep, in descending order of preference: