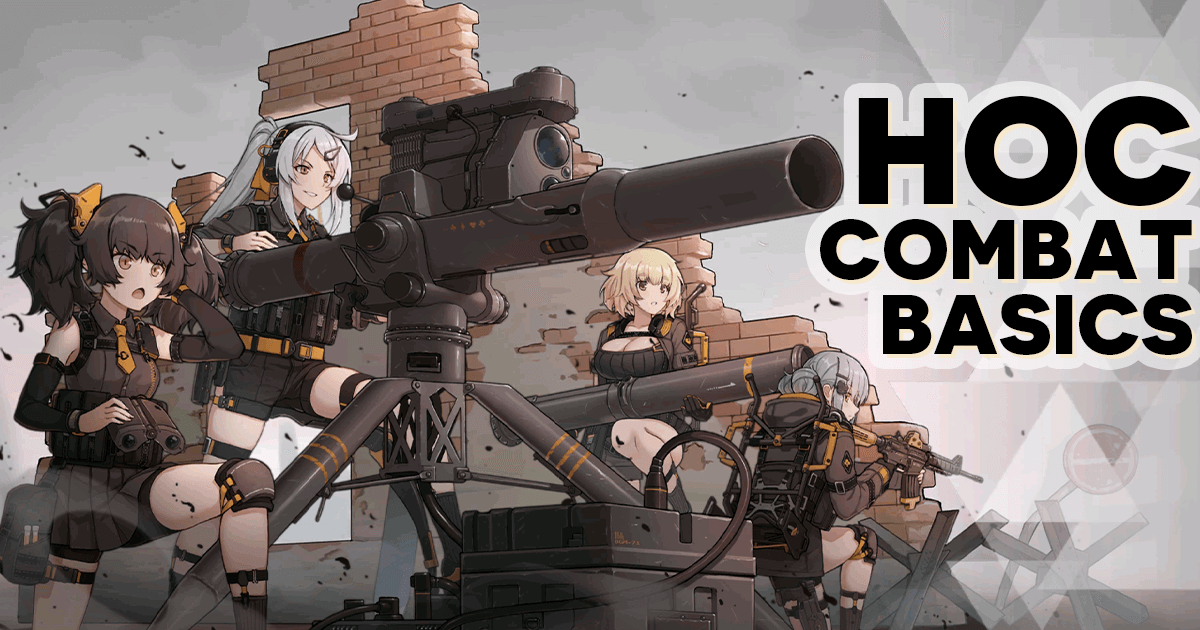 1/12 update: Added a note about the Precision formula.

Note: This subguide assumes you have either read the HOC Basics overview on the main guide or gone through the official EN HOC introduction infographics.

Recall that Heavy Ordnance Corps (HOCs) are fire support units with highly limited deployment conditions as shown in the official infographics, included below for your convenience. 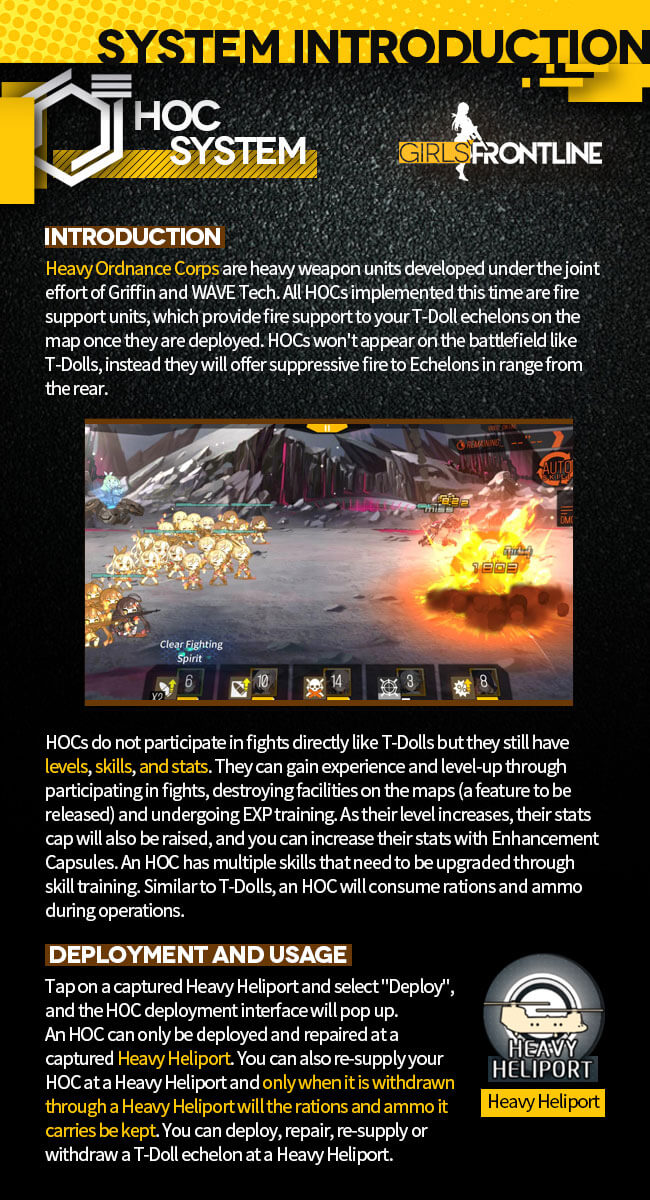 HOCs gain EXP as though they were a T-Doll with 1 Dummy Link, and their experience requirements are higher than that of T-Dolls.

This compounded with their high resource usage means leveling HOCs via combat is not recommended. Writing and using Special Combat Reports is the way to go. 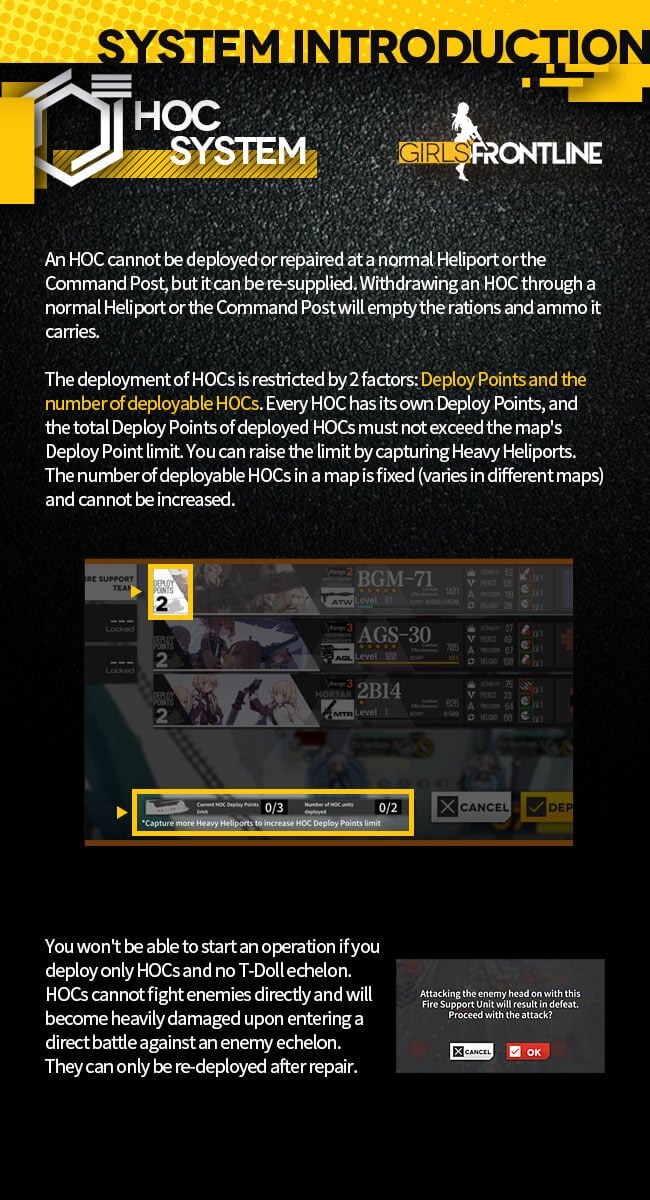 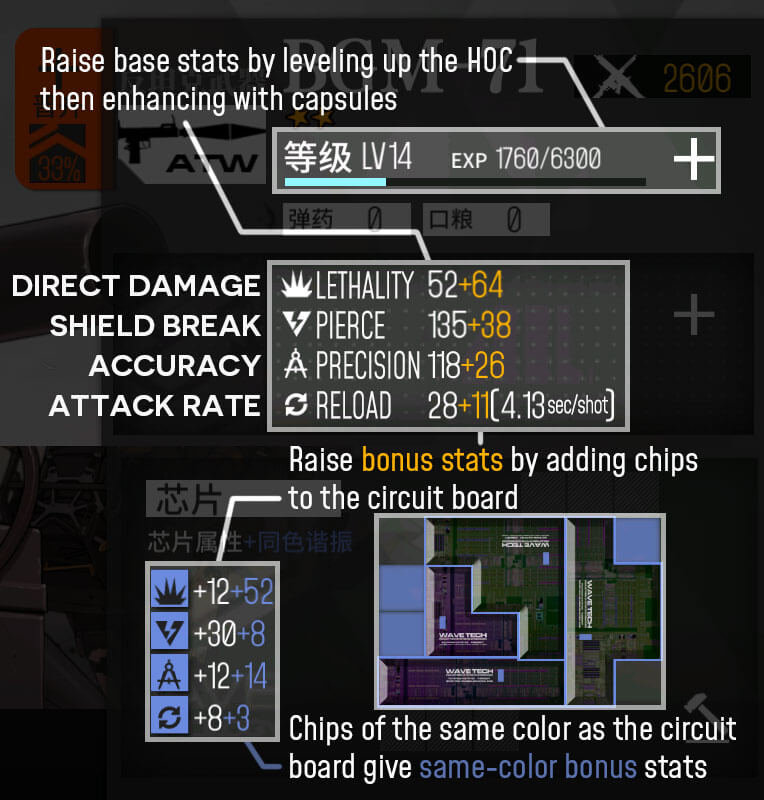 These stats can be raised in a variety of ways:

These mechanics are nontrivial, so we'll skip over them for now. They are explained in detail in the two other subguides in this series.

I have strong Echelons, do I still need HOCs?

HOCs are definitely a hassle to deploy and they are not even available on all maps. Add that to the fact that most of GFL EN has already beaten Chapters 9 and 10 without HOCs, it may seem like HOCs aren't necessary at all.

Unfortunately, MICA Team is essentially forcing the player's hand with a new mechanic that comes with Continuum Turbulence, Force Shields.

Some enemies in the upcoming event will have a Force Shield value denoted by a white segmented gauge below their HP bar, usually between 30-50%.

Each tick of shield gauge corresponds to 10% damage reduction. This is applied after most other damage calculation steps (including Armor reduction). 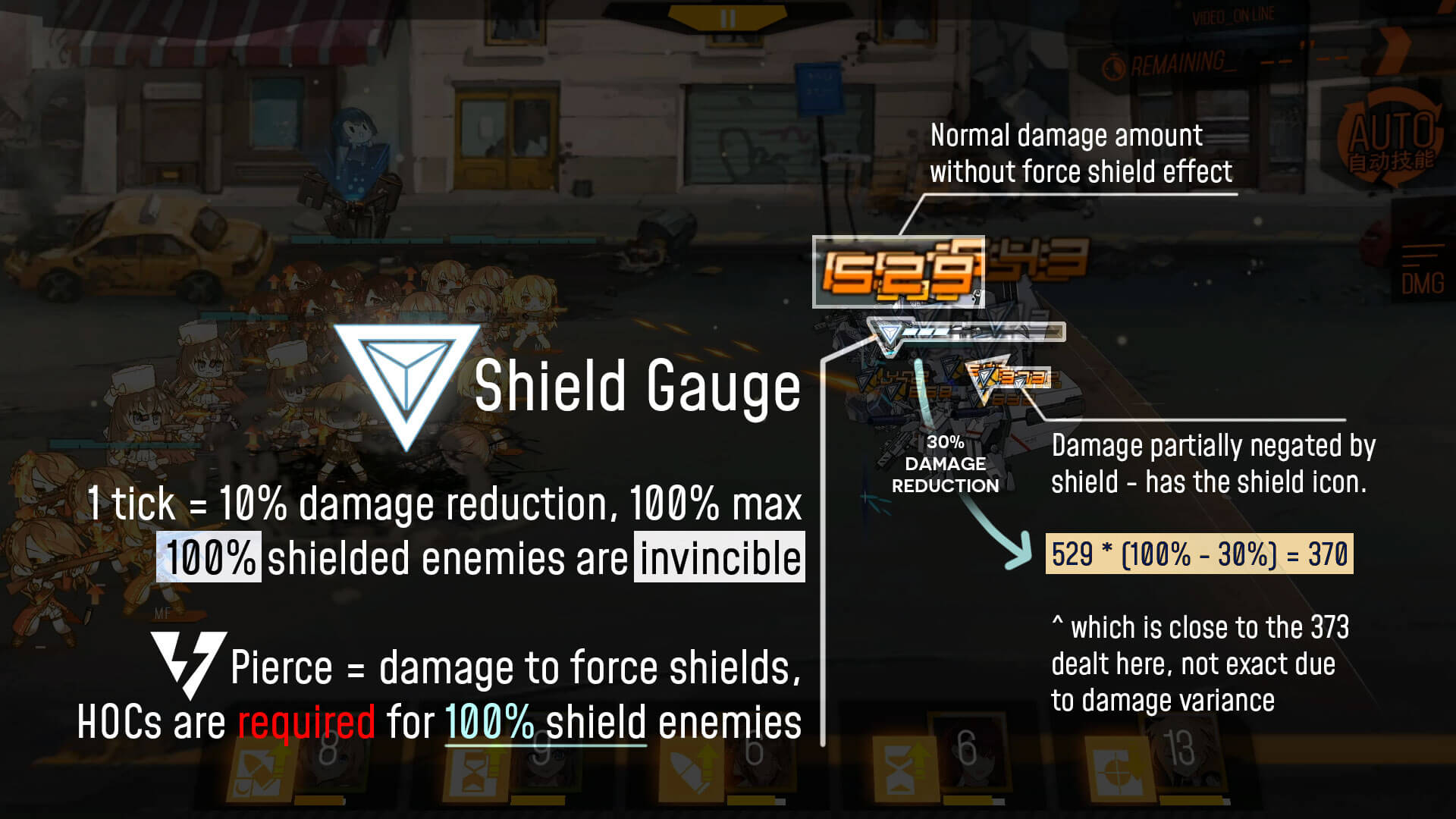 HOCs can reduce enemy force shield value with their attacks. The amount of force shield reduction is determined by the HOC's Pierce stat.

BGM-71 has very high Pierce and is usually the best HOC for this purpose.

While players with extremely strong echelons are able to brute-force partially shielded enemies without much trouble, it becomes very challenging if not impossible when shield gauge is at 80% or above. Fully shielded enemies are completely invulnerable to every source of damage without HOC support, so HOC deployment becomes mandatory against them.

Continuum Turbulence marks the formal introduction of a new enemy faction alongside their tough combat units. The same enemies showed up during the VA-11 HALL-A Collaboration Event as "White Knights", though this time they will be much tougher and come with the aforementioned Force Shields.

Detailed coverage is provided by Ceia in the Continuum Turbulence Preparation Guide, so this page will provide a simple recap.

Recall that HOC units are extremely costly to field thanks to their heavy resource consumption. Players should therefore only deploy their Heavy Ordnance Corps units when their presence is absolutely required.

The scenarios in which deploying a HOC can be worth the cost are covered below:

HOC units provide Support Fire to combat echelons within their range. For a refresher, check the official infographic below: 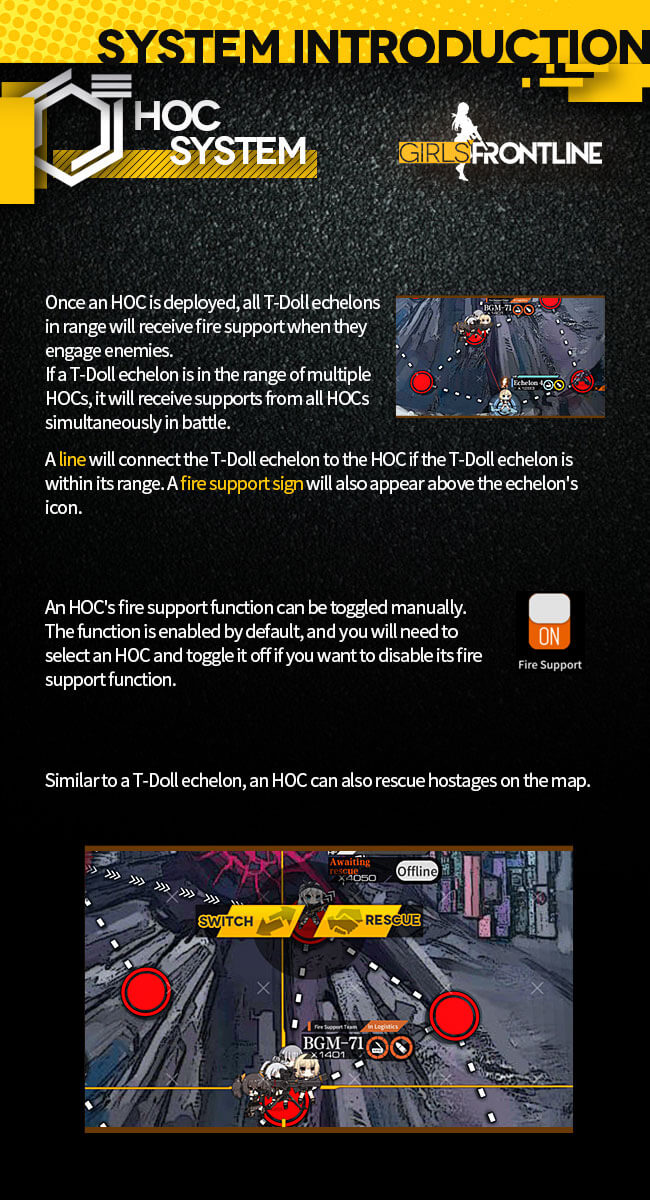 When Force Shields are present, the answer is simple: send BGM-71 to break them.

AGS-30 can also be used, though her 3 range comes at the cost of lower shield-breaking effectiveness.

When Force Shields are not present, the effective value of HOCs is often greatly diminished, especially earlier on when players haven't had enough time to raise their HOCs' rarity and chip stat bonuses.

2B14 is an exception to this rule of thumb, however - while she has a low Pierce stat and isn't great at dealing with Force Shields, 2B14 makes up for it with her incredible Lethality stat and a skillset tuned for massive AoE damage, greatly surpassing the output of even a maxed out Airstrike Fairy.

Since HOCs are timegated, it'll take a while for players to raise their 2B14 to her max potential. Nevertheless, even at low rarity the support fire from 2B14 can be appreciated, especially for echelons that both need a source of sustained AoE damage and the protection of Taunt Fairy.

Starting in Continuum Turbulence, structures are added to the map as a new feature. They will often be enemy installations that impede your gameplay in some way, consisting primarily of the Missile Launcher and Anti-Air Platform. 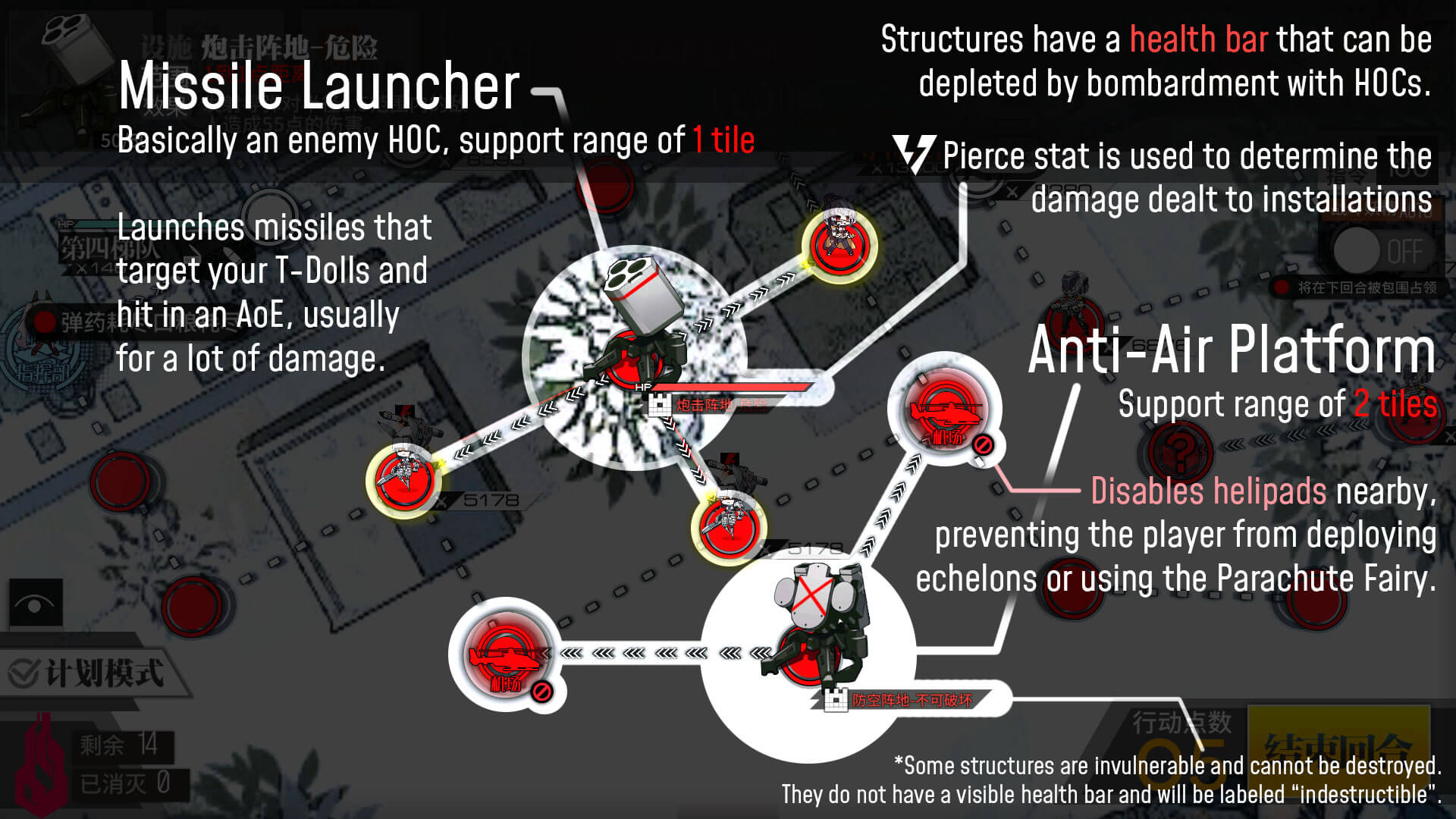 Disabled Helipads still grant Action Points when captured, can be used for emergency repairs, and player echelons are still able to resupply from them.

The function of minor installations like the Control Tower will be explained in the chapter clear guides for Continuum Turbulence when they show up.

One important feature of HOCs is their ability to target and damage an enemy installation with direct fire to damage and destroy them; this does not consume Action Points, but will consume Ammunition and Rations.

Since damage dealt scales with the HOC's Pierce stat, BGM-71 is the most effective for structure demolition, with AGS-30 being a possible alternative when her 3 range is needed.

Alternatively, if a player echelon walks onto the tile containing an enemy installation, it will be instantly destroyed.

The Missile Launcher is like an enemy HOC and will devastate your echelons with AoE fire. If possible, it is highly recommended to destroy enemy Missile Launchers before fighting within their support range.

See the main guide's FAQ section for anything not answered below. If it's not there, feel free to ask in the Comment section below or the forums!

It is not always possible to immediately deploy a HOC on every map, so players may be forced to deal with them. Sometimes on maps with strict turn limits like the Ranking Map, the gains from saving AP (by not moving a HOC to kill the missile launcher) outweighs any additional damage that the player takes.

I have to fight shielded enemies but I don't see a way to deploy HOCs! What should I do?

Similar to the previous question, this is intended and the shielded enemies will often have a relatively low shield value (30-50%), allowing a strong player echelon to defeat it without HOC assistance.

Note that after Continuum Turbulence there will sometimes be maps containing 100% shielded enemies and no way to deploy a HOC; those enemies must be avoided at all costs as there's no way to defeat them.

My HOC died! Where do I go to repair it?

Go to the Garage (new dorm facility) and select the Maintenance Machinery. 10 Quick repair contracts can be used to instantly complete the repair.