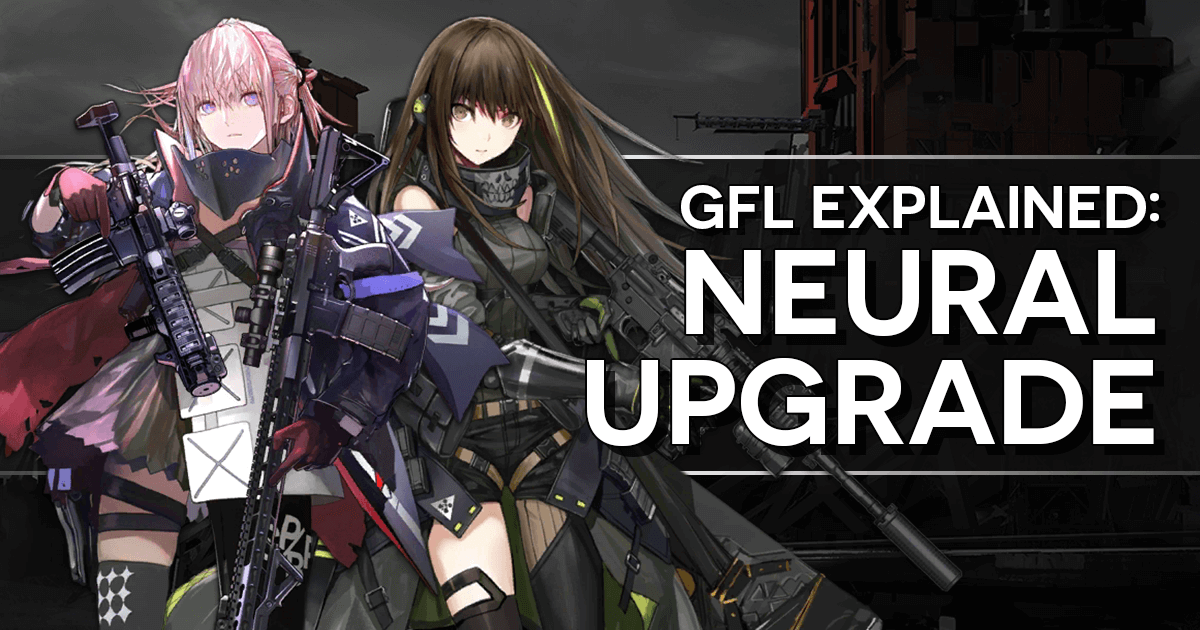 What is the Neural Upgrade system? 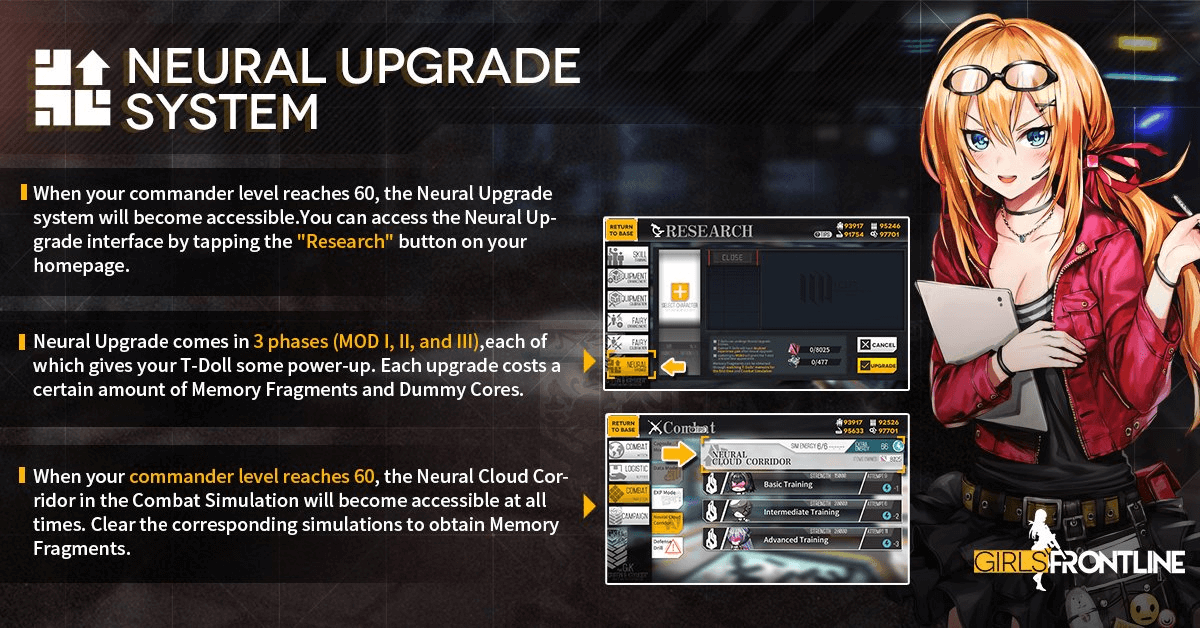 The Neural Upgrade system, also known as Digimind Upgrade or sometimes simply as a remodel (Mod), is an upcoming mechanic for Girls’ Frontline EN that is expected to be released late September.

The Neural Upgrade option allows certain T-Dolls to be enhanced beyond their normal limits, which improves their level cap, rarity, and stats, on top of unlocking a second skill at Mod II. Furthermore, any T-Doll upgraded to the maximum tier (Mod III) will receive new in-game art, updated voiceovers, and a unique special equipment.

Receiving a Neural Upgrade is a big deal for any T-Doll, as her performance can tremendously improve after undergoing the Upgrade. The pool of eligible units on EN started with the three Neural Upgrade Voting event winners — M1911, M14, and G36 — with additional batches of three or four units added to the game once every few months.

Check out the excellent page below made by Girls' Frontline Corner! 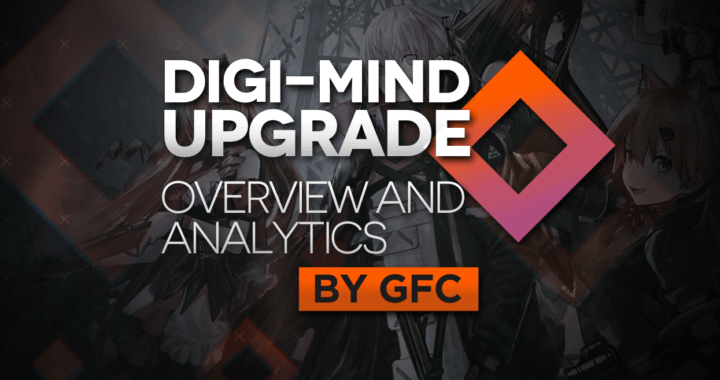 Where is Neural Upgrade performed?

While Neural Upgrade has not been released on EN at the time of writing, astute commanders may have noticed the presence of a greyed-out option in the Research menu hinting at the eventual release of this feature. 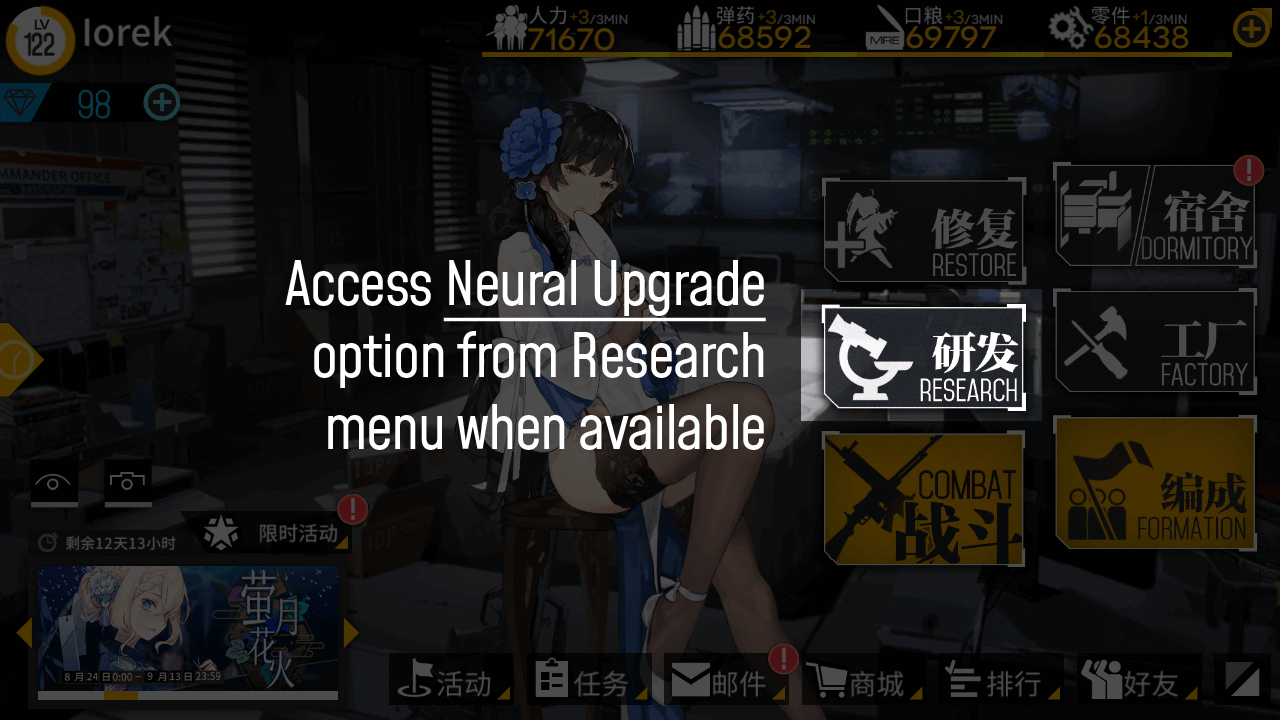 After official in-game launch of this feature, the Neural Upgrade tab will be enabled, and commanders who navigate there will be greeted with a familiar T-Doll selection panel. 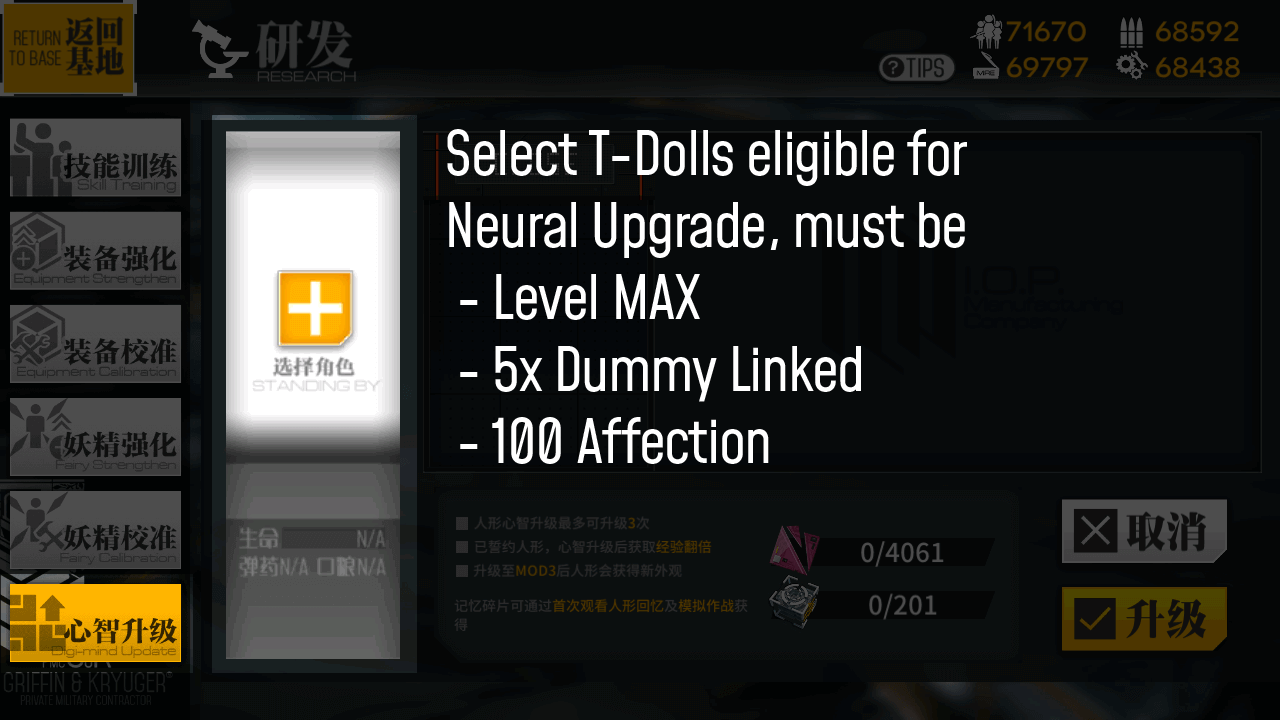 Only units who have a potential Neural Upgrade will be possible to select, which makes it a very small list for EN at feature launch. On top of that, the T-Doll must: 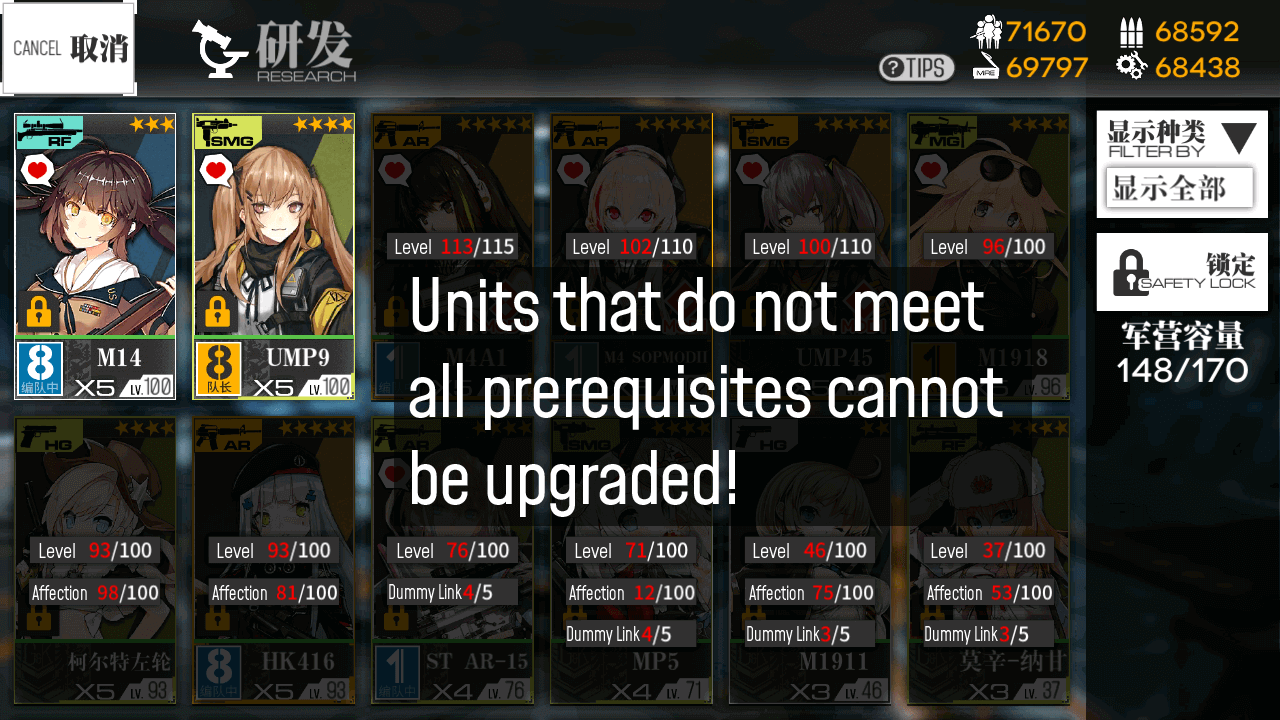 With any prerequisite not satisfied, Neural Upgrade is not possible. 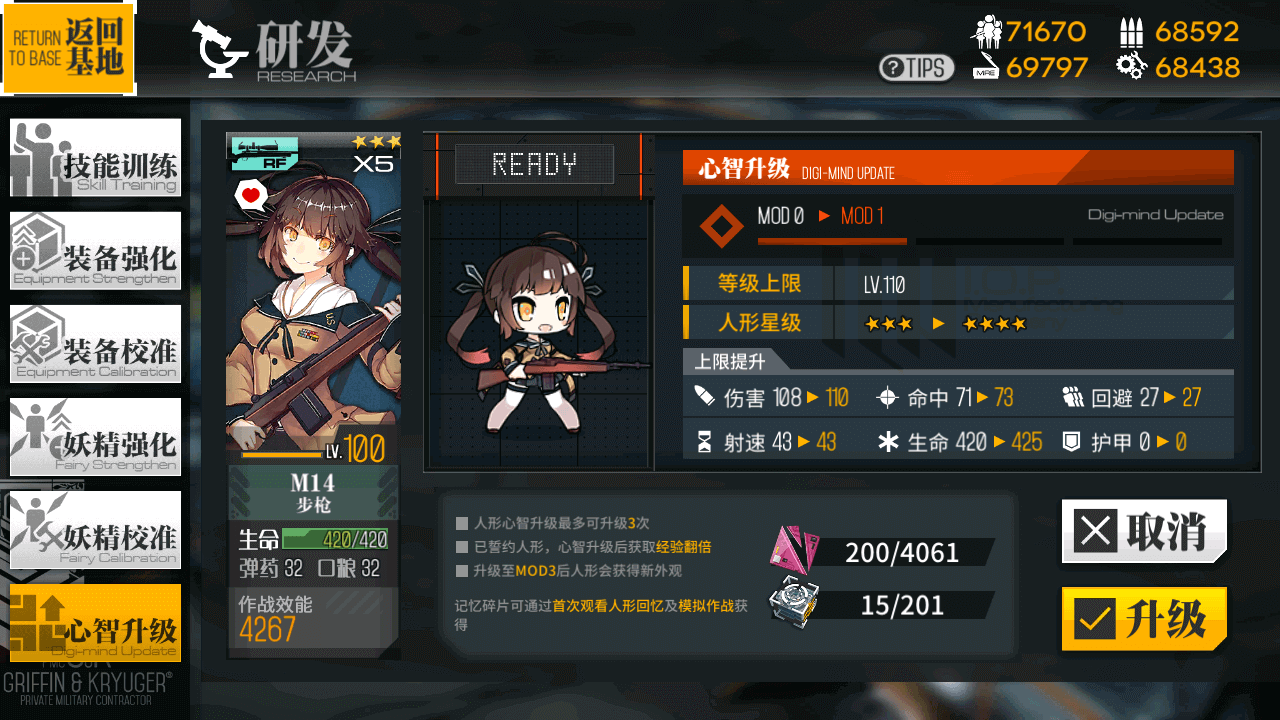 After an eligible unit is selected, the commander is presented with a screen showing effects of the Neural Upgrade, including:

However, this process is not free; the resource cost of performing an upgrade is shown at the bottom near the confirm/cancel buttons, in M14’s case costing 15 Dummy Cores and 200 of a new item, Memory Fragments.

Memory Fragments can be earned in a new type of Combat Simulation, Neural Cloud Corridor, and are specifically used for Neural Upgrade.

Like the Neural Upgrade menu option, a greyed-out tab for the Neural Cloud Corridor has been in the EN client for quite some time now. This specific Combat Simulation will unlock at Commander Level 60. 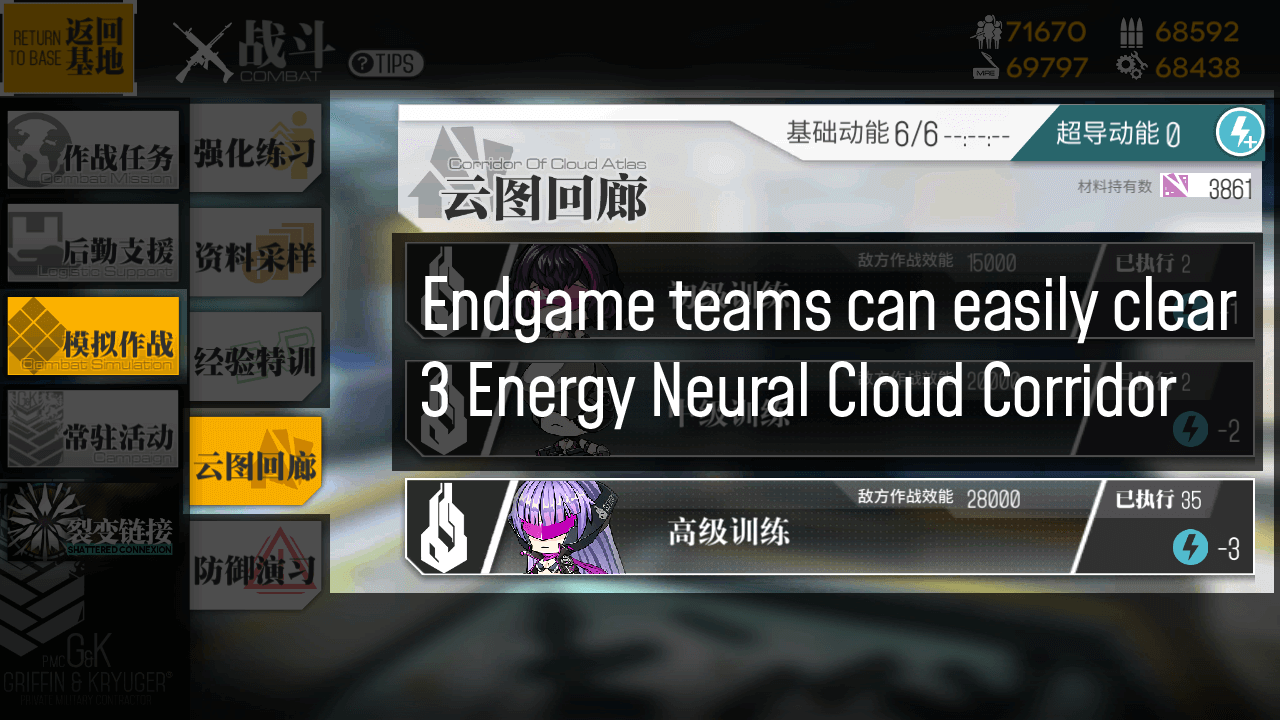 As Neural Upgrade is a late-game feature, commanders are recommended to ignore the two lower tiers of Neural Cloud Corridor and simply go for the highest level one, as their echelons at this point should have no trouble with the simulation. 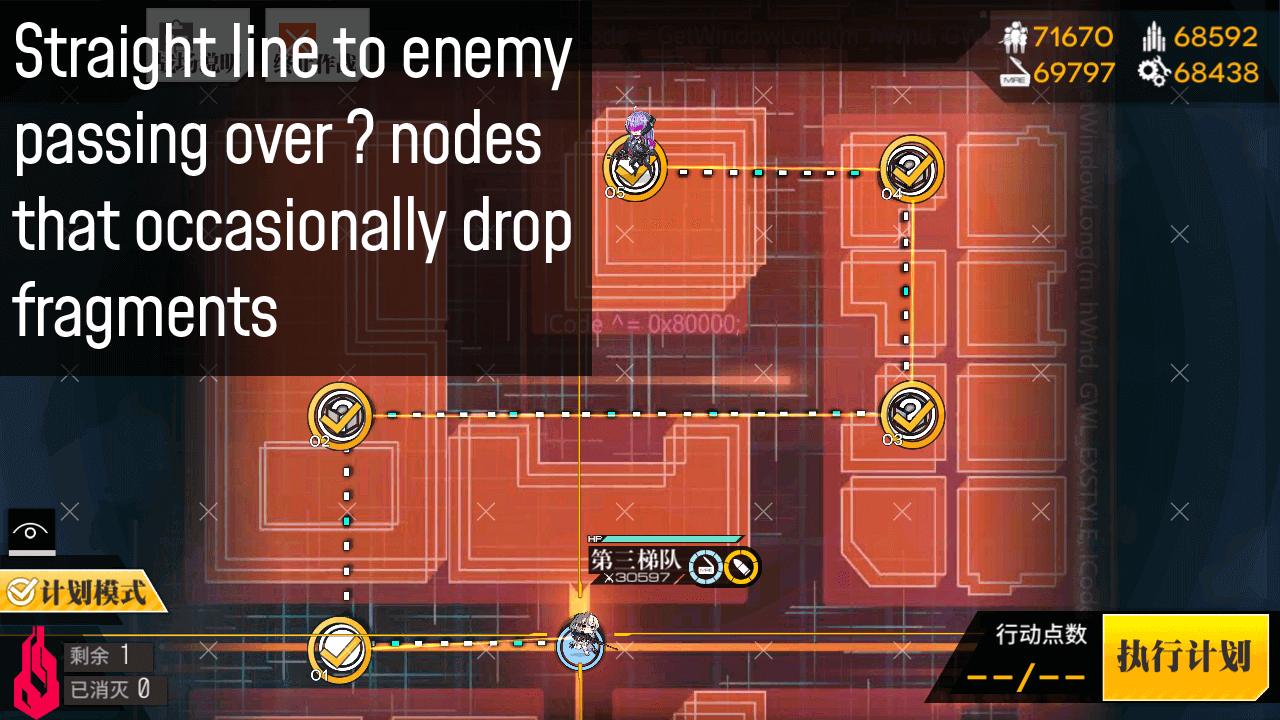 Neural Cloud Corridor can be considered a fancier version of the Enhancement Capsule Combat Simulation, with three tiers that are essentially the same deal of walking through ? nodes before killing a single enemy group for the rewards. 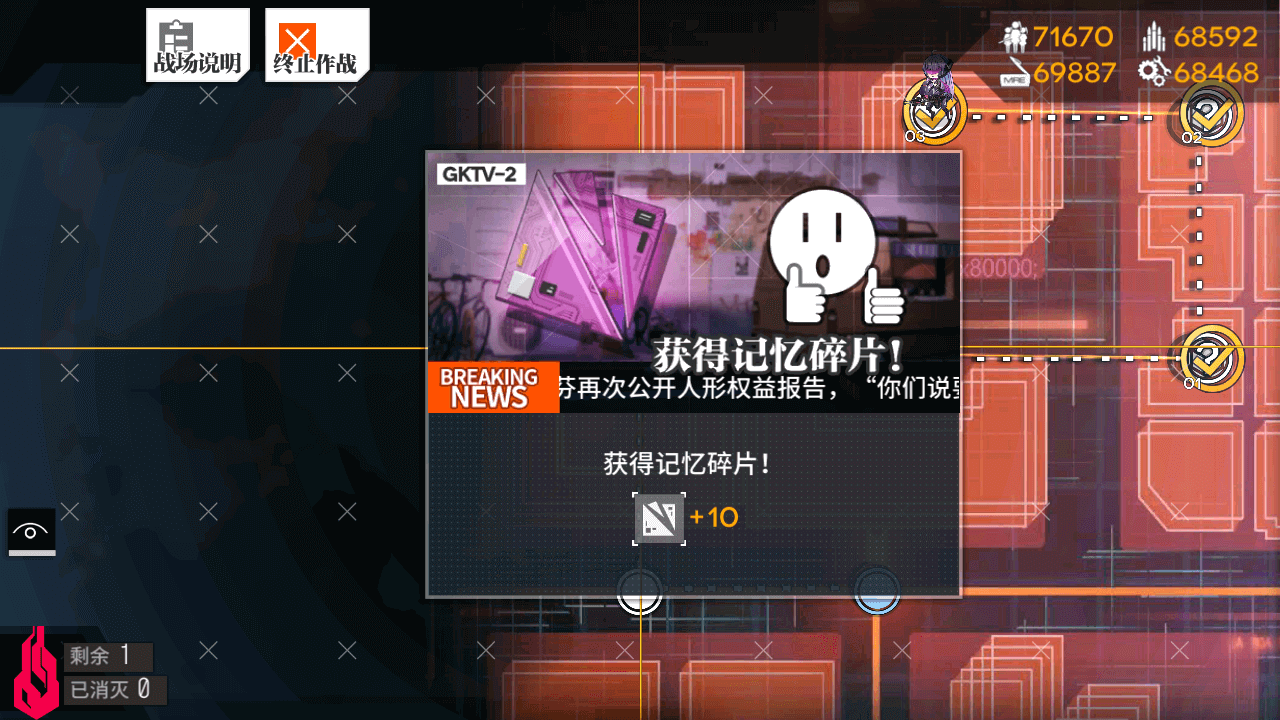 The ? nodes may either award varying amounts of resources or 1- Memory Fragments, similar to the Enhancement Capsule Combat Simulation ? nodes that yield either resources or enhancement capsules. All possible outcomes are positive. 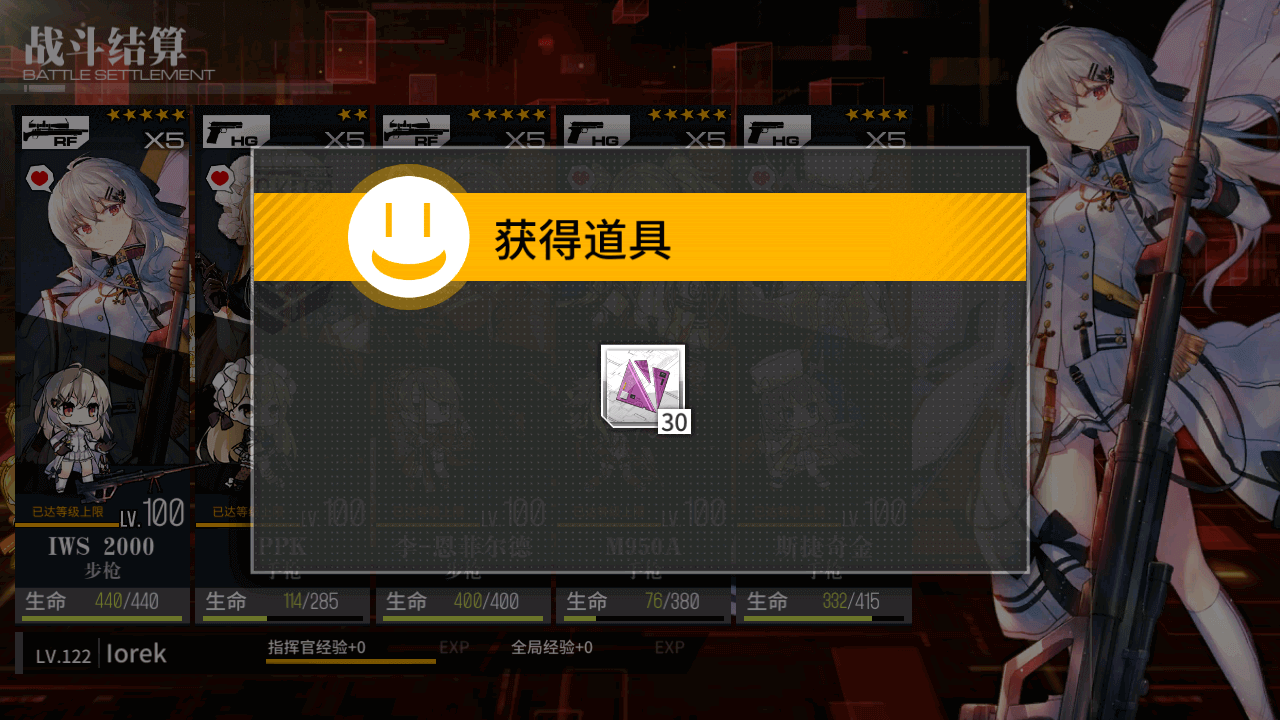 The final fight is a quick brawl against some Brutes, Dragoons, Jaegers, and Jaguars. Despite the intimidating-sounding enemy DPS units, the lack of tanky enemy units such as Scouts or Guards makes this fight much easier than it seems on paper. Any level 90 5x dummy linked team should have no trouble taking down the final enemy to earn 30 Memory Fragments, completing the simulation. 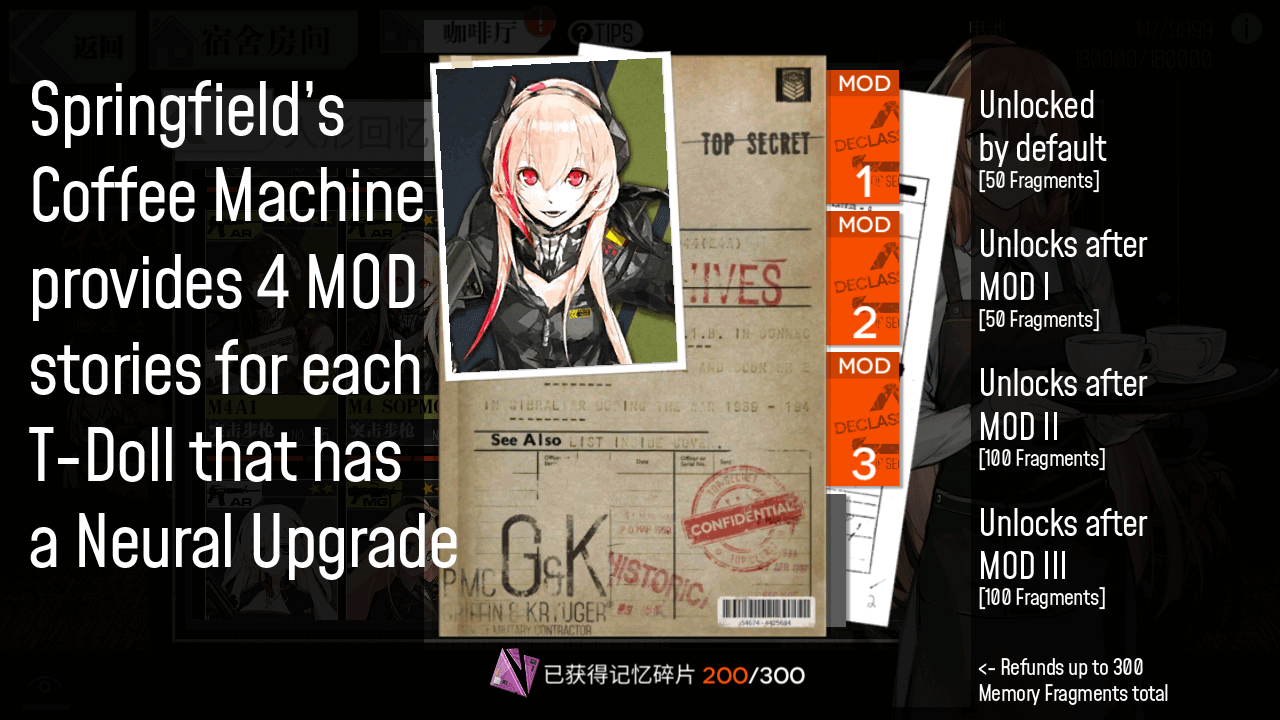 As at least 3 units will be released in the first Neural Upgrade batch, commanders can expect to receive at least 150 free Memory Fragments on release day. Please look forward to the stories, as they’re quite well-written and will be a treat for anyone interested in the lore.

After Neural Upgrading a level 100 T-Doll, she becomes “Mod I”, gaining a new level cap of 110 and an upgrade to their rarity. 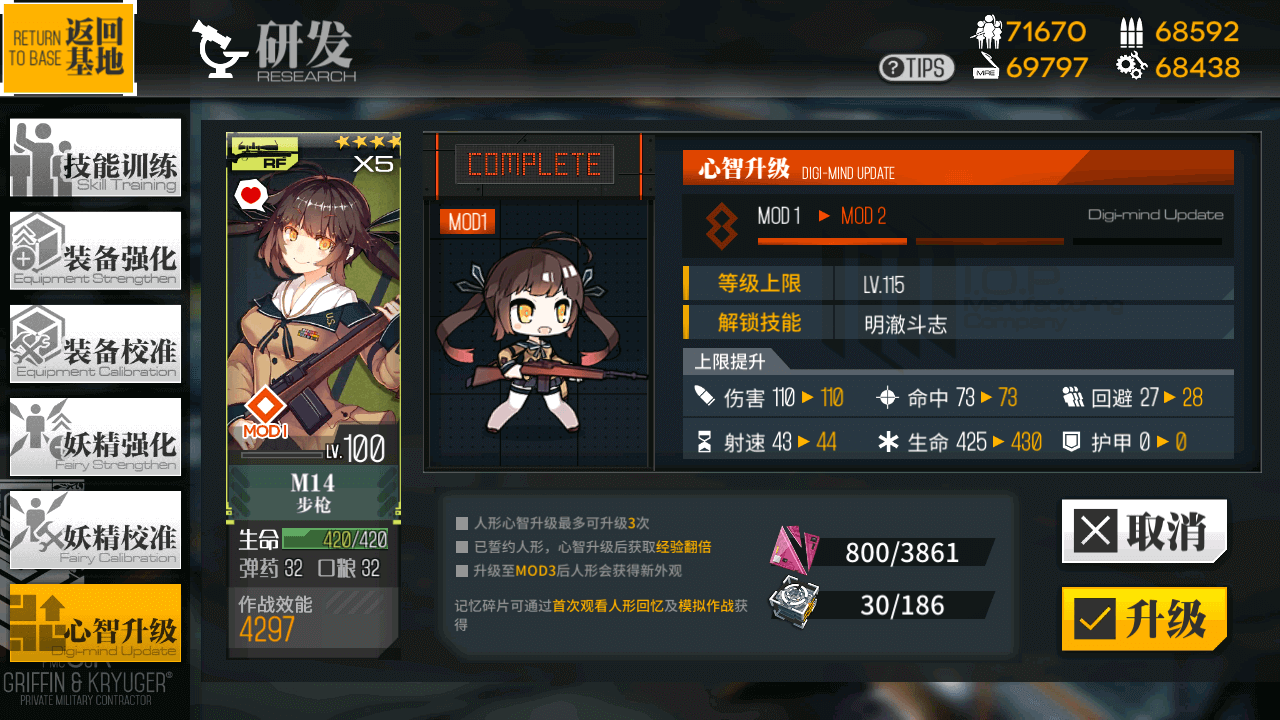 This rarity increase affects the T-Doll’s skill multiplier, for example increasing M14’s Damage Focus boost from 60% to 65%. Tile buff potency also increases to match her new rarity, reducing HG cooldowns by 15% instead of 12%.

Additional tiles are also occasionally added to a T-Doll’s buff formation if their previous coverage was poor, such as G3’s Mod granting her an additional forward-facing tile.

Commanders can halve the amount of grinding or combat reports needed by establishing an Oath with the T-Doll, which doubles her experience gained from combat and Combat Reports after level 100.

After Mod I comes Mod II, an even further upgrade that bumps the level cap from 110 to 115 and unlocks the T-Doll’s secondary skill, or Skill 2. This upgrade is substantially more expensive than Mod I, costing five times as many Memory Fragments in M4 SOPMOD II’s case. 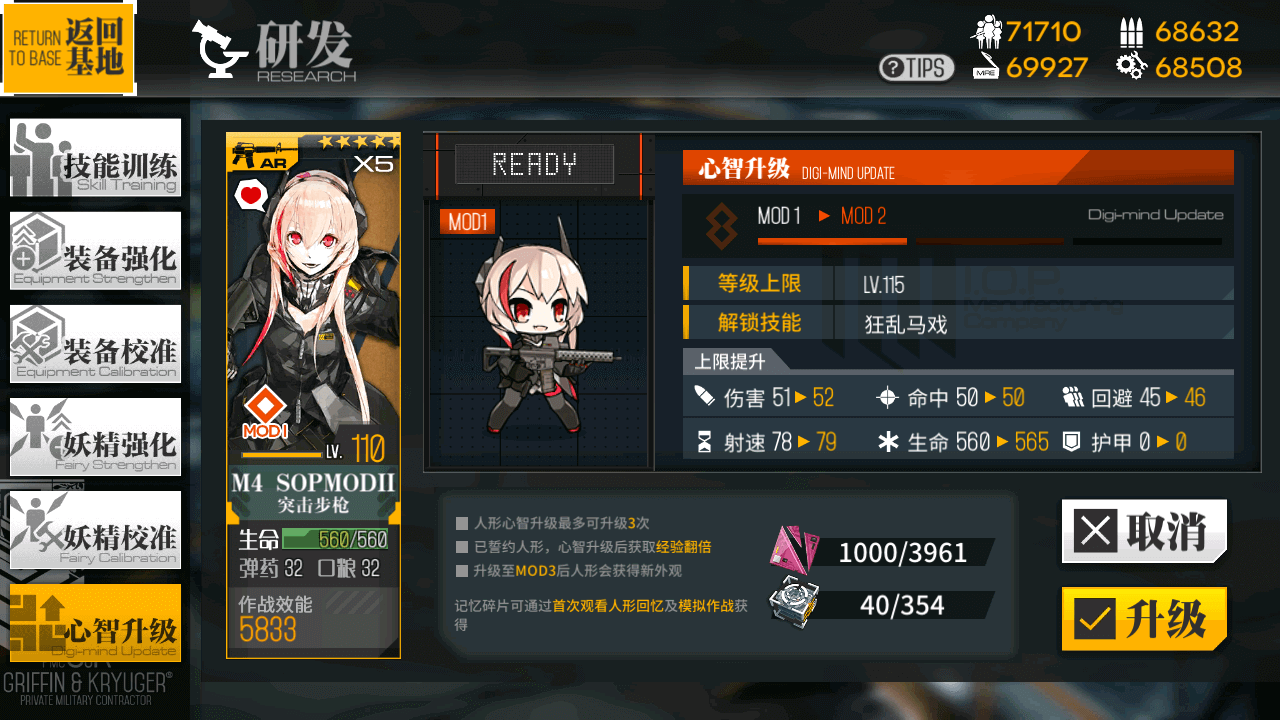 This additional skill is not activated separately, and is either an effect that is tied to the activation of Skill 1 or a permanent, separate passive boost. For example, M4 SOPMOD II Mod II’s Skill 2 modifies her grenade so that it splits after detonation, while SAA Mod II has a secondary skill that simply adds a passive buff to her teammates over time, independent of her Damage Focus skill. 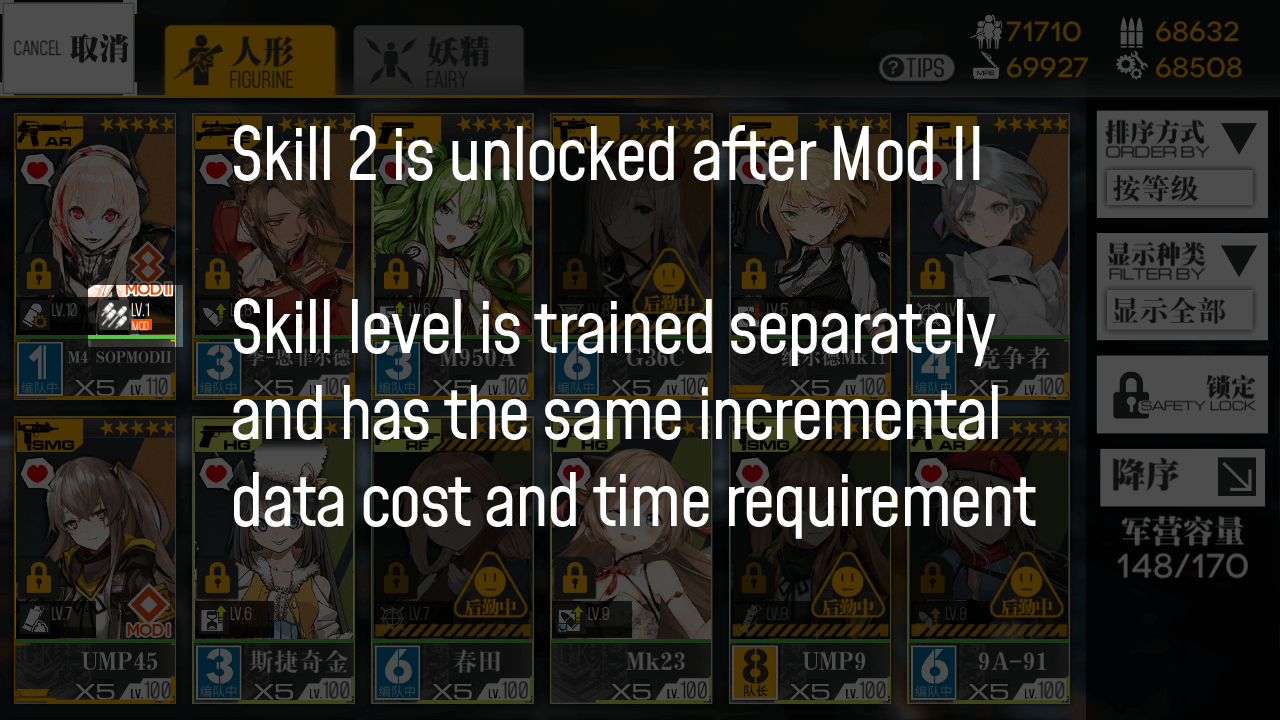 The newly unlocked Skill 2 starts at level 1 and must be trained, similar to the first skill. The Training Data costs and time required (scaling up to 24 hours for the last level) are the same per level.

The final upgrade available to T-Dolls with a Neural Upgrade option, a Mod III upgrade unlocks the final level cap of 120, new in-game art and voiceovers, as well as a unique special equipment for the T-Doll. Notably, if an Oath has been established with the Mod III T-Doll, her Affection cap increases to 200 (from 150), with an additional 5% gain in stats at 190 Affection for a total of 15% increase to DMG/ACC/EVA compared to 5% without Oath.

As the final upgrade, Mod III also costs the most out of all the tiers, requiring 100% more Memory Fragments and 50% more Dummy Cores than Mod II. 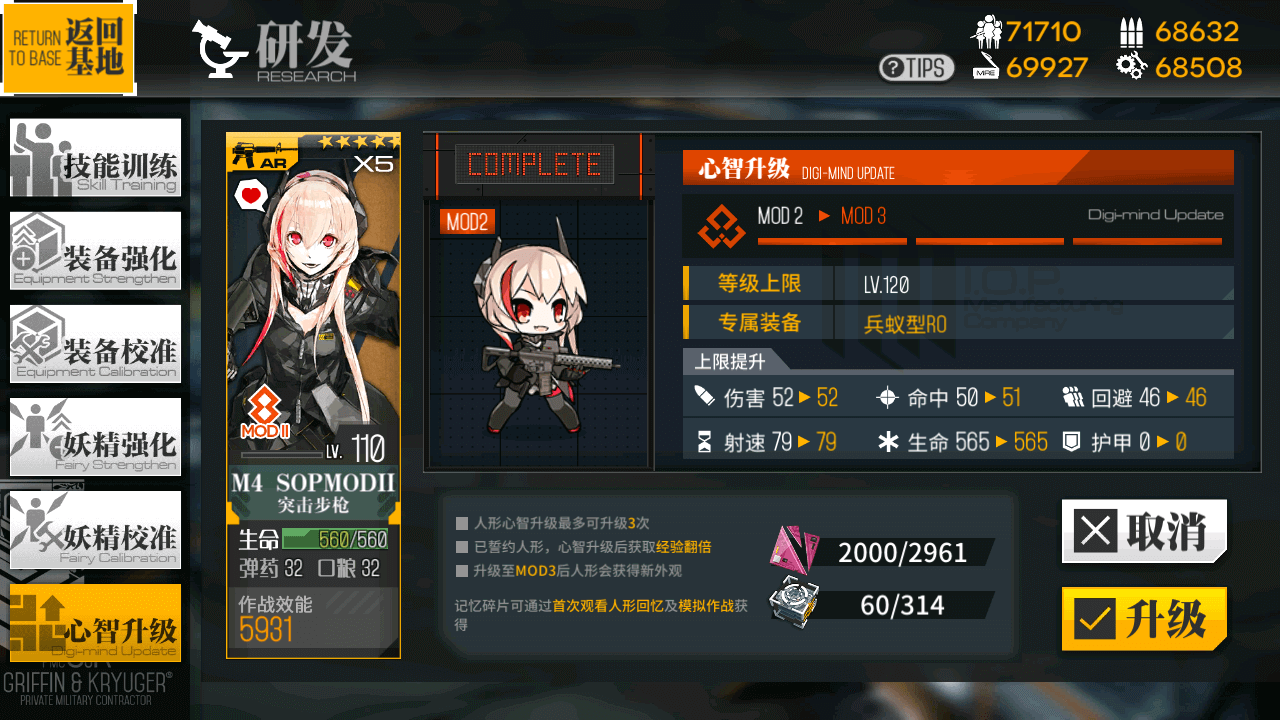 One notable challenge commanders may face after the Mod III upgrade is the experience requirement of 27,020,000 to reach the T-Doll’s new level cap of 120, which is over 13.5 times the XP needed from level 100 to 110. As many T-Dolls gain important single points in their stats at some point between Levels 115 and 120, commanders who want perfect stat maximization are in for the long haul when faced with Mod III’s incredibly steep XP curve.

For commanders wishing to minimize grinding, the following chart may be of use. Shown values indicate the level at which the corresponding T-Doll reaches their maximum stat cap for the corresponding stat. Values under 115 indicate that the T-Doll’s stat cap is not meaningfully increased from level gain post Mod III.

5★ Neural Upgrades such as the one for NTW-20 will require another item, Fire Control Component (FCC or IFCC) that is purchasable twice per month through the Expedition Black Market or events (typically awarding 10 per clear). Discounting event drops, 5 months of expedition drops are needed per 5★ Mod.

For commanders with a large number of stocked Combat Reports that want to assess their ability to rapidly level up remodeled units, here’s a quick reference chart of Combat Reports required to level units:

For a rough ballpark approximation of number of 0-2 runs required if grinding manually, take half the number of combat reports required. The exact run count will vary slightly as each 0-2 run provides 7350 XP (~2.45 combat reports) before level 112, and 5880 XP thereafter.

Where else can Memory Fragments be obtained?

Aside from the Neural Cloud Corridor, Memory Fragments can be obtained from events, the expedition system, as well as the Coffee Machine in the Cafe.

When will AR Team/404 receive their Neural Upgrades?